Riot Blockchain’s bitcoin production numbers in September quadrupled year over year as the mining company has so far produced nearly 2,500 BTC in 2021. Last month, the Colorado-based miner produced 406 bitcoins and now holds 3,534 BTC, all made by its mining operations.

The US Department of Justice Sets Up a Crypto Team

The platform combines both IDO and young first projects with community members through capital increase and valued members of the community to invest in the developer's fair for ideas, token-based and accessible environment.

Massive Buyers on CME Might Be Front-Running Bitcoin ETF Approval, According to Analysts

Dylan LeClair, co-founder of the cryptocurrency consulting firm 21st Paradigm, noted that the goal of CME Group's futures investors may be to buy the expected approval of the Bitcoin ETF in the United States from the front.

After the price rise of Bitcoin yesterday, the market value again rose above $1 trillion, opening a significant threshold.

Dawn Fitzpatrick, CIO of the Soros Fund, which manages the personal capital of billionaire George Soros who is famous for his donations to the Democratic Party and support for liberal ideas, explained in an interview with Bloomberg that the fund has "some crypto money" and is looking forward to exploring the DeFi industry.

Bitcoin lost a 0,30% value during morning hours; the current price is $55.143. After the price rise of Bitcoin yesterday, the market value again rose above $1 trillion, opening a significant threshold. The positive news will affect Bitcoin prices in the medium term. Dawn Fitzpatrick, CIO of the Soros Fund, which manages the personal capital of billionaire George Soros, explained in an interview with Bloomberg that the fund has "some crypto money" and is looking forward to exploring the DeFi industry.

When we consider the BTC/USDT parity in technical terms, having broken the last downward trend on October 5, BTC crossed the April 14 ($64.899) and September 7 ($52.944) peak levels, and retested the trend successfully yesterday. Bitcoin, which rose again with the support from the trend, experienced rapid rises in a short time along with positive news flows. Our next price target for Bitcoin, where we have not seen any reversal signals in the daily and short-term charts, is near $58.335, a significant resistance level in the weekly chart. 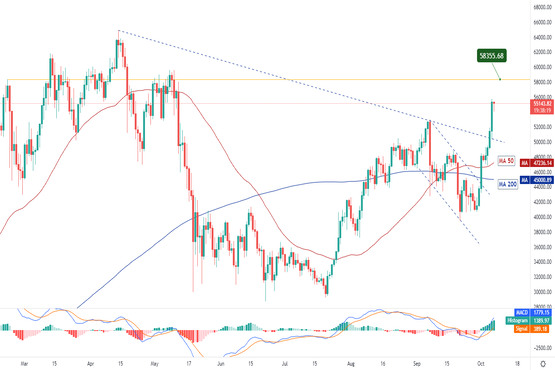 Ethereum lost a 0,90% value during morning hours, and the current price is $3541,53. ETH, which began to rise throughout the market, limitedly moved compared to the captain Bitcoin. Due to the approval of the Bitcoin ETF expected in October, we see pressure on the altcoin potential rise as eyes are turned to the captain. We suppose that this situation will not last very long, and altcoins will outperform Bitcoin.

When we consider the ETH/USDT parity in technical terms, ETH scared the investors with intraday loss, retreated near the $3327 level (50-day moving average), and is priced with the level support upwards. In the daily chart, MACD continues to give a buy signal. We expect that the ETH rise will continue towards the level of $3670. 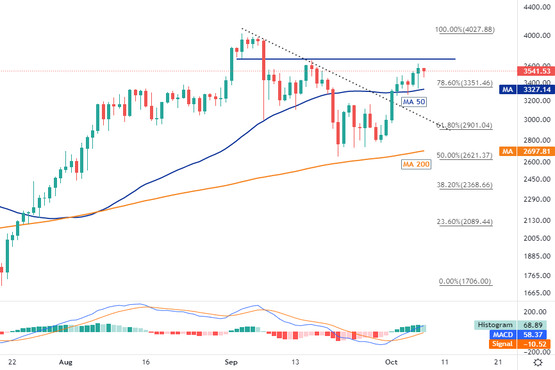 AVAX lost a 1,00% value during morning hours, and the current price is $59,41. When we consider the AVAX/USDT parity in technical terms, AVAX broke its upward trend that existed as of September 13 in a downward direction yesterday and closed the day below this level. In the daily chart, there is a head and shoulders formation is targeting $50,71 (Fibo'50). AVAX should be followed near the support level of $55 (50-day moving average). 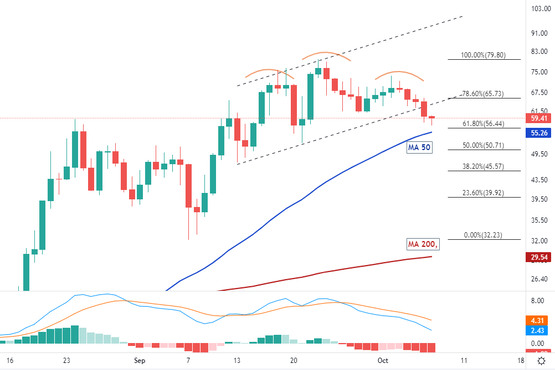 Ripple lost a 0,60% value during morning hours, and the current price is $1,070. The National Bank of Qatar (QNB) is launching a wire transfer service in partnership with Ripple to improve cross-border payments by reducing transaction delays for QNB customers. For Ripple, which continues to work with large institutions, such news feeds will positively affect the XRP price in the medium term.

When we consider the XRP/USDT parity in technical terms, the buy signal from stochastic continues in the daily chart of XRP, which rises again with the support found near the $1 support level on October 4. XRP, moving towards the level of $1.10 (50-day moving average) is expected to accelerate along with the upward break. This break could trigger a rise towards the $1.30 level. 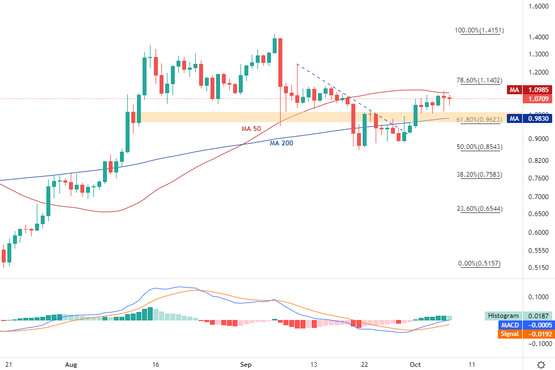 LTC lost a 0,25% value during morning hours; the current price is $177,8. When we consider the LTC/USDT parity in technical terms, having fallen to the support level of $165-170 daily, LTC broke the $175 ( 50-day moving average) level upwards, by wiping its daily losses along with the positive price movements in Bitcoin. LTC, which closed the day above the 50-day moving average, retested the $175 level this morning as the following support line. In the daily chart, metrics are positive. We expect the rises to continue towards $190 in the short term, equivalent to the 200-day moving average. 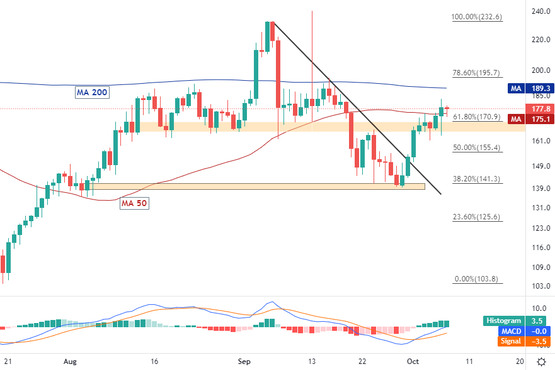 LINK lost a 1,60% value during morning hours, and the current price is $26,31. When we consider the LINK/USDT parity in technical terms, LINK, which closed yesterday below the 50-day moving average of $26.95, started the day with declines. We suppose that with the upward break of the resistance line hitting the 200-day moving average, LINK, which continues its horizontal price movement, will resolve sales pressure and begin to rise. 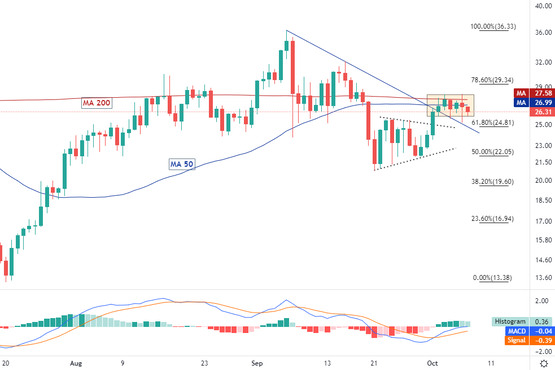 BAT lost a 1,60% value during morning hours, and the current price is $0,722. When we consider the BAT/USDT parity in technical terms, BAT dropped sharply, like the other altcoins. BAT had broken the intraday support levels downward. After the total market's recovery, BAT could break all the support levels upward. The BAT, which retested the $0.72 level at the start of the day, has found support from this level. If Bitcoin does not retreat sharply, our price target prediction for BAT is still $0.84, along with the break of Fibo'61,80. 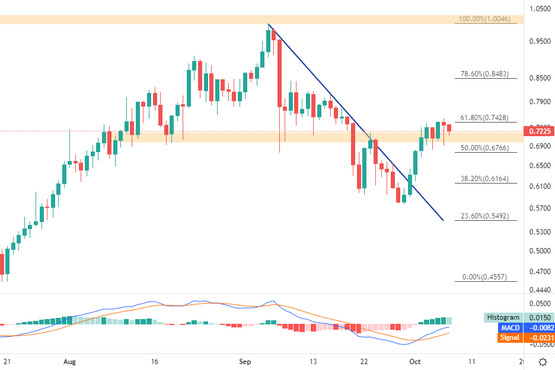