The seven-time Super Bowl winner and Tampa Bay Buccaneers' playmaker Tom Brady is willing to receive part of his salary in cryptocurrency.

In a press release issued on September 16, Revolut said it had become the world’s first provider of prominent WeWork flexible spaces “the first corporate member to sign a new space using cryptocurrency.”

Bitcoin mining company Genesis Digital Assets based on Island said on Tuesday it had raised $431 million in a strategic funding round led by crypto-focused investment firm Paradigm.

Powell: Guidance around Fed Tapering Could Come at the Next Meeting

While the Federal Open Market Committee (FOMC) kept interest rates near zero and maintained its asset purchases, Chairman Jerome Powell said considerations around tapering “could come at the next meeting.”

According to the Bloomberg Intelligence Commodity Strategist, Mike McGlone, the United States Securities and Exchange Commission (SEC) has been waiting for a long time Bitcoin ETF approval may come soon.

Bitcoin lost 1,40% value during morning hours; the current price is $44.166. While the Federal Open Market Committee (FOMC) kept interest rates near zero and maintained its asset purchases, Chairman Jerome Powell said yesterday considerations around tapering “could come at the next meeting.” After this positively affecting new flows, sharp rises have been seen in the cryptocurrency markets.

When we consider BTC/USDT parity in a technical sense, having recovered rapidly after the FED meeting, Bitcoin broke the $42.235,33 level upwards again found at Fibo'61,80 tranche, and the downward trend is breached. The transactions volume stands above the average and in the bullish direction, and in the 4-hour chart, the MACD gives buying signal. If a negative news flow does not come up from China, the short-term price target for BTC is $45,739, which coincides with the 200-day moving average. 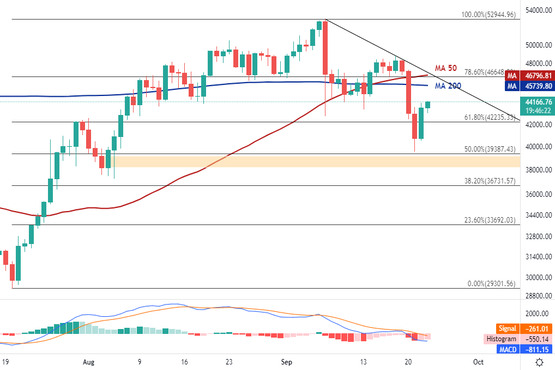 Ethereum lost a 1,00% value during morning hours, and the current price is $3110,28. After the relieved market conditions by the positive news flow form FED, Ether increased about 12 percent yesterday. We see the metrics recovering again regarding on-chain data for Ethereum and the net flow between the wallet and markets. In parallel with recent announcements, we suppose that the ETH held in exchange reserves will continue to fall.

Considering the ETH/USDT parity in technical terms, ETH, which found support at Fibo'50 tranche on September 21, as well as the 200-day moving average of $2621, rose again with this support and yesterday's positive statements. The critical downside price movement below the $2900 level could not be persistent.  In the 4-hour chart, MACD gives a buy signal but in the daily chart, there is an ongoing sell signal. Our next short-term price target for ETH is $3300. 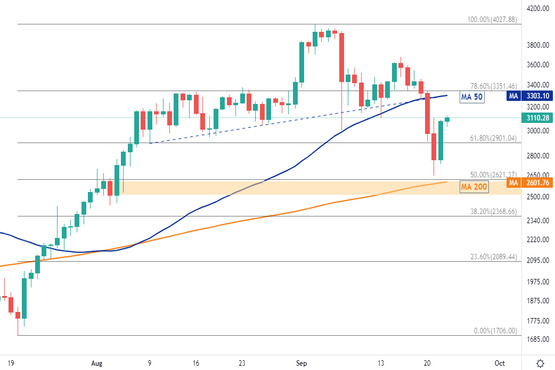 AVAX lost 2,75% value during morning hours, and the current price is $73,43. When we consider the AVAX/USDT parity in technical terms, as we mentioned in the bulletin yesterday, AVAX, which has remained above the $63.43 level, rose again towards the peak level and by that way reached a new peak level at $77.77 yesterday. It is difficult to mention that the rises have ended where we have seen an acceleration in the upward price movement alongside the MACD, which gave the buy signal as of yesterday, in the 4-hour chart. if AVAX closes the day above $76.27, it can lead to sharp rises. 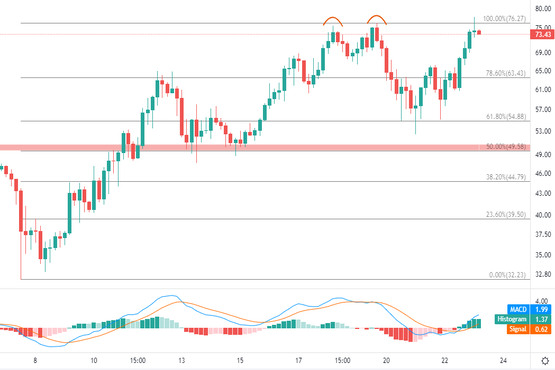 Ripple lost a 0,35% value during morning hours, and the current price is $1,006. When we consider the XRP/USDT parity in technical terms, having broken its 200-day moving average downwards, XRP broke this level again and the 1-dollar-psychological level upwards with a sharp rise of 14.75 percent yesterday. In the daily chart, stochastics has given the buy signal near the over-selling zone. If XRP remains above the $0.9623 level, which coincides with the Fibo'61.80 tranche in the daily chart, the next price target is $1.088. 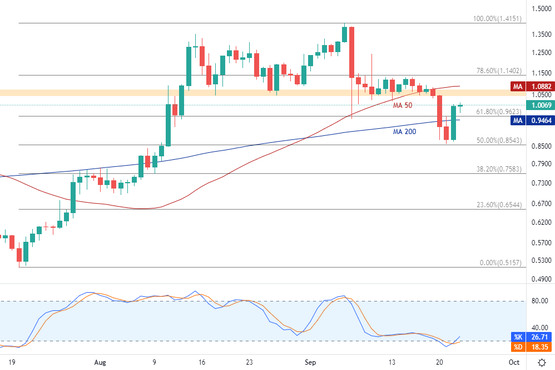 LTC lost 0,2% value during morning hours; the current price is $161,2. When we consider the LTC / USDT parity in technical terms, having broken the $155.4 level downwards on September 21, equivalent to the Fibo'50 tranche, LTC broke this level upwards again with the market recovery of yesterday and closed the day above this level. In the daily chart, there is no turn-back signal. If LTC remains above the $155,4, then the next price target is $171. 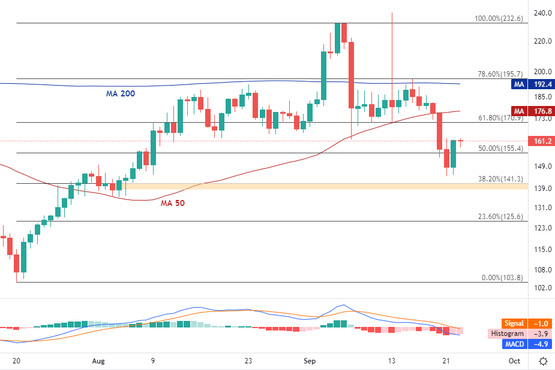 During morning hours, LINK has the horizontal price movement, and the current price is $24.45. When we consider the LINK/USDT parity in technical terms, having made the investor happy with rising about 15 percent yesterday, LINK has reached a significant resistance level at $24.3-24.8. If LINK breaks the current resistance level upwards, receiving buy signals from the oversold zone, the next price target is $27.1. 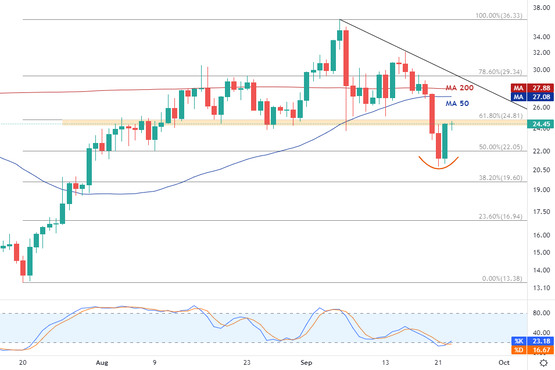 BAT lost 1,05% value during morning hours; the current price is $0,694. When we consider BAT/USDT parity in technical terms, having retreated around $0,60, BAT has found support at this level and rose again and yesterday broke the $0,677 level upwards, equivalent to Fibo'50 tranche. Having closed daily above this level, BAT continues its upward price movement by testing this level amidst the new daily candle opening. In the 4-hour chart, MACD has been giving a buy signal since yesterday. The next major resistance level for the BAT is $0.73, which coincides with the downside trend. 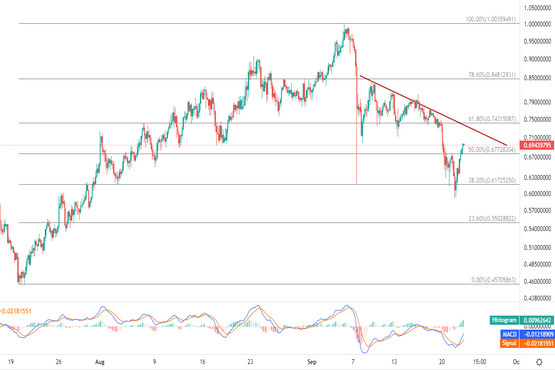