Ripple opens ODL corridor in Japan
Ripple announced the opening of the first demand-bound demand (ODL) corridor in Japan, suggesting that it wants to capitalize on the $ 1.8 billion trading volume between Japan and the Philippines Dec.

Staub, CEO of Vontobel, a major Swiss banking institution, said in an interview that his clients are increasingly interested in cryptocurrencies.

The Central Bank of Estonia, then try some other euro area central banks made with the block chain-based digital euro comment on the scalability of the system can perform per second, more than 300,000 stated.

New investment from BIT mining to its headquarters in Kazakhstan

Bit Mining, a China-based mining firm, has bought an additional 2,500 mining machines at its data center in Kazakhstan.

Bitcoin, which moved horizontally in the morning, is priced at $ 40,047. At yesterday's FOMC meeting in the US, there was no interest rate change as expected. While the rhetoric in the statement by Fed Chairman Powell is based on market relief, the US side will need to closely monitor inflation and employment data for some time to come. When we analyze the Bitcoin chain data, we see that there was a net $ 2.4 billion BTC outflow from the exchanges yesterday. This data shows that investors transfer their Bitcoins from exchanges to their wallets to keep them in their hands, rather than sell them, while also telling us that investors expect the price to go higher.

When we technically considered BTC/USDT parity, it tested above its resistance at $ 40,600 on July 28 and rose to $ 41 thousand, but it failed to maintain permanence at these levels. Today, the resistance at $ 40,600 levels breaks upward and if persistence is achieved above these levels, we can expect the price to move towards the band of 43-44 thousand dollars. In case of loss of this support, it may be possible to withdraw the price up to two-week DEMA ($37,760) levels while waiting for Fibonacci to run at $ 39,288, which is equivalent to the 38.20% correction tranche, as the closest level of support for possible withdrawals. Parabolic SAR maintains its signal in the direction of” al " during the Daily period. 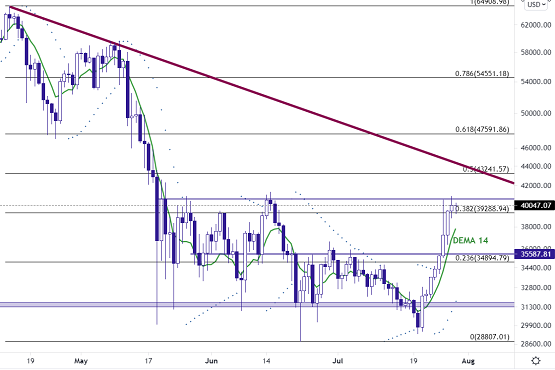 Ethereum, which dominates the horizontal price movement in the morning, is priced at $ 2298. When examining the chain data for Ethereum, a clear increase in the 7-day average of the number of active addresses is observed, while a small increase in the number of new addresses is observed. The pigeon rhetoric from Powell on Feb. For ETH, which has a positive appearance in the basic sense, the appearance is positive.

When we consider ETH / USDT parity technically, the outlook for ETH, which has been continuing its upward momentum with above-average trading volumes for the past 8 days, is positive. During the Daily period, the al signal from the MACD continues on July 22. The next important resistance level for ETH, which consists of a binary dip formation, seems to be the $ 2439.75 level, which is the Fibo’38.20 slice. Although the market-wide rises have continued for the last 2 days, there is a slowdown in price movements. In correction movements, we expect the $ 2140 level, which is equivalent to the 50-day moving average, to work as a support level. 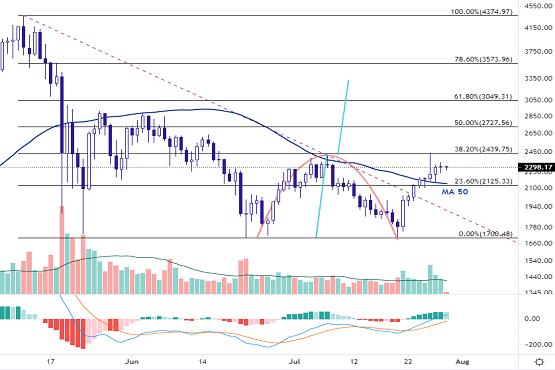 AVAX, which lost about 0.77 percent in early morning trading, is priced at $ 12.24. July 20, Avax, which continues to move prices within the rising channel, has recently decayed its symmetrical triangle formation upward and the breakage is accompanied by horizontal price movement between the middle band and the lower band of the channel. The next target for AVAX, which is about to intersect in the direction of MACD al in a 1-hour period, is $ 12.70, which is the peak level of July 23, and $ 13.50, which is equivalent to the upper band of the channel. 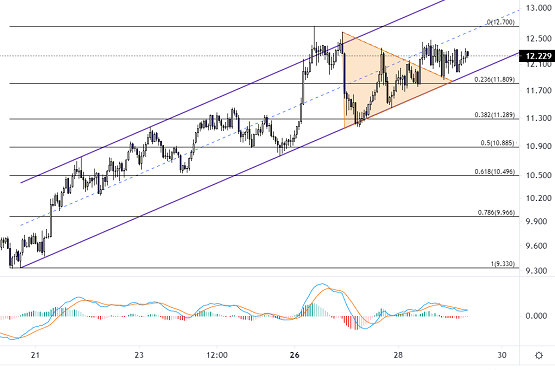 Ripple, which lost 3.5 percent in early morning trading, is priced at $ 0.706. On July 28 (yesterday), Ripple announced that it was opening the first demand-bound demand (ODL) corridor in Japan to take advantage of $ 1.8 billion in trading volume between Japan and the Philippines, with the news, Ripple's side increased in value by up to 15 percent, and Ripple tested Dec $ 0.754. There is no new development on the side of the case for Ripple, who withdrew as of morning.

When we consider XRP / USDT parity technically, the price can be withdrawn to $ 0.677 with the loss of this support, with the nearest support level being $ 0.704. But in possible upward movements, we expect the $ 0.754- $ 0.76 band to work as resistance. If this resistance breaks upward and is maintained for at least a 4-hour period, the price can move to $ 0.80 (Fibo’38.20 correction). The MACD maintains its signal in the direction of” al " in the Daily period as of morning hours. In the short term, buying from support relatives and selling from resistance relatives will be a healthier strategy for XRP.we'll wait for it to work. 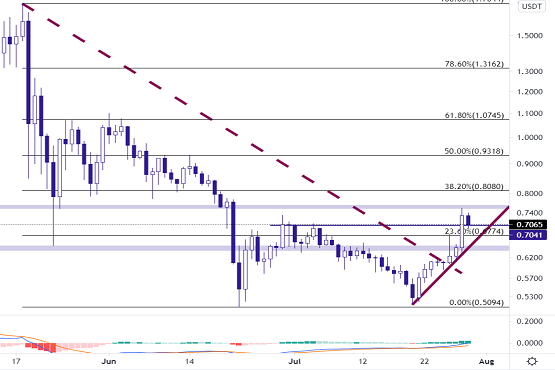 Litecoin, which is horizontal in the morning, is priced at $ 139. When we analyze the chain data for Litecoin, we see a slight increase in the number of new addresses on a daily basis and on a 7-day average. It is only natural that investor interest and confidence in Litecoin remains weaker than the admiral of the market, Bitcoin. In addition, MVRV Z-Score, which indicates a discount in price compared to a fair price when it falls below zero October, continues to point to a discount for Litecoin, still remaining in the zero zone.

When we consider LTC/USDT parity technically, we see that it has been moving above the rising trend in the 4-hour period since July 21. The nearest resistance level is in the $ 141-142 band and we can expect the price to move towards $ 149 if there are closures over this resistance in a 4-hour period and persistence at these levels. On the other hand, we expect the $ 136.95 levels, which coincide with the Fibo correction level of 23.60, to work as the closest support in retreats. If there is a downward break in this support, sales may accelerate towards the $ 129-132 band, as the rising trend will also break. In the short term, buying from support relatives and selling from resistance relatives will be a healthier strategy for Litecoin. 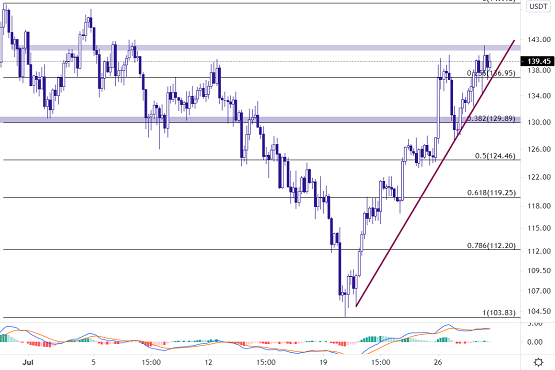 LINK, which lost about 1 percent in early morning trading, is priced at $ 18.90. When we consider LINK/USDT parity technically, we see that it has been priced above the 50-day moving average for the past 3 days. LINK, which reacted yesterday from the region near the August 2020 peak level of $ 20,111, is priced from the region near the level of $ 18.69, which is equivalent to its 50-day moving average. Although the stochastic al signal continues during the Daily period, it has reached the overbought zone. The RSI has been above the 50 level it has not been able to break up for a long time. For Link, Fibo ' is expected to rise to $ 23.60 and also its next target, $ 22.64, unless there is a daily close below the 50-day moving average. 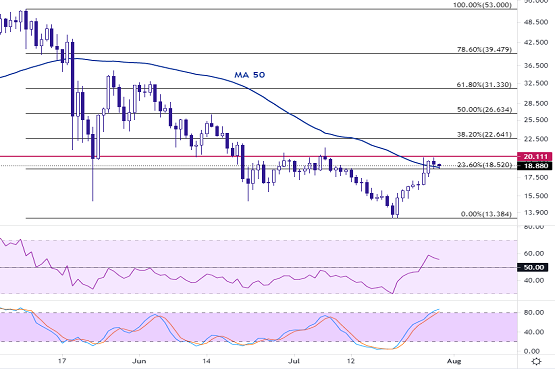 BAT, which gained about 1.75 percent in the morning, is priced at $ 0.5802. July June 18 in BAT, which continues the price movement in the horizontal channel, there is a minor trend formation if you load it as of July 20. When we examined it over a 4-hour period, the stochastic upward intersection gave the al signal. Bat, which is priced above the $ 0.55 level with a 30-day moving average, if the rising minor trend does not break down, the next target can be seen rising to $ 0.64, which coincides with the upper band of the channel. 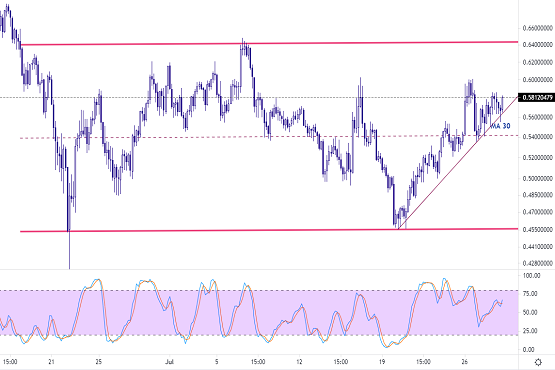