The court has granted Ripple access to the US SEC's documents about whether Ripple's XRP tokens are similar to other cryptocurrencies like Bitcoin and Ether. Ripple will try to prove its justification by comparing XRP with ETH and BTC.

AVAX Announces Its Own Game Platform
AVAX has announced its new game Avaxtars which runs on its own blockchain. The characters in the game are made up of NFTs and users spend AVAX for the characters. At the same time, unique characters are traded with AVAX.

Bitcoin Futures Premiums Rising
While Bitcoin maintained its course in a narrow band between $56,000 and $60,000 last week, investors continued to take high risks. Annualized futures premium rate is between 22% and 25% in derivatives exchanges.

When Bitcoin developers could not decide on Taproot's details, they tossed a coin on the Bitcoin blockchain. As a result of the coin toss, it was decided that the activation timeline of Taproot would be measured by using the median time instead of the block height.

While Bitcoin continues its horizontal course in recent days, many chain data we mentioned yesterday support its rise. Traded with a horizontal change at $58,000 this morning, BTC was rather slow compared to other altcoins. The amount of BTC, which is discounted respectively by 15 and 10 points on ETH and LTC bases, continues to support the increase. On the other hand, BTC continues to increase in liquid wallet accounts (1 BTC and lower balances).

Technically speaking, the BTC/USD parity remains flat between $57,100 and $59,100 zone which corresponds to Fibo'61.8 and ‘78.6 slices. Holding onto the Bollinger mid-band on the diary and the lower band for the 4-hour period, BTC made the $57,000 level a solid support. In the new record attempt of BTC, which continues to move within the uptrend channel, we continue our expectation of 66,000 movements towards the channel mid-band yesterday. 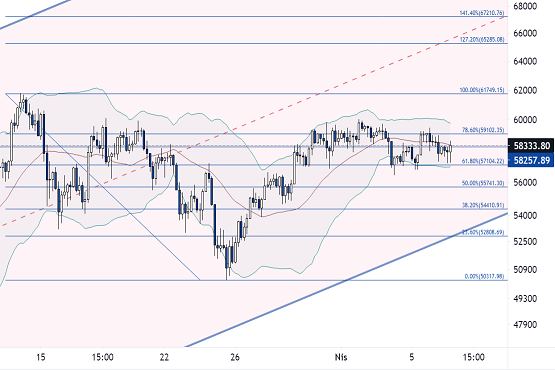 After Ethereum tested the $2,100 levels, it has closed the discount due to miner protests that it has been experiencing for a while. On Ethereum, the Berlin hardfork will come into play next week, and another step will be taken in the 2.0 transition phase. Ethereum soared with its dominance of 12.5% ​​and the premiums it received, as well as the altcoin season effect. However, with its performance in the short term, profit realization is observed. When we consider the ETH/USD parity technically, the unstable trends and doji candles forming in the $2,140 zone confirm the upward pause, while the MACD and momentum point to a negative divergence. Therefore, it can be expected to make the expected correction and then continue where it left off. It supports the levels of $2,060-2,040 and $2000, respectively, based on the Fibo levels. 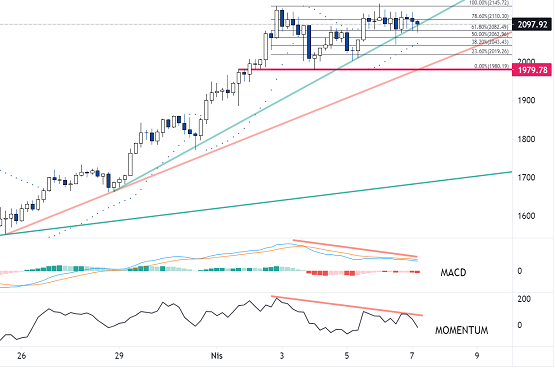 AVAX is located in the $31.00 zone with a 2% retracement this morning. Avaxtars, which was promoted by AVAX founders the previous day, attracted the attention of users. The game draws attention with its characters that have been converted into NFT and the users can make their payment with AVAX. Thus, it makes its investors happy to see that AVAX is also in the gaming industry.

If the AVAX/USD parity is technically analyzed, the parity is located near the $30.80 intermediate support. Although it is in the uptrend channel, in general, it needs to get rid of the downtrend in order to accelerate the upward trend. In the short term, there will be the resistance at $32.40 in the Fibo'38.20 slice, followed by the resistances to be followed in the upward direction of $35.00, the mid-channel band. The outlook is positive. 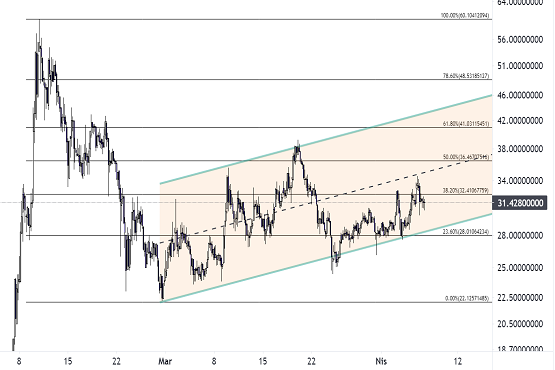 Ripple made a successful defense in the teleconference held on April 6 in line with the expectations and made positive developments in the cryptocurrency community. Ripple had previously asked the SEC to report the main reasons for ETH and BTC not being securities, but this request was denied by the SEC. At the hearing held the previous day, the judge decided to have the Ripple request documented by the SEC, taking a parallel step with XRP's defense. Ripple's lawyers, on the other hand, highlighted the late moves by the SEC, asking why XRP did not threaten to become securities in the 8-year period. After these decisions, XRP rose by 7% within 1 hour, and its trade volume reached $28 billion, almost capturing the transaction volume of ETH.

The XRP/USD parity retreated 5.6% this morning, and is in the $1.03 price zone. In the technical view, a new flag target has been formed with the upward break of $0.92, followed by Ripple's flag target of $1.25, which is up 20%. A course above the $0.97 resistance would allow the parity to gain momentum in the buyers direction, with the $0.97 response level becoming support for retreats. The continuation of the $1.16 uptrend with the Fibo'61.80 slice will serve as the first compelling resistance for the parity. Oscillators seem far from resistance but unstable in the 4-hour period. There may be some consolidation for XRP. 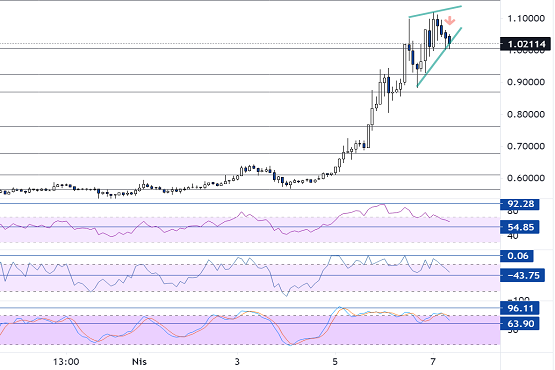 Litecoin is pricing in the $233 zone this morning with a 1.5% retracement on a daily basis. It stands out with 19% return in its weekly performances. LTC, which has been idling for a while due to its high volume, thus stands out again with new investor entries and decreasing volume in stock markets.

When the LTC/USD parity is technically analyzed, the reaction from the $200 zone for the parity on the uptrend pushed the parity to $224 resistance. With the breaking of $224, the buying appetite increased and the flag formation reached the target of $245 in Litecoin. There may be support response zones of $232 and $226 in pullbacks. The outlook is positive in the short term, but the parity may want to consolidate somewhat after rapid increases. We maintain our $380 expectation in the medium to long term. 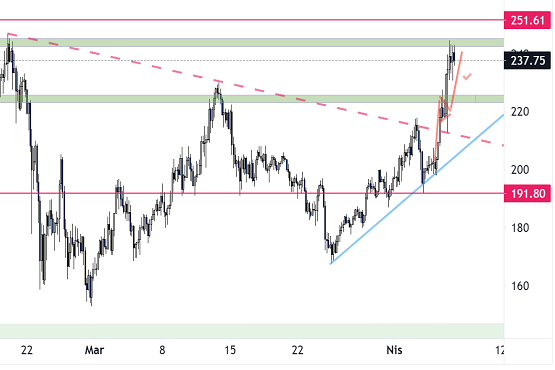 We do not neglect to share in our analysis that corporate buyers are increasingly active in LINK with the increase in demand for Chainlink's oracle technology and smart contracts created in the blockchain. Grayscale's addition of five cryptocurrencies, one of which was LINK, was read quite positively for Chainlink in the past days. In current developments, the news that Chainlink was added to the Digital Large Cup Fund by Grayscale enabled LINK to achieve a successful rise. In the next period, LINK, which will take place in the fund instead of XRP, can expand the range of corporate buyers and whale accounts. The increase in active and new addresses continues. In addition to the increase in the amount of transfer, the amount of LINK in the exchanges is decreasing.

Technically speaking, the LINK/USD parity is at $34.00 with a daily retracement of 2%. For the parity holding the $33.80 support, oscillators are also approaching the support zones on the 4-hour chart. For this reason, $33.80 and $33.70 supports will be followed as reaction zones for pullbacks. The triangle formation formed has confirmed with the closings above the $29.00 level. The formation target appears as $60 in the medium-long term. The course is positive in the upward direction. 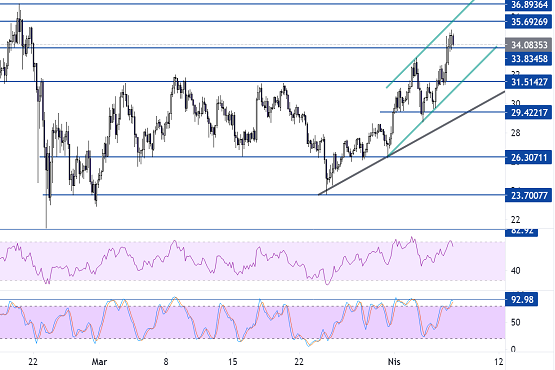 Basic Attention Token is retracing 1.5% this morning, in the $1.30 zone. The parity has gained 18% in the 24-hour period. The reaction on the $1.18 support also broke the upper band of the channel, leading it to test $1.38. But the channel failed to show close on the upper band and then made some corrective action. The outlook is positive in the rising channel. There will be support zones at $1.29 for the short term and $1.25, which is the mid-channel. As the parity is at the upper band of the rising channel, it strengthens its course with buyers. For this reason, we will continue to read the trend positively as long as candle closes are not made below $1.25. 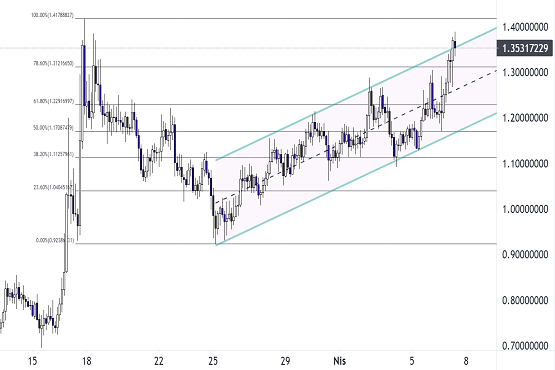