Blockchain payment firm Ripple made its first investment in the MoneyGram remittance giant in 2019. However, Ripple has announced that it will sell one-third of its shares in MoneyGram. Ripple purchased its shares at $ 4.10, and MoneyGram's shares rose more than 260 percent this year, closing Wednesday at $ 7.42. This means Ripple has made a significant profit from its investment. It is a completely logical financial decision and in no way a reflection of the current state of our partnership, the Ripple spokesperson said.

Facebook's Coin Libra Will Be Released In The Near Future
After more than a year of scrutiny from global financial regulators, Libra will be launched in the form of a US dollar-backed digital currency, the Financial Times reported on November 27. The exact launch date expected in January is still unknown, although approval is pending for Libra Association to operate as a payment service by the Swiss Financial Market Supervisory Authority FINMA. This news may reflect positively on cryptocurrencies in digital currency transit.

Ukraine Will Explain Blockchain To Its Citizens With Tv Programs
The Ukrainian government announced a new development in a strategic move to raise awareness about blockchain and digital assets across the country. According to the statements made, it was reported that the Ministry of Digital Transformation will launch a new TV program that will educate citizens across the country about the potentials and benefits of adopting digital assets and blockchain technology.

Bitcoin Mining Equipment Stock Exhausted
The increase in bitcoin prices has revived interest in mining. As a result, a record was broken in mining equipment sales. The queue for bulk pre-orders for the most powerful devices from major manufacturers extends to May 2021.

Bitcoin is trading with an increase of 2% this morning, again surpassing $ 18,000 on the last trading day of November. Futures also started with an upward gap and buyer demand. Glassnode CTO Shultze-Kraft announced that in a record amount, more than 800,000 addresses currently hold at least 1 BTC. The number of wallets with less than 1 BTC in their wallet is only 5% of the Bitcoin market value. There is some decline in the risk appetite in global markets. The news about vaccine development studies has reduced the risk of appetite somewhat. Considering that the gold-Bitcoin correlation is negative, it seems that BTC will not be able to benefit this time if there is a new safe harbor demand. Therefore, it is useful to follow the market sensitivity and developments closely. On the other hand, there is a decrease in money entries to stablecoins. Money inflows are in direct proportion to Bitcoin. Bitcoin is not a safe signal for the decrease in money entries above $ 18,000.

When we consider BTC / USD technically; When we consider the correction levels since the last drop; The $ 18,650-18,765 zone coincides with the resistance range and the 78.6% retracement rate. This region will be followed as daily resistance. Since momentum and MACD indicators do not indicate a strong appetite, it may be helpful to stay away from resistance zones or near them. In retracements in BTC where the uptrend continues, the $ 18,200 level coincides with the Fibo'61.8 zone. 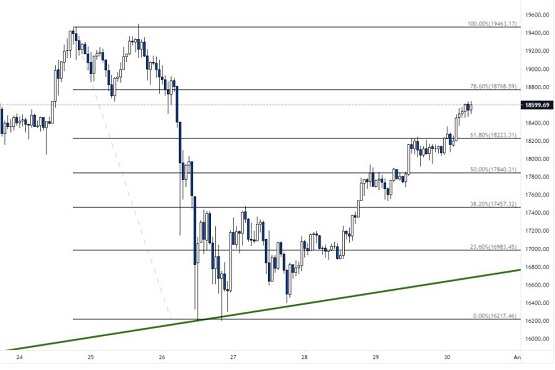 Ethereum dropped from the $ 620 level behind the Coinbase news last week to $ 480, causing panic. In our previous video, we stated that coins with projects such as Ethereum should not be panic and recovery may occur. Expect news of the Ethereum 2.0 update hours before December 1st. Ethereums, which were issued for 1-2 years except for the amount staked for the update, reached the highest level in 10 months, the amount transferred to passive storage for long-term storage in cold wallets. He shared that according to Glassnode data, there is an increase in the number of wallets with more than 10,000 Ethereum. According to shared data, the number of these wallets reached the highest value in the last 3 months, setting a new record. There are 1062 wallets in total.

When we take ETH / USD technically, last week's bearish is back from the middle band of the bullish channel. While the $ 585 level is at the top of the current channel, the appetite for buying continues in trading. In addition, the $ 610-622 range resistance zone, however, when we examine it on the weekly chart, there is no history of significant resistance to the $ 700 levels if $ 620 breaks. The outlook continues in a positive direction. 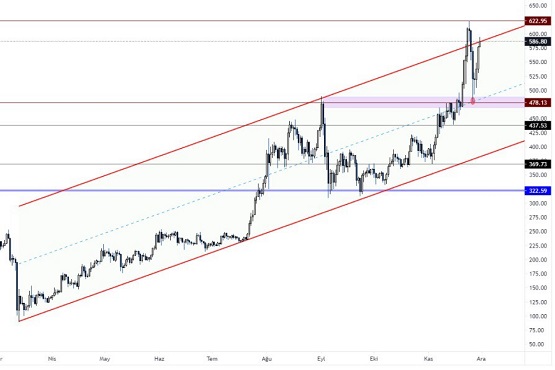 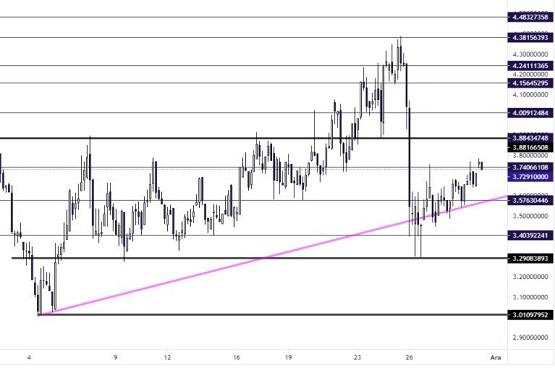 Ripple Analysis - Ripple is trading near $ 0.63, up 3% on the first day of the new week. Their weekly activity also increased by 35%. XRP has soared by total market cap to become the third largest cryptocurrency ahead of Tether. Ripple, which spent almost a year trading under $ 0.30, has increased in value by up to twice this year. According to Google data worldwide XRP need at this time and Turkey it was able to boost its popularity in private.

XRP / USD broke the key resistance level of $ 0.5950 over the weekend and rose as high as $ 0.6520. XRP is traded at $ 0.6300, creating a trading band between $ 0.5910 and $ 0.6490. The hourly period TOBO outlook on Friday increased the buying appetite, rising to $ 0.6520. Good follow-up of the support resistances in volatility can shorten the distance that can be done in a long time on the basis of the process. We can say that the volatility is high in XRP / USD, where profit sales are seen after the news-based selling pressure. 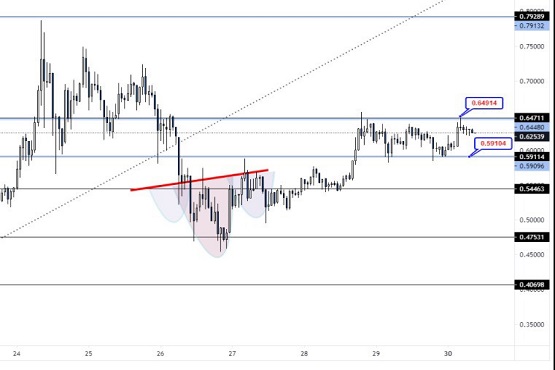 Litecoin Analysis- While Litecoin rose to $ 81 last weekend, it is trading near $ 79, with around 7% change this morning. According to Glassnode data; The lowest level of the last three months was observed in the amount of investors holding Litecoin (HODL) in their long-term wallets. Profit sales were seen with the sudden pullbacks in the market. According to Chainalysis data, the amount of Litecoin transferred between wallets and exchanges has made the largest withdrawal in the last 3 months. In addition, the amount of Litecoin held in wallets in exchanges reached the highest level in the last year.

LTC / USD declined from $ 90.0 to $ 64.00 as a result of days of strong selling pressure. The reaction that came with the suppression of sales pressure and news impact was followed by increases up to $ 81.00 in LTC / USD. As a result of the price fluctuations that have continued since March, a double bottom has been observed and the target is exceeding the level of 105 $. A possible correction could offer the investor an opportunity to recapture the rally and open the way for prices. In addition, the slopes of the upward trends in LTC also steeped, and the strong resistance point from the beginning of the year accelerated its move to the $ 85 level. The outlook is in the direction of an uptrend. 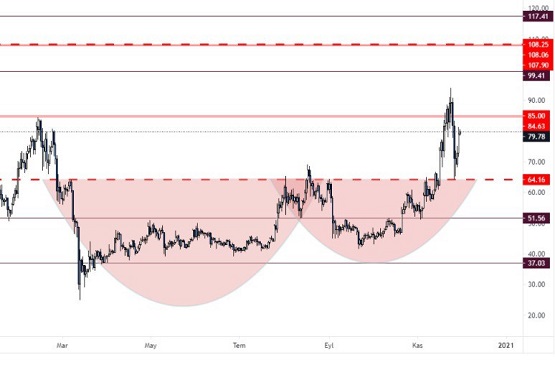 LINK Analysis - LINK is trading near $ 14, up 5% this morning based on yesterday's trading. According to Glassnode data; LINK active wallets experienced a 40% retreat compared to the two-day averages. Up to 60% withdrawal was observed in the number of LINK transferred to inter-wallet exchanges. Cryptocurrencies, which experienced sharp withdrawals after the rises of the past week, also decreased in the active transactions of investors. Nevertheless, we continue to keep an eye on the short and long term in terms of the project and follow the withdrawals from the support levels in terms of their reactions.

LINK / USD continues its movements in the upper band of the bullish channel that has been continuing since 23 September. While the upper band of the channel extends to the levels of $ 15.00, it has also created a minor uptrend in recent days, indicating a recovery in momentum. Our minor trend is also in the range of $ 12.10-14.20. Therefore, the outlook is bullish. In order for the purchases to accelerate further and increase the slope of the trend, the strong support from November 18 should be traded above the upper band of the channel $ 15.00. As 14,80 and 15,40 are intermediate resistances, breaks may further mobilize the buy positions. 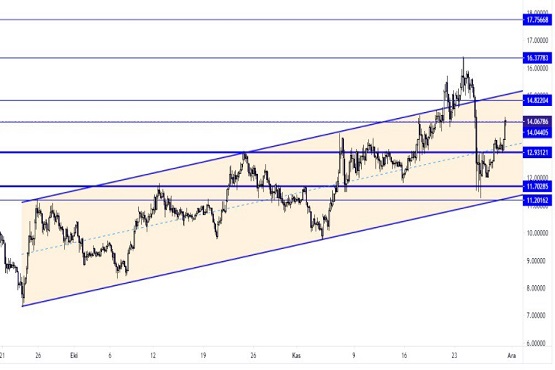 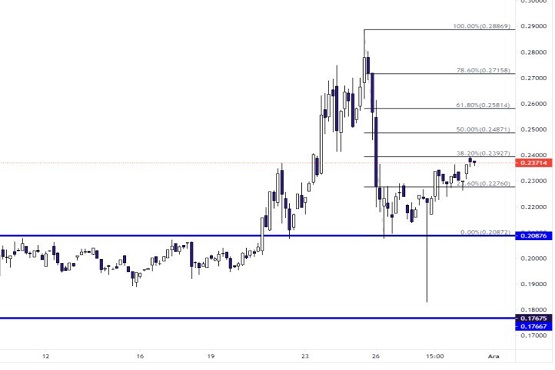