Ripple Sends a Letter to the Court

Ripple (XRP) CEO Brad Garlinghouse announced on Twitter that he has requested the dismissal of the case against the SEC's amended complaints. In a 5-page denial petition, it was argued that SEC claims are invalid.

Following the sharing of the Ministry of Treasury and Finance recently, T.C. The Presidential Digital Transformation Office made an informative post about Bitcoin and its technology on its official Twitter account and announced that it will create a blockchain glossary.

Brave browser, which has Basic Attention Token integrated, announced the acquisition of the open search engine Tailcat. The Brave browser, currently based on external search engines, offers users the opportunity to choose between privacy-oriented search engines. Tailcat, on the other hand, is built on a completely independent index and does not collect IP addresses or personal data to improve search results.

Banco de Bogotá, one of Colombia's largest banks, will pilot crypto services as part of a regulatory sandbox project.

North America's first approved BTC investment fund (ETF) holds more than 11,000 Bitcoins as of March 3. Operating in Canada, ETF saw a trading volume of more than $ 165 million on the first day. The ETF, which opened on February 19, increased by 88%.

While the aid package is expected to pass from the Senate, on the other hand, the Bitcoin and S&P 500 correlation has risen to a five-month high. The effect of this sentence on cryptocurrencies is quite intense. Rising interest rates in the USA, rhetoric that the corporate tax will be increased and the increase in the UK put pressure on major indices and even altcoins are affected by Bitcoin dominance. BTC, trading at the $ 47,000 level this morning, seems to be with 2.5% sellers. Although it is not a problem with cryptocurrencies, this situation, which is suppressed by the global risk appetite, increases the uncertainty. Speaking yesterday evening, Fed Chairman Powell said that the calmness will be maintained for now for rising interest rates, that the Fed is far from its targets and will use all the tools at its disposal if necessary; The upward pressure in interest rates continued and caused the currencies to be negatively affected.

When we consider BTC / USD technically, the declining trend that occurred in the daily period, the bullish channel that was disrupted in the four-hour period and the TOBO that did not form, rejected the rise. For this reason, there is a technical weakness. Although incoming metric data says that big sellers are stopping, the volumes show us that new buyers are not entering. The double top outlook in the daily period is also preparing downside if the $ 44,000 level is broken. For this reason, it can be considered to put stop loss behind the 44 thousand zone. Currently, there is a response run at $ 46,500, which corresponds to the Fibo'23.6 slice. 48.800 is the resistance zone that corresponds to the Fibo'38.2 slice. 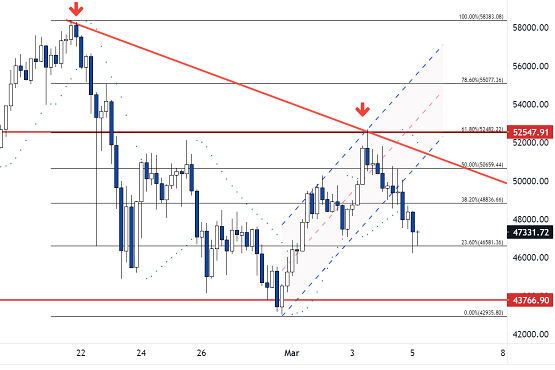 Ethereum is trading sideways and weak at $ 1470 this morning, keeping up with the weak movements of the general market direction. While the ETH-BTC splitter offers a more positive outlook for Ethereum, there is a general decline due to pressure from the stock and interest market. Goldman Sachs is also entering into cryptocurrency transactions, and 60% of its participants in the survey they have answered that they will increase their crypto assets in the coming period. Ethereum can also get a considerable share of this pie once it enters CME. On the other hand, ERC-20 network charges remain high, even though network charges are falling or not at the height to threaten the price of ETH at the moment.

When we consider the ETH / USD pair technically, the previous $ 1416 peak in the weekly period is currently our major support. Because if it goes under this region, it may turn into "dark cloud cover", which is a declining candle formation in the weekly period. In the four-hour period, TOBO did not occur and refused to cross the neckline, with no approval. The MACD is still on sale. The $ 1470 level is our Fibo'23.6 support, while $ 1416 is our major zone. It is useful to go with a prudent strategy. The outlook is weak and supportive. 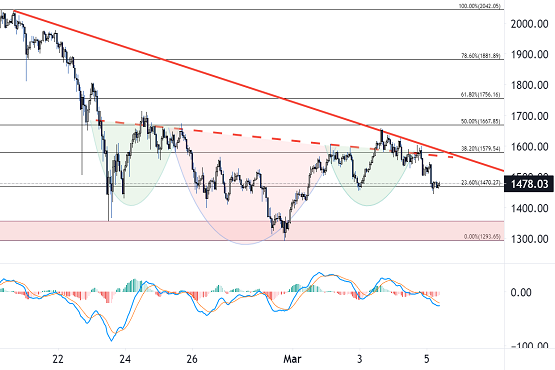 The AVAX / USD pair is retracing 3.5% this morning and its current course is around $ 24.80. AVAX has been integrated into a new trading platform today, along with BTC and USD pairs. This development was welcomed positively for AVAX, whose partnerships gradually increased on the DeFi side. The platform allows AVAX to be staked and AVAX investors to profit from it.

The AVAX / USD pair remains horizontal between $ 22.00, the starting point of Fibonacci, and $ 31.00, which coincides with the Fibo' $ 23.60 level. The $ 31.00 level working as resistance pushed the pair to the current level of $ 24.80 as the hourly price candles gradually weakened in the last 3-day period. Initial support is at $ 22.00. Oscillators have begun to leave the negative zone. Stochastik,% R and RSI with the ends pointing up are thus giving a positive signal in the 4-hour period. For this reason, an upward reaction can be watched in the short term before reaching the support level. However, the view is quite horizontal. 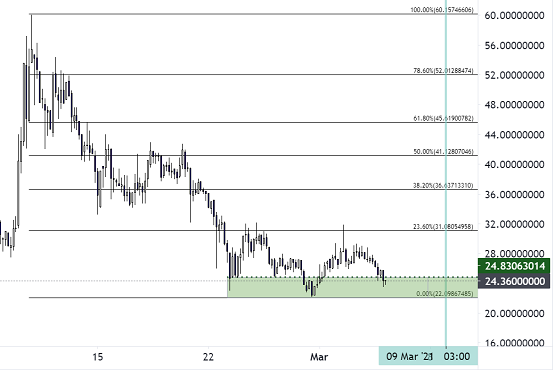 The previous day, Ripple co-founder Brad Garlinghouse announced on Twitter that he had written a five-page denial of action to the SEC. Today, the lawyers of Chris Larsen, board member and co-founder, sent a letter to the New York court. In the letter, it was emphasized that the SEC's allegations were unfounded and could not prove their accusations. XRP saw a 6% price increase after the letter details were released. On the other hand, Ripple, which has recently announced its work on central banks, is trying to eliminate the negative impact of the litigation process by making strong breakthroughs. It is seen that XRP, which was not listed in many exchanges after the lawsuit, also increased its transfer volumes. Before moving on to the technical part, we should state that XRP has not technically reflected this, as well as the macro indicators gaining strength. However, we can say that the postponed valuations can spread to a more accelerated process. Still, it remains a key point for the potentially strong XRP project.

When the XRP / USD pair is technically analyzed, it is seen that the reaction from the $ 0.46 zone led the pair up by 6%, and then returned to the overall $ 0.46 old support zone. When the support zone specified during the day is followed, but when the chart is analyzed hourly, it is observed that the price movements here are unstable. On the other hand, as volume pulls itself down, momentum also peaks in CCI. For possible pullbacks, the $ 0.41 zone becomes the main support and reaction level. 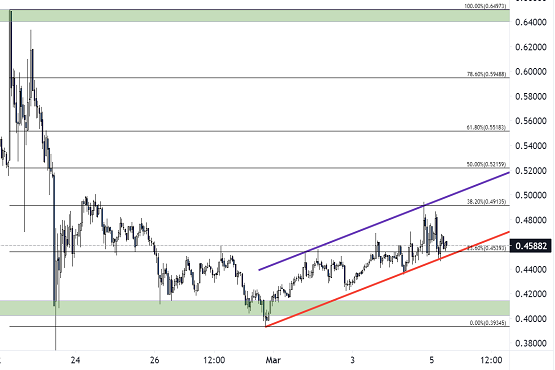 LTC / USD parity appears on the last day of the week with prices in the region of $ 172. Litecoin has lost 5% on a daily basis, but Grayscale's purchase of Litecoin for the last month means demanding most of the Litecoin supply produced, and at the 24-hour exchange, 2500 LTC contracts were bought by Grayscale. However, it is inevitable that the negative developments on the Bitcoin side will also affect LTC prices, because Litecoin is one of the market leaders with the highest correlation with BTC. In the upcoming period, we can expect the intense interest on the Litecoin side to reflect positively on their valuations against the dollar.

When the LTC / USD parity is analyzed technically, it is seen that the pricing is above the $ 171 level in the Fibo'23.60 tranche. We can say that 23.60% of the Fibonacci retracement could work as strong support for LTC from where we can see upward reactions. On the other hand, when the Stochastik,% R and RSI indicators are analyzed, we can say that they are very close to the oversold zones and the reactions from here tend to be positive. 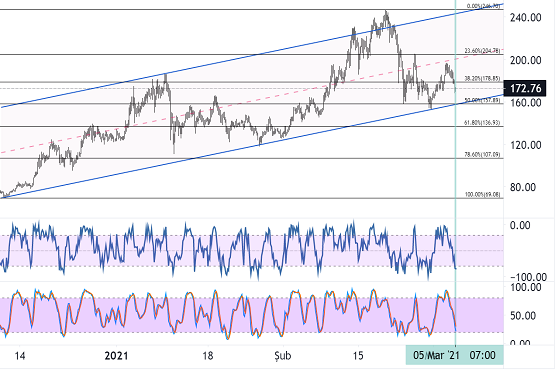 Although LINK is experiencing a 4% retracement this morning, it has lost 10% in the 24-hour period, but remains in the 7% plus zone for weekly returns. On the other hand, with the increasing popularity and widespread use of cryptocurrencies and payment procedures, we see that LINK has also been integrated into many platforms. The previous day, a booking company that appeals to thousands of users and a platform that provides staking and interest income on cryptocurrencies, they started to support LINK as a payment and staking tool.

The LINK / USD pair broke down the $ 28.90 level, which is the main support zone, and accelerated the loss of the price here, by succumbing to the sell-off course. The correction experienced ended with the testing of $ 25.60, the middle band of the channel formed in the sagging regions, and a 5% response was recorded from here. Price candles above the $ 27.30 channel upper band may create a calm but positive course with the pair holding onto the bullish channel. 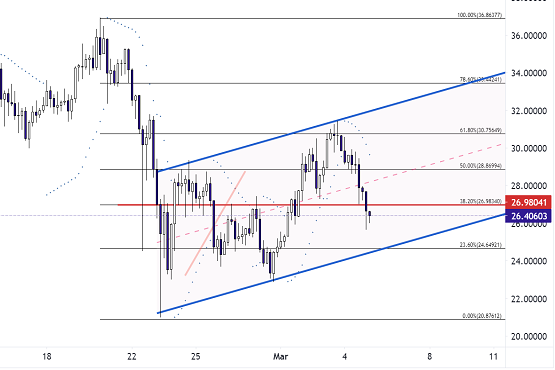 Brave platform, which enables Basic Attention Token to be integrated and accumulated as it is used, announced a new partnership. The company stated that it will make improvements through another browser that it has purchased, and that it aims to offer a new browser that works at Google standards and is also privacy-focused. Although detailed information about the process is not yet available, upgrades on Brave will continue to be positive for BAT. It would not be wrong to say that Brave's increasing potential day by day also positively affects the general course on BAT.

When the BAT / USD parity is analyzed technically, it is seen that Basic Attention Token, which has retreated by 4% on a daily basis, is priced in the $ 0.66 region. The uptrend that started as of February 23 is preserved, even the reactions are in the direction of the trend and more accelerated for the last few days. The chart retraces a little after the strong rise that it previously gave its signals and is holding on to the Fibo'78.60 retracement zone. The current correction zone in the $ 0.66 zone could be the support zone for the chart. We can say that the flag is still continuing, although the $ 0.56 level, where the flag formation started, is the point where the minor uptrend has passed. 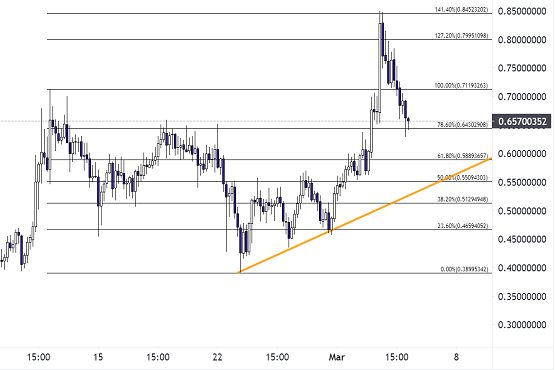