The CEO of Guggenheim Partners, one of the world's largest wealth funds with more than $ 310 billion in capital under his management, stated that they have been following Bitcoin as a company for 10 years and after their fundamental analysis, they think that Bitcoin can go up to $ 600,000.

Searches for "buy crypto" on Google broke a record, reaching an all-time high in January, according to data from analytics company The Tie. On the other hand, searches for "best cryptocurrency app" and "best crypto exchange" also reached record levels. These increases in search trends show that the interest in the cryptocurrency industry has increased.

It turned out that America's largest public pension fund CalPERS increased the number of shares in the Bitcoin mining company Riot Blockchain 7 times in the last quarter of 2020. The fund has approximately $ 441 billion in assets, and with the increase in BTC prices, the value of the shares held by CalPERS approached $ 2 million.

Bitcoin rose to the $ 38,000 level again a week later. The rise in BTC, which is traded with a 1% increase this morning, is experienced with the general market this time. The last $ 42,000 trial was not supported by stablecoin entries on exchanges in on-chain data, and we thought it was due to FOMO (fear of staying out / missing an upward opportunity) and there could not be a continuous uptrend. Currently, the previous week's stablecoin cumulative amount broke a record in the stock markets and the stablecoin supply ratio, which is a special ratio, gradually decreased, indicating that the appetite to buy cryptocurrencies increased and the desire to turn into cryptocurrencies made up of Bitcoin and other altcoins. Basic and quantitative data support the course in Bitcoin.

When we consider BTC / USD technically, the secondary declining trend that started at $ 42,000 was broken and a minor uptrend started at $ 29,150. Momentum and MACD accompany this direction. The $ 37,300 level is our daily support while the $ 36,887 level, which corresponds to the Fibo'61.80 retracement level, is our major support. Even though the $ 39,100 level creates a resistance zone on the rises, we are getting technical approval to support the record moves in the daily period. 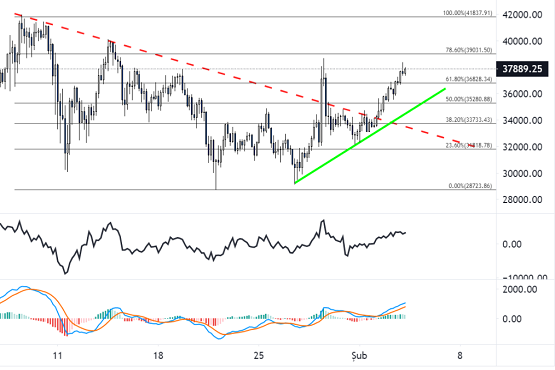 Ethereum has been breaking records for the past two days. Finally, ETH, which broke the record yesterday evening by testing the $ 1699 level, is trading with a gain close to 1% at $ 1675 this morning. The technical movements seen in the ETH-BTC clipper show that it has 35% more potential than the current price. Accordingly, if BTC is $ 40,000 in the calculation, $ 2330 levels are calculated for ETH. On the other hand, as ETH breaks records, network density and associated miner fees increase. The extraordinary increase in these fees, called gas fees, recently dropped ETH to $ 900 levels. For this reason, it is useful to keep an eye on the network charges on where to buy it.

Considering the ETH / USD pair, the last retracement levels are at the $ 1688 resistance level, while the $ 1616 level is at the support, according to the Fibo retracement levels we pulled between $ 1270 and $ 1440. In addition, as can be seen in the graph, the rising triangle formation at the end of the long-term rising trend of ETH is a continuation and its target is $ 2060, the length of the vertical side of the triangle. Therefore, the only scenario that could hinder technical support on the $ 2000 journey is the gas feedir, which may increase excessively. 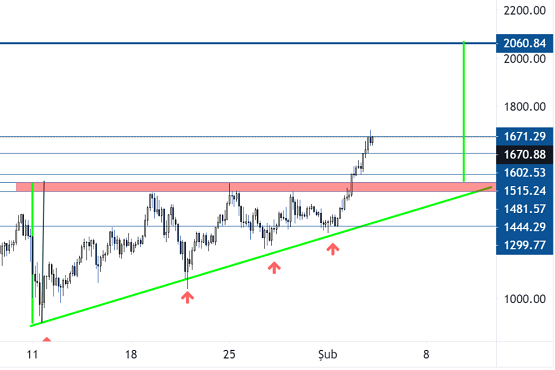 The AVAX / USD pair is listed at around $ 15.30 this morning, gaining 3% in value. PoS coins with Ethereum 2.0 technology; AVAX and Algorand have been among the most striking cryptocurrencies recently. On the other hand, the records seen in Ethereum for the past two days point to an increase in network density. The increase in network density also increases network charges in parallel. When these fees increase, AVAX and ALGO stand out as substitutes this time.

In the technical view of AVAX / USD, we stated that the price has an accelerated upward potential after $ 13.50. The channel broke on the upside and quickly surpassed the upper band of the channel at $ 14.50, setting a new record at $ 15.40. At the same time, the prices rising above the rising channel indicate that the rise is increasing with a cumulative acceleration. The bullish potential is maintained and the $ 14.50 channel upper band and support level for AVAX with no significant resistance ahead. Two flag formations on the daily chart of AVAX; The short one points to the $ 19.00 level and the larger one to the $ 23.00 level. 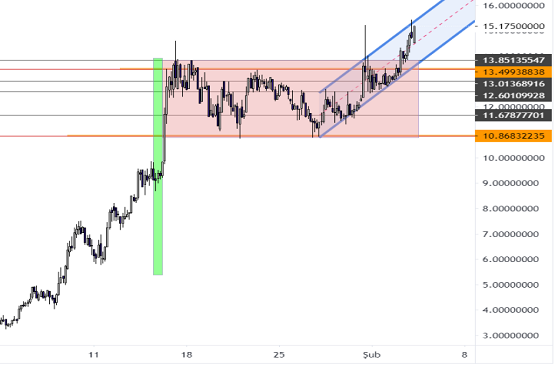 The XRP / USD pair is pricing around $ 0.3900 this morning with a loss close to 2%. Although the market movement of the previous day was very positive, we have not seen this reflection in XRP for now. Nevertheless, RippleNet continues to collaborate successfully, and the previous day it was announced that the Ripple network will be used for a joint project of MicroStrategy and Visa. Although Ripple is doing well as a company, its contribution to XRP will only be when the case with the SEC begins to clear and investor uncertainty disappears. Still, positive developments on the Ripple side could be positive for XRP in the medium to long term. Considering the actions of the previous day and before the trial process, a cautious approach should still be taken. 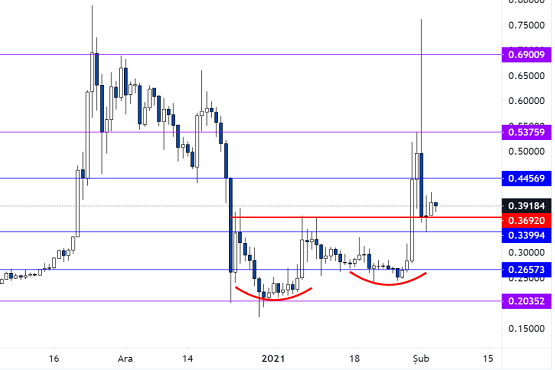 Litecoin is trading at $ 152, down 2% this morning. We can say from both scissors and chain data that the potential of LTC, which has increased by 32% for the last three days, still continues. Even the LTC, which is still 4% negative in the monthly period, and the BTC clipper, which is 12% plus, have the potential for about 15% LTC. The number of transactions in LTC reached the highest level in 1 month, the number of new LTC addresses the highest in two years, and the number of active addresses reached the highest level in 3 years. For this reason, chain data supporting the upward trend constitute the basic story.

The gains in LTC / USD began to concentrate around the OBO and pull-back view. The $ 157 level is the neckline of OBO and the point we marked with a circle on the price, as can be seen from the chart. If this zone fails to break upward as soon as possible, we can see a profit realization of 32% of the last three days in pullbacks up to $ 140 levels. Therefore, it may be more correct to wait for the upward breakout of the $ 157 level. In the MACD, he crossed the buying zone and enabled the intersection. To avoid the MACD trap, the $ 157 level should be broken and then bullish expectations should be started. 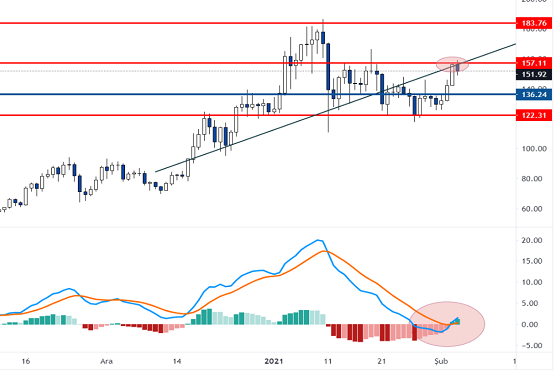 We've been waiting for a record with Ethereum for the past two days at Chainlink, which this morning LINK refreshed the record by reaching $ 26.20 in the Asian session. The amount of cryptocurrencies locked in the DeFi sector reached an all-time high, reaching $ 32.5 billion with the gain in value in ETH. Increasing interest in the DeFi sector for LINK, which is the largest DeFi token in terms of market value, has a positive effect on prices. It is not just a demand from DeFi, while companies use blockchain through smart contracts, the LINK platform acts as a bridge, enabling companies to connect with the digital world. The efficient operation of cryptocurrencies and especially the use of blockchain, from maintaining vaccines to the financial affairs of companies, increases the corporate and individual demand for LINK. In on chain data, the number of smart contracts on LINK and the number of addresses holding more than 1% of the LINK supply saw highs in the past two and three years.

LINK / USD parity continues to be in the middle - lower zone of the bullish channel. Channel levels serve as efficient support and resistance, and record steps are taken within channel boundaries. The $ 26.60 support zone above the Fibo'78.60 correction was the area where prices moved up. Initial support in possible fixes is at $ 24.00, which is also channel sub-support. The price, which was at the upper level of the Bollinger band, created sags on the band with the record. Although demand and acceleration are so harsh that corrections are understandable, the positive trend for LINK is maintained and $ 25.80 then $ 27.00 may be our new resistance. 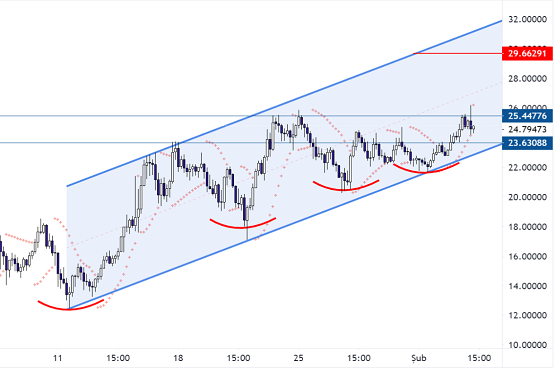 Basic Attention Token is priced around $ 0.3170 this morning, up 1.7% against the dollar. There have been low volatility and sideways movement for BAT for the past week as well as sharp moves in the market. However, technical analysis is showing signs of rapid bullishness after this consolidation period. After the double bottom formation, the flag formation also points to price increases of 20% and above for BAT. Reactions on the $ 0.3100 Fibo'50 retracement are significant because the most critical level of the Fibonacci retracement is the 50% slice. In price movements above this zone, the initial resistance zone will be $ 0.34, and then the double bottom formation target can be tested with $ 0.38. 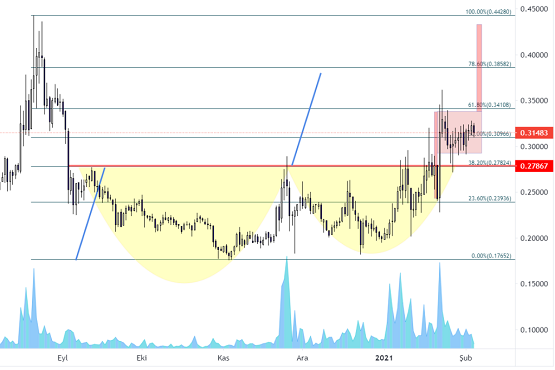