Russia to Recognize Bitcoin as a Form of Currency

The debate over the status of the cryptocurrency in Russia is about to end, according to a local report. Russian newspaper Kommersant reported that the Central Bank of Russia and the government have reached an agreement on cryptocurrency regulations.

While Bitcoin investors often promote the cryptocurrency as an anti-inflationary "digital gold", Bank of America says this is by no means true. A recent company report shows that the crypto asset is moving much more similarly to risky assets like stocks, reaching all-time high correlations with the S&P 500 by the end of January.

Luxury fashion brand Gucci has bought itself some land on The Sandbox platform. This action will allow the fashion brand to create virtual fashion experiences for consumers, but details on what that experience will lead to are not yet public and it is unknown how much the fashion brand has invested in acquiring digital land rights.

In a recent investor note, the bank's analysts estimate that Bitcoin's "fair value" is currently $38,000, which is almost 12% lower than the current market price of around $44,000. While current market conditions have led JP Morgan to set a lower "fair value" for Bitcoin, analysts have actually raised their long-term price forecasts for the flagship crypto. In the research note, they updated their previously set $146,000 target for BTC to $150,000.

Microsoft Corp. Is Looking For A Crypto Business Director To Build Its Web 3.0

The world's tech giant Microsoft Corp., which is tracking crypto adoption globally, is now looking to hire a Blockchain Business Development Director to lay the foundation for future Web 3.0. The job role with the company's Artificial Intelligence and Emerging Technologies team will lay the foundation to support and inform Microsoft's Web 3.0 strategy, according to a job posting on Microsoft's official website on Monday, February 7th.

The world's largest asset manager, BlackRock, wants to allow its clients to trade cryptocurrencies. The mega-asset manager wants to start his offering with trading customer support before continuing to offer his own credit facility for crypto trading. This means BlackRock has previously shown a positive trend towards cryptocurrencies, and Bitcoin in particular, according to sources familiar with the plans.

Decentralized finance lending platform Aave (AAVE) has launched the Lens Protocol ecosystem on the Polygon (MATIC) blockchain to challenge centralized social media platforms like Twitter or Facebook. Beginning with an open letter to rally support around the idea that content creators should own and control their digital identities, the project led to the development of a Web 3 local social network powered by NFTs.

Bitcoin lost a 1,70% value during morning hours and is priced around $43.756. In a recent investor note, the bank's analysts estimate that Bitcoin's "fair value" is currently $38,000, which is almost 12% lower than the current market price of around $44,000. While current market conditions have led JP Morgan to set a lower "fair value" for Bitcoin, analysts have actually raised their long-term price forecasts for the flagship crypto. In the research note, they updated their previously set $146,000 target for BTC to $150,000.

When we consider the BTC/USDT pair technically, BTC broke the downtrend as of November 10, on Friday along with sharp sales and continues its upward movement. Along with the momentum, BTC broke the $42,669 level (50-day moving average, and could hold above these levels in the daily chart. Although the sideways price movement has been dominant for a few days, as long as the persistence above the 50MA level is maintained, the $49200 level (200MA) can be another target. 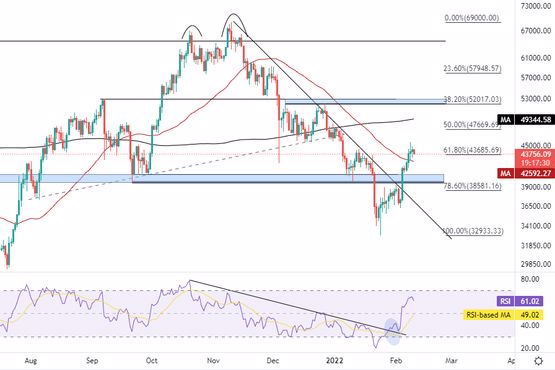 Ethereum lost a 2,36% value during morning hours and is priced around $3174. When we consider the ETH/USDT pair technically, ETH broke the short-term minor trend upwards and continued its rising towards the major downtrend. In ETH, which started the new week positively, the resistance level, which coincided with the major descending trend yesterday, was broken upwards and a daily close was made above it. If persistence is provided above the $3200 zone (Fibo'50 tranche and the 50MA level), in the daily chart, the rise is expected for ETH to continue. 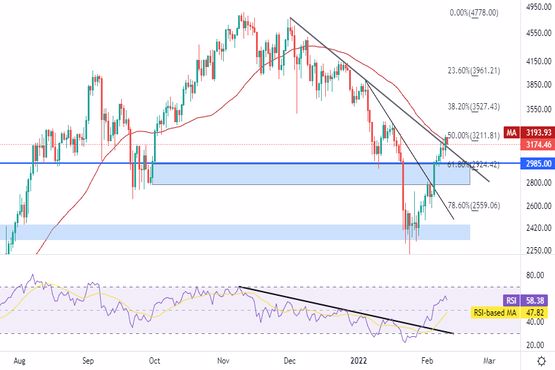 AVAX lost a 1,95% value during morning hours and is priced around $88,50. When we consider the AVAX/USDT pair technically, AVAX, which sharply fell to $50, broke the major resistance level at $79,80 upwards. So, an upward acceleration followed. Following those, it broke the $87,66 level (50MA) yesterday and made the daily close above this level. If it holds onto this level in the daily chart, it can break its downtrend upwards and it is expected to continue its upward momentum. 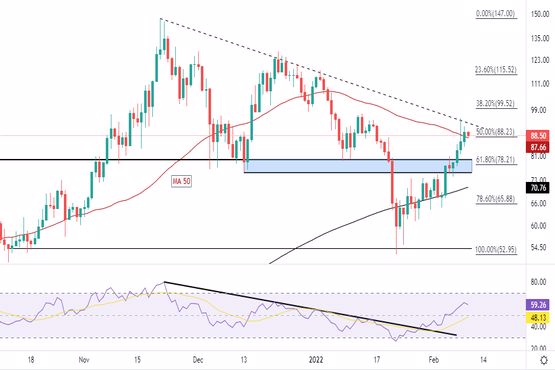 Ripple lost a 0,35% value during morning hours and the current price is $0,8694. When we consider the XRP/USDT pair technically, XRP has finished its sideways trend, as we mentioned in the last daily newsletter, and broke the zone upwards. After the breakout, sharp rises occurred. With these rises, XRP, which broke both the major descending trend and the 50-day moving average upwards, has seen a sideways price movement in the last few days, but we think that the rise towards the level of $ 0.9591, which corresponds to the 200 GHO, will continue. 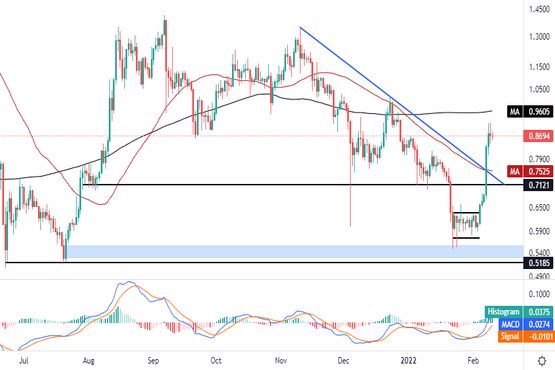 LTC lost a 2,36% value during morning hours and is priced around $137. When we consider the LTC/USDT pair technically, LTC, which has seen a horizontal price movement between $113,1 and $ 104,9 for a long time, broke the sideways and surged towards $145. LTC, which has faced resistance from this zone, is priced at $132.9 and $145, which coincides with its 50-day moving average. The rise towards $145 can be seen, if it does not break the 50MA level downwards. 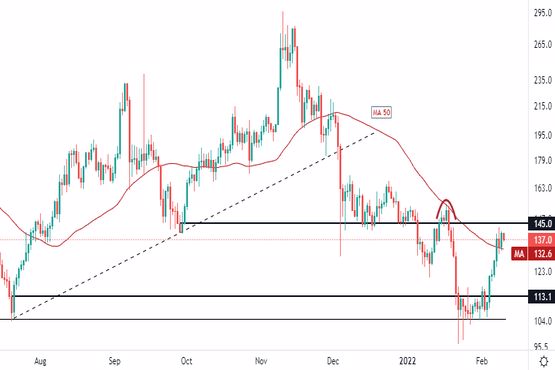 LINK lost a 3,40% value during morning hours and is priced around $18,05. When we consider the LINK/USDT pair technically, there is no major change in the outlook, as we mentioned in the daily newsletter yesterday. LINK continues price action inside the ascending channel as of July 2020 in the weekly chart. And it surged after finding support from the channel lower line. Unless the breakout of the stagnated price movement downwards occurs, a rise towards $20,73 (50MA) can follow. 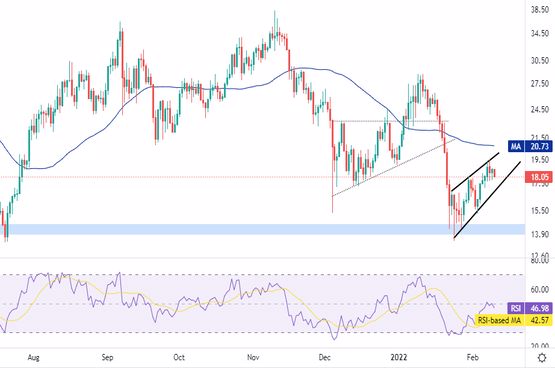 BAT lost a 2,36% value during morning hours, and is priced around $0,9196. When we consider the BAT/USDT pair technically, BAT has repeatedly tested the uptrend on June 2021 and broke it upwards again. It has continued its upward price movement for the last few days. BAT faced a reaction from the level of $0,967, after rising up to the downtrend that existed since November 28 and the Fibo'6180 tranche. If the breakout of the long-term uptrend occurs, a pullback towards the $0.80 levels can be seen. 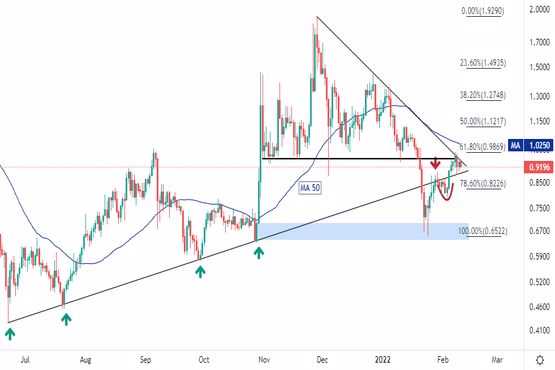