SEC Chairman Garry Gensler has stated that there are legal gaps regarding the cryptocurrencies in the current regulatory system and he wants to work with Congress to regulate the cryptocurrency exchanges.

US Treasury Secretary Yellen has stated that the interest rates are at a very low level and most economists believe this situation will continue. Expectations for a rate hike in the USA point to 2023. However, inflation is expected to increase in the USA due to the pandemic support, and we will see more clearly in the coming days whether this increase in inflation will create a pressure for interest rate hikes.

According to the new law draft approved by the Spanish Finance Commission, Spain-based third party investigation services will start to record customer assets and all transactions regarding these assets  above €50,000 and all revenues obtained from these assets.

In Consensus 2021, Brad Garlinghouse has stated that Ripple plans to go public after the Ripple and SEC case.

South Korea Central Bank Governor Wants to Monitor Crypto Transactions
Bank of Korea Governor Lee Ju-yeol has stated that the leveraged transactions in cryptocurrencies negatively affect the country's financial system and the risk of harming households is high. They are looking for a way to monitor cryptocurrency transactions made through bank accounts, he added.

A cryptocurrency mining research symposium will be held by the government in Sichuan, China's largest hydroelectric mining area. At the meeting, it is planned to analyze the impact of stopping mining on wastewater consumption.

Having called Bitcoin and other crypto assets as “ridiculous” in 2018 Carl Icahn has stated that he wants to be involved in the crypto world “in a big way”, and pointed out that he could make an investment of $1-1.5 billion.

According to the survey released by digital wallet provider Skrill, cryptocurrency adoption among the investors increases rapidly and 38% of respondents have stated that they have invested in or purchased cryptocurrencies.

According to the SEC documents, exchange traded fund company WisdomTree has filed an Ethereum exchange-traded fund (ETF) application with SEC.

Governor of the Central Bank of Nigeria Godwin Emefiele has stated that they will allow Bitcoin and other cryptocurrency trading.

Texas Will Be a Bitcoin Friendly State

In Texas, the senate passed a law that helps define Bitcoin's legal status better for users in the state. After the approval of Texas Governor Greg Abbott, Texas will become a Bitcoin friendly state.

Bitcoin continues at $37,700, with some sellers, in the $40 thousand movement that it started yesterday morning. On the subject of BTC, there are news that the Central Bank of Nigeria will allow cryptocurrencies again. In addition, dominance is at 42 percent in BTC, which has withdrawn sharply after China and Iran's decision to cease mining activities in their own countries. Along with Biden's new $6 trillion infrastructure package, Yellen's bold talk about rate hikes could be limiting risk appetite in the market. Nevertheless, on weekly averages, while Bitcoin's exit from the stock markets has turned negative for the first time since April 22, we read the situation positively at these price levels.

The BTC/USDT pair is priced close to yesterday's closing price of $37,400 in the morning. The market, which started the day with a decline yesterday, erased these losses, and the 40 thousand dollars levels were tested. Volume does not support the uptrend, but we are priced in the $37,100-39,400 range of weekly and monthly averages. In the hourly view, there is a sag under the bullish channel. There is no positive image at the beginning of the week in four hours. Closings above 33 thousand dollars will be important in monthly closings, because the evening star image that starts monthly is not a very strong statement. The $33,000 level, which is an important support point to the previous $65,000 record, and the continuation of the major trend play an important role in keeping the expectations active. Important supports at $37,100 and 36,500 on the day. 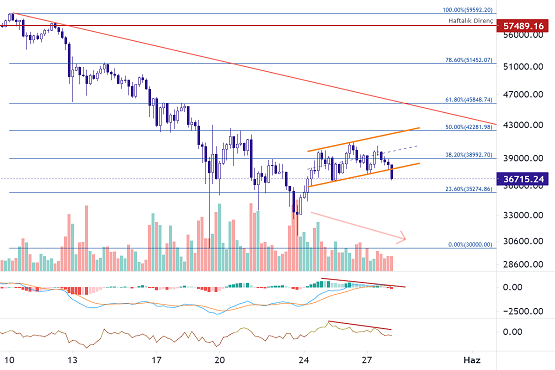 Ethereum continues the day behind 3 percent at $2,650 due to the continuation of the seller session in the Asian session this morning. While the number of ETH in wallets decreased, the amount of ETH in wallets of 1,000 and above fell to a 4-year low. The increase in the amount of ETH entering the exchanges also continued. In ETH, which we have stated that it does not have strong metrics, short-termers are currently on sale, while HODL ones are interested in 2.0. Vitalik Buterin, Founder of the Ethereum Foundation, announced that when Rollup and sharding arrived, Ethereum and Ethereum-based applications will be as scalable as large-scale enterprise applications need.

When we consider the ETH/USDT technically, the pair, which gave the appearance of a double peak the previous day, made a triple peak and released the neckline downwards and started an oscillating movement. The retest level, which we have stated in our bulletins for two days, is passing through the range of $2,465-2,500. As there will be significant support towards these points, we can start looking for a reaction at $2,500 and below. The outlook is selling and weak in the morning hours. 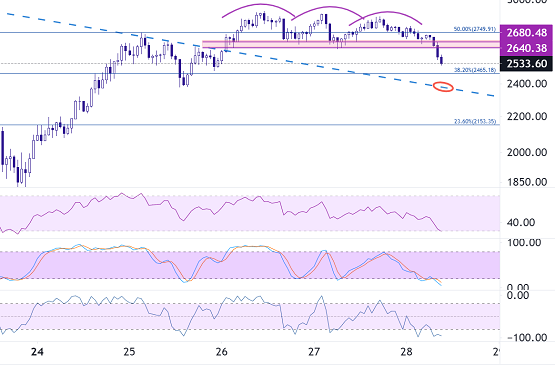 AVAX, which we saw to drop by 6 percent in the morning hours, is priced at $18 levels. When we examine the AVAX/USDT parity in a 4-hour period, we see that the stochastic continues the sell signal and the RSI is above an important support level. AVAX, which could not hold above the Fibo'23.60 level yesterday, declined with sales from this level. The closest support for AVAX, which also broke the minor rising trend downwards, is at $17. We think that with the break of this level, the price movements towards the low level of $12, which it saw on May 23, can be continued. The short-term decline could continue for AVAX, affected by the general pullbacks prevailing across the market. However, if the sales of the Asian market do not continue in the European session, we find these levels appropriate for AVAX. 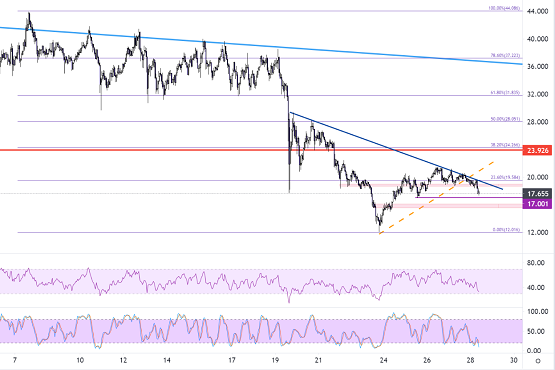 XRP, which we saw falling by 4 percent in the morning hours, is priced at $0.93. We stated in the newsletter yesterday that a letter will be written by the SEC against Ripple. In the letter, the SEC stated that Ripple's continued defense with proof/reply would encourage using the defense when a lawsuit involving non-traditional investment products or other "investment contracts" is filed. This shows us that Ripple's defenses are in fact strong and the SEC is afraid of being affected now and in the future. In a statement made by the SEC, it can be interpreted positively for Ripple that one of its lawyers asked for dismissal from the case. On the other hand, speaking at the Consensus 2021 event, Ripple CEO Garlinghouse mentioned that there are plans to go public after the lawsuit. We read all these developments positively for Ripple.

When we look at the XRP/USDT parity technically, we interpret the daily opening above its two-week average, but it has not been able to hold on to these levels, it has not yet been able to maintain above $1.00, and the levels of $0.90, which corresponds to the weekly average, are a strong support. However, when we analyzed Parabolic SAR, it still generates a sell signal, so we anticipate that it would be healthier buying from the support point and a short-term buy-sell strategy of about 10% price movements in the $0.90, and 0,99 $band which corresponds to the retracement level of Fibo'141.40.

LTC is down about 4 percent this morning, pricing at $187 levels. When we look at the chain data, we see that the MVRV Z-Score value has dropped to 0.027 levels. This metric shows that the price of the LTC is at the buying level compared to its fair price.

When we consider LTC/USDT technically, LTC, which started to rise rapidly with the reactions it received from the bottom level it saw on May 23, has lost its upward momentum. Although the price has risen in the 4-hour period, the falling momentum and the MACD, which is about to give a sell signal by crossing the downside, indicate that there may be short term corrections. We think the minor uptrend and LTC at $188, which is the Fibo38.20 slice level, will make a correction to the Fibo'23.6 slice at $155 as these levels break down. If it breaks the resistance level of $203-207, which it has tested twice in the past days, it will reach the Fibo'50 slice at $218. Short-term bearish movements may be experienced, we interpret LTC as positive in the medium and long-term. 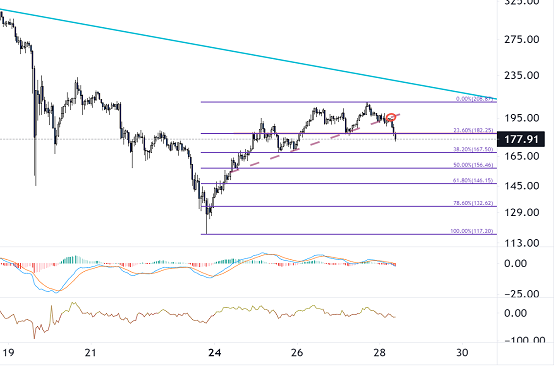 LINK is priced at $30.5 this morning, down about 3 percent. Institutional investor interest in LINK, which is recovering faster than the market, continues. When the investments made by Grayscale in the last 24 hours are examined, we see that they have purchased 832 LINK in total.

When we consider LINK/USDT technically, the momentum broke its upward trend downward in the 4-hour period. However, the MACD, which made a peak, is about to cross the downside. Unable to sustain above $34.4 which is the Fibo23.60 slice, LINK broke down its minor uptrend but is priced above the support level of $29.8. We think that this support level may retest the Fibo38.2 slice, which is the key support level at $26.5, with the break downside. On the upside, $36, which corresponds to the downtrend, is read as an important resistance level. The view is in the direction of benefiting from the rare support. 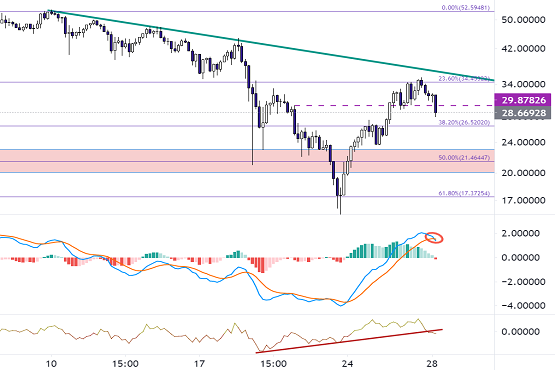 BAT, which lost about 4 percent in the morning hours, is priced at $0.80 levels. When we consider the BAT/USDT parity technically, as we stated in the bulletin yesterday, the 7-day DEMA cut the two-week DEMA upwards and created a buy signal. We think that this signal can also test the Fibo'61.80 support at $0.76 for BAT, which is correcting with the reactions it gets from the channel mid-band and the Fibo'50 slice at $0.94, which is a significant area of resistance. When we look at the daily period, short-term downward movements will be seen for BAT, which broke the downward trend in momentum, but the medium-term outlook is read as positive. 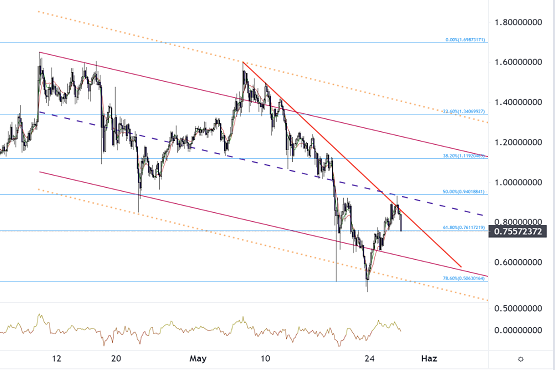