CFTC Classifies Stablecoins as a Commodity

The Commodities Futures Trading Commission (CFTC) has, for the first time, classified tokenized dollar stablecoins as a commodity by entering into a settlement with Tether.

400,000 ETH Was Removed from Coinbase Exchange: Signals for Ethereum's Rise
On-chain data shows that four hundred- thousand Ethereum was withdrawn from the crypto exchange Coinbase on Saturday. This might be a buying activity carried out by institutional investors and signal for an uptrend of ETH.

MicroStrategy, a business intelligence company, makes enormous profits from Bitcoin investments. With the recent price increase in Bitcoin, the company has made a profit of about $3 billion.

Tether Settles with CFTC for $41 Million

The Commodity Futures Trading Commission has announced that it has reached an agreement with Tether Limited for "untrue or misleading claims" about Tether's reserves. Following that Tether, agreed to pay $41 million.

According to data provided by Santiment, the number of Bitcoin whales (addresses with 100 to 10,000 BTC) also experienced an increase with the price up experienced in Bitcoin. Since September 11, more than 250 new addresses have been holding this amount of Bitcoin.

Barry Silbert, CEO of Digital Currency Group, urged his followers to 'keep following' in response to a tweet about the potential to turn Grayscale Bitcoin Trust into a physically supported exchange-traded fund. According to CNBC's report on Oct. 15, Grayscale Investments plans to apply early next week to convert the world's largest Bitcoin fund into a spot ETF.

El Salvador's Vice President, Félix Ulloa, said during a meeting with Vice President of the LATFRAN Association, Pascal Drouhaud, that he recently predicted other countries would also follow the Bitcoin adoption model, according to a report by local media Diario La Huella. At the same time, El Salvador's president Bukele announced that the national demand for BTC is more than the US dollar.

Lummis pointed out that "almost no one is talking about the debt" while lawmakers intensely debate raising the debt limit. "We are getting closer to $30 trillion. Of course, if the spending that is being entertained by the majority party and the Biden administration passes, it will be over $30 trillion,” she warned.

Governments Are Likely to Keep Bitcoin on Their Balance Sheets

US Central Bank Governor Jerome Powell recently admitted that he is beginning to be disturbed by the current inflation levels, which exceed 5%. It seems that this will not ease any time soon. According to many, investing in Bitcoin, the most popular cryptocurrency, can serve as a hedge against inflation.

Bitcoin gained a 0,87% value during morning hours; the current price is $62.074. Our expectation came true, we have been waiting for a long time this news as we mentioned in our daily bulletin. US Securities and Exchange Commission (SEC) approved (ETP) Bitcoin ETFfiled by ProShares, an American provider of private listed products. Along with it, Bitcoin rose to $62.910 and could hold on to the above $60.000 this weekend.

When we consider the BTC/USDT pair in technical terms, BTC failed to break its weekly resistance upward at $58.367 last week. Following the approval of the US futures ETF on October 15, BTC could break it upwards along with the above volume and closed the day above this level. As mentioned in the bulletin on Friday, this price movement has moved BTC to the $60.000. The buy signal from DEMA 7 intersected with DEMA 17 on Sept. 30 is still valid in the daily chart. There is no reversal signal on metrics, our first price target for BTC is the previous peak level of $64.899. 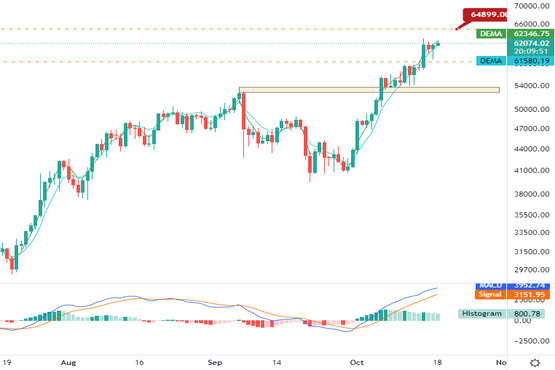 Ethereum lost a 0,10% value during morning hours, and the current price is $3842. After the Bitcoin futures ETF approval in the United States on Friday, the market was rising in general. Along with it, ETH has risen to the $3968 level. On-chain data show that 400 thousand ETH was removed on Saturday from the crypto exchange platform Coinbase. This might be a buying activity carried out by institutional investors and signal for an uptrend of ETH.

When we consider the ETH/USDT pair in a technical sense, ETH, which broke the neckline at head-and-shoulders pattern on September 14 upwards, retested this level at $3685 with sharp pullbacks throughout the market yesterday evening. The next resistance level for ETH, which wiped the loss out along with the support, is $3970. In the daily chart, MACD continues to give a buy signal. Our uptrend expectation towards the $4600 level, which is also the head-and-shoulders pattern target is still valid. 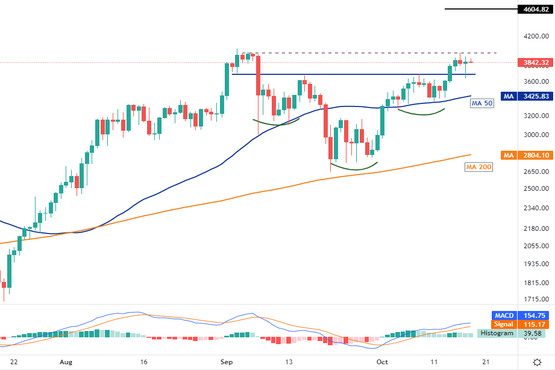 AVAX lost a 0,80% value during morning hours, and the current price is $55,48. When we consider the AVAX/USDT pair in technical terms, AVAX, which has been continuing its price movement within the ascending channel since Aug. 18, is priced at levels near the lower band of the channel. AVAX, which broke the 50MA of $57.62 upward on Saturday, closed the daily close below this level. If AVAX breaks the downward trend existing as of Sep. 23 upward and closes the day above, it can rise to the $80 level (mid-channel). 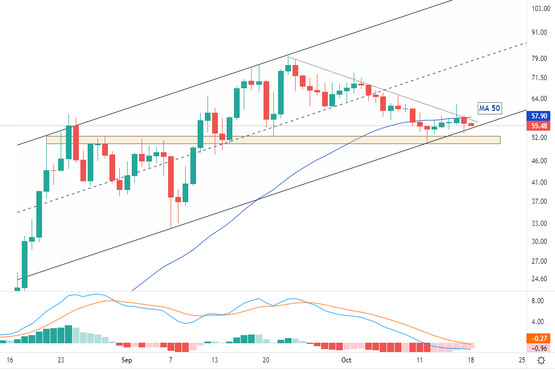 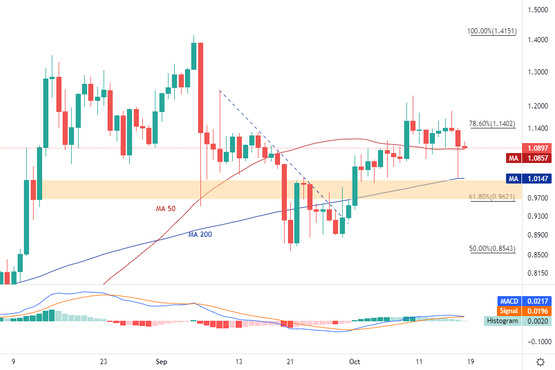 LTC gained a 0,95% value during morning hours, and the current price is $185,3. When we consider the LTC/USDT pair in technical terms, it continues to move between the 200-MA. LTC, which retreated to the level of $175.7 (50-MA), along with the pullbacks throughout the market yesterday, minimized its intraday loss with support. The buy signal is still valid. As we mentioned in the bulletin, the break of the resistance level of 200MA for a long time will trigger a major rise. 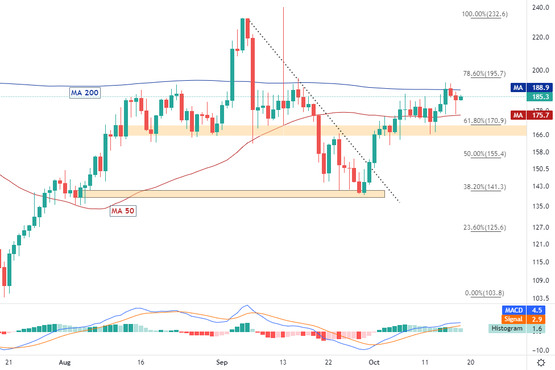 LINK lost a 0,83% value during morning hours, and the current price is $26,29. When we consider the LINK/USDT pair in technical terms, LINK, which held on to the 50-MA ($26.89) this weekend, closed below this level again yesterday with the pullbacks throughout the market. On October 14, the buy signal proceeded when the 7-day DEMA broke the 14-day DEMA in the upward direction, but they are about to intersect in the sell direction again. If the moving average would break upwards, LINK will resolve sales pressure and trigger the upward trend. 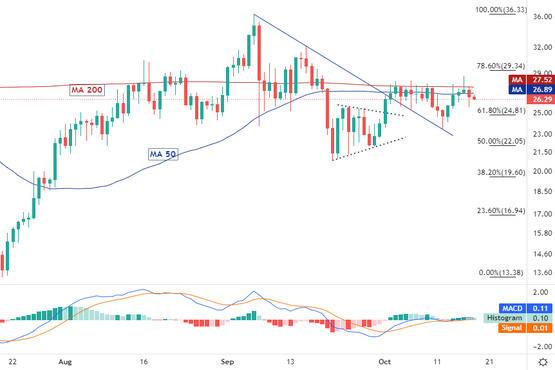 BAT lost a 0,60% value during morning hours, and the current price is $0,6866. When we consider the BAT/USDT pair in technical terms, the BAT rose to $0.7445 (50-MA) on Saturday, saw resistance from this level again, and dropped to $0.6762 (Fibo'50) yesterday. As of today, the MACD has given a sell signal in the daily chart, but in order to confirm this signal, it is necessary to follow the daily close. In our opinion, the price movement towards the 50-MA will continue again as long as there is persistence above the Fibo'50 zone. 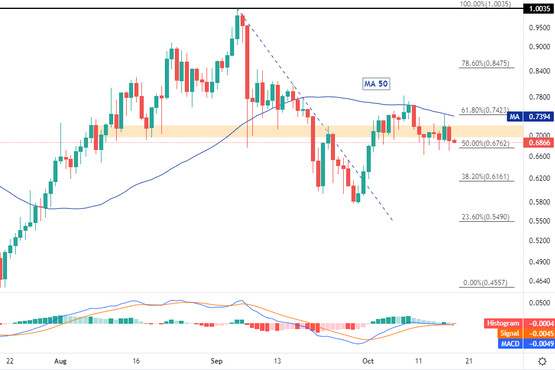