Sparkpool, the second largest Ethereum mining pool in the world, is suspending operations due to the ongoing Chinese crackdown on crypto.

Marion Laboure, Macro Strategist at Deutsche Bank – believes Bitcoin has the potential to become the “digital gold” of this century. However, she expects the cryptocurrency’s price to be “ultra-volatile” in the next few years.

Mining pool F2Pool has started purging miners in China, according to local crypto media outlet 8BTCnews. From now on, Chinese customers will have their accounts suspended or terminated.

Chinese e-commerce giant Alibaba said Monday that, beginning on October 8, it will halt the sales of cryptocurrency mining equipment on its platform.

In a report filed with SEC on Sept. 27, the Morgan Stanley Europe Opportunity Fund, which invests in established and emerging companies throughout Europe, owned 58,116 shares of the Grayscale Bitcoin Trust as of July 31.

Bitcoin's leading second-tier solution Lightning Network(LN) nodes have risen to record levels following an adoption surge. According to the report from the on-chain data provider Glassnode Lightning Network nodes increased by 160% in September to a record high of 15,600.

Bitcoin gained 1,1% value during morning hours; the current price is $42.688. In a report filed with SEC on Sept. 27, the Morgan Stanley Europe Opportunity Fund, which invests in established and emerging companies throughout Europe, owned 58,116 shares of the Grayscale Bitcoin Trust as of July 31. In this way, Morgan Stanley has doubled its investment in Bitcoin.

When we consider the BTC/USDT parity in technical terms, having closed above the $42.235 found at Fibo'61,80 tranche recently, BTC closed below the Fibo'61,80 tranche with a loss of about 2.4 percent, wiping out its intraday earnings yesterday. Metrics do not indicate positive signals in the daily chart for BTC, which has risen again in the morning. Holding above the level of $42.235 in the daily chart will increase the likelihood of price movement on the bullish side. 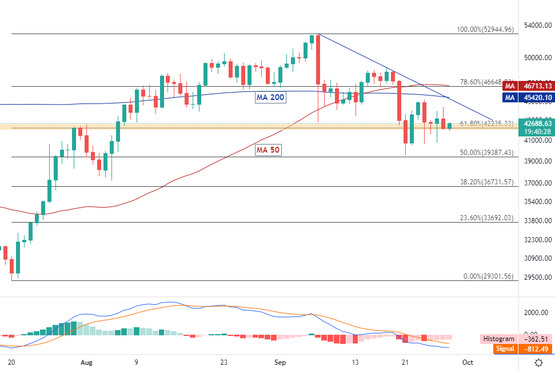 Ethereum gained a 1,35% value during morning hours, and the current price is $2966,53. As we mentioned in the bulletin yesterday, the number of ETH locked in the decentralized financial ecosystem continues to increase, and moreover, we see that the amount of ETH burned has reached 381,524 units, and as of this morning the value is about 1,129,190,241 USD.

When we consider the ETH/USDT parity in technical terms, having risen to the resistance zone at the level of $3160-3200 in intraday price movement yesterday, ETH wiped the intraday gains out along with the reaction from this level. For ETH, which closed just above the $2900 support level with depreciation of about 4.4 percent, it is important not to fall below this level. As of this morning, having retested the $2901 level, which coincides with the Fibo'61,80 tranche, ETH rises with the support level, if the $2901 level remains below the daily closing level, it may cause ETH to retreat towards $2630, where the 200-day moving average is. 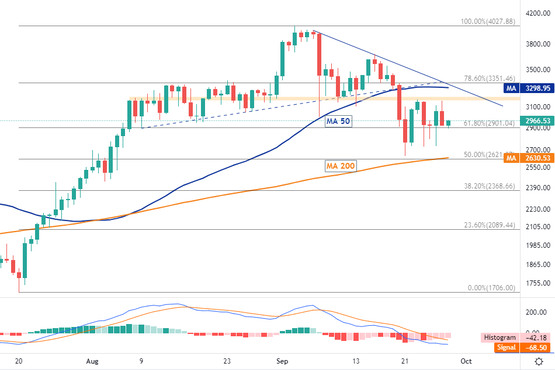 AVAX lost 4,00% value during morning hours, and the current price is $68,82. When we consider the AVAX/USDT parity in technical terms, having a rising channel as of September 9, AVAX found support near $61,81 matched the low channel yesterday morning. AVAX found support and broke its downward trend as of September 23 with the $68 level up, priced at a horizontal band. AVAX can rise towards the $80 where the horizontal channel is, with breaking out of $70,5 price to the upside. If AVAX breaks the $65,5 hitting the descending channel, that can lead to retreat the $52-55 levels. 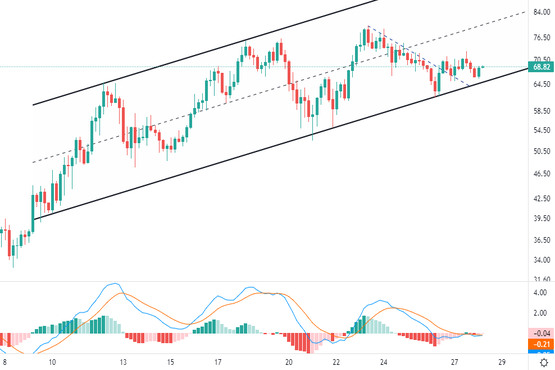 Ripple gained a 1,70% value during morning hours, and the current price is $0,9376. When we consider the XRP/USDT parity in technical terms, having broken the 200-day moving average of $ 0,9585 upward with intraday rises yesterday, XRP could not hold on to this level and closed the day below this level again. XRP has risen again during morning hours, and in the daily chart, stochastic gives buy signals. There are significant resistance levels ahead of XRP positively priced in the morning. XRP broke the minor trend downwards as of September 10, and if it breaks the trend, XRP will resolve from the sales pressure. When retreating, the $0,854 band matched the Fibo'50 tranche should be followed. 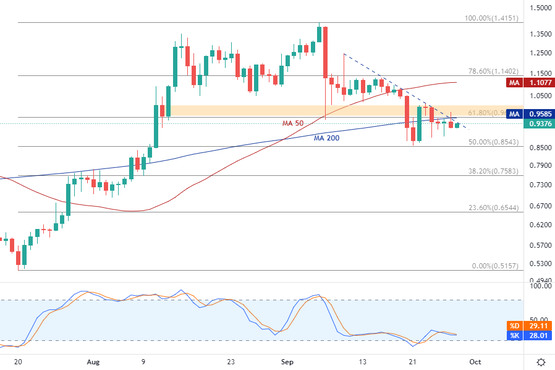 LTC gained a 1,93% value during morning hours, and the current price is $147,8. When we consider the LTC/USDT parity in technical terms, having risen to the level of $155.4 matched the Fibo'50 tranche yesterday, lost about 4 percent along with the resistance from this level. LTC, which has lost 24.81 percent value compared to BTC in the last 3 weeks, is priced behind the market. There are significant resistance levels ahead of LTC. It is important for ETH to break the minor trend downwards as of September 6. If LTC closes above the $155.4 level, the important resistance at the $165-170 levels is the first price target. Price movements near the $141 levels should be concerned within the retreat. 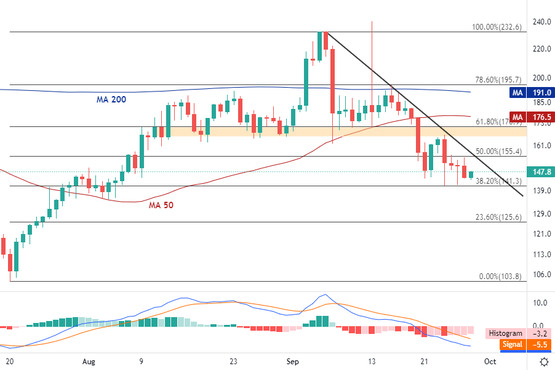 LINK gained a 2,05% value during morning hours, and the current price is $23,48. When we consider the LINK/USDT parity in technical terms, having evaluated by their investors in every retreat movement at the weekend, LINK could not hold above the $24,81 level corresponding to Fibo'61,80 tranche and lost %6,5 value with the reaction. In the daily chart, MACD does not signal positively. If LINK closes the day above the $24.81 level, which coincides with the Fibo'61.80 tranche, we expect it to continue its rise towards the $ 27.7 levels, where it has 200-day and 50-day moving averages, and coincides with the downward trend as of September 6. When retreating, it is important to hold above the $50 level, which coincides with the Fibo'50 tranche. 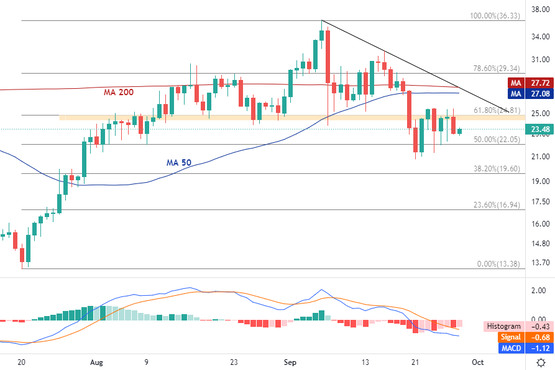 BAT lost 1,25% value during morning hours; and the current price is $0,6165. When we consider the BAT/USDT parity in technical terms, having closed the day near the $0,60 level, which was the dip on September 21-22, BAT retests as of this morning $0,6172 equivalent to Fibo'50. In the daily chart, BAT seems not to hold the Fibo'38.20 tranche, and if BAT cannot break it upwards again, it may retreat deeper. 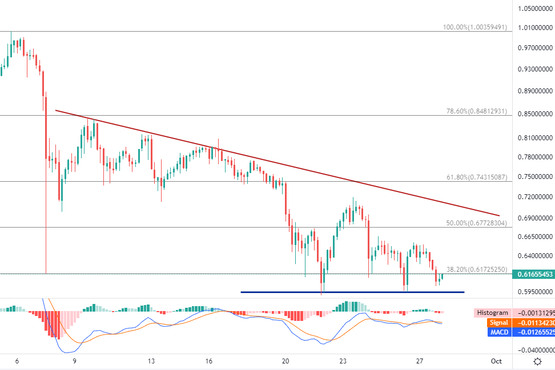