In a recent Squawk Box episode, Senator Pat Toomey called crypto a "really important and innovative new category of finance" and urged the SEC to explain what criteria they use to apply the securities law to cryptocurrencies so that certain regulatory laws can be created.

Ray Dalio: If Bitcoin Succeeds, Regulators and Governments Will Try to Destroy It

Ray Dalio says that if the primary cryptocurrency’s mainstream adoption continues and the asset succeeds, regulators and governments will try to stop its progress. At the same time, he believes that most major countries, such as China and India, are trying to do this.

Fidelity executives, including Fidelity Digital Assets chairman Tom Jessop, met with regulatory officials in a video call on September 8, according to documents from the SEC. In their presentation, the executives explained why the regulator should approve the proposed product.

SEC and Ripple: The Reason Why Ether Is Held Differently from XRP

In a recent tweet, Fox Business' Charles Gasparino claims that sources at the US Securities and Exchange Commission said to him that the reason why Ether is not considered a commodity by the regulator is the built-in infrastructure of the blockchain.

EU to Invest $177 Billion in Blockchain and Other Innovative Technologies

According to Bloomberg, EU officials plan to fund investment in areas such as blockchain, data infrastructure, 5G, and quantum computing, among others.

Sotheby's Will Accept Bitcoin or Ether for $6 Million Diamond Necklace
Sotheby's is auctioning off a diamond necklace designed by iconic jeweler Harry Winston. A prospective buyer will be able to pay with Bitcoin, Ether or USD Coin.

During morning hours, Bitcoin  lost value 1,00% and now is priced at $47,648. Examining on-chain data for Bitcoin, we understand that when we find out the amount of BTC held on exchange reserves on a percentage basis; it is at its lowest levels in the last 3 years and continue to decline.

When we check out the BTC/USDT parity in technical terms, the 50-day moving average crosses above its 200-day moving average on closing price and the golden cross occurs, showing an uptrend. In the daily chart, MACD seems to give a buy signal, and the price broke its near-term resistance above. We can see an acceleration in Bitcoin price concerning the upcoming buy signal of MACD, the short-term price target is $51.000. 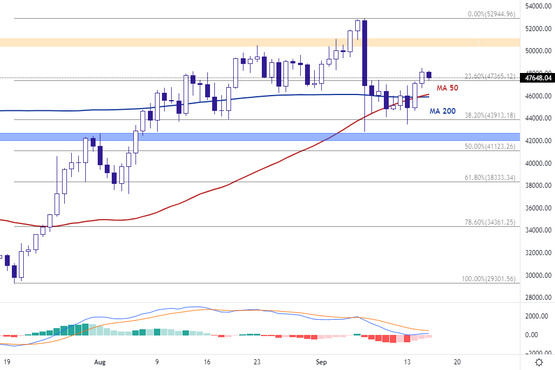 During morning hours Ethereum lost value 1,60% and now is priced at $3395.02. Examining on-chain data for Ether, the net outflow of ETH volume exchanged from the wallets continues in the 7-day average. Regarding the amount of ETH held in the market, we observe it declined to the levels of November 2018. We think that the decline in the supply side is a factor that can move prices up along with the increase in demand.

ETH, which held on to $3375, went up with the support from these levels when we considered the ETH/USDT parity in a technical sense. ETH, which broke both the $3514 level, which corresponded to the 20-day moving average, and the $3531 level, which matched with the Fibo'3531 tranche, along with yesterday's sharp rise, closed the day above these levels. If these retests are successful in ETH, which have retracement towards the support level of $3531 in the morning, we expect the rise to continue towards the $4000 levels. 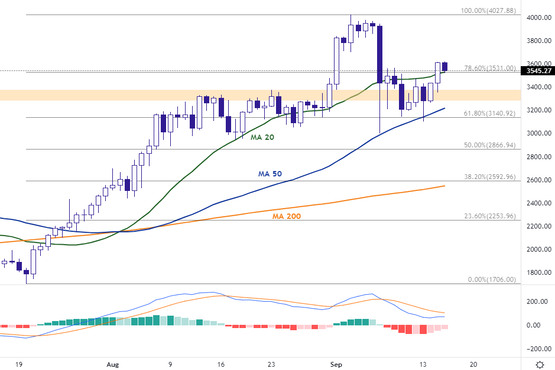 AVAX gained value 3,10% in the morning, is priced at $60,73. AVAX/USDT parity in the technical sense; AVAX, which breaks the downward trend after September 12 when the peak level occurs, and rises to $52,44, retesting the trend successfully and moves with its upward movement price along. During the day, AVAX breaks the $55,87 level upward, which corresponds to Fibo'78,60 trance, and in the 4-hour period, buying signals are notable. If AVAX can hold on to the $55.87, we think that the rises towards the peak of $64.90 will continue. 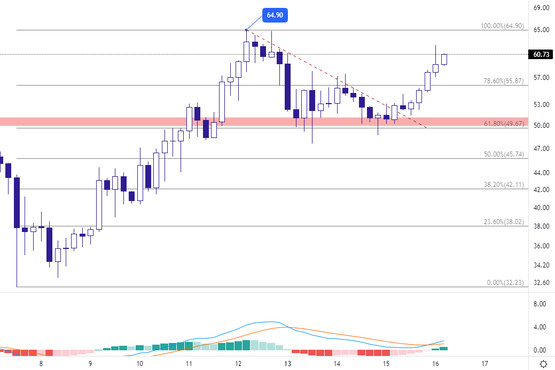 During morning hours, Ripple lost value 1,25% and now is priced at $1,1041. When we consider the XRP/USDT parity in technical terms, XRP, which successfully retested the support zone at $1.0715, which matched with the Fibo'61.80 zone yesterday, continued to rise. In the daily chart, the stochastic keeps its buy signal. Our short-term price target for XRP, near the support level, is $78.60, equivalent to the Fibo'1,222 tranche. 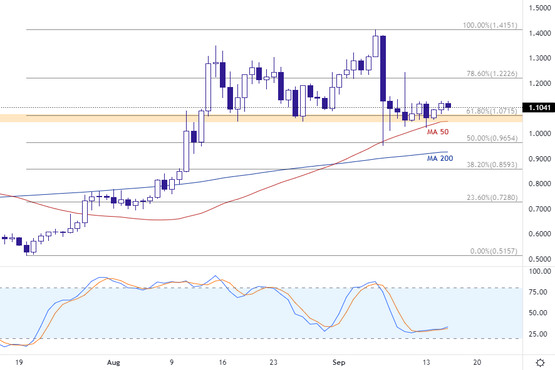 LTC, which has horizontal movement in the morning hours, is priced at $189.5. When we consider the LTC/USDT parity in a technical sense, ignoring the price movement on September 13, LTC, which has horizontal movement price, has priced in areas close to the $192.8 level, which matches with the 200-day moving average after the rises of yesterday. As we mentioned in the bulletin yesterday, what shapes the LTC trend, priced between the 50-and 200-day moving average, will be the break of one of these two averages. Due to market conditions and the fact that when we examine the price movement in LTC, we consider it more likely to break the 200-day moving average up. The rises may gain momentum with a daily close above this average. 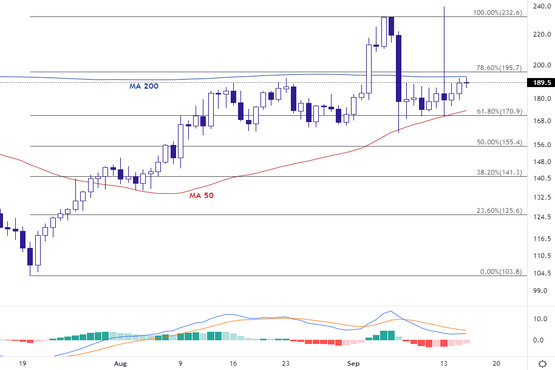 LINK gained value 3,75% in the morning, is priced at $31.81. When we examine the LINK/USDT parity in technical terms, going back to yesterday's price movement, LINK successfully retested the support zone near the $29.33 level. It drew a horizontal candle despite the market-wide raises. When we examine the LINK, which has shown rising on the candlestick open time, we see that stochastic holds the buy signal in the daily chart. For LINK, our price target of $34, which we stated in the bulletin yesterday, is still valid. 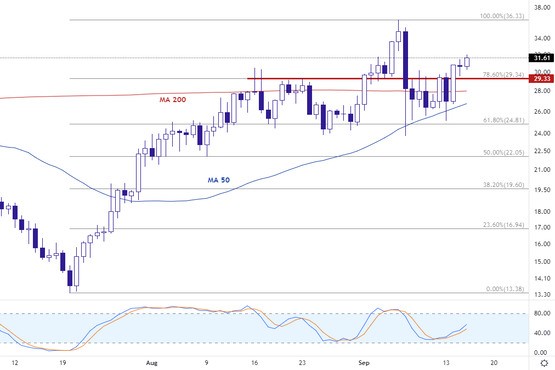 During morning hours, BAT lost value 1,95%, and now it is priced at $0,778. BAT/USDT parity in the technical sense; BAT, which retests the downward trend following September 9 and $0,7948 level corresponding to Fibo'61,80, has retreated to $0,769 where the 50-day moving average resistance is. That signals a MACD buy sign in the 4-hour period for the BAT, which we think the 50-day moving average retest will be successful. We expect a price movement toward the downward trend after the support if BAT breaks the trend; our first target price is $0,8632, matching a 200-moving day average. 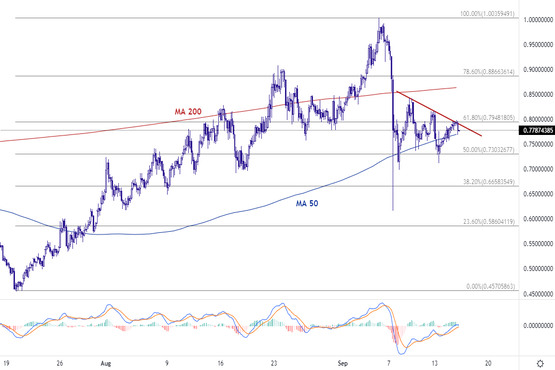