The Shiba Inu team has announced a major partnership with The Third Floor (TTF), the busiest visualization company known to be working on dozens of Marvel blockbusters. TTF will help define virtual environments for the SHIB metaverse project. The American company worked on such projects as "Avengers: Infinity War", "Wonder Woman", "Thor: Ragnarok", "Mad Max: Fury Road" and other important films.

Tesla Sold 75% of Its Bitcoin Assets in the Second Quarter

Electric vehicle maker Tesla sold most of its Bitcoin (BTC) assets in the second quarter, according to new financial statements released on Wednesday. "By the end of Q2, we had converted approximately 75% of our Bitcoin purchases into fiat currency," Tesla said in its quarterly report. "Transformations in Q2 added $936 million in cash to our balance sheet."

Investors No Longer See Crypto as a Long-Term Asset Creator

Crypto Regulation is Coming in the UK

A bill on the use of stablecoins as a form of payment was introduced in the UK Parliament on Wednesday. According to the statement, the developing technology is thus adapted to the financial resources and rules of the country. In addition, Financial Markets Infrastructure Areas will be established for studies and tests in the field of technology. Treasury Secretary Nadhim Zahawi said in a statement: "Today is a landmark day for financial services in the UK."

In BTC, which continued its very strong pricing and broke the 24,000 level, we saw such a strong purchasing power for a long time yesterday. However, there was a big panic sale in the market with the news that Elon Musk, known for his closeness to crypto assets in the balance sheets announced in the US, sold 75% of the BTC owned by the Tesla company. Thus, although Bitcoin broke the 24,000 level that we had been waiting for a very long time, it experienced a return a few hours later.

Bitcoin is priced at $ 22,922 with a loss of 1.31% in the morning hours. Bitcoin saw a big sell due to the news after the 24,000 rise. After falling to 24,300 levels to 22,700 levels, which we can call the critical support level, it saw reaction purchases from here and continued its pricing at $ 23,000 levels. Although the news seems to have ended the positive mood, ETH merge will not be large enough to stop pricing. BTC, which continues its upward trend on the hour, will continue its upward movement as long as it remains above the 22,500 level for now. 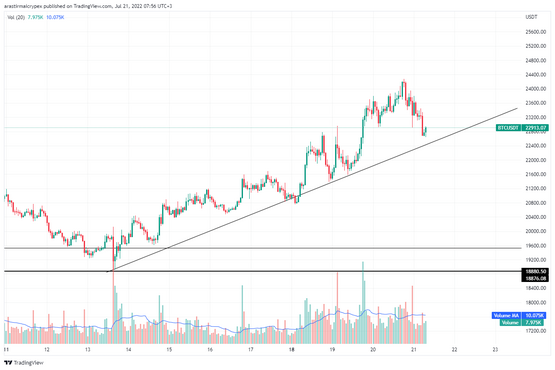 Ethereum yesterday saw sales smaller than $ 1600 levels and managed to fix its price to those levels. It was also expected that BTC would reach the target levels of $ 1700 with a momentum to be experienced. With the news in the evening, there was a panic sale in Ethereum and the price fell to $ 1450. Although the Tesla news has created a panic in the market, we do not think that the Ethereum merge can cut the positive atmosphere it creates.

Today, ETH, which lost 2.39% of its value in the morning hours, is priced at $ 1488. Ethereum continues to rise by breaking all the channels and resistances it is in to the upside. Ethereum, which managed to rise above its 50-day moving average, maintains its target of $ 1700. We can say that it is important to maintain the 1450 level, that ETH is still continuing its upward trend and tends to continue its movement as long as this level is not broken. 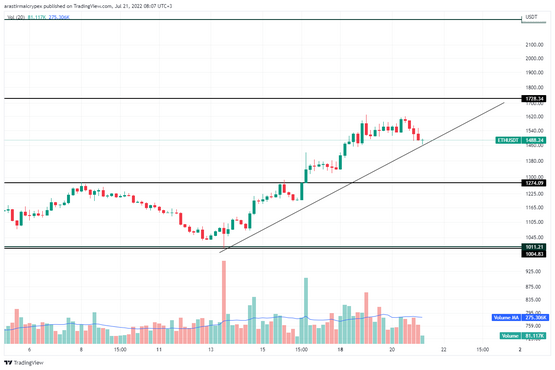 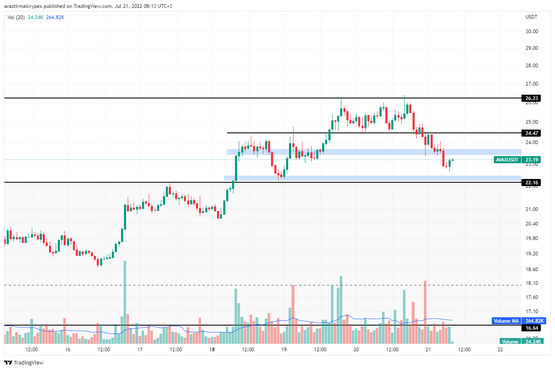 XRP, which gained 1.10% in the morning hours, is priced at $ 0.3770. Although Ripple reached 0.38 levels with the momentum it received yesterday with the breakdown of 0.3672, it could not sustain above the 0.3267 resistance. XRP, which returned to the level of 0.3545 with yesterday's decline, will return to the channel through which it was able to exit in about 25 days in case of a downside breakdown of this level. 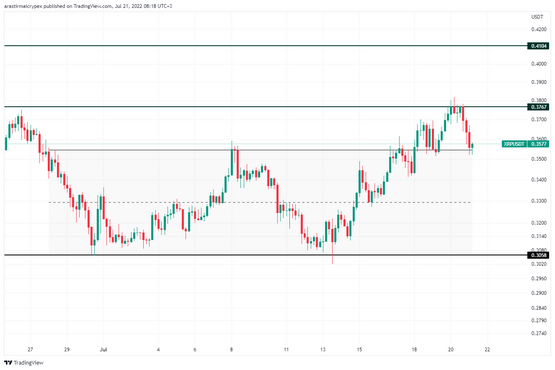 LTC is trading at $56.15, down 1.77% as of the morning hours. After testing the $60.70 level upwards, the market broke down the upper band of the channel it first climbed on with its decline and then the upward movement it made hourly. In a possible decline, we can say that the channel mid-band at LTC 54.66 is the most critical zone and if that region breaks out, we can fall to $ 49.50 levels. 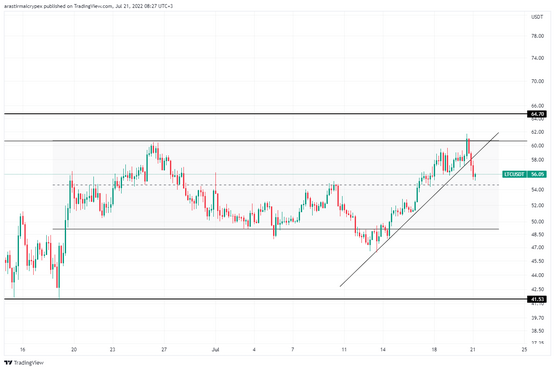 LINK is up 1.40% today at $6,771. LINK, which tested the 7.14 level after the channel breakdown, broke 7.14 to 7.45 after performing double-sided tests between 6.75-7.14. LINK, which returned to the channel upper band of 6.76 with the subsequent sell-off, will return to the channel movement in case of a downside breakdown of this level. 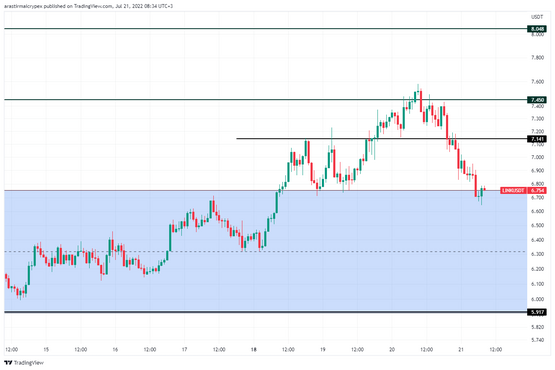 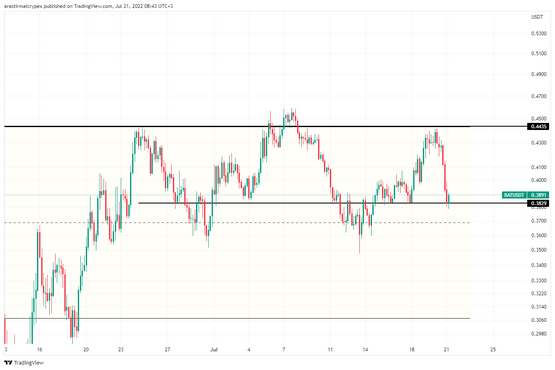