One of the most popular meme tokens, Shiba Inurecorded another all-time high after May 11. Shiba Inu reached its new peak at $ 0.00003940 after its price increased by 42% in just two days.

Avalanche Founder: Adoption of Stablecoin Will Trigger the Success of the Crypto Industry

The founder of Avalanche believes that DeFi and the crypto ecosystem will truly succeed when stablecoins lead the global marketcap.

According to the study, young American citizens know and invest in the digital asset market much more than older age groups.

The Australian senate committee has submitted 12 proposals to change the current license, regulations on crypto assets, as well as taxation laws. Deputies believe that Australia can take the lead in the digital economy if the laws are amicable.

Since Ethereum Improvement Proposal 1559 was activated on August 5, 2021, the total value of Ether burned has exceeded $2.5 billion.

The financial leaders of the G7 countries have agreed on 13 public policy principles for central bank digital currencies (CBDCs) in a move that could pave the way for greater adoption of CBDCs in the world's leading economies. According to a statement from the US Treasury Department, the principles of public policy will be based on transparency, sound economic governance and respect for the rule of law.

The report said that DeFi could be accessed more easily by the population without access to the bank and provided faster solutions for users, but this is still a work in progress.

Walmart Has Installed 200 Bitcoin ATMs in Its Stores

The retail giant has launched a pilot program that adds Bitcoin ATMs to some of its locations. Walmart customers will now also be able to purchase crypto currency from Walmart stores.

Bitcoin gained a 2,10% value during morning hours; the current price is $62.132. The retail giant has launched a pilot program that adds Bitcoin ATMs to some of its locations. Walmart customers will now also be able to purchase cryptocurrency from Walmart stores. We see that there are efforts by institutional investors from different sectors to involve themselves in the cryptocurrency market somehow. This is still at the initial stage; it will gradually increase in the coming process.

When we consider the BTC/USDT pair technically, Bitcoin, which continues to move at price within the ascending channel that exists as of July 20, reacted at the level of $66.200, which coincided with the upper band of the channel yesterday. BTC, which dropped down $60.000 with this reaction, held on to $60.236, which coincided with the Fibo '78.60 zone as of the close of the day. We see a sell signal coming from MACD in the daily chart. If BTC, which had a positive start to the week, wipes out its intraday earnings, we think there may be retracements towards the middle band of the channel with it. 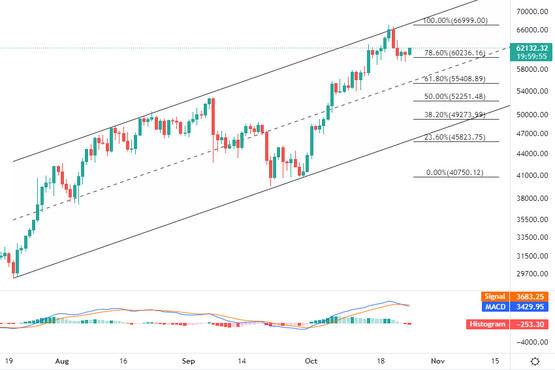 Ethereum gained a 1,50% value during morning hours, and the current price is $4140. Since Ethereum Improvement Proposal 1559 was activated on August 5, 2021, the total value of Ether burned has exceeded $2.5 billion. Institutions continue to search DeFi. The report said that DeFi could be accessed more easily by the population without access to the bank and provided faster solutions for users, but this is still a work in progress.

When we consider the ETH/USDT pair technically, ETH, had had a trading volume below the average over the weekend, started the week with an uptrend. As of October 11, our price target of 4600 dollars, which is the head-and-shoulders formation target, remains valid unless this trend is lost in the ETH direction, which continues to move above the existing uptrend as of October 11. 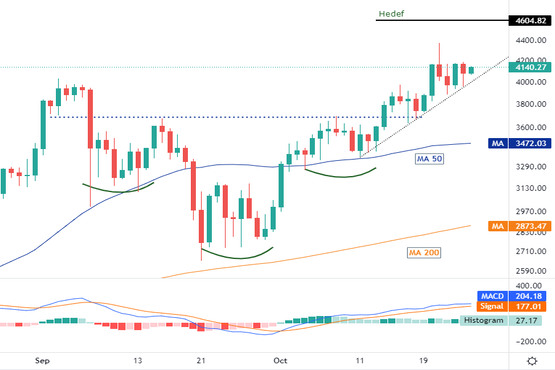 AVAX gained a 1,20% value during morning hours, and the current price is $66,17. When we consider the AVAX/USDT pair technically, AVAX, which has been continuing its price movement within the ascending channel since August 18, recently broke its 50-MA upwards and held onto it in the daily chart. AVAX, which gained momentum upward with this break, experienced retracements with below-average trading volume over the weekend. In the daily chart, MACD gives a buy signal, after a long time. The next technical target for AVAX is $80 (the mid-channel band). 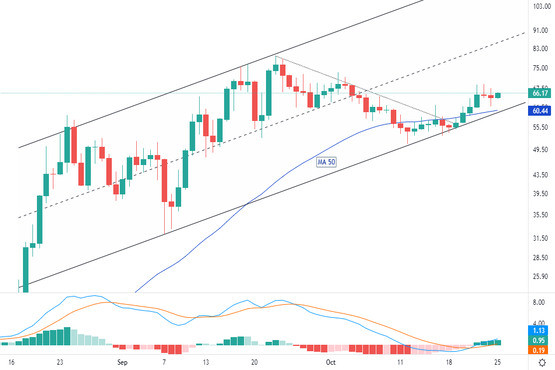 Ripple gained a 0,75% value during morning hours, and the current price is $1,092. When we consider the XRP/USDT pair technically, XRP, which continues to move below the current downward trend as of October 10, is holding on to its 50-MA. Looking at the daily metrics, we see that a sell signal from MACD continues. As long as the daily close does not occur below the 50-MA, it will make a bullish move to test its downward trend again. 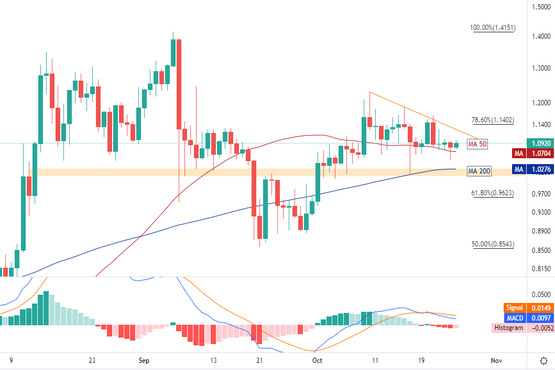 LTC gained a 1,80% value during morning hours, and the current price is $193,9. When we consider the LTC/USDT pair technically, it is holding on to $188, which is equivalent to the 200-day moving average as of October 21. LTC has a stagnated price movement between $195,7  and 200-MA, a break will determine the trend. Although the MACD procceds to give a buy signal in the daily chart, an intersection is about to occur in the direction of a sell signal. Our bullish expectation for LTC remains valid as long as persistence over the 200-day moving average is maintained. 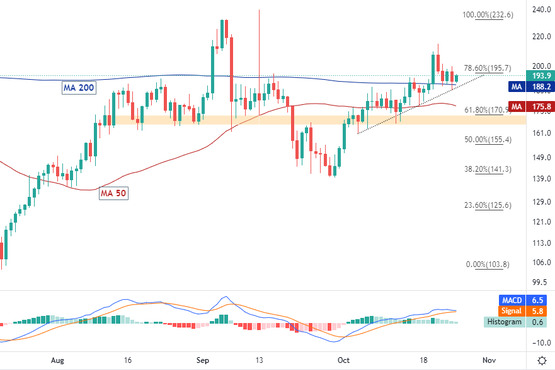 LINK gained a 2,25% value during morning hours, and the current price is $30,30. When we consider the LINK/USDT pair technically, LINK gained a 10% value on Saturday and retreated on Sunday. LINK, which is holding onto the $29.34 dollar (Fibo '78.60), is pricing upward along with the support this morning. In our opinion, the sales pressure has decreased in LINK, which is above its 50-day and 200-day moving averages, and that the rises will continue in the medium term. 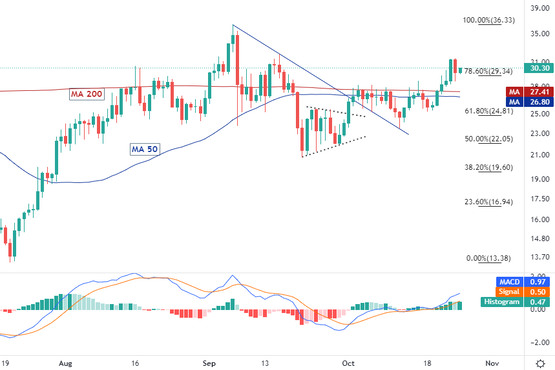 BAT gained a 0,50% value during morning hours, and the current price is $0,6914. When we consider the BAT/USDT pair technically, BAT, which tested the current descending trend as of September 9 yesterday, saw resistance at $0,7227, which coincides with this trend and 50-MA. Along with the retracements experienced throughout the market, Fibo'50 in BAT experienced retracements towards the tranche. As long as it holds above the rising minor trend that exists as of October 12 in the daily chart, we do not expect a downward movement for the BAT, hard rises will come with the upward break of the downward trend and the 50-day moving average. 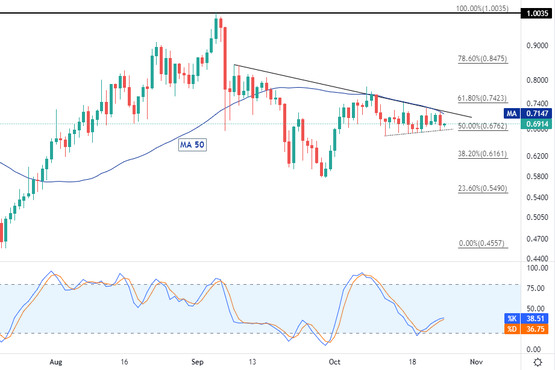