Cryptocurrency investors in Singapore are likely to switch to ETH, and more than a third of Singaporean citizens without cryptocurrency plan to invest in digital assets next year, according to a survey published yesterday.

According to a job ad on the career page of American-based retail store chain Walmart yesterday, the agency is looking for someone with expertise in digital currencies and cryptocurrencies.

A new paper published by Microsoft's research department said it is working on a blockchain-based incentive system to support anti-piracy campaigns, which is the Argus system built on the Ethereum blockchain.

Cryptocurrencies Have Caught the Attention of Governments, KPMG Reports

According to the KPMG report, which examined trends, "governments and regulators' interest in cryptocurrencies" was among the most important developments in the first half of the year.

According to the weekly CoinShares report, there has been an outflow of cryptocurrency funds for 6 consecutive weeks. BTC, which ranked first with $22 million in outflows, was followed by ETH with $1.1 million.

In an interview with CyptoPotato, Colombian PresidentIal Adviser Jehudi Castro Sierra called Bitcoin "the brightest piece of software ever."

Ripple lawyers, in a letter to Judge Sarah Netburn; He noted that the U.S. Securities and Exchange Commission's requests for more than a million Slack messages were "troubling and highly disproportionate." For this reason, they argue the SEC's request should be denied. Ripple points out that several courts have denied similar discovery requests.

Bitcoin, which gained about 1.0 percent in the morning, is priced at $46,346. According to the weekly CoinShares report, there has been an outflow of cryptocurrency funds for 6 consecutive weeks. Bitcoin came in first with an outflow of about $22 million. However, the ongoing positive news flow has led to the colombian president's advisor describing it as "the brightest piece of software ever".

When we consider BTC/USDT parity in technical terms, Bitcoin, which was negatively priced with the opening of the day today, has fallen below its 200-day average of $45,530, but has started to be priced positively again with the support it has found from this region. Priced between the $46,857 level and its 200-day average in the Fibo'50 bracket, BTC is about to signal the sell of MACD's in the daily period. If the 200-day average breaks downwards, we expect a market-wide correction. The initial support for BTC is $42,600. 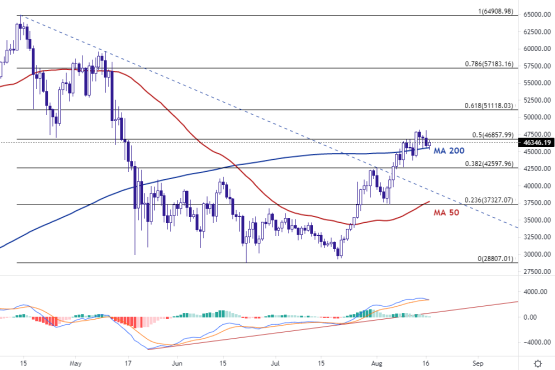 Ethereum, which gained about 1.5 percent in the morning, is priced at $3195. For Ethereum, positive news flow remains dominant. Cryptocurrency investors in Singapore are likely to switch to ETH, according to a survey published yesterday. It's also creating a new system where microsoft ethereum uses blockchain. This newsfeed to support both adaptation and Ether, and the $1.8 billion transferred from exchanges to wallets announced by Glassnode yesterday, will ensure eth's positive divergence in the medium and long term.

When we consider the ETH/USDT pair technically, ETH, which rose to $3335 at the beginning of yesterday, exceeded its previous high, and suffered a retreat from the resistance zone in the $3285-3375 band to $3135. When we look at the daily period, it appears that momentum has broken its existing rising trend downwards as of May 21st, and the sell signal is about to come, even though it has not yet arrived on MACD. Considering these metrics, if the resistance zone in ETH does not break up quickly, withdrawals towards the $2900-2940 zone may occur. 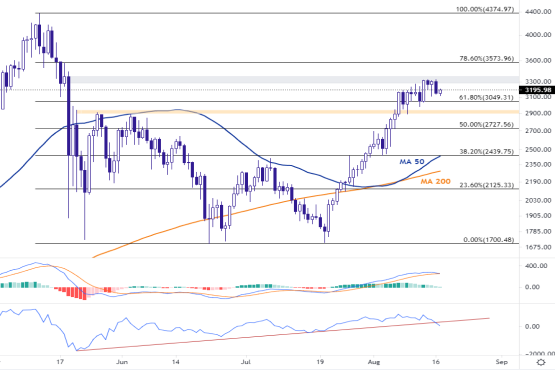 AVAX, which gained about 4.10 percent in the morning, is priced at $19.85. When we examined the AVAX/USDT pair technically, AVAX, priced above $20 yesterday and today, failed to maintain permanence and was resistant to the $20,232 zone, which corresponds to the Fibo'50 tranche. Priced above its current rising trend as of July 20, AVAX maintains its MACD positive outlook over the daily period. If the key resistance zone at $20.23, which corresponds to the Fibo'50 tranche, breaks upwards, it could see rises towards $23.10, which is the 200-day average. 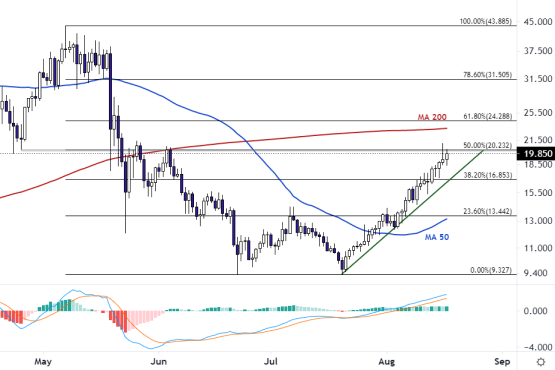 Ripple, which gained about 1.00 percent in the morning, is priced at $1.2036. According to the latest development in the case, Ripple's lawyers wrote to Judge Sarah Netburn saying: "We are not aware of any cases. More than a million Slack messages from the U.S. Securities and Exchange Commission were "laborious and extremely disproportionate," he said. Therefore, they argue that the SEC's request should be denied. Ripple notes that several courts have rejected similar requests for discovery.

When we consider the XRP/USDT parity technically, XRP, which did not hold above the level of $1.2379, which corresponds to 50% of Fibonacci correction levels drawn on the basis of the April 14 peak level and the june 22 low level, closed below this level daily with yesterday's withdrawals. We expect the withdrawals to be sustained at $1,065 for XRP, which has returned about 160 per cent with recent sharp rises. 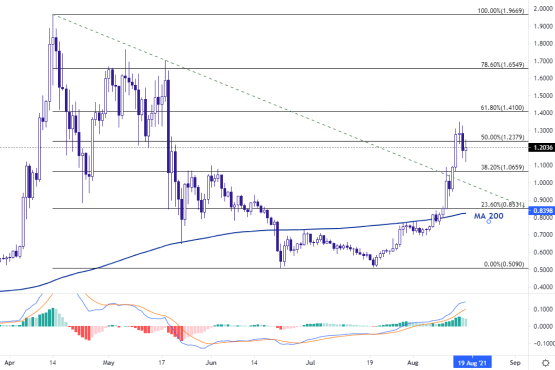 LTC, which gained about 2.00 percent in the morning, is priced at $181.55. When we consider the LTC/USDT pair technically, LTC continues to be priced within the existing rising channel as of July 20, and as of August 13th, it is seen as holding above the Fibo'38.20 tranche of $176. LTC, which broke the channel middle band down at $182.5 with yesterday's withdrawals, is priced just below this level. Short-term withdrawals can be experienced for LTC, where there is a negative discrepancy in MACD over a 4-hour period. If BTC loses its 200-day moving average, LTC could be affected by this pricing, bringing the retreat towards $160. 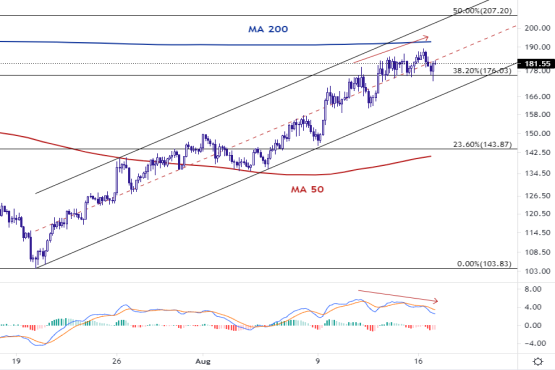 LINK, which gained about 3.30 percent in the morning, is priced at $28.87. When we examined the LINK/USDT parity in a technically 4-hour period, LINK, which we saw continued to move in price within the existing rising channel as of July 20, rose to $30.3, which coincided with the channel mid-band with strong intra-power rises yesterday. LINK, which was met with this level of resistance, fell to $17.05, which corresponds to the channel sub-band. LINK closed just below $27.96, which coincides with its 200-day moving average, and rose above that level in the morning. If it persists, it could see rises towards the next target price of $31.33. The key support level for withdrawals is $22.64, which equates to Fibo's 38.20. 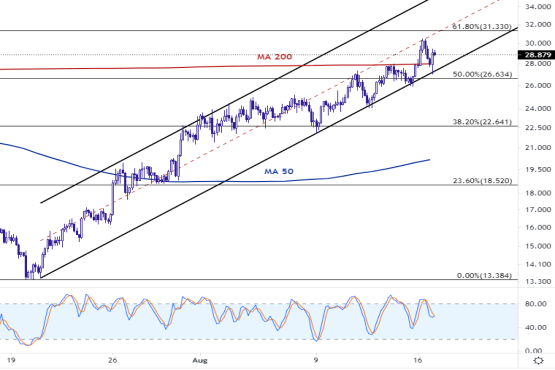 BAT, which gained about 0.90 percent in the morning, is priced at $0.789. When we consider BAT/USDT parity technically, BAT, which is priced above its existing rising trend as of July 20, has not been able to hold above the level of $0.8088, which corresponds to its 200-day average, which it recently broke upwards. When we examine the daily period, there has been resistance for the past two days from the resistance level of $0.836, which corresponds to the Fibo'50 slice in BAT, where the positive outlook prevails. If it loses its upward trend downwards, support levels are $0.71 and $0.65, respectively. 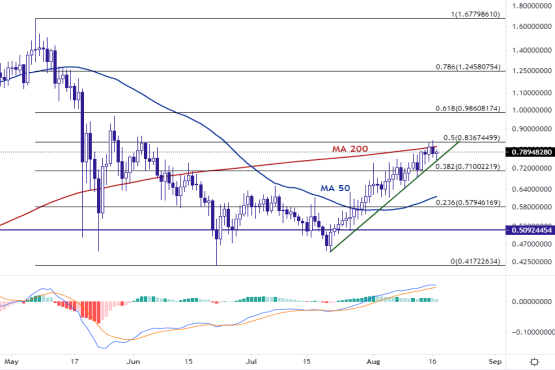