In a statement made by SkyBridge Capital, it is said that fiat money alternatives such as BTC and gold will remain resistant even if the FED reduces its QE (quantitative easing) program, while the company's investment manager Troy Gayeski stated that they will stick to BTC and cryptocurrencies and expect a rise.

Former US President Donald Trump said that while he said that Bitcoin was a fraud, he did not like BTC because it tried to compete with the dollar like other currencies.

MicroStrategy will sell $400 million in bonds to buy more Bitcoin and other crypto assets.

The South Korean Financial Services Commission (FSC) has announced restrictions for senior employees and exchange operators that prevent them from transacting on their platform.

21Shares, which offers investment products, has announced that it will issue a new Bitcoin ETP in the UK in mid-June.

It is stated that the Basel Committee will hold an advisory meeting on the connection of banks with cryptocurrencies.

Paraguay National Congressman Carlitos Rejala announced on Twitter that the country is ready to legalize Bitcoin.

Ripple; Due to the fact that the documents produced by the SEC for BTC, ETH and XRP have not yet been submitted to the lawsuit, Judge Netburn requested a date for the request of these documents.

Elon Musk was targeted in the video belonging to the Anonymous hacker group. While it was claimed that Tesla was forced to criticize Bitcoin for getting the government's financial support, there was a call to end it.

Biden To Talk About Cryptocurrency And Ransomware At G7 Meeting

It was stated that US President Joe Biden will speak directly at the G7 meeting about the role of cryptocurrencies in the attack on ransomware breaches.

With the new update that provides many in-code optimizations, unnecessary interfaces and common codes have been removed. In addition, it is aimed to create automatic structures that work on multiple platforms.

The sales, which started yesterday afternoon in the crypto money market, continued in the Asian session, and when we look at the Bitcoin price this morning, we see that the transactions passed at $ 32,600 with 3 percent sellers. While the reason for the sales was shown yesterday as Trump's characterization of BTC as a fraud, statements from Biden are also expected at the G7 Leaders Summit, which Biden will attend on June 11-13. With the stress created by this situation, BTC daily transaction rates are at the lowest level in two years.

When we consider the BTC/USDT parity technically, the BUY signal from DEMA in the last week has turned into SELL. We can say that this strategy, which came from 36 thousand, stopped in the 33 thousand region. However, the reactions after the Asian session should be evaluated. While 34,100 and 35,400 $ levels are our important resistances, 37 thousand can be expected to be tested if it breaks. 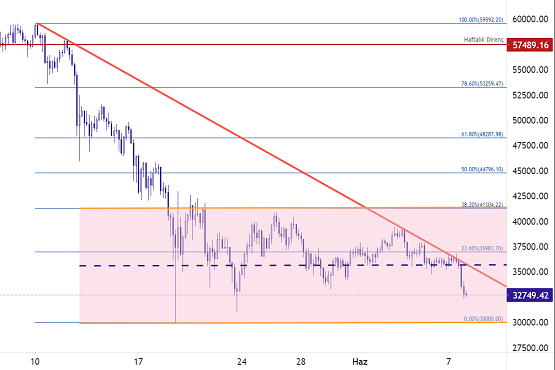 Ethereum is trading with over 4% sellers this morning. Yesterday, we mentioned that ETH could experience more depreciation or BTC could experience more value gains at the ETH-BTC split. Transaction fees continue to decline and there is also a slowdown in transactions passing through the network. According to the CoinShares report, ETH continued to be bought last week. The funds purchased $33.1 million in ETH last week.

When we consider the ETH/USDT parity technically; ETH, which we expected to $ 2900 with the buy signal yesterday, returned from $ 2845 due to Trump's statements. ETH is in the squeeze triangle after the discourses that led to the disruption of many strategies. ETH price dropped to the Fibo'38.2 tranche after the decline and found support at $2465. If it can maintain this intraday support, we think that the reactions could be up to the $2700-2750 levels first. 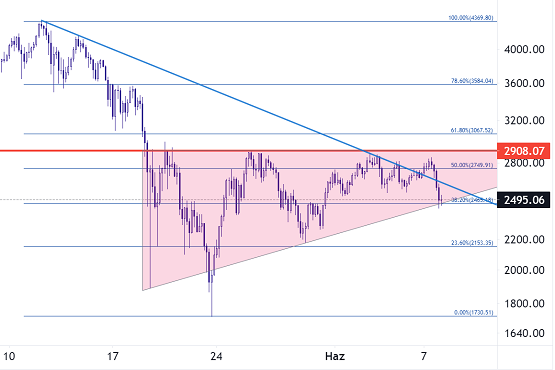 AVAX has gained about 3.2 percent this morning and is priced at $15. We see that project and agreement-based developments continue in AVAX. With the new statement, it was reported that developers can now create smart contracts on Avalanche using the Chainlink network. When we examine the AVAX/USDT parity technically, it broke the support levels of $ 17.00 and $ 15.60 with the prevailing sales in the market yesterday evening. When we examined it in the 4-hour period, as we mentioned in the bulletin yesterday, stochastic could not break the resistance at 30s levels and gave a sell signal. Although Stochastic and RSI are in the oversold region, we cannot say that the downside movements are over in the short term unless the support at $ 15.60 is reached for AVAX, which has lost important support levels. This region can be considered as a buying opportunity for AVAX, whose next level of support is at $13.50. Considering the volatility and selling pressure in the market, we think that using a stop-loss or buying in pieces would be a more appropriate strategy. 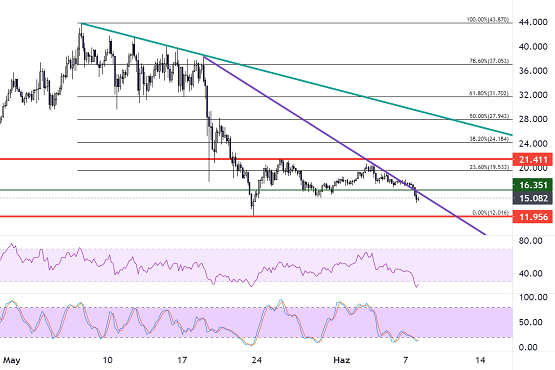 XRP, which fell 1 percent in the morning hours, is priced at $ 0.85. Although we see a decrease in XRP with the general decline in the market, according to the weekly report published by CoinShares, we see that there was a $ 7 million fund inflow to Ripple last week, that is, there is demand for XRP by institutional investors. Ripple, whose litigation process continues; He requested Judge Netburn to set a deadline for the SEC to submit the documents it produced for BTC, ETH, and XRP. The response by Judge Netburn to this request is very important because the SEC has yet to submit these documents to court, despite being ordered twice before. This issue is very important to the progress of the case and the failure of the SEC to submit the documents may even cause the case to be dismissed. We maintain our positive view for the medium-long term, as the litigation process continues positively for Ripple and is requested by the corporate.

When we examine the XRP/USDT pair technically, it broke the $0.9375 support again yesterday and closed below the daily. XRP, which broke the rising minor trend from the low level of May 23 to the downside from $ 0.922, fell below the 14-day DEMA level of $ 0.87 with the accompanying sales. In XRP, which gave a buy signal with the intersection of 7-day and 14-day DEMA on May 30, these 2 levels are about to cross downwards again. However, we think that the short-term decline may continue for XRP, which is priced above the support level at $ 0.78, and buying opportunities close to the support can be evaluated. We read the long-term outlook as positive, given the positive news flow. 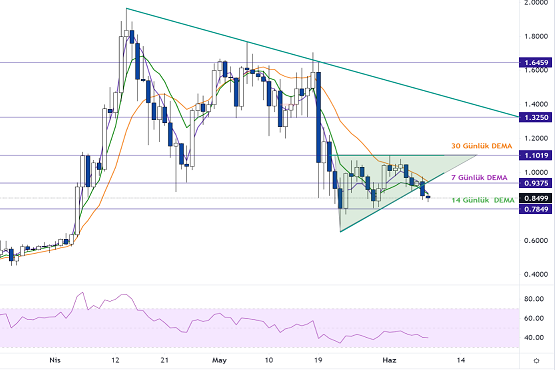 LTC is priced at $157, depreciating by about 3 percent this morning. A selling market is dominated by Trump's statements and negative news flow. Although the chain data is positive in the macro outlook, the news that is effective in short-term price movements puts prices down negatively. The MimbleWimble update for LTC will be improved. With this update, which provides many in-code optimizations, unnecessary interfaces and common codes have been removed.

When we look at LTC/USDT technically, LTC, which surpassed the secondary descending trend that had been tested yesterday on May 10 at the same time as the record level of $ 420, could not sustain above this trend. LTC lost the support at the $173-176 band and declined below the $156.75 level, which is the Fibo'50 tranche, with continued selling pressure. When we examine it in the 4-hour period, we see an increase in the transaction volume on the selling side. However, the selling stochastic is about to move into the oversold territory. If it fails to hold above the $156.75 level, $146, which is the Fibo'61.80 tranche, is read as the nearest support level. 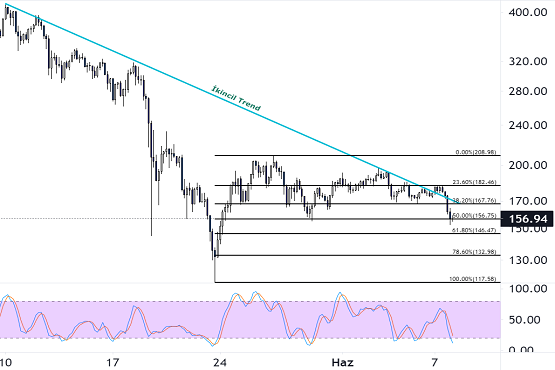 LINK is priced at $23.70 this morning, depreciating by about 3.3 percent. According to the new statements, developers can now start creating connected smart contracts on Avalanche using Chainlink's decentralized oracle networks. Although positive project-based developments continue, there are negative pricing due to the negative news flow that dominates the market.

When we consider the LINK/USDT parity technically, it is priced below the secondary descending trend that has existed since May 10. Having dropped below the support level of $26.20-26.90 yesterday, LINK seems to have found support at the next support zone at $23.50-24.00. Stochastic in the 4-hour period gave a sell signal yesterday. Although the RSI and stochastic are in the oversold region, we think that short-term pullbacks may continue due to the increase in trading volumes on the sell side. The levels close to the support at $ 21.40, which is the Fibo'50 slice, can be considered as a buying opportunity. 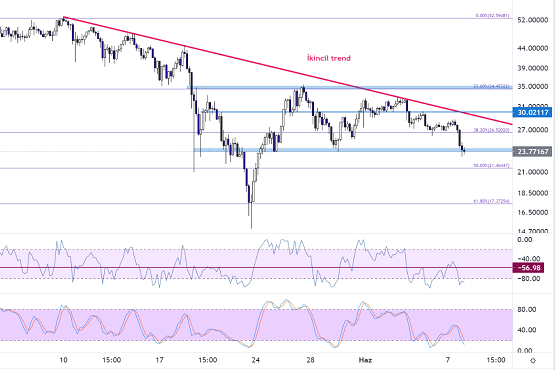 BAT is priced at $0.678, depreciating by about 1.90 percent this morning. When we look at the BAT/USDT parity technically, BAT, which was priced in the region close to the downtrend yesterday, could not break the resistance at the level of $ 0.78. From this level, it started to decline with the market-wide selling pressure and cut the $0.735 level, which is the Fibo'38.20 tranche. When we examine it in the 4-hour period, the stochastic, which gave a buy signal yesterday, turned to sell and the RSI lost important support levels. We think that short-term pullbacks may continue. If BAT fails to hold in the $0.65-0.67 band, we think the support level at $0.57, which is the Fibo'50 slice, is suitable for buy positions. 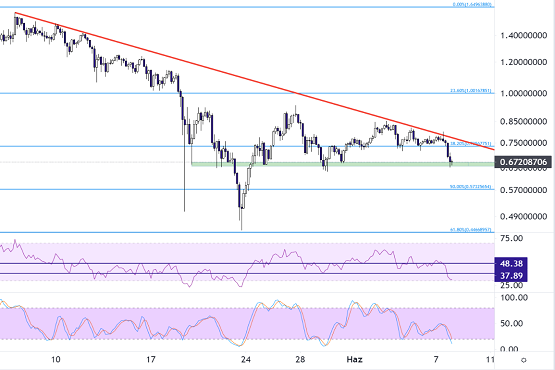