The South Korea Financial Services Commission (FSC), the country's largest financial regulator, has issued an announcement that it will bring internal control to cryptocurrency exchanges and that data on all suspicious transactions should be retained.

Incentive Package Approved by the Parliament

The US House of Representatives approved the $ 1.9 trillion stimulus package. As a final stage, the signature of President Joe Biden is expected to arrive in the next few days.

FOMO Too High In Bitcoin

According to a survey conducted in the UK, 30% of people think they are late to invest in Bitcoin. Research by a London-based crypto fund reveals that 85% of 100 asset managers are currently invested in BTC.

According to Chain Data, BTC Will Not Drop Below $ 48K

According to a current analysis shared by chain analytics company CryptoQuant, Bitcoin will not fall below $ 29,000 until the end of 2021. And the probability of testing $ 48,000 in the near future is very low, according to the analysis.

LG Goes Into The Cryptocurrency Business

South Korean bank Shinhan Bank announced that it has started working with LG for the digital version and production of the South Korean currency. Thus, LG and Shinhan Bank will become partners for the new central bank pilot programs.

The number of new Bitcoin ATMs installed worldwide since March 2020 has approached 10,000. According to the latest data from Coin ATM Radar, the number of available machines showed a strong 57.5% increase compared to 7,152 last year.

It has been seen that 108 million XRP has been transferred to exchanges from Ripple's former partner Jed McCaleb's wallet in the past week. After the transfer, the balance of McCaleb's wallet fell to approximately 537 million units of XRP.

Ripple presented its defense against the SEC to the judge on March 4. The SEC responded to Ripple's statements on March 9 and forwarded it to the court. The SEC's report insisted that Ripple's claims were invalid and that XRP was a security.

A group of representatives in the US presented a new bill stating that the Securities and Exchange Commission (SEC) and the Commodity Futures Trading Commission (CFTC) must work together to assess cryptocurrency regulations and address uncertainties.

Nusret Gökçe, who became a world-renowned name as "Saltbae", made his tweet, which he shared in 2017 and became a trend, and presented it to auction by turning it into NFT.

Bitcoin is trading a slight horizontal depreciation at the $ 55,600 level this morning. There are two different situations and divergences in Bitcoin wallets. While the number of wallets with 10 or more coins decreases, there is an increase in the number of wallets with 10 and below. In the process of testing $ 57,000, there is a decrease in the amount and number of BTC withdrawn from the exchanges. There are also serious decreases in miner sales. Although the market has not been able to draw a general direction for itself for the following few days, we infer that institutions are not yet triggered for buying. Grayscale announced to the Bitcoin fund (GBTC) that it is closing new purchases. He will probably wait for the market outlook to become clear, as GBTC's value risk premiums have been negative for some time.

When we consider the BTC / USD parity technically, it is priced at $ 55,000, accompanied by the steep rising trend formed in the bullish channel. It was the first time since the record of $ 58,000 to close above $ 55,200 support. Weekly and monthly supports in withdrawals exceed $ 55,200 and $ 53,800. Although the outlook is up, the market's instability and the slowness in the number of new participants are causing the prices to lock behind $ 58,000. However, since we are in an upward trend, withdrawals can be evaluated by the market as a reaction in the support zone. 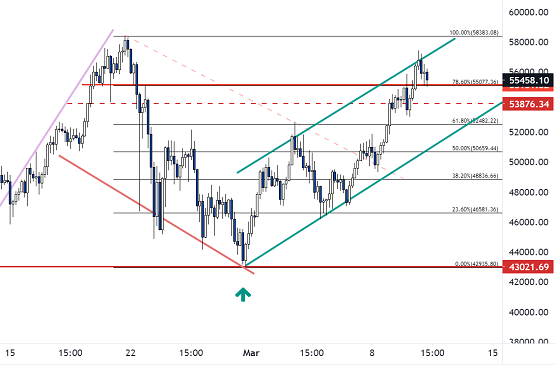 Ethereum is pricing just behind the $ 1800 level, with a horizontal change of $ 1780 this morning. The Asian session is still with sellers, but the risk appetite in stocks does not cause panic on the cryptocurrency front. Finally, the number of ETHs that have been inactive for 1 and 3 months in active supply has advanced to a two-year high. According to the MVRV rate, Ethereum seems to be discounted considering its adjusted (real) price and market price. In response to the EIP 1559 improvement, which will be completed in July, Ethereum miners announced that they will attack the system that will last 51 hours on April 1, citing the decrease in their income. Although there is no such thing as a system crash or hacking, it is not positive news in terms of price development.

When we consider the ETH / USD parity technically, the target of the double top formation in the $ 1880 region within the bullish channel points to the lower band of the channel, $ 1650. The momentum turned negative in the MACD, but the morning sales were also below average. Therefore, the fact that sellers are in the background in terms of volume is not a decrease in prices, it shows that these retreats are very short corrections. The view is horizontal but positive. 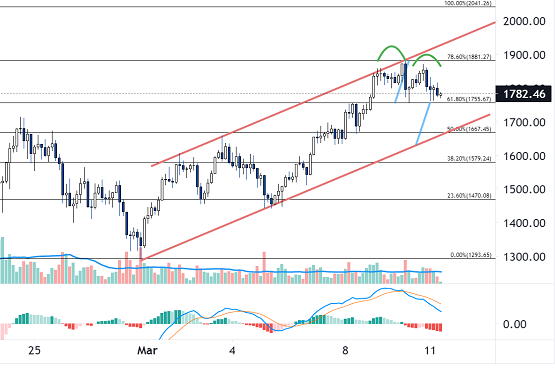 Avalanche is pricing above the $ 30 level this morning, up 0.8%. After the response from the $ 25.00 support zone, the pair rose by 40% and thus, the market value rose in the rankings due to both the increase in circulation after the lock opening and the positive effect of prices. For AVAX, which is currently in the 24th position, our three-digit price targets are preserved in the long term, but it is expected to exceed the $ 35.00 resistance zone for a short-term positive trend. 7, 30 and 60-day moving averages will be useful in analyzing support and resistance levels. The pair remains below the 7-day average, which is a more fresh indicator, even though the ongoing horizontality has pulled the 30 and 60-day averages down. For this reason, we cannot say that the trend is strong for now, considering the last two-day candlestick closings, but the developments supported in the fundamental direction increase the potential for AVAX and strengthen the expectations. 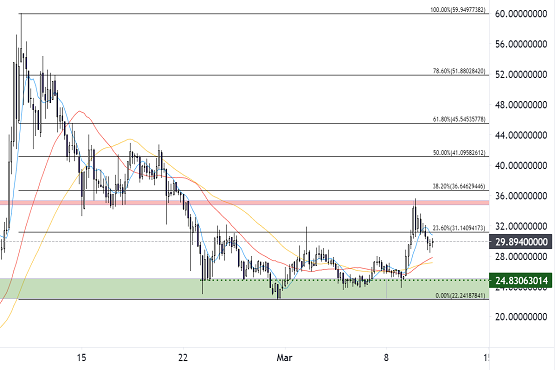 Ripple's defense letter to the New York Court on March 4 was responded to by the SEC with a counter-letter the previous day, and we analyzed the aforementioned documents in detail. It is clear that Ripple's defense is made to increase positive perception in XRP by investors on many platforms, especially Twitter. In addition, it cannot be denied that defense strategies are powerful. But for XRP investors, there is a keen attitude on the SEC side and arguing that XRP is clearly a security, adding to uncertainty. For this reason, the fact that the parties will continue to provide evidence until August 16 still raises questions for XRP. However, looking at the process that progresses outside the trial, successful collaborations are created with many institutions, including central banks.

When the XRP / USD parity is technically examined in a 2-hour period, the pair has been horizontal as of February 24 and has formed two horizontal channels. The $ 0.45 level is the lower band and support level of the minor channel. The middle band of the major channel is $ 0.44 and is the second price support level. The $ 0.47 and $ 0.49 resistances will be followed for possible responses. Voluminous increases above these levels are required to leave horizontality behind. Oscillators are giving an upward signal in a 2-hour period. For now, the horizontal trading strategy continues. 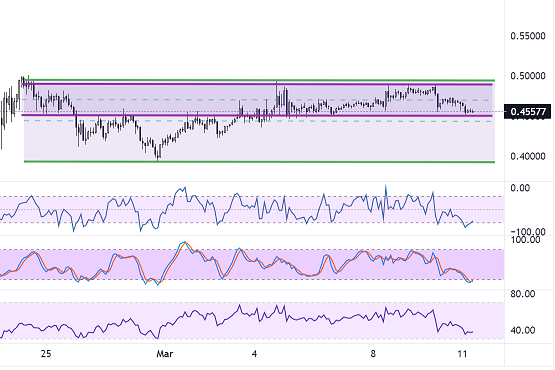 Litecoin has lost 1% on a daily basis as it retreated to the $ 198 zone this morning. With Bitcoin's testing of the $ 57,000 region, BTC, whose monthly returns reached 19%, seems to be 10 points higher than LTC. Since the correlation values ​​of the BTC-LTC pair are very high, we know that they will want to converge. On the other hand, the resurgence of BTC dominance and the increasing interest in BTC indicate that Litecoin will be the convergent for now. This means 10% return potential. On the other hand, when the chain data called Realize Cap is examined, it is seen that the market value of LTC is above the spot price for the first time in the last two years. This shows that LTC remains discounted compared to the market.

When the LTC / USD pair is technically analyzed, the pair continues its positive course on the minor uptrend, but the $ 204 level has become a critical resistance. Because above this level, the appetite for purchase increases and below this level the appetite for sales increases. Therefore, when the $ 204 Fibo'23.60 correction zone is crossed, the initial resistance will be $ 246 as long as the uptrend remains above. The cruise is slow but positive. 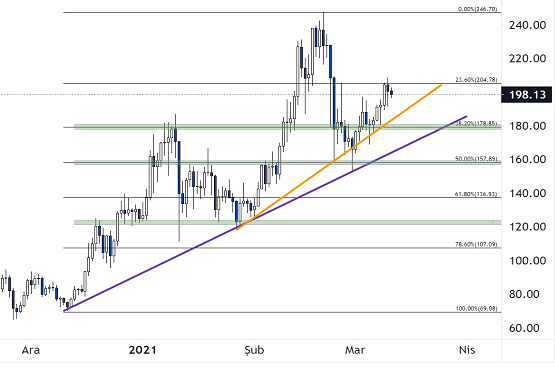 The LINK / USD pair is retreating by 2% this morning, pricing in the $ 29.40 region. Chainlink announced partnerships this month that it will be active in many platforms such as staking feature and acceptance as a payment tool. Still, the ETH consensus market cap in the yield spike has lagged behind ETH this week as the largest token. LINK has a weekly return rate of 2% and Ethereum is above 15%.

When the LINK / USD parity is examined technically, after testing the $ 31.00 zone, the pair has retreated to around $ 28.85, where selling pressures deepened. However, the $ 28.85 level above the Fibo'50 tranche worked as a support zone for pricing, bringing a positive response. An upward break from the $ 30.40 channel mid-band followed by the $ 30.75 levels could revive the $ 33.50 Fibonacci retracement level. 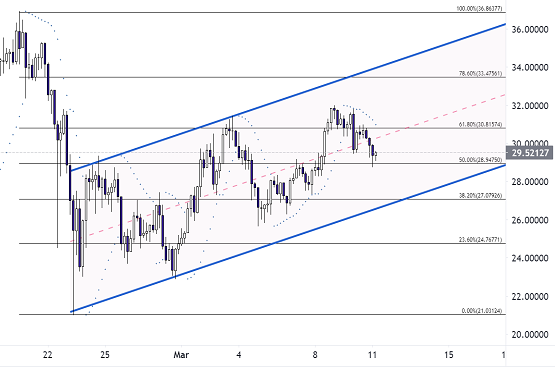 The BAT / USD parity was one of the most positively differentiated coins of the day, providing a 20% return at the closing and opening of a single 4-hour candle in the evening hours of the previous day. Thus, our first flag target, which was technically mentioned in our previous bulletins, came close with the testing of the $ 0.90 region. At the same time, the surpassing the $ 0.80 level confirmed the second flag formation, signaling the continuation of a technically new bullish scenario, which includes a fraction of $ 1.00 and just above. The course is positive but suddenly rising yield values may bring along a short-term consolidation or correction. When the short-term probabilities are neglected, the parity is quite positive for the medium-long term. 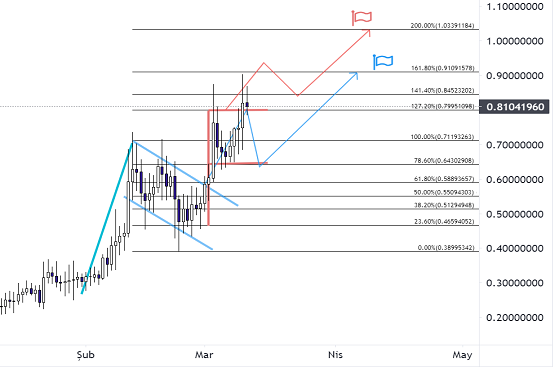