South Korea Prime Minister Chung Sye-kyun has announced that they are working on Blockchain based digital vaccine passports to the immunized citizens in order to revive cross-border travel as well as keeping infection risks under control.

"The pandemic has made the economic divides worse" said US President Joe Biden in the Pittsburgh presentation of the $ 2.25 trillion infrastructure and employment program. Biden has also stressed that it is time to rebuild the US economy from the bottom to the top.

The leading cryptocurrency Bitcoin has just closed six consecutive monthly green candles for the first time in the last 8 years. In 2013, Bitcoin had closed almost to $ 140 after posting six green monthly candles in a row.

BlackRock Has Been Secretly Trading Bitcoin

Giant Asset Manager BlackRock previously stated they would add Bitcoin futures to their funds. However, the latest SEC files have revealed that the company has already made 37 futures contracts worth approximately $ 360,458 from Chicago Mercantile Exchange.

Digital Euro Will Be On the Table in the Upcoming Months

In an interview with Bloomberg, European Central Bank President Christine Lagarde has stated that the decision on a digital euro will be made by the middle of this year. Lagarde has also added that it may take another 4 years for the digital euro to be released.

A new report released by PWC reveals that crypto merger and acquisition deals broke records in 2020. In 2020, there was a $ 1.1 billion M&A between companies working on cryptocurrency and blockchain technologies. According to the research, the crypto market and technology have begun to be approved by major investors around the world.

While the size of the cryptocurrency market reached a size of $1.9 trillion, the dominance of Bitcoin fell to 58.5%. In Bitcoin, which is horizontal at $58,900 this morning compared to yesterday, it seems that the exit from the wallet and miner pools has stopped. Therefore, the appearance looks healthier than yesterday. BlackRock and Goldman Sachs news had a positive impact on the market yesterday. In addition, we mentioned that in order for Bitcoin to break a record, its volatility must decline. 30-day volatility fell back to 60% again. The greed index also supports the demand.

When the BTC/USD parity is technically analyzed, movements continue with the bullish channel. In addition, while 7-day DEMA is preparing to cut the 30-day DEMA in the buying direction, its consolidated place is again $58,400, which is the previous record level. Therefore, while $58,400 is the main support level we are following, if the resistances of $59,700 and $61,800 are crossed, the trend can be expected to be followed by new records up to the 63,000 zone. The outlook is positive, the course is in an upward trend. 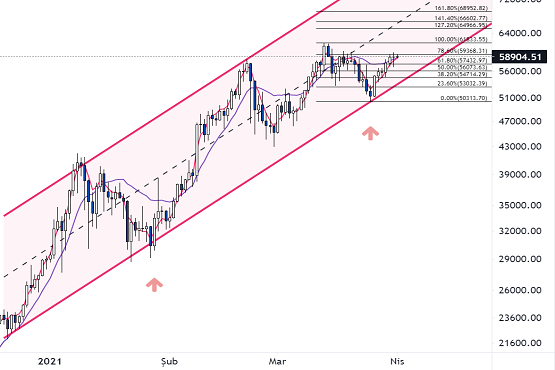 We have stated that the worst scenario in Ethereum has been priced for a while and broke off the BTC scissors due to the April 1 protests and high transaction fees. Ethereum rose with its price correction and rose again to the $1,900 levels. Although there is a horizontal change this morning, it has moved close to 9% since yesterday. Although we haven't seen any news about the EIP 1559 protest yet, once the EIP 1559 improvement is implemented, transaction fees will go to ETH burning and it will become a more secure platform. For this reason, ETH prices have remained discounted as the market, pricing the bad, has not yet been able to focus on the positive side of the EIP improvement. Therefore, we do not think the new record and moves above $2000 are unlikely for ETH.

When the ETH/USD parity is technically analyzed, the downtrend that has existed since the record of $2,040 was broken. Thus, it has completed the $1,880 TOBO target, which we pointed out both from the pressure of the descending trend and at the level of $1,550. Today's major level will be the previous high of $1,940. New record levels can be tested with purchases that can be accelerated by breaking. 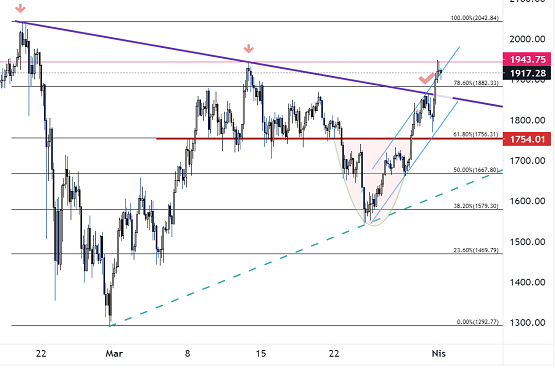 With the AVAX Apricot update, transaction fees in C-Chain have been reduced by 50 percent. In addition to this, with the introduction of AVAXTARS NFT-based game, launched yesterday by its founder Emin Gün Sirer, we saw that Avalanche took action for NFTs, the popular subject of the industry. AVAX, which is quite horizontal at $28.60 this morning, has not been able to move yet. AVAX, the Proof of Stake coin, also tracks the ERC20 network transaction fees. Thus, AVAX can become popular in the face of increasing Ethereum fees.

When the AVAX/USD parity is technically analyzed, we observe the minor decreasing trend that has been continuing for about two weeks, in addition to the recovered bottoms and the almost horizontal upward trend that has occurred since the beginning of March. While the pressure of the downward trend continues, AVAX's $28.00 level is followed as Fibo'23.6 support. 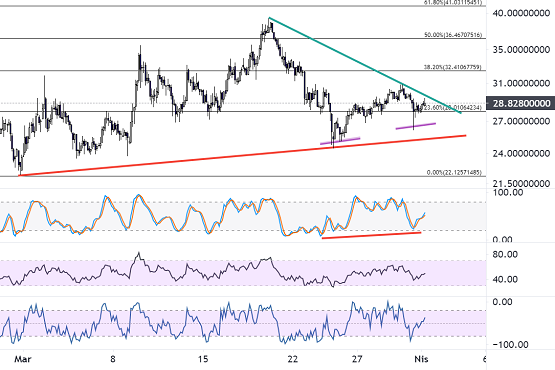 Contrary to the general market trend, XRP is seeing slight sideways and resistance from the $0.57 zone this morning. For XRP that has yet to break the congestion area, oscillators approaching the overbought zone can be misleading. In XRP, which shrinks its field in withdrawals, it is in the position to say the range of 0.52-0.53 dollars. As we stated yesterday during the litigation process in XRP, the judge gave the green light to the lawyer acting on behalf of the XRP community and asked for investor requests to be submitted until April 19. The court will deliver its official reply on May 17 and it will be determined what action will be taken on behalf of investors. For now, we can't see any reflection of these news that will pull XRP down on the Ripple side. Therefore, we expect the congestion area to deteriorate upward and if XRP escapes from the $0.57 zone, it will react towards the $0.64-0.65 range. 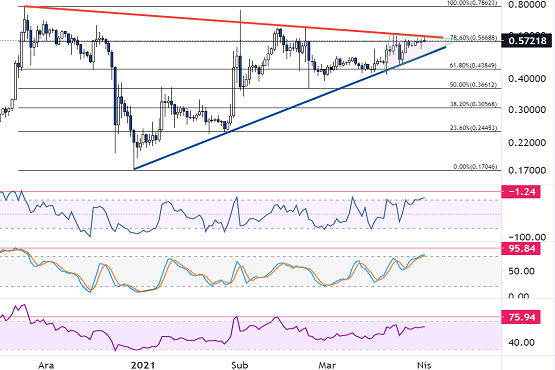 Litecoin is trading in the $190-200 range this morning. As we mentioned yesterday, the prices, which are consolidated at the level of $180, draw an 8% band in the $200 band. Despite this rise yesterday, LTC points to a 12% discount, according to BTC-LTC scissors. In Litecoin, which has seen an increase in the number of new addresses, the consolidation continues in the technical charts.

When the LTC/USD is technically analyzed, the two-month downward trend that has existed since the $250 level continues. In the 4-hour period, the mid-level of the Bollinger bands worked as a support at the point where the minor trend passed. At the same time, the direction of the Bollingers is also facing upwards. In this sense, if the price image that finds support from the $192 zone can break the declining trend past the $208 level, the rises can be traced to $225, which corresponds to the Fibo'78.6 slice. 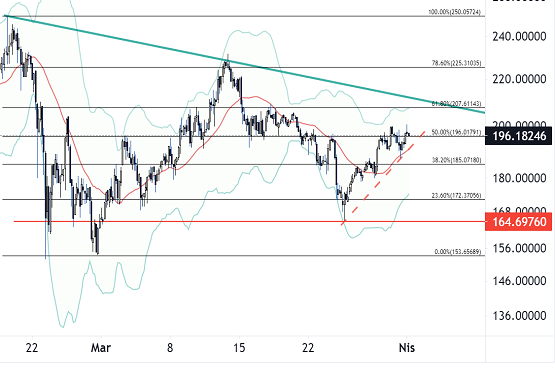 Chainlink is trading with a value gain of close to 2% at $29.90 this morning. LINK remained highly discounted compared to oracle coins. With a market value of $13 billion, LINK, which is 18% per week, is traded 30% behind the industry average in altcoin season movements. This creates a lot of potential for LINK. There were LINK purchases in Grayscale funds yesterday. In this case, we can say that corporate buyers are also interested in LINK.

When the LINK/USD parity is technically analyzed, the parity continues its accelerated rise on the minor uptrend that it started on March 24. In fact, the declining trend that existed since February 19 was broken. For this reason, the acceleration may increase in the continuation of the rising. If the resistance band in the range of $30.00-31.50 is broken, the rising can continue to complete the remaining discount. For this reason, we continue to like LINK and add it to our close watch list. 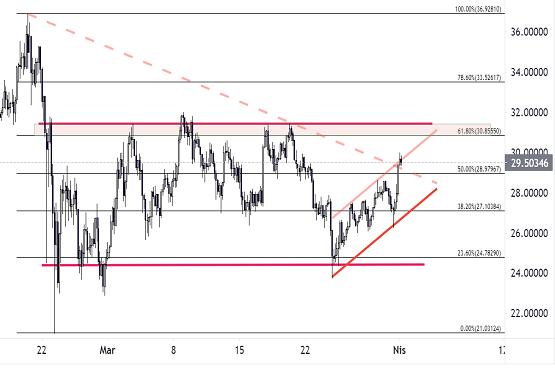 Basic Attention Token is trading with close to 2% buyers this morning after yesterday's withdrawal. Although squeezed movements have occurred in the last few days, the range of $1.10-1.20 was the consolidation and rest zone for BAT, which came to the fore in the yields in March. During this period, where the main support at $0.96 passed and the $1.10-1.20 zone was the support, BAT prices are trading at a discount close to the support. The look is horizontal and positive. 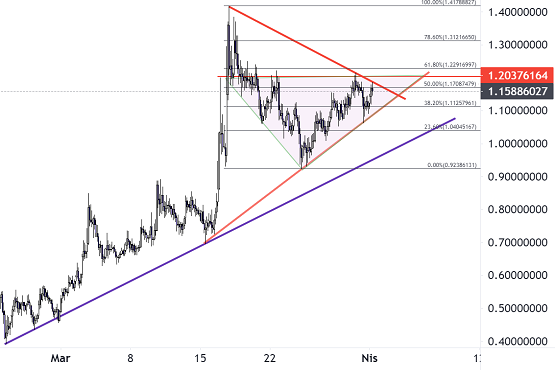