With 320 million users, Spotify is looking for a Deputy Director to join the Payments Strategy & Innovation team. The new candidate will ensure greater consideration of new opportunities and innovations in the emerging ecosystem of distributed ledger technology, blockchains, cryptocurrencies, fixed coins, Central Bank Digital Currencies (CBDCs) and other digital assets.

At least 65% of people who use the Paypal app to trade bitcoin are ready to use the best cryptocurrency to pay for goods and services at 28 million stores supported by the worldwide payment company.

USA Introduces Bill Requiring Banking Agreement for StableCoin Transactions
The US Senate submitted a new bill to Congress to secure federal control over the stablecoin industry and to secure bank contracts. Circle CEO and co-founder Jeremy Allaire said that if the law passed, it would constitute a huge step backwards for digital currency innovation in the US and limit the accelerating progress of both the blockchain and fintech industry.

Morgan Stanley Predicts Dollar Collapse To Bitcoin Rise
Morgan Stanley predicts another 10% depreciation in the dollar index in the next 12 months in 2021. It increases the chances of Bitcoin rallying above $ 20,000, he says.

Vitalik Buterin's New Roadmap in Ethereum
Vitalik Buterin has released the updated version of the Ethereum roadmap. He announced that stages 1 and 2 have been removed. The new roadmap has made the steps independent, which means developers can work on them in parallel. Although the transition to Ethereum 2.0 has begun, the transaction is expected to take at least 1 year to finish.

Bitcoin Liquidity Will Be Difficult, According to Grayscale
According to Grayscale's statement, it predicts that corporate companies have been buying Bitcoin since the first quarter of 2020, so there will be a liquidity shortage in finding Bitcoin. It shows that institutions create big positions and all Bitcoins are transferred to cold wallets, thus creating a supply shortage.

S&P and New York-based virtual currency company Lukka said in a statement that S & P's customers can work with the index provider to create customized indices and other benchmarking tools on cryptocurrencies. This move by the S&P Dow Jones Indices could help cryptocurrencies become more global investments.

CBDC Statement from Deputy Governor of the Bank of Canada

Vice President of the Bank of Canada Timothy Lane claimed that Canada's central bank digital currency, CBDC, will launch earlier than expected. In February, they aim to eliminate cash acceptance and the emergence of a digital currency.

Bitcoin is still trading above $ 19,000 this morning, despite all the correction expectations in the market. In line with the PayPal and Spotfy news, the details of which are found in the news section, 2021 Bitcoin will be used in daily life and will be full of news that when its prevalence increases, less trouble will come to the agenda. The issue of scarcity is the most fundamental story of Bitcoins that the last 1 and the amount of BTC that was active in the previous period fell to the lowest level in 5 months. In BTC, it is seen that investors do not take and hide and transfer beyond taking action according to short-term price movements. This also supports the scarcity thesis. We may encounter new purchases of both individual and institutional investors for fear of missing the opportunity we call FOMO.

Technically, when we consider BTC / USD; In the short term, the bullish curve that has been formed since November 27 is past $ 19,100. This level also becomes the Fibo '76% retracement zone, making $ 19,100 a slightly stronger support. Although it is a level that needs attention in the short term, if we hold on to it, we can maintain the trading band of $ 19,100-19,900. 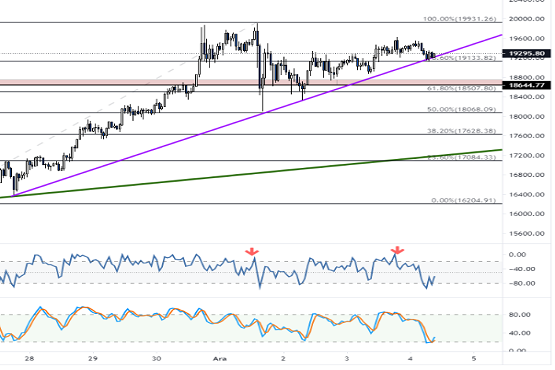 Ethereum is trading horizontally above $ 600 this morning. After the Stage 0 transition on December 1, it has a horizontal and unstable appearance in line with both its own basic movements and the general movements of the crypto money market. As of December 1, 2020, the number of Ethereum addresses has reached the highest level in 2 years. The fact that Ethereum will also switch to the PoS system with the 2.0 update has also increased the interest and confidence in this new consensus mechanism.

Technically speaking, ETH / USD has been consolidating in the $ 580-620 region recently. In ETH, which has been in an upward trend since the beginning of November, a technical amount indicates price fatigue, while if the $ 580 level breaks down, we can see double peak sales up to $ 520. Therefore, breaks should be followed. Although the withdrawals are seen as positive in terms of price health, the horizontal trading strategy is continued for now. The vision is horizontal and positive. 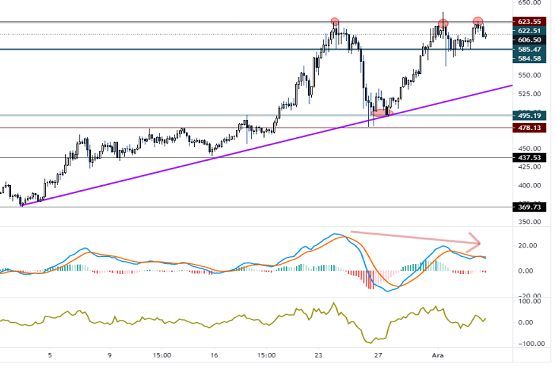 A six-month liquidity mining campaign for AVAX will begin on December 8, 2020 on Hummingbot. Passive income can be obtained with liquidity mining, and thus the Yield Farming system was created. An investor who provides liquidity to one of the offered trading pairs will be able to earn commission income through it. It is a good step for AVAX to become widespread as it carries risks. Using the Proof of Stake model long before Ethereum 2.0, the platform's project gives the green light going forward.

When we consider AVAX / USD technically; The first of the two upward trends we have drawn since November 4 contains the main picture and the other contains the sag levels. For this reason, our main support of 3.60 and $ 3.40 can be called the comfort zone as the region where sagging is observed. There is a minor upward trend in this region that has been formed for the past month with the arrival of buy reactions. The view is horizontal but in the direction of the uptrend. While the short term AVAX / USD, which forms a descending line above, struggled to pass 3.88, there was a congestion area between the 3.60 zone coming from below. With the improved outlook, we evaluate AVAX / USD positively in the short term. 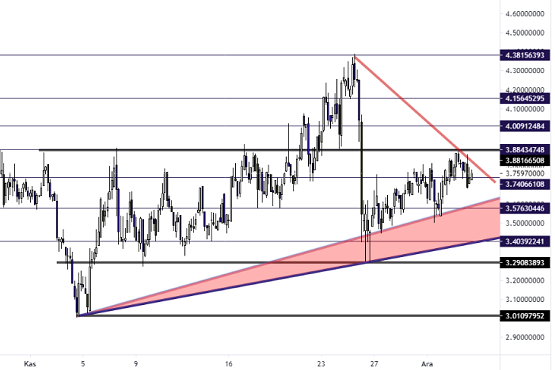 Ripple has retreated to around $ 0.6160 yesterday, reacting under the lead of Bitcoin as it hovered around $ 0.6350. Ripple CEO Brad Garlinghouse said in a conversation with CNN that the company has experienced significant growth this year despite the COVID-19 outbreak. According to CNN's statements, BTC has risen 162%, XRP 186% and ETH 304% in the past year. He thinks that countries such as the UK, Japan and Singapore will have the legal clarity and certainty that Ripple CEO predicts for the next two years. He hinted that Ripple is likely to hit public markets within two years. It offers a positive indication of the longer term movements of Ripple's value.

When we consider XRP / USD technically, it continues to move around $ 0.62, reacting Downwards compared to yesterday's trading on the four-hour charts. It retreated below the rising trend due to the impact of the morning pullback. In our analysis we mentioned yesterday, the OBO view in a four-hour period signals the return from the uptrend. The Fibo'50 retracement zone that coincides with the bullish (green) trend coincides with the 0.60 level, and if it breaks, the OBO starts may indicate a trend reversal. It will continue its positive course as it is traded above the rising trend. While the outlook is for recovery appetite for now, movements are weak. The $ 0.6475 and $ 0.6650 resistances could be considered, with the buying trading higher. 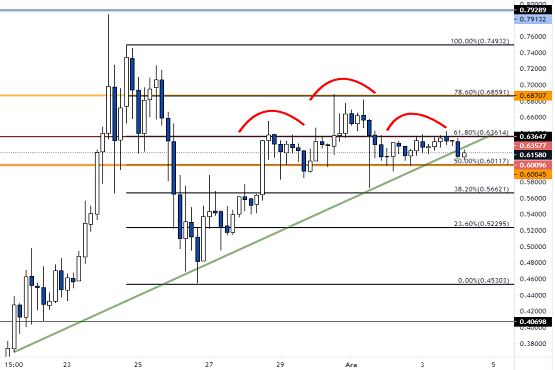 Litecoin is moving around $ 88.5 this morning, down 1% from yesterday's transactions. According to Glassnode data; The Realized Price Ratio reached its high of $ 69.44 in the last six months. It seems that the short-term market sentiment has disappeared. Litecoin has decreased by an average of 4% in transfer fees in the past week, and has experienced the biggest drop in the past three months. Accordingly, a withdrawal was observed in the amount of Litecoin transferred between wallets and exchanges.

Since the beginning of the week, LTC / USD has concentrated transactions between the $ 85-90 range. If LTC / USD manages to surpass the current $ 90 within the day, $ 95 could be considered. Although the $ 90 could not be broken, the potential of $ 103 continues in the target zone in LTC / USD, where the double bottom formation continues. 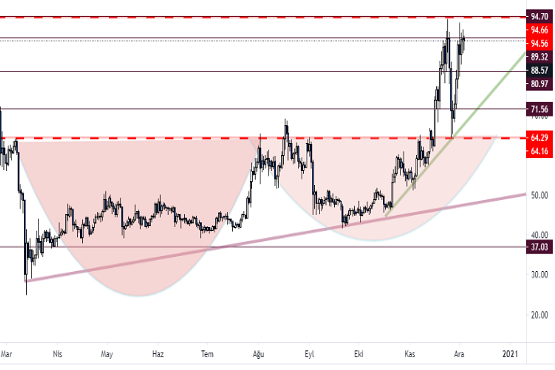 LINK reacted around 2% this morning based on yesterday's trades, traded near $ 14. According to Glassnode data; Chainlink's percentage of supply on smart contracts reached an all-time high. Updates are also expected in smart contracts, especially with the start of the Ethereum 2.0 update. In this way, agreements with corporate companies will be opened.

Technically, LINK continues its movements in the decreasing trend since the end of November, and continues its transactions between $ 12.90-14.05. If the retracement continues, levels of $ 13.40-12.90 can be considered. If it trades above $ 14.05 in case of continuation of its rise, the resistance of $ 14.80 comes to the fore. 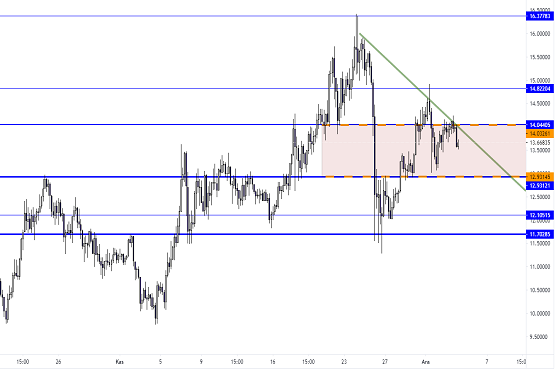 BAT / USD is trading near $ 0.2450 on the horizontal axis. Although there were retractions in the crypto money markets with the profit realizations seen after the rises at the beginning of the week, BAT / USD, holding on to its support, started to recover again. In the short term, two reverse trends were formed, accompanied by recovering bottoms and descending peaks. In BAT / USD advancing within the congestion area, the horizontal trend coincides with the Fibo ‘38 range between 0.2390 and 0.2480, which corresponds to the 2 to ‘50 retracement range. While a horizontal trading strategy is being followed in this region for now, a rapid movement is expected in possible breakouts on the other side. 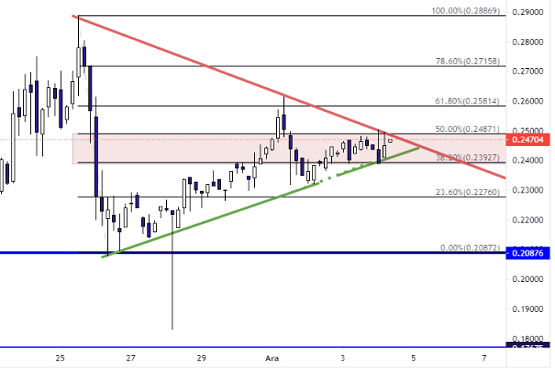