TrueUSD (TUSD) was launched to expand US dollar liquidity for applications and users in the Avalanche ecosystem. TrustToken plans to bring additional products to Avalanche built on TUSD and will play a role in DeFi applications on the platform.

It has been announced that Goldman Sachs, one of Wall Street's largest banks, will launch Bitcoin futures for its customers as of next week. It was stated that the company will begin customer transactions next week in Bitcoin futures and non-delivery forwards. Goldman was also noted to be conducting potential research for a Bitcoin ETF.

Payment giant PayPal is said to be in the process of acquiring Curv, a technology firm that allows cryptocurrencies to be stored more securely. Paypal left the questions unanswered. An Israeli news outlet stated that a sales transaction of approximately $ 300 million was made.

Application for the First ETF in the USA

CBOE Global Markets applied to the SEC to launch the exchange traded fund it prepared for Bitcoin. Although the SEC has rejected all applications for ETF to date, the company stressed that a regulated ETF would be safer for the investor and that the Bitcoin market now has a very large audience.

The US Securities Commission awaits the approval of Gary Gensler as its presidential candidate. In his statements, Gensler argued that the cryptocurrency market should be free from fraud and manipulation. Bitcoin, on the other hand, dropped three percent after these statements.

Inner Mongolia, an autonomous region in northern China, plans to cease all cryptocurrency mining activities in the region by April 2021 as part of efforts to improve energy efficiency.

While Litecoin miners have generated approximately 200,000 LTC in the last 28 days, Grayscale has purchased most of the Litecoins mined by purchasing 175,000 LTC in the last 30 days. On the other hand, the company's Litecoin trust stock contains $ 15.70 worth of cryptocurrency, while the stock is trading at $ 305 on the open market.

The world's first crypto-finance institution with physical branches has been operating in India in recent months. According to the institution's current statement, they will open a second branch in New Delhi, the capital of India.

The US House of Representatives passed the $ 1.9 trillion COVID-19 aid package bill, and the law was submitted to the senate for voting.

MoneyGram Sued for Its Negative Statements About XRP

The giant payment company MoneyGram entered into a strategic partnership with Ripple in 2019. After the lawsuit between the SEC and Ripple, he quickly ended the partnership and made negative statements that the lawsuit process was uncertain for XRP. Now, a class action has been filed against MoneyGram on the grounds that these statements are misleading for investors.

Ripple recently stated in a statement with the SEC that it was unable to deal with the previous SEC administration. Gary Gensler, known as a cryptocurrency friend, will approve his candidacy as SEC chairman as of March 2. Ripple manager Brad Garlinghouse congratulated Gary Gensler on Twitter, saying they would be pleased to work with the new SEC administration.

In a new announcement, the New York Attorney General's Office warned cryptocurrency investors and stated that investments in cryptocurrencies carry a high risk.

Bitcoin is trading at the $ 49,000 level this morning. Yesterday, the market dropped to the level of 47 thousand under the leadership of Bitcoin, when the new SEC Chairman Gensler's comments praising cryptocurrencies and technology touched on the issue of preventing smuggling between the lines. However, in general terms, Gensler's being crypto-friendly has dominated pricing and we have risen to 50 thousand behind again. In the kitchen part of pricing, some metrics in the chain data show that the price has started to mature. For example, the SOPR (Spend Output Profit Ratio), which shows the ratio between the purchased and the selling price, went below 1 for a short time. This ratio reveals that there are optimists who think that the weak links in the market will be eliminated and the price will still rise, and we have seen the ratio recovered from below 1 and the BTC price recovered from the level of 44 thousand.

When we consider BTC / USD technically, yesterday, the news-based flag image was interrupted, while now we are watching whether Bitcoin does TOBO from the bottom. While there has not yet been a clear recovery above the $ 48,800 level, which corresponds to the Fibo'38.2 zone, the momentum indicator also remains bullish. While 47 thousand and 49 thousand regions are transaction-intensive regions in the movements in the horizontal band, we have not passed below the 47 thousand level for now and we see that the outlook is positive in the direction of accumulation and recovery with the recovery signal from these regions. 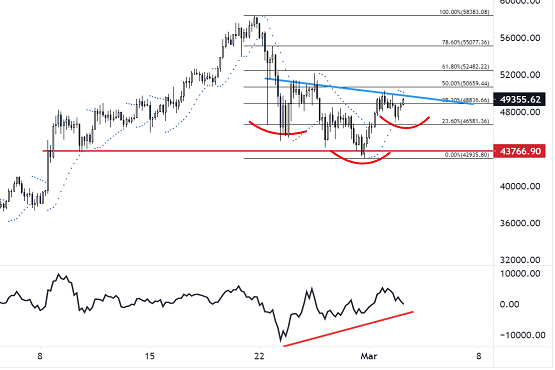 Ethereum is trading at $ 1560 this morning, with transactions 3 points above the return of Bitcoin over 4%. We have stated in our yesterday's bulletin that we expect a positive divergence in Ethereum due to the ETH-BTC scissors. Network fees, which we call Ethereum gas fees, decreased to normal levels with the decrease in volume. Thus, there is currently no situation that prevents networked Ethereum prices, but there is no new catalyst. Therefore, whether we ask whether it is an accelerated rise or regaining its loss, the answer to our second question is more pressing.

When we consider the ETH / USD parity technically, if the 1600 $ level is broken, the rises will turn into TOBO formation and the 24% ATH distance (the highest level of all time) will be closed a little so that if we get such a confirmation, that is, if it breaks 1600 dollars, it can move to the range of 1880-1900 $. . The outlook is positive and towards recovery. 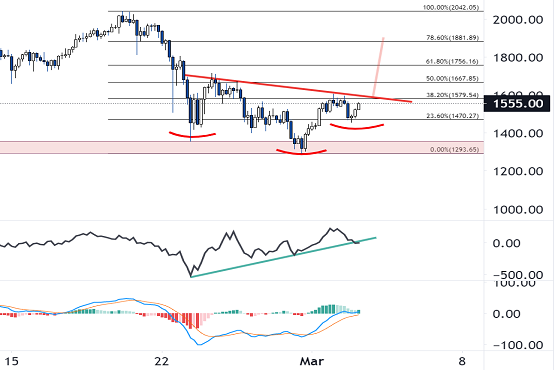 The AVAX / USD pair went up 6% this morning, pricing around $ 28.75. We have entered the last week for the 9 March lock opening, which we have included in our bulletins for a while and examined in detail to inform our investors. According to the AVAX distribution schedule; The maturity limit applied to AVAX team members, holders of AVAX as part of a three-tier public offering, stakeholders and holders of AVAX in several other put options will be lifted to a certain extent, and approximately 40 million AVAX will be available for sale. This poses a risk for AVAX, whose circulating supply is 77 million. However, looking at the first unlocking of AVAX in December 2020, it is seen that the market value increased with the increase in circulating supply, but there was no significant decrease in prices. On the other hand, AVAX's partnership with the 8th largest stablecoin, called TrueUSD, will strengthen AVAX's hand in the DeFi sector.

When we examine the AVAX / USD parity from a technical point of view, the reaction at $ 22.00 indicates that the correction that followed the AVAX record on February 10 is over. However, the horizontality between $ 22.00-31.00 continues. The upside break of the descending trend past $ 28.30 and the hold there may strengthen the upward reaction for AVAX. Following the $ 31.00 resistance, $ 36.00 is the second resistance zone. 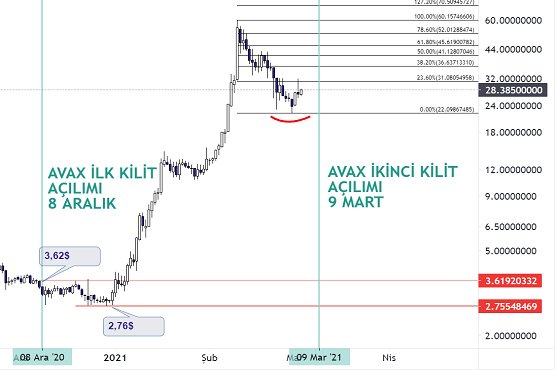 The XRP / USD pair is listed at around $ 0.44 this morning with a 1.5% price increase. 1 billion XRP sales, which are regularly made by Ripple at the beginning of each month, have restricted the XRP increase as of March due to the rising supply. Although we witnessed that the rising risk appetite in the financial markets reflected positively on the cryptocurrency community, the XRP leg remained weaker. Ripple Labs' CEO Brad Garlinghouse congratulated the new SEC Presidential Candidate Gensler on Twitter the day before, and expressed his satisfaction with this situation. Gensler, who has been working on cryptocurrencies before, stated in a statement the next day that he is not very optimistic about the developments and that there are situations that need to be regulated. In fact, after the statements of Gensler, a negative effect was seen on the BTC side.

A technical look at the XRP / USD pair shows that the $ 0.40 support zone and the $ 0.45 level in the Fibo'23.60 tranche form the upper and lower bound for the pair in the horizontal motion. On the other hand, support from the $ 0.40 zone has become a strong support zone for the pair, with prices remaining discounted for XRP, refuting the $ 0.30 target. In the horizontal region in question, it is seen that the reactions from the bottom levels form the TOBO (Reverse Shoulder Head and Shoulder) formation. The break of the neckline at the $ 0.45 level will raise the target of $ 0.52. 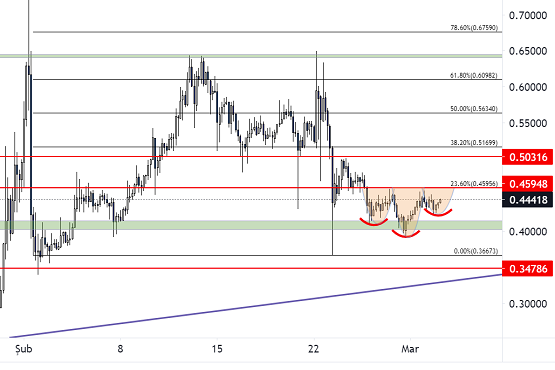 Grayscale has purchased 2500 Litecoins in the last 24 hours. Priced at $ 193 with a daily increase of 8%, LTC is counting the days for the MimbleWimble update. Extension blocks that will be applied to the Litecoin primary chain as part of the update will ensure that user transactions and identities remain confidential. On the other hand, when the Grayscale purchases in February are examined, the purchase of 175 thousand LTC stands out. Litecoin miners, on the other hand, produce an average of 200 thousand LTC in a month. This means that most of the supply that was launched within a month was taken by Grayscale.

When the LTC / USD parity is examined technically, the reaction at the $ 154 level, where the price touches the upward trend, has responded and brought along a 20% rise in the pair. The $ 154 level was also the region where oscillators were oversold, and the oscillators also confirmed this drop and bottomed out, setting the stage for the next reaction. Then, the break of the $ 180 resistance zone accelerated the uptrend. $ 205 in the Fibo'23.60 correction will be the first resistance zone for pricing. In the withdrawals, the support level of $ 180 can be considered. The outlook is positive. 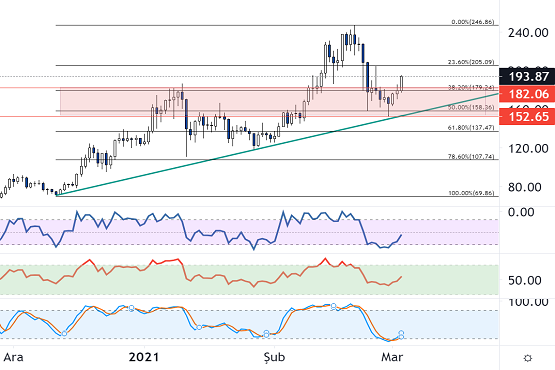 The LINK / USD pair is up 7.5% this morning, hovering around $ 30.70. In the final part of the report released by Citibank this week, it was pointed out that Chainlink is recognized among the 100 most promising technology pioneers of 2020, and the role Chainlink plays in the field of blockchain technology in the field of smart contracts was explored. In addition, the Chainlink network has started to go beyond the Ethereum network by enabling the adoption of other blockchains such as Polkadot. Compared to the high transaction fees on the ETH side, the fact that LINK is cheaper and will increase the network speed with the Off Chain Reporting update continues to increase the demand in the direction of LINK.

When the LINK / USD parity is technically examined, the parity has outpaced the involvement around the 50% slice of the Fibonacci correction with a positive movement. Thus, the double bottom pattern was approved and the pattern target points to the $ 35.50 zone. For now, pricing will use Fibo' $ 28.80 in the $ 61.80 bracket as a support or resistance. An upward break from this level may bring an accelerated rise for price candles. The rate of return in the two-day period has reached 25%. The outlook is positive. 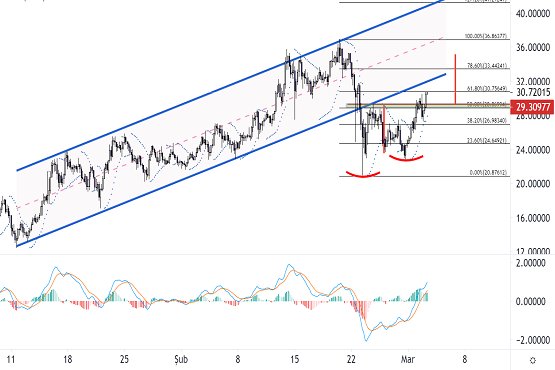 Basic Attention Token is priced at $ 0.66, up 11% this morning. When we examine the BAT / USD chart on the daily chart, it is seen that the formed flag formation confirmed by breaking the Fibo'61.80 level at 0.59 dollars. The pattern also confirmed with the increasing volume in the MACD and trading volume indicator. The formation target points slightly above the $ 1.00 zone. When the pair is examined on the 4-hour chart, it is seen that the reaction given at $ 0.38 on February 23 has created a rising triangle formation and the formation has reached its target by testing the $ 0.70 region. The first support zone for pricing is at $ 0.64. 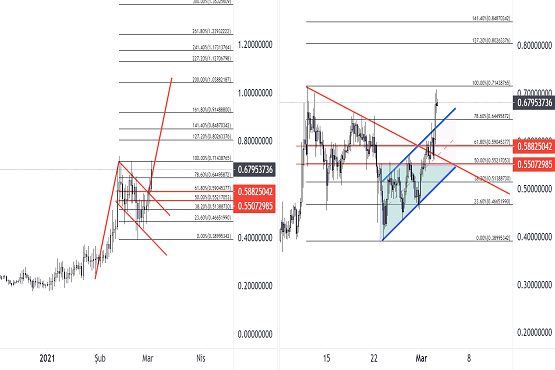