In the presentation made at the Bitcoin Mining Council meeting held on July 1, the renewable energy used by miners increased from 36.8% to 56%.

With the new law enacted in Germany, private funds will be able to allocate 20% of their portfolios to crypto assets.

In the article published by Fitch, he stated that the rapid growth of stablecoin issuance may have effects on short-term credit markets and that a crisis in stablecoins could spread to all markets.

The law will be effective from January 2022, when the President of Kazakhstan signed a new law imposing an additional tax fee for energy used by crypto miners operating in the country.

Federal Reserve Supervisory Vice President Randal Quarles stated that the potential benefits of a Fed CBDC are unclear, and conversely, a CBDC may pose significant and tangible risks.

It was stated by the US-based Soros Fund Management that it allowed its investors to actively trade Bitcoin.

Regulations are Close in South Africa

While the regulators in South Africa stated that regulations for cryptocurrencies will be the fastest, they emphasized the importance of defining crypto assets as financial products and improving the regulatory framework.

Bitcoin, which fell by 2 percent in the morning hours, is priced at $ 32,829. When we check the chain data for Bitcoin, we do not see a full recovery yet when we look at the 7-day average of the number of active and new addresses. On the other hand, when we look at the transfer between exchanges and wallets, we see that there is a net outflow dominance from the exchanges on an average of 7 days. Although this reduces the selling pressure for Bitcoin, we do not see the effect on the price yet. We see that 307 million dollars have been transferred from exchanges to wallets in the last 24 hours. The long-term outlook for Bitcoin is positive.

When we look at the BTC/USDT pair technically, we see that it opened just below the weekly DEMA ($ 33,625) and tried to rise above these levels, but failed. If the price continues its downward move, we would expect the monthly DEMA at $32,474 to act as the nearest support level. In case of an upward movement, our first resistance level will be $33,500. In the short term, due to the indecision about the direction in the market, buying near support and selling near resistance will be a healthier strategy. 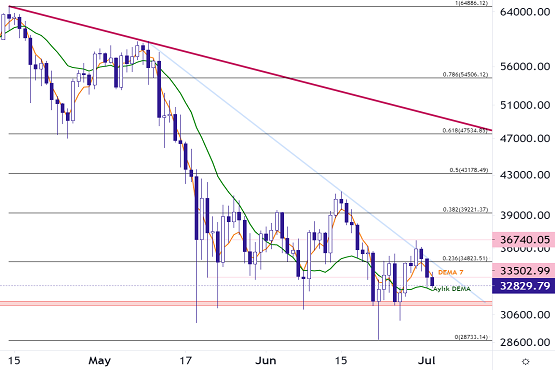 Ethereum, which lost its value by 3.43 percent in the morning hours, is priced at $ 2034. When we checked the chain data for ETH, the supply of ETH held by Ethereum investors on exchanges fell below 18 percent, the lowest level in the last 31 months. This prevents future heavy sales and positively affects the long-term Ethereum outlook. When we look at the net flow, which is the stock market, there is an ETH outflow of 384 million dollars for the last 24 hours. Investors continue to transfer ETH from exchanges to addresses for long-term HODL despite the decrease in Ethereum's price. The medium and long-term outlook is positive.

When we consider the ETH/USDT parity technically, the closest support level for ETH, which opens daily just below the 7-day DEMA level, will be the monthly DEMA ($ 2009) levels. For ETH, which does not have any negative news flow, the closest resistance level can be seen as $ 2092-2097 in a market-wide rise. Although MACD and Parabolic SAR are giving signals in the direction of buying, we anticipate that it will be more appropriate to buy near support and sell near resistance due to the mixed course in the market. 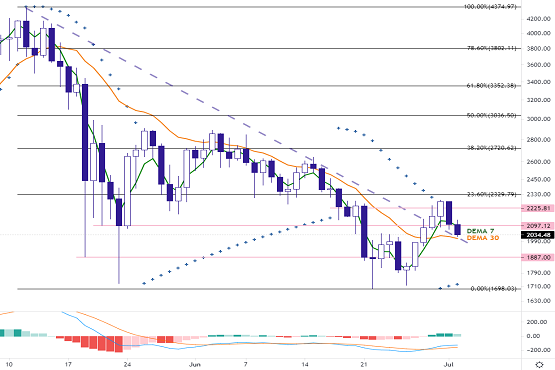 AVAX, which is down 4.43 percent in the morning, is priced just above the support level at $10.73. Continuing its movement on the descending trend with the general bearish movement in the market, AVAX, if the support at $10.67 is broken to the downside, we can expect the price to decline towards the $10.14 levels. However, if AVAX can hold above the $10.67 levels, then the $11.27-11.33 band will be the closest resistance levels. Although Parabolic SAR supports AVAX in the buying direction, it can be seen as a healthier strategy to buy near support and sell near resistance in the short term at this stage. 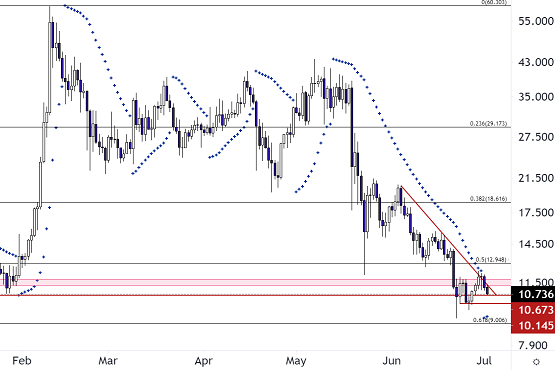 Ripple, which fell by 2.31 percent in the morning hours, is priced at $ 0.64. Yesterday, Ripple wrote a response letter to the statement made by the SEC about the ex-employee not testifying in the case. In this letter, the former SEC employee's testimony is essential as a fair defense, noting that former SEC employee Hinman spoke about Ethereum at a public event sanctioned by the SEC, and conversations he had or may have had about cryptocurrencies with third parties. In addition, it was claimed by Ripple that former SEC employee Hinman, who has direct statements about Ethereum, Bitcoin and cryptocurrencies, communicates with third parties about cryptocurrency regulations. Now, all eyes are on Judge Netburn for the decision on whether to testify the former SEC employee. If a decision is made in favor of Ripple, that is, to take Hinman's testimony, it may be possible to see positive effects in pricing on behalf of Ripple. However, as of the morning hours, there is a decrease in Ripple, as in the whole market.

When we look at the XRP/USDT pair technically, we see that it is priced at $ 0.6412, just above the support at $ 0.6388. If XRP, which is very close to the support level, fails to hold on to this support, we expect the levels of $0.62, which coincides with the two-week DEMA, to be support. On the other hand, if it closes above the 7-day DEMA ($0.654) in the 4-hour period, we expect the price to move towards the $0.70 level again. Due to the decline in the market, it will be healthier to follow the supports and resistances and to make short-term purchases and sales from their relatives. 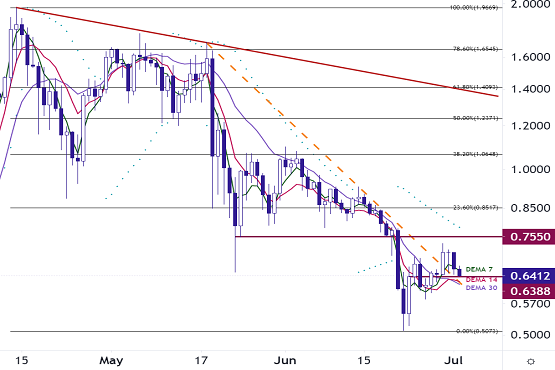 Litecoin, which fell by 4.36 percent in the morning hours, is priced at $131.27. When we examine the chain data of Litecoin, we interpret the 7-day average increase in the number of active and new addresses as positive. However, we see that Litecoin is also included in the downward price movement in the market, especially Bitcoin. The long-term outlook is positive for Litecoin, which MVRV-Z Score shows at a discount.

When we look at the LTC/USDT pair technically, the $129.15 levels can work as the closest support level for LTC, which cannot hold the weekly DEMA ($ 135.09) levels in the morning. If it fails to hold on to this support, we expect price action towards the monthly DEMA ($125) levels. However, if we start to follow an uptrend in the market, it will be very critical for LTC to be able to sustain at $135 levels. In the short term, buying near support and selling near resistance will be a more appropriate strategy. 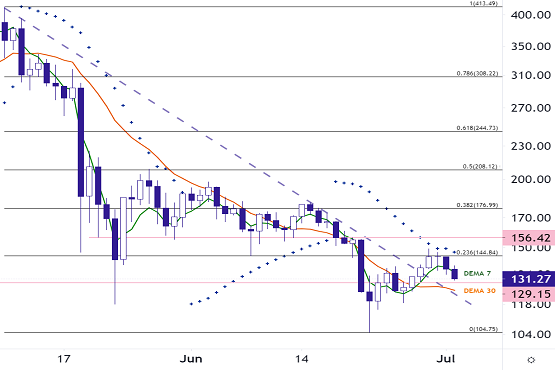 LINK, which lost 4 percent in the morning hours, is priced at $ 17.45. When we look at the LINK/USDT parity technically, it is possible to say that although it tried to break its descending trend upwards, LINK could not sustain at these levels and it was suppressed in the direction of selling, especially from the correction levels of Fibo'23.60. As the closest support level, we anticipate that the $17.00 levels, which coincide with the monthly DEMA, will work. In case of an upward price movement, it is critical that the downtrend, which coincides with the $18.12 levels, can be broken to the upside. In the short term, it will be more appropriate to buy and sell by following the support and resistance levels. 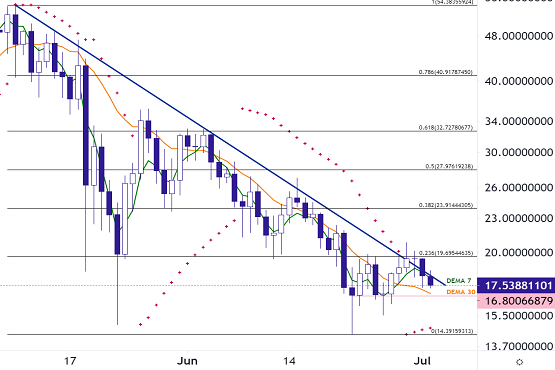 BAT, which fell by 1.87 percent in the morning hours, is priced at $ 0.551. When we analyze the chain data of BAT, there has been an increase in the number of new addresses for the last 3 days, that is, we see that the interest of investors in BAT has gradually increased, but we observe a decrease in the BAT side with the general decline in the market. When we consider the BAT/USDT parity technically, we can say that it could not overcome the resistance at $0.56 and continues its movement in the descending trend. The $0.549 levels will be the closest support levels for the continuation of the price's downward move. The Stochastic RSI is in the oversold zone and has reversed its direction, clinging above the support at 0.61. A short-term buy-sell strategy would be a healthier strategy, with $0.565 as resistance and $0.549 as support. 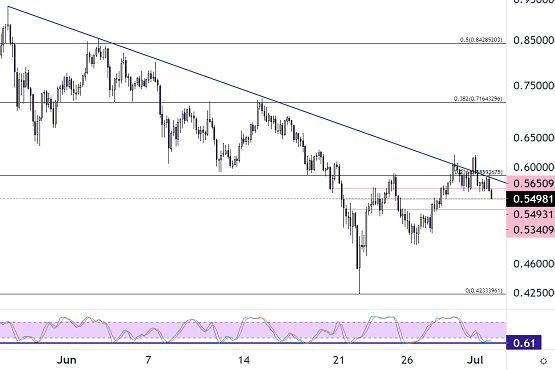