Ethereum is in the London Hardfork. The high amounts locked in Eth 2.0 Contracts also level up the entry-level fundamental funds in the market in ETH.

The value of ETH, which is likely to be ETH 2.0, has been described as 20.7 so that Ethereum's analytics platform can be designed by Etherscan. Additionally, the number of coins obtained is at a record 6.59 million.

Net exits, consisting of all digital structures, reached 26 million students. However, the combined value of management earnings (AUM) with recent gains in other cryptocurrency prices is 50 artifacts.

Tether, which has been one of the autumn news recently, is publishing a report against this autumn news. Most recently, Tether has also participated in a breakdown of its tests and teams for commercial use and not only with regard to the completion of reserve reports.

The Reserve Bank of India (RBI) Chairman said the bank should be able to model a central bank digital unit (CBDC) until this year help.

It's starting to become a full-reserve national commercial bank, according to an organization found on Founder and CEO Jeremy Allaire's website.

AMC headquarters and CEO Adam Aron is announcing that the giant is looking to accept Bitcoin payments for movie-goers by 2022 in response to customer requests.

In the morning, about 1.1 percent value Bitcoin is priced at $45,790. When we examine the latest situation for digital items in the report sent by CoinShares, we see 33 million sales going from Bitcoin in a daily period. After this situation, which can be interpreted as receiving a profit from corporate training, the investment AUM to receive training was conveyed to $50, the highest level since May.

Considering the BTC/USDT parity from a technical point of view, when August 8 was in the 200-day system, the response of the $ 44908 indicator, Fi'38.20 BTC/USDT, which corresponds to $ 42600, was considered. While in this trend, you can visit the 200-day average with a full show above the average support. Considering the MACD, which continues its arc signal in the daily period, increases towards the $50,000 levels are expected as long as the 200-day moving average is maintained. 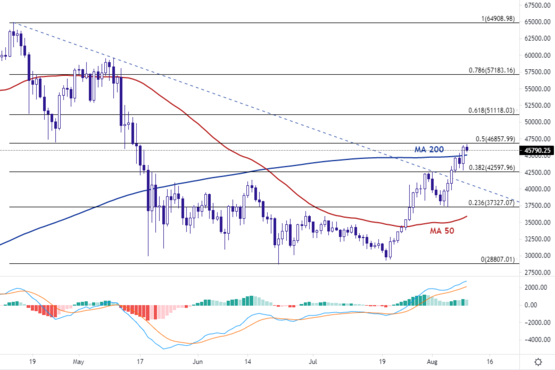 Ethereum depreciated by about 1.3 percent in the morning hours and is priced at $3119. According to data provided by Ethereum's analytics platform Etherscan, the total value of ETH staked under the ETH 2.0 deposit contract has reached $20.7 billion. Additionally, the number of coins staked rose to a new record high of 6.59 million. With the London hard fork, the ETH supply is also regulated, and the medium and long-term outlook for ETH is positive.

When we consider the ETH/USDT parity in a technical sense, ETH, which closed the day on August 8 below the level of $ 3049, which corresponds to the Fibo'61.80 slice, continued its withdrawal movement yesterday morning, but it closed the day with the support it found at the support level in the $2900-2935 band. Fibo'61.80 made it above the tranche. The band of $3300-3500, which we set as the target of the double bottom formation for ETH last month, is still valid. On sharp rises, it can be seen up to the $3573 level, which coincides with the Fibo'78.60 tranche. 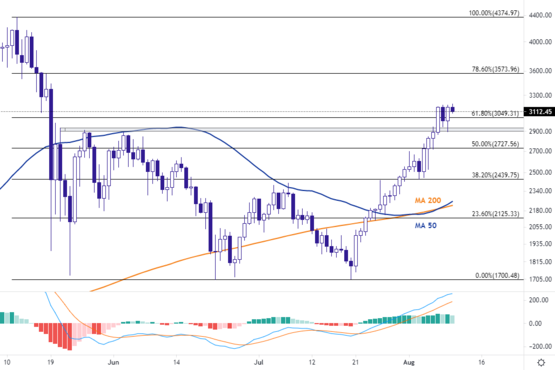 AVAX, which lost its value by approximately 0.77 percent in the morning hours, is priced at $ 16.28. When we examine the AVAX/USDT parity technically, AVAX, which continued its price movement in the rising channel that existed as of July 20, rose to the level of $ 16.5, which corresponds to the upper band of the channel, with hard and voluminous increases in the day. When we examine AVAX, which has reacted from this region, in the 4-hour period, we see that the MACD continues the buy signal. For AVAX, which seems to hold above the August 8 peak, the first support level in the pullbacks is at $15.3, which coincides with the channel middle band. 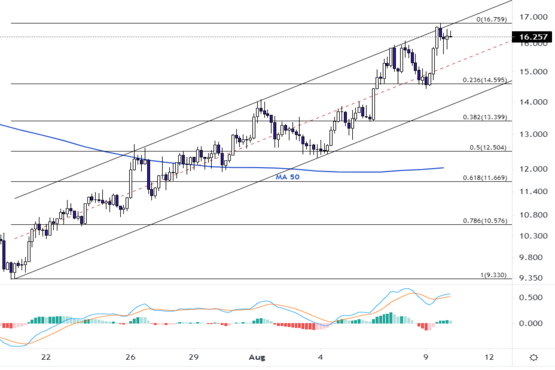 Ripple, which gained value by approximately 1.22 percent in the morning hours, is priced at $ 0.8070. While the positive news flow for the project continues for Ripple, one of the most remarkable developments is their desire to enter the NFT sector and the actions they will take in this regard. When we examine the XRP/USDT parity technically, the price movement continues within the ascending channel that existed as of July 20 in XRP, which is seen as holding on to the 200-day moving average that suppressed the price as of the end of July. When we examine XRP, which is priced between the channel middle band and its 200-day moving average, in a 4-hour period, we see that the MACD gives a sell signal. Even though the sell signal has come, the 200-day average is an important support level and as long as this level is maintained, price movements towards the upper band of the channel can be targeted. Short-term pullbacks are expected if the 200-day average is lost to the downside. 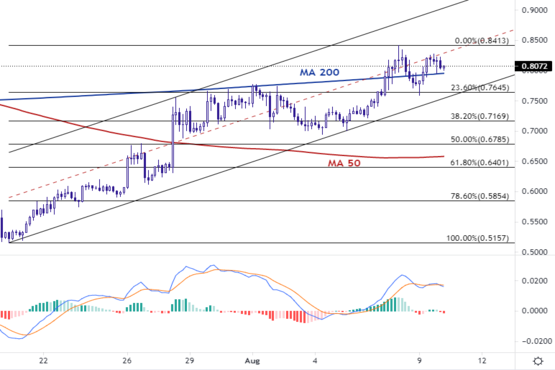 Losing value by about 2.3 percent in the morning hours, LTC is priced at $162.22. Grayscale premium, which was at +39% yesterday, has decreased to +33% according to today's data. In LTC, where we see rapid rises in price movement, the difference between spot performance and fund performance is gradually narrowing.

When we consider the LTC/USDT parity in a technical sense, as of July 23, the sharp and voluminous rises prevailing in LTC, which continued its price movement in the ascending channel as of July 23, broke the important resistance levels upwards. LTC, which broke the channel upper band upwards, rose to the level of $ 170, but could not maintain above the channel upper band and started to price in the channel again in the morning hours. If pullbacks continue throughout the day, we expect LTC to find support at $155. 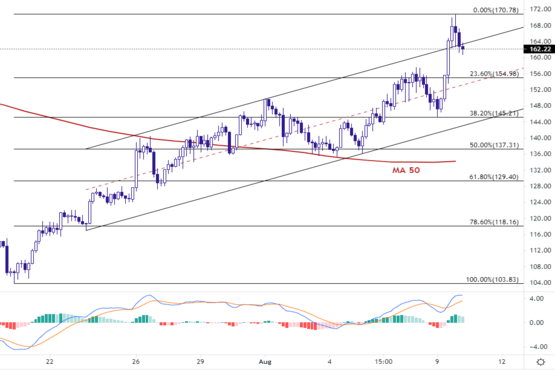 LINK, which depreciated by about 1.0 percent in the morning hours, is priced at $ 23.90. When we examine the LINK/USDT parity technically, this level is an important support level for LINK, which moved sideways as of August 3 above the $22.79 level, which corresponds to the Fibo'23.60 slice. For LINK, which we think that the upward movements will continue as long as there is no daily close below, the first target on the bullish side is $23.67. If BTC can hold above its 200-day moving average, the upside will continue for LINK. In the 4-hour period, although the MACD has not yet given a buy signal in the morning, there is a recovery. The outlook for LINK is positive. 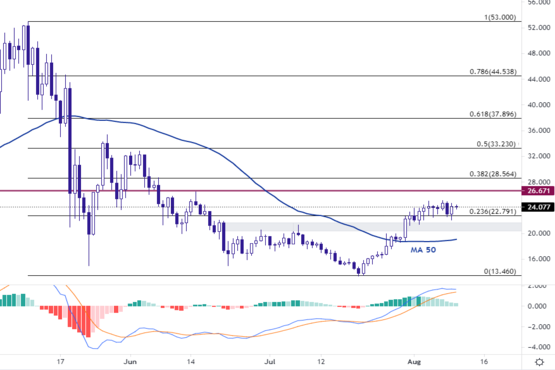 BAT, which gained about 0.3 percent in the morning hours, is priced at $ 0.703. When we consider the BAT/USDT parity in a technical sense, BAT, which has been continuing its price movement for a long time in the rising channel that existed as of July 20, BAT, which broke the lower band of this channel downwards on Sunday, continues its price movement within the channel with the rapid recovery that comes with it. When we examine it in the 4-hour period, there is a recovery in the MACD. The first target for BAT, which finds clear support at the levels close to the channel lower band, is read as $0.74, which coincides with the channel middle band and is also the August 7 peak level. 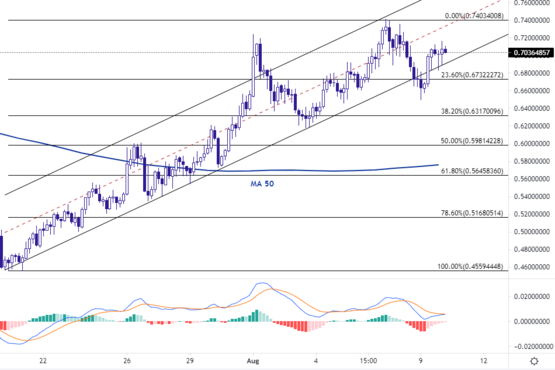