XRP, which lost significant value following the US Securities and Exchange Commission's lawsuit against Ripple, recently recruited Varadhan, who has fifteen years of experience in Amazon's software development department, to its staff. Varadhan stated in his statements that he wanted to change and develop the current financial system and technology for XRP.

Restaurant Sales with Bitcoin and Ethereum in New York


A landlord with two restaurants in New York put their restaurants on sale in exchange for Ethereum and Bitcoin payment. This will be the first restaurant sale with Crypto Money in the USA. In his statements, the restaurant owner stated that he accepted cryptocurrencies as a safe haven after the US economy and the weakening dollar.


The total market value of DeFi tokens reached $ 11.5 billion. The market value of XRP, which suffered heavy losses after the lawsuit between SEC and Ripple, fell to $ 10.26 billion and was overshadowed by the rising DeFi industry.

After the Chinese State Bank tried digital yuan in October, this time, electronic transaction trials were initiated with private ATMs installed in certain locations. Through these ATMs, customers will be able to withdraw and deposit money by converting their bank assets to digital yuan on their smartphones.

It was described as "Balloon" by the official of Bank of America due to the withdrawal it made in the last days after the rise of Bitcoin that lasted until last week. The metaphors arising from being volatile for Bitcoin, the product of a decentralized authority and costing all people, drew reactions.

2.4 Billion Dollars of Liquidity Transaction Made in a Day in Stock Exchanges

According to the data provided by Bybt, after Bitcoin fell to $ 33,000 yesterday evening, Ethereum, XRP and other coins, especially Bitcoin, were liquidated in derivative exchanges, and the liquidation volumes in many crypto money exchanges were doubled.

Scaramucci, former advisor to Trump and founder of SkyBridge Capital, announced that the depreciation in Bitcoin is as expected and should not be sold. For those who think they are late to buy bitcoin, he stated that Bitcoin is at the beginning of the road.

Bitcoin is trading in the $ 35,800 region this morning. After seeing the $ 41,700 peak, after a correction of about 28%, BTC, which worries the market, received record purchases from the lower tiers. With the purchase seen in the ranks in the 30,000 region, 15% of the loss was recovered. Likewise, there is an increase in the number of accounts with 1,000 or more BTC in their account. Despite the HSBC and FCA news, we see Bitcoin starting to price negative news and heal its wounds. However, instead of entering an upward trend again and seeing a record, we can also watch horizontal transactions for a while. Especially until the information pollution in the market has passed. The current swelling prevents the start of a new movement.

When we consider BTC / USD technically; The TOBO formation on the BTCUSD chart, signaling the bottom reversal, can start if the $ 35,850 level is broken. The high volume that occurred when it fell to the $ 30,000 zone confirmed the return. TOBO target points to $ 39,800 levels. When it reaches these levels, it may want to rest for a while instead of a new uptrend. Still, there is no negative situation for BTC in terms of technical and fundamental aspects, but attention should be paid to the news flow. 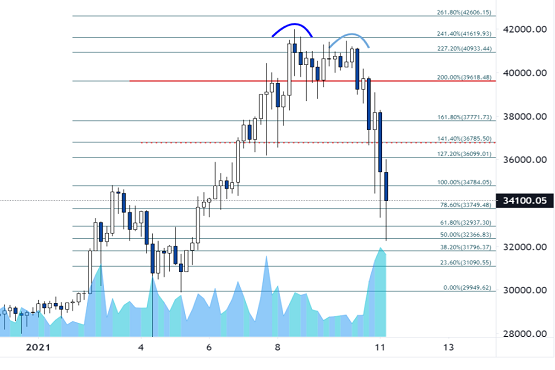 Ethereum is trading at $ 1140, up 5% this morning against the dollar. Ethereum, which still lags behind in terms of performance compared to BTC and maintains its upward potential in the ETH / BTC clipper, is slightly behind. In ETH, which has a limited increase in the number of active and new addresses, whale accounts (wallets with a balance of 1000 and above) show some ETH outflow. The fact that we still cannot see a drop in gas fees (transaction fees) is a major obstacle to the Ethereum consensus.

When we consider ETH / USD technically, there is TOBO with a similar view to BTC. However, the $ 1160 level must be broken in order for TOBO to start and approach $ 1400 again. There is a recovery in the MACD and Momentum in the four-hour period. Still, the indicators have not yet moved on to the buy-side, and since $ 1160 has not been broken and TOBO has not started, investors who do not like risk should be cautious. Technically, there was a minor descending trend. In order for this trend to be broken and TOBO to start, it must settle above the $ 1160 resistance. 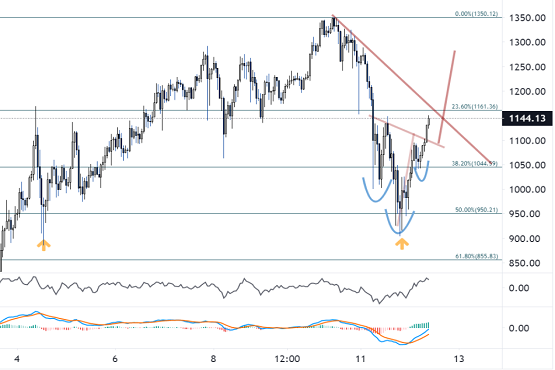 The AVAX / USD pair was one of the pairs that yielded the highest returns from Bitcoin-led recoveries. CBT rhetoric coming out of the flu, Avalanche will be a partner in terms of planned development projects in Turkey crypto currency. The expectation that the demand would increase in case of rhetoric had a positive effect on the parity. Avalanche, priced at $ 7.84 at the moment, got out of its bearish position as of Monday, January 11 (yesterday) and increased by more than 30% in 4-hour candle closing at the time of writing. The strong reactions that it continued as of 2021 and the accelerated increases in succession enabled the pair to set new records. Although the expectations in the AVAX / USD parity, which is quite positive in the technical view, have increased positively, we should say that investors should be cautious due to its volatility. 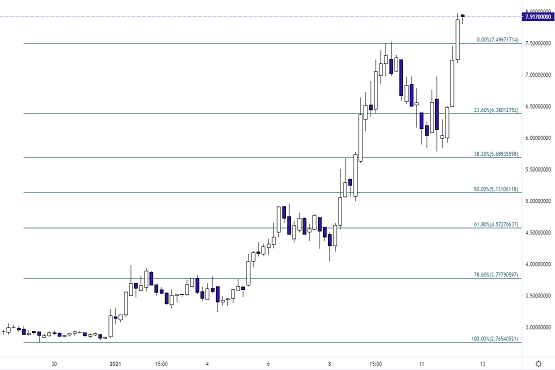 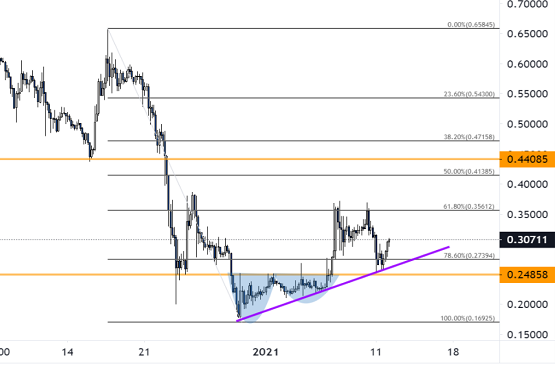 The LTC / USD pair is priced around $ 143 with an increase of 3% in the morning. Although the potential is high in macro outlook and positive returns, Litecoin has suffered a higher percentage loss compared to Bitcoin due to the hard retracements led by Bitcoin in recent days. Although the short-term pricing below the $ 143 level that we have been carefully monitoring will not include the LTC / USD pair in the downtrend position, it is important to maintain the rise within the channel boundaries by maintaining a persistence of $ 143 and above.

Prices above the $ 150 level, which is the Fibo'23.60 correction, for Litecoin, which broke the neckline with a steady increase of $ 143, which is the target of the long-term double bottom formation after the bull movement that has been going on since mid-December, and then declined to $ 120 with the general decline of the market. it will lead to more positive increases. The fact that Bitcoin, which has a high correlation, still has more positive percentage values ​​on the basis of return, can cause Litecoin to show rapid increases by closing the return gap when the worries disappear and market confidence is restored. For now, we will be following the reaction at the critical Fibo retracement levels. 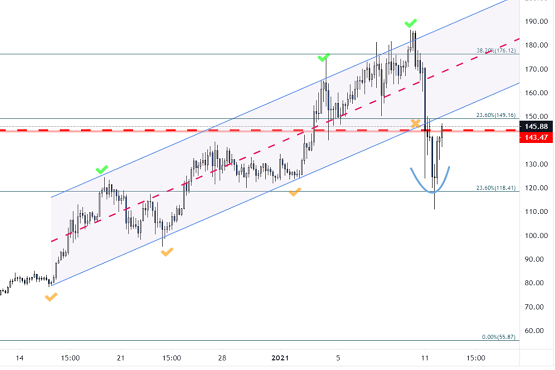 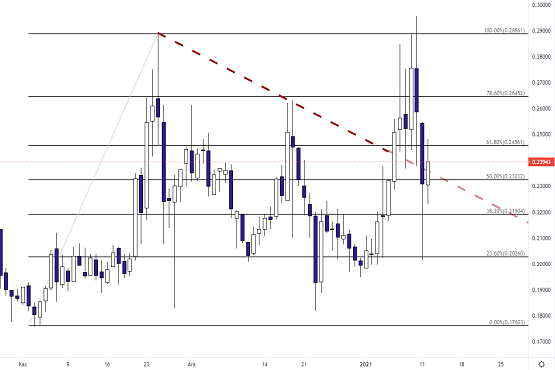