In an interview with Bloomberg HT, Minister of Industry and Technology Mustafa Varank argued that the cryptocurrency market must somehow be brought under control. Varank emphasized that it is too early to declare a measure for cryptocurrencies, however, he added, the developments in the cryptocurrency sector have been closely followed.

Ripple Investors may be Involved in the Lawsuit as Third Party
According to the recent developments in the lawsuit between SEC and Ripple, Deaton, one of the executives of a distinguished law firm, stated that Ripple investors have requested to join the case as a third party. If this request is approved by the judge, Ripple investors will be able to defend their rights as a third party.

The court dates were accepted and updated with the document submitted to the court by the lawyer of Ripple. According to the current schedule, Ripple CEO Garlinghouse and co-founder Larsen will make an opening defense to the court on April 12. The SEC will then forward its own defense on May 14. At the last stage, Ripple will be given time to submit all necessary defense documents, evidence and transcripts requested by the SEC by June 4.

In a document Tesla submitted to the US Securities and Exchange Commission (SEC), it is reported that the titles of company CEO Elon Musk and CFO Zach Kirkhorn are changed. As of March 15, Elon Musk's title has changed to "Technoking of Tesla'' and Kirkhorn's to "Master of Coin".

Bitcoin is trading at $54,000 this morning with 2% sellers. The sale of 4.9 thousand BTC in a single transaction yesterday and India's prohibiting steps on cryptocurrencies created fear in the markets. Although there was no disruptive effect in the basic sense, this single item transaction restricted the movements of BTC which was at its peak, and the market was subjected to a cumulative selling move led by the main currency. However, according to the Market Value/Realized Value ratio, Bitcoin was not at a premium even at $60,000. Therefore, we do not consider the current withdrawal as a transformation or change that could cause panic. Stable coin amounts in the stock exchanges also indicate that the market is not shrinking.

When we consider BTC/USD technically, we see a recovery over here again, even if it is slightly below the bullish channel within the withdrawal. The two minor descending channels that have been formed since the 62,000 peak are passing the level of $55,100 and $58,400 which corresponds to the Fibo'78.6 slice. We do not see a technical negative image in Bitcoin where the upward trend continues. The outlook is bullish. 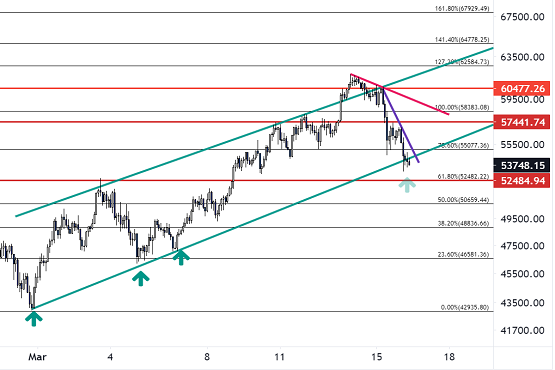 Ethereum is trading at $1,780 this morning with a flat and slight decline.  While the amount of ETH kept in the exchanges continued to decrease day by day, the amount of ETH locked above 2.0 also broke a new record. While all of these are in the direction of restricting the supply of Ethereum and increasing the price, we see that the long (buy) side on the forward side is also strong. It is seen that the yield potential of ETH varies between 13 and 15 points in weekly and monthly returns compared to BTC. Although the attack on the ERC-20 network by miners on April 1 is somewhat thought-provoking in terms of prices, we can state that we like the potential of Ethereum and put forward expectations in terms of return.

When we consider BTC/USD technically, the price outside the bullish channel at $1,750 which corresponds to the Fibo'61.8 slice, has been support and is trying to complete the reversal move.  The intersection of the two lines on their ascent will be important: the first is the $1,820 zone where the old bullish channel crosses and the second is where the minor downtrend intersects. We consider the technical return positive in that if it reaches the $1,820 level, the record level of $2,040 will become the upper band of the channel. 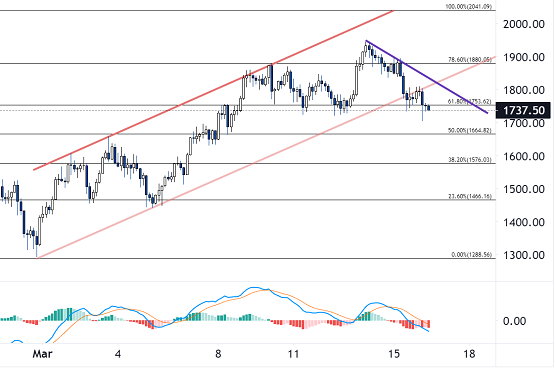 The AVAX/USD parity is pricing at the $28.50 zone this morning, with a 2% retracement. On SushiSwap, one of the most popular decentralized exchanges built on the Ethereum network, transactions have become very slow and costly due to the ETH network density. Today, Avalanche announced that SushiSwap will be supported on its platform.  This means using the AVAX token for transactions in DEX and increasing demand and liquidity on the AVAX side.

When the AVAX/USD parity is technically analyzed, it is seen that the zone between the $28.30 and $29.00 levels is the support zone and the reaction on it is weak, even though the pricing has not dropped below this level for the last week. In the 3-hour period, oscillators confirm that this level will serve as a support, with their ends turned upwards. Therefore, over the reactions, there will be resistances that we will follow at $31.15 and then $35.00 in the Fibo'23.60 slice. 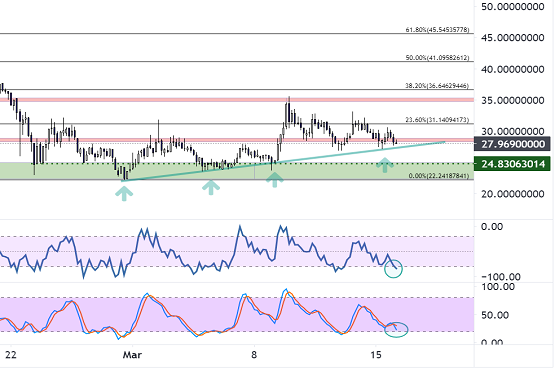 The XRP/USD parity has increased by 20% on the hourly candle, with its accelerated rise this morning in a short time. Throughout the litigation process of Ripple and SEC, one of the most important reasons for the SEC to withdraw from its decision is the investor grievance. Aside from XRP being a security, even the SEC's defense of this claim had virtually eroded the value of XRP. XRP holders were the losing followers of the litigation process. After collecting signatures and sending letters, now a bigger move has come from the investors. They are stating that they want to participate the lawsuit as a third party and defend their rights regarding their victimization. This, in fact, is an indication that a deterrent group of investors can cause enormous pressure on the SEC even if it is an official institution of the United States.

When the XRP/USD parity is technically analyzed, the horizontal movement in the upper part of the horizontal channel created as of February 23 has deteriorated with the intraday reaction. The reaction over the $0.44 level, which corresponds to the channel midband, brought about a 20% increase. The oscillators we examined in the 3-hour chart came to the overbought zone. For this reason, for the parity that cannot hold above $0.48 in pullbacks, a support of $0.44 may be on the agenda again. Closings above $0.48 can strengthen the course positively. The $0.44 zone is the major support zone for XRP, and retreats towards it could be gradual buying places. 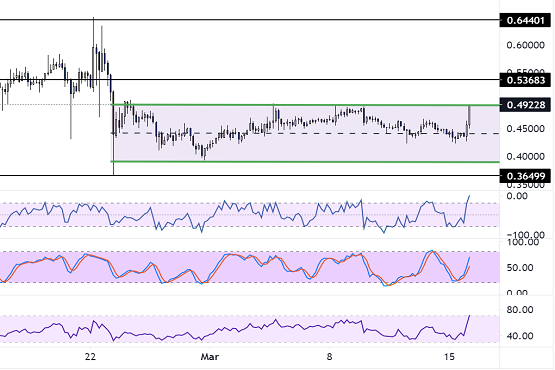 The LTC/USD parity is pricing at $203 this morning, up 1% on a daily basis. The increase in the number of active and new accounts gives a positive signal with the participation of new investors on the Litecoin side. On the other hand, Grayscale has brought 1,617 Litecoin to its investors in the last 24 hours. Litecoin, one of the coins with the highest correlation with Bitcoin, is also 18 points behind Bitcoin on the basis of monthly returns.

When the LTC/USD parity is technically analyzed, an OBO formation has occurred in the upper band of the channel. The formation was completed in the $190 zone. The $190 zone is a strong support zone for the parity. If it returns to the channel again and breaks above $205, we will have resistances of $210, $220 and then $240, respectively. 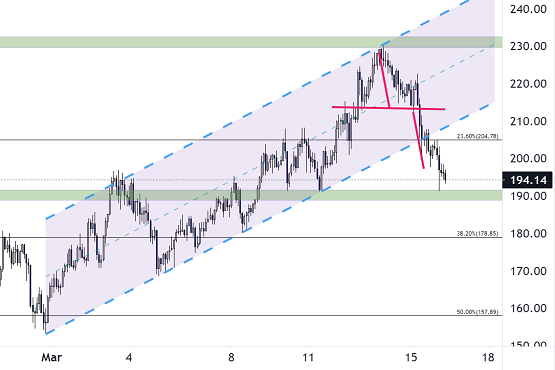 The LINK/USD parity is pricing at $28.00 zone this morning, up 1.7%. There has been a weakening in the number of active and new addresses of LINK recently. Although the increase in the amount of smart contracts on it increases its demand on the basis of developers, it shows that it remains a little more in the background for new investors. However, the increasing popularity of NFT tokens and increasing the relevant audience of DeFi platforms that Chainlink cooperates with is very positive for LINK, an oracle token in the long run. For this reason, we continue to like its project, even if it lags behind in the short term, maybe on chain data of the market.

When the LINK/USD parity is technically analyzed, the parity broke the $27.90 channel lower band, causing the sellers movement here to strengthen and the parity dropped to the $26.40 zone. Candlestick closes above the $27.00 support above the Fibo'38.20 retracement. The $27.00 support may be a possible response zone for LINK wanting to re-enter the channel boundaries. Possible positive course will bring resistance in the $29.00 and $31.00 zones. 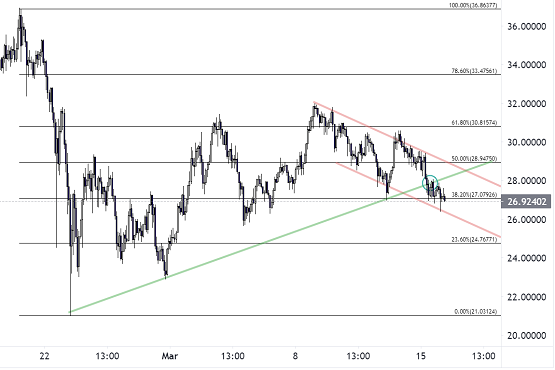 Basic Attention Token is priced at the $0.76 zone this morning, with a horizontal change on a daily basis. In the past week, the consolidation period between $0.71 and $0.84, the first slice of the Fibonacci retracement is noteworthy. The parity held strong and did not show a significant drop during the market period that was retreating under the leadership of Bitcoin. However, profit realizations may have caused a horizontal course for prices that rise rapidly within the scope of both fundamental and technical analysis. On chain data, on the other hand, shows a slight decrease in the number of active and new addresses.  Nevertheless, the fact that the Brave browser it is integrated with is increasing the number of users will support BAT's popularity. Pricing at $0.84 and above could lead to $0.91 and then $1.00 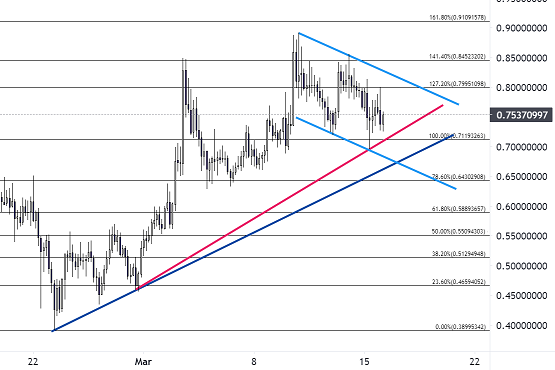