Swiss Company Says It Will Accept Payments with Cryptocurrency

Switzerland's leading digital mediation platform vrmandat.com; Bitcoin began offering payment options with Ethereum and Nimiq cryptocurrencies. Payments can be made directly from the customer's wallet to the platform's wallet without any intermediaries.

This week, Chinese e-commerce giant Alibaba launched its first NFT market platform with the approval of the Sichuan government.

Kim Lew, President and CEO of Columbia Investment Management Company (IMC), said cryptocurrency is more than a whim and the industry is "absolutely permanent."

Billionaire Peter Thiel's publicly traded Palantir Technologies company has said it is preparing for the "Black Swan Event" by inviting customers to pay in Bitcoin. The American company announced that it will consider Bitcoin as a form of payment and protection against uncertainty before adding precious metals.

Avalanche is trying to lure DeFi developers with a new liquidity mining incentive plan. For the first phase of the program, $30 million was allocated at AVAX in three protocols.

Dutch football club PSV Eindhoven said it had agreed to pay in Bitcoin in a new sponsorship deal.

Bitcoin, which lost about 1.5 percent in the morning, is priced at $44,012. Yesterday, two companies announced that they would accept payments with BTC in Bitcoin, which has a high positive news flow. At the same time, Dutch football club PSV Eindhoven announced that it had agreed to pay in Bitcoin in a new sponsorship deal. As bitcoin's accepted sectors and countries continue to increase, we can see that adaptation is increasing from the on-chain data. The long-term outlook for Bitcoin is getting stronger.

When we consider BTC/USDT parity in technical terms, it has risen above the 200-day moving average of $45,544 with the positive news flow mentioned above yesterday, but in the evening it has again resisted from this level and has also deleted its intraday gains to $44,700. When we look at the daily period, it appears that it has lost its upward momentum and that there is a sell signal from MACD. If BTC remains below its 200-day moving average, withdrawals in altcoins and BTC may continue in the short term. Our next support level is Fibo'38.20 tranche of $42,598. 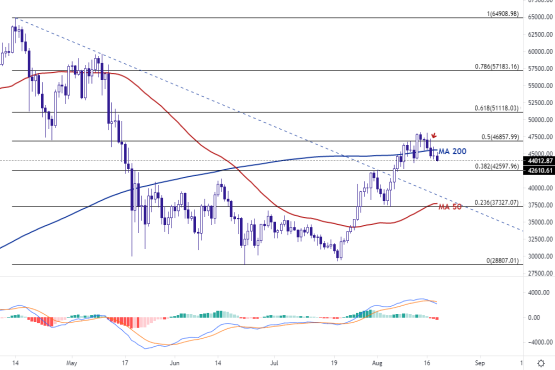 Ethereum, which lost about 1.15 percent in the morning, is priced at $2973. According to a post by CryptoQuant yesterday, the ETH 2.0 contract was staked at 95,392 ETH (about $287 million). In the last case, 5.84% of the total ETH supply is locked into the ETH 2.0 contract. At the same time, when we examine chain data in the daily period, there is a constant ETH output from exchanges to wallets. While supply is reduced by withdrawing from the exchanges to wallets by investors, and with the regulation that comes with EIP-1559, we think that these reductions in supply will also push up the price of ETH in the medium and long term.

When we consider the ETH/USDT parity in a technical sense, it continues to sell macd as of August 17th in the daily period. ETH, which could not break the resistance zone in the $3300-3375 band despite several attempts, fell below Fibo'23.60 tranche of $2947 with net resistance from this level. As long as BTC remains below its 200-day moving average, we think the pullbacks will continue at ETH. The $2895-$2935 band is our key support area. Daily closures below this band may lead to withdrawals up to the next support level of $2710. 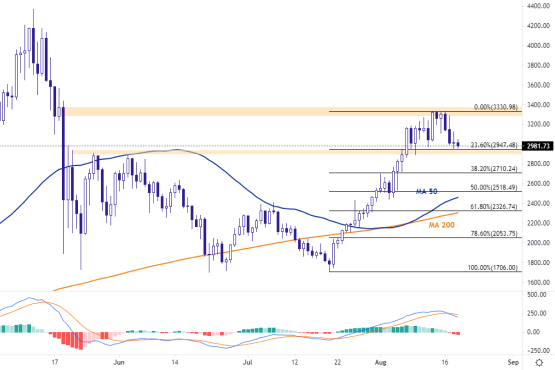 AVAX, which gained about 1.2 percent in the morning, is priced at $30.86. According to yesterday's news feed, Avalanche is trying to lure DeFi developers with a new liquidity mining incentive plan. For the first phase of the program, $30 million was allocated at AVAX in three protocols. Avalanche, which has come a long way in terms of project development recently, continues to maintain its positive medium and long-term outlook.

When we examine the AVAX/USDT pair technically, it still maintains its MACD positive outlook over the daily period on AVAX, which is priced above its current rising trend as of July 20. As we noted in the bulletin yesterday, it was important for AVAX to hold on to its 200-day average for the short-term continuity of rises. AVAX, which was priced below its 200-day average yesterday morning but again rose above this level of $23.25 by erasing all intraday losses, rose to $31.50, which corresponds to our next target price of Fibo'78.60 with the positive news flow. Our most important support level for the correction movement that may occur in AVAX if market-wide withdrawals continue is the 200-day moving average of $23.35. 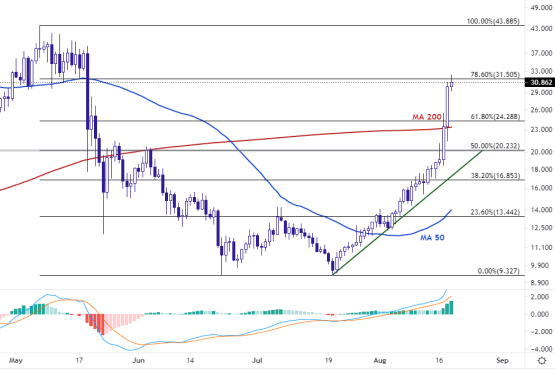 Ripple, which gained about 1.21 percent in the morning, is priced at $1.1285. When we consider the XRP/USDT parity in a technical sense, XRP, which loses its momentum on the upward side, has peak formation in macd in the daily period. XRP, which is up about 23 percent from its August 18 peak of $1.35, is seen as having support from Fibo'38.20 at $1,065. This level, which also coincides with the price mounds in late May and early June, is seen as an important level of support. We think the correction movement could deepen towards the $1-$0.98 band if it breaks downwards.

LTC, which lost about 0.45 percent in the morning, is priced at $166.16. When we consider the LTC/USDT parity technically, LTC, which broke its existing rising trend as of July 20th from $170 yesterday due to the negative discrepancies we followed in the 4-hour period, is seen as having found support from the level of $164.10, which corresponds to Fibo'23.60. The sell signal continues below 0 on macd, but momentum for the short-term decline has been lost. If the $164 support level breaks down and persistence is achieved, $150 is read as the next level of support. If LTC, located in the area close to support, experiences a recovery, the next target is the short-term resistance zone, which is at $175. 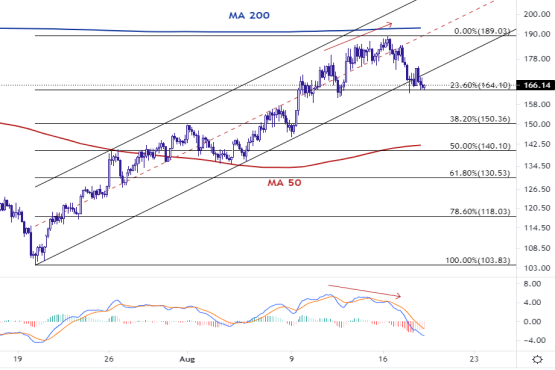 LINK, which lost about 1.10 percent in the morning, is priced at $25,056. When we examined the LINK/USDT parity in a technically 4-hour period, LINK continued to move prices above the rising trend that existed as of July 20, broke this trend yesterday at $23.2 and refused from below. LINK, which continues its retreat with the resistance it sees as a result of this rejection, is located in the stochastic oversold zone in a 4-hour period, but it retains the sell signal. Depending on the pricing in BTC, the next support level for LINK is the Fibo'50 tranche, which is at $21.96, in withdrawals that we expect to continue throughout the market. 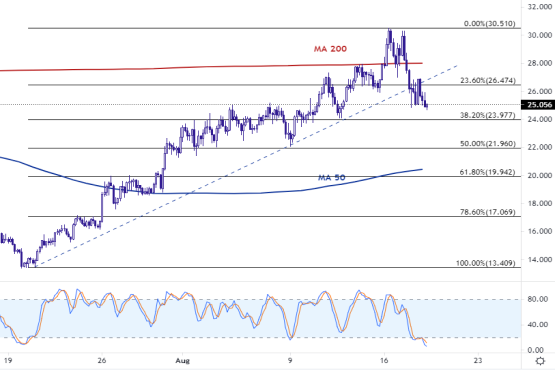 BAT, which lost about 1.52 percent in the morning, is priced at $0.7081. BAT, which yesterday rejected the rising trend that existed as of July 20, which it broke downward on August 17th when we consider BAT/USDT parity in technical terms, closed daily below the level of 0.7264 dollars, which corresponds to Fibo'23.60 with the resistance it has seen. Today, with the daily candle opening, the Fibo'23.60 slice is tested again, but it continues to signal the sell MACD in the daily period for BAT, which has not been able to maintain persistence on it. The key levels we expect to find support if the pullbacks continue in BAT are $0.6626 and $0.6153, respectively. 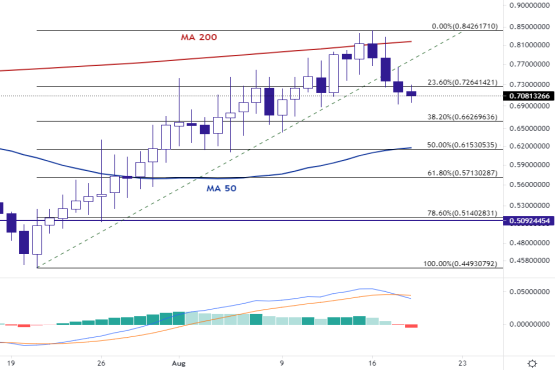