A Swiss based digital asset management and custody company was granted a securities house license by the Swiss Financial Market Supervisory Authority. In this way, confidence was provided to customers in terms of risk and liquidity in crypto currencies, where institutional adoption increased, and the company stated in a statement that possible problems will disappear and investments will grow thanks to the license.

Investment giant Guggenheim applied to the US Securities and Exchange Commission (SEC) for Bitcoin transactions in November to invest in the Grayscale Bitcoin Trust fund. It was announced by the SEC that these transactions could only begin as of February 1. The assets under the Guggenheim's management are worth more than $ 246 billion, and the company can now trade up to $ 500 million in BTC.

Bridgewater researchers, the world's largest hedge fund, discussed three challenges in Bitcoin in their newsletter. Bitcoin is still very volatile, regulation uncertainties and liquidity levels. When Bitcoin overcomes these difficulties, expectations were announced that institutional demand will increase. Bridgewater CEO expressed his admiration for Bitcoin in a statement.

Negotiates with Ripple to Turkey and Kuwait Cooperation

According to a statement issued by a bank based in Kuwait, Kuwait Finance House and charge customers between Kuwait and Turkey 7/24 ripplenet the network to be used for a platform that can transfer money. In the continuation of the statements, it was stated that they want to benefit from Blockchain technology and increase its benefits in order to adapt to the financial sector.

Elon Musk, one of the richest men in the world, made a statement in the program he attended this morning as "I am a Bitcoin supporter, Bitcoin is about to be accepted in the traditional finance community." Emphasizing that he should have bought Bitcoin eight years ago, Musk stated that although he was late, those who believed in Bitcoin were also included.

Another Delist News for XRP

One of the world's largest leveraged cryptocurrency exchanges based in East Africa reported that as of February 15, XRP transactions will no longer be made on the platform. According to the announcement, the exchange will remove the XRP / USD and XRP / BTC trading pairs from its platform on February 15th.

Bitcoin is trading slightly flat this morning around $ 34,000. After Elon Musk became a Bitcoin phenomenon, he said in a social media interview yesterday that he liked Bitcoin very much and that it will be quickly adopted by everyone and will be a portfolio investment tool. Guggenheim Investment Advisory firm announced that it will invest $ 500 million in BTC after SEC approval. However, in chain data, while BTC's reserves in stock exchanges continue to decrease, there is an increase in stable coins carried to stock exchanges. This is a harbinger of the increasing interest in cryptocurrencies.

When we consider BTC / USD technically; There is a triangle squeeze, accompanied by the descending trend. The 30-day moving average also crosses the $ 35,000 level. For now, although there is a horizontal motion in the levels spread to the $ 32,200-34,000 region, we think that the trend in BTC is upward and if the $ 35,000 region where the average and descending trend is broken, there may be a rapid rise. The view is horizontal but positive. 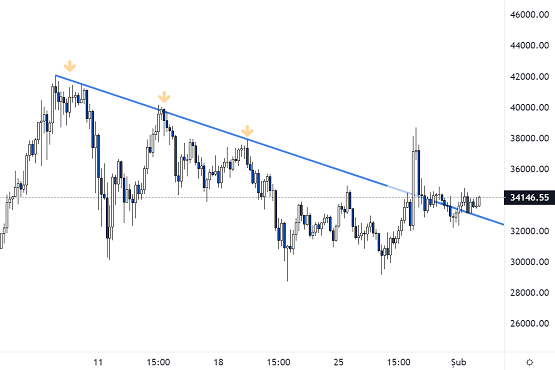 Ethereum again approached the $ 1400 limit after the last 4 days of bullish movements. Ethereum, which we like both fundamentally and technically, continues to stay on the positive side of our short-medium and long-term expectations. The amount of Ethereum held on exchanges has hit a record low. DeFi lockdown exceeded $ 27 billion. These are all positive parts of the scenario in terms of ETH. After a small correction yesterday, the ETH-BTC scissors started to turn their hand to the ETH side again today.

When we consider ETH / USD technically; We see that the peak levels have stabilized after three records in the last two months; Due to this rising triangle squeeze, the rise of ETH in the new record of $ 1480-1500 in ETH may be faster due to the breaking of the triangle. We are following the reaction at the support levels for pullbacks. The outlook is positive and bullish. 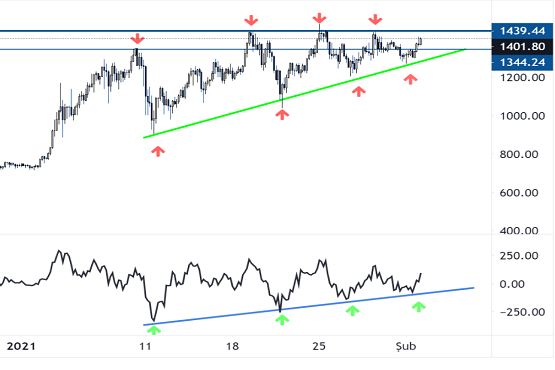 AVAX is pricing at $ 13.00 this morning, up 2% against the dollar. After the flag formation it created, it entered into the bullish channel with the reaction from the $ 10.90 level. The controversy between buy and sell positions has been going on in the $ 13.00 channel midband for the past few days, and instability has caused prices to hang in this area. In possible decreases, the lower channel of $ 12.50 may come to the agenda, but if the winning course with buyers breaks the upper band of the $ 13.50 horizontal channel (shown in orange), it may create pricing of $ 14.00 in the AVAX / USD parity. The prices targeted by the flag formation remain in the upper regions, but maintain their potential in the medium term. 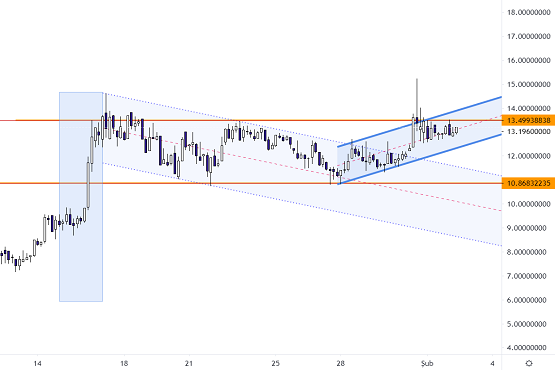 Although XRP was calculated with a 2% change this morning, it is listed at around $ 0.3830, 51% below the 0.76 peak it tested yesterday. It would be better to consider and evaluate many factors instead of directly attributing this decrease to a cause. The sudden sales after the SEC case gave investors two options: wait or sell at a loss. For expecting investors, it was the main story of the business for investors who were waiting for the expectation that XRP will go to $ 1. On the other hand, the manipulations and the continuation of the price that went before the basic infrastructure was formed, as always, did not surprise and brought a rapid return. As we have stated in our previous bulletins, in order for XRP to remain stable at certain levels and to get rid of sales pressures, the outcome of the lawsuit must be clarified or a permanent confidence environment must be established regarding the result. News that an Asian stock exchange will delude XRP is also on news sites this morning.

When the XRP / USD parity is analyzed technically, it is seen that the pair is at the levels before the mentioned sudden increase. As long as the neckline of the double bottom formation remains above the $ 0.3720 level, the $ 0.4200 levels may come back on the agenda with a small recovery, as oscillators indicate that the bottom is reached and there may be recovery movements. We have stated in our written and visual analyzes that we shared with you in the morning that there may be increases up to 0.50, but the analysis did not occur after the current level. All day long investors should keep an eye on $ 0.37. The rest of this region may also be troublesome in terms of reactions. 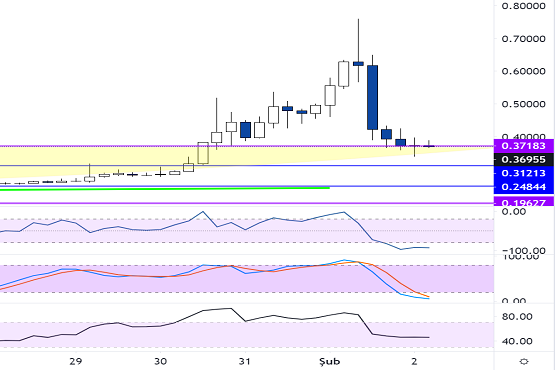 Litecoin is pricing at $ 136.00 this morning, up 3%. The numbers of "addresses with buyers", which are directly proportional to price from on chain data, are growing rapidly, indicating the number of successful transfers above zero in Litecoin. Although the expectations for this cryptocurrency, which was developed as the first altcoin and has the same working principle as Bitcoin but is much faster, are high in the long term, the ongoing horizontality has reflected negatively on Litecoin on the basis of return. We maintain our strong positive expectations for LTC, which still has a high market share, if it escapes sales pressure. When we look at the entries to the Grayscale Litecoin fund, we see that 37,735 LTC was received in a 24-hour period. This shows that the demand continues.

When the LTC / USD parity is analyzed technically, we see that the downward trend that has been continuing since January has squeezed the prices together with the decreasing peaks and stable lows. This tightening is now in the extreme zone of the triangle and if the $ 136.50 level is broken, purchases may increase and bring strong increases in the LTC / USD parity. The Bollinger band appears to open at its ends in the 4-hour period, signaling sudden rises or falls in the widening band. For Litecoin, which will support this level as long as it remains above $ 136.50, a bullish scenario is predicted compared to a bearish position. The $ 138.30 level in the Fibo'50 zone will work as the first resistance and when it is overcome, the $ 144.80 level may come into question. Persistence on the downtrend should be followed during the day. 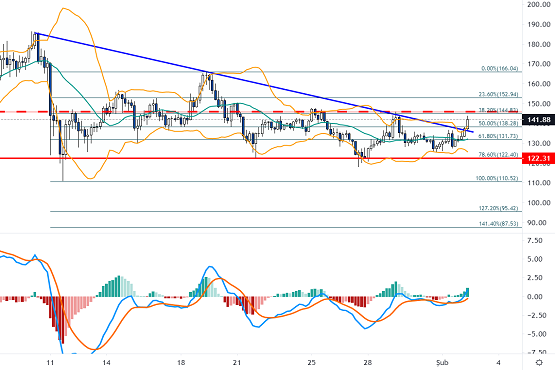 The LINK / USD pair is trading at $ 23.25 this morning, up 1.5%. As of February 2, 2021, DeFi Pulse data show that the total assets locked on the platform reached $ 27.46 billion. According to CoinGecko data, the total market value of DeFi protocols is calculated as $ 52.99 billion. We see a rapid increase in value in the decentralized financial ecosystem, where interest is increasing. Our expectations for LINK, which was traded below $ 5 a year ago, increased almost 10 times between January and August, and is the largest crypto currency in terms of DeFi's market value, continue to be positive in the same direction.

When the LINK / USD pair was technically handled, we stated that LINK is still discounted and new records may come to the agenda in the near future. For the price reacting upwards with support from the $ 21.70 channel lower band, the parabolic SAR also confirms the bullish position by staying below the price, and another support comes from here as the $ 21.70 level where the price reaction comes is the Bollinger middle band. Confirming the rise together, these indicators could create a movement on the daily chart reaching $ 25.80, which is the Bollinger upper band and also the channel midband. 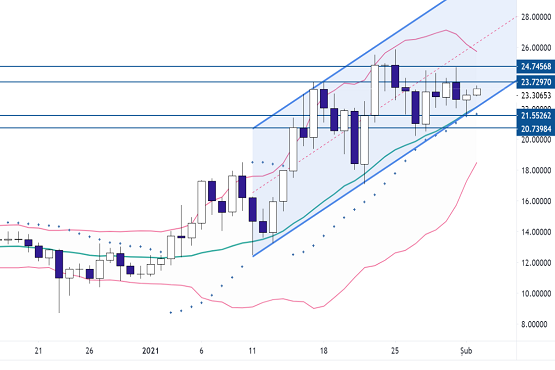 BAT / USD parity is priced around $ 0.3190 this morning with an increase of 1%. Testing the bottom levels in the bullish position each time higher, caused a parabolic uptrend. The last retracement to the $ 0.3000 levels occurred even in the upper zone of the trend. This may be due to the prices being seen as a buying opportunity in the withdrawals. Backed by the volume, the rises could create pricing at $ 0.3410 in the Fibo'61.80 retracement, where the price strengthening and staying strong will increase the potential of $ 0.3820, the double bottom target. 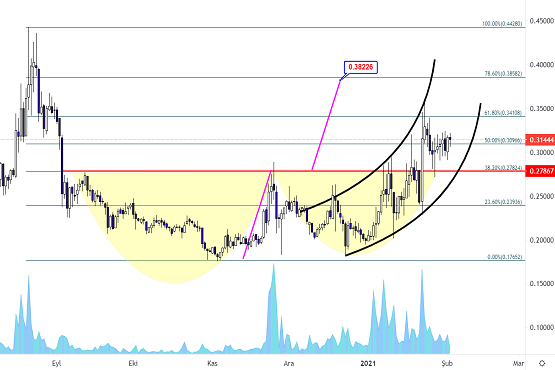