Switzerland-based Sygnum Bank is starting to offer its customers staking services for Ethereum 2.0 with a yield rate of up to 7% per year.

Mining firm Argo Blokchain, headquartered in London, announced that it had mined 167 BTC and BTC equivalents throughout the month of June, and announced that it was considering the possibility of a secondary listing on the Nasdaq.

The UK-based hedge fund Marshall Wace plans to invest in areas such as blockchain technology, payment systems for digital currencies, and stablecoins.

FUD from the People's Bank of China

CoinShares purchased Alan Howard's Elwood Blockchain ETF index for $17 million, while the fund has more than $1 billion in assets under management (AUM).

Allied Payment announced that it has partnered with NYDIG, which enables community banks and credit unions to offer consumers the ability to buy, sell and hold Bitcoin.

The World Economic Forum, in an article it published, stated that it thinks that corruption in government systems can be reduced with blockchain technology.

In a statement made by Goldman Sachs, it was stated that Ethereum has all the features that can surpass Bitcoin as a store of value.

Bitcoin, which gained 2 percent in the morning hours, is priced at $ 34,880. On July 6, with the effect of the FUD news from the Central Bank of China at $ 35,000 levels, Bitcoin, which declined to $ 33,500, started the day positively. When we examine the chain data, we interpret the net $205 million Bitcoin outflow from the stock markets yesterday and the 6% increase in the number of new addresses in the last 24 hours as of the morning hours as positive.

When we consider the BTC/USDT parity technically, BTC, which broke the downward trend that has been going on since May 10, retested this descending trend yesterday, while the RSI found support at 43.54 levels. Priced at $34,880 as of the morning hours, BTC Fibo is priced just above the 23.60 retracement level ($34,828). If it can be sustained above these levels in the 4-hour period, the $35,600-35,800 band will work as the closest resistance levels. If the price starts a downtrend, the $33,500 levels will be a strong support level. In the short term, buying near support and selling near resistance will be a healthier strategy. 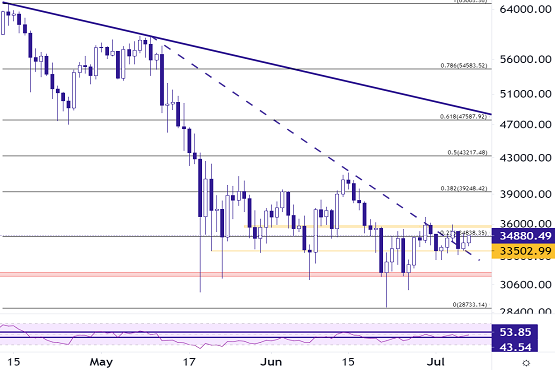 Ethereum, which gained value by 2.5 percent in the morning hours, is priced at $ 2379. We see the effect of positive news on Ethereum, such as the statement by Goldman Sachs that Ethereum can surpass Bitcoin as a store of value, and the ETH 2.0 staking service announced by Sygnum Bank. Considering the London hard fork that will take place this month and the positive news flow, we maintain our medium-term positive view for Ethereum.

When we consider the ETH/USDT parity technically, we see that it is priced at $2379, just above its 50-day moving average ($2370) as of the morning hours. If Ethereum manages to hold above its 50-day moving average, we expect the price to move towards the $2438 levels. On possible retracements, the closest support level will be the $2329 levels, which coincides with the Fibo'23.60 retracement level. MACD and Parabolic SAR are maintaining their upside signal. 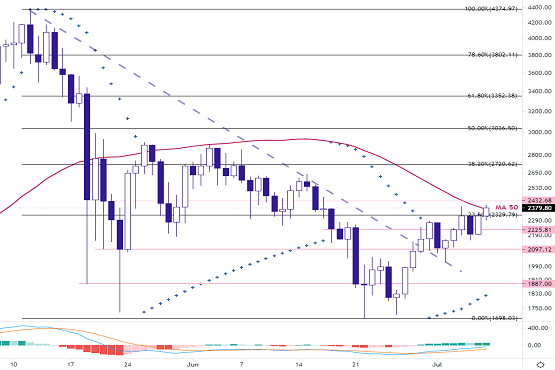 AVAX, which gained about 2.5 percent in the morning hours, is priced at 13.74 dollars. When we consider the AVAV/USDT parity in a technical sense, AVAX, which broke $12.94, which corresponds to the important resistance level Fibo'50, and at the same time, the 30-day moving average of $ 12.80, with a high trading volume, made its daily close above these levels. AVAX, which has risen up to $ 14.20, made a correction towards the level of $ 12.94, which is the Fibo'50 tranche, with the reaction it saw from these levels. Finding support at $13 levels, AVAX's short-term target is read as $15.40. 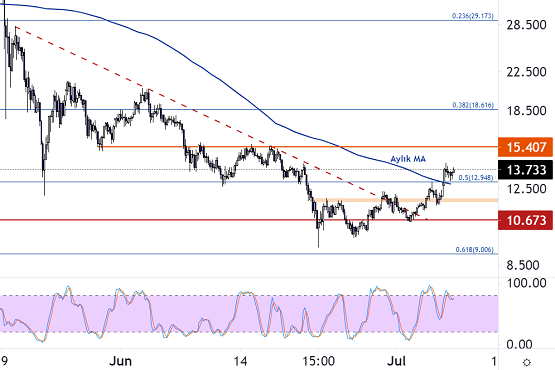 Ripple, which has risen by 1 percent in the morning hours, is priced at $ 0.67. In Ripple, which has not had an important news flow for a long time, a response letter to be written to Ripple by the SEC on July 8 is expected. When we consider the XRP/USDT parity technically, we see that XRP, which has been in an upward trend since June 22, continues to move on this trend. If it breaks the resistance at $0.70 to the upside and sustains at these levels, we can expect a move towards the $0.75 level for XRP. We see that the price has been stuck in a certain area recently. On possible retracements, short-term trading can be done, with $0.64 levels as support. Parabolic SAR maintains its sell signal for XRP. 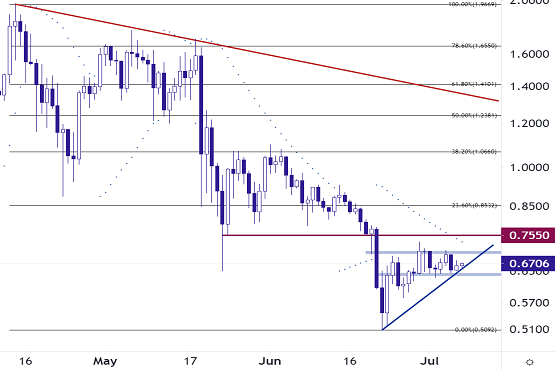 Litecoin, which gained value by 1.26 percent in the morning hours, is priced at $141.75. When we look at the LTC/USDT pair technically, we see that it is priced above the weekly DEMA ($139) level, and when we examine it in the 4-hour period since June 22, it continues its upward movement. If the price continues to move up, the break of the $144.84 levels, which coincides with the Fibo'23.60 retracement level, is very critical and an upside break of these levels could accelerate the price action towards the $150 levels. The $139 levels will act as the closest support levels in case of a negative news flow or a general pullback in the market. We see that the RSI is close to its resistance at the 55 levels. Short-term trading can be done by following support and resistance. 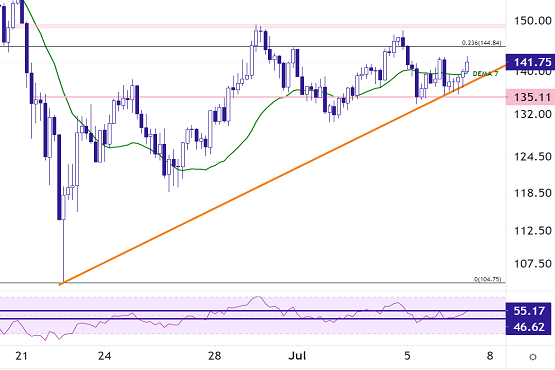 LINK, which gained 4.89 percent in the morning hours, is priced at $ 21.08. When we look at the LINK/USDT parity technically, we see that it broke the resistance at the correction level of Fibo'23.60 upwards and remains above these levels as of the daily opening. The nearest resistance level is at $21.60, and if these levels are broken to the upside, we expect the price to move towards the $23.00 levels. On possible pullbacks, $20.01 levels, which coincides with the weekly DEMA level, will act as the nearest support level. Parabolic SAR continues to support LINK in the buying direction. In the short term, buying near support and selling near resistance may be an appropriate strategy. 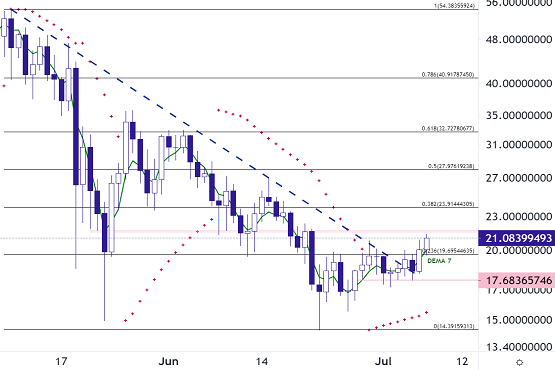 BAT, which gained 6.5 percent in the morning hours, is priced at $ 0.63. BAT, which broke the rising minor trend downwards at $0.58 yesterday, when we examined the BAT/USDT parity technically, broke this trend upwards with a trading volume much above the average with the new daily candle. Along with the trend break, it also broke the $0.60 level, which corresponds to the monthly moving average, to the upside. When we examine it in the 4-hour period, it continues the signal it gave yesterday in the direction of red from the stochastic extreme asthma region. As long as it persists above the monthly moving average, the next resistance zone is Fibo'38.20, the $0.71 level is read as the target. 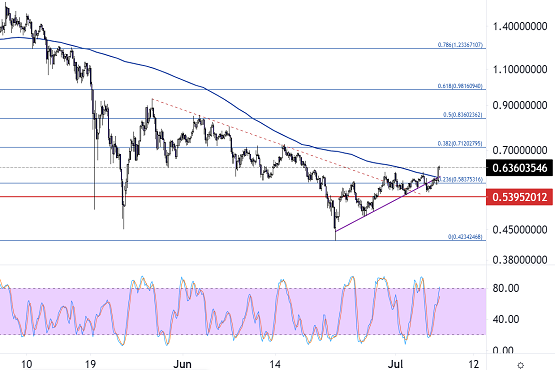