According to the Economic Times report, it is said that there are studies on whether the 2% tax on services provided by e-commerce companies in India will also apply to cryptocurrency exchanges.

Investing in Blockchain Capital from PayPal and Visa

Companies, including PayPal and Visa, have invested in the $300 million fund of Blockchain Capital.

Stronghold Digital Mining, located in Pennsylvania, USA and mining BTC with the wastes generated as a result of coal burning, received an investment of 105 million dollars in the investment round.

VanEck CEO stated that after the Bitcoin ETF decision he applied was delayed again, investors showed high demand for the BTC ETF and the SEC should approve this application.

In Iran, the police detected a factory where illegal cryptocurrency mining was carried out and seized 7,000 mining devices in the raid.

The European Data Protection Board pointed out that data privacy is very important in the digital Euro issue and stated that it is ready to advise the necessary institutions on this issue.

After BTC legalization in El Salvador, an opposition lawmaker and a group of citizens filed a lawsuit against the Bitcoin law.

When we look at the BTC/USDT parity technically, Bitcoin, which had high intraday volatility yesterday, has withdrawn to its lowest level of $ 28,800 as of last January. With the strong support it found at these levels, it is priced again in the band of 30,000-40,000 dollars. When we examine it in the daily period, as of May 19, while there is a decrease in the daily closings, the RSI is on the rise. This showing that the trend is on a reversal is confirmed by yesterday's close being on the plus side. BTC, which rises above the 32.000-33,000 resistance zone again, will continue its upward movement unless it falls below this zone again. 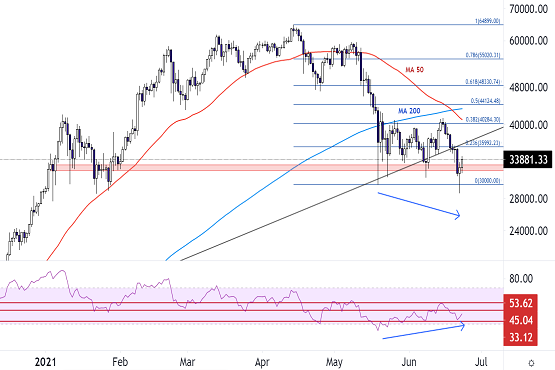 Ethereum, which rises by 6 percent in the morning hours, is priced at the level of 1992 $. When we examine the chain data, there were approximately 458 million Ethereum entries in the stock markets yesterday. Although this situation is quite normal for the volatile market experienced yesterday, it will be healthier to experience ETH outflow from exchanges to wallets for the continuity of the upward movement. On the other hand, as we have covered extensively in our bulletins before, the second testnet phase for the London Hard Fork, the Rinkeby testnet, will take place today. If there is no negative situation in this testnet, it will have a positive effect on the price.

When we consider the ETH/USDT parity technically, ETH, which was priced below its 200-day moving average by falling to the level of 1700 dollars yesterday, made its daily opening above this average. For ETH, whose initial resistance is at $2079, buying near support and selling near resistance may be a healthier strategy for the short term. In order to talk about a permanent rise for the ETH/USDT parity, it will be important to break the downward trend, which has been continuing since May 12, and to maintain its permanence above the $2280-2300 band. 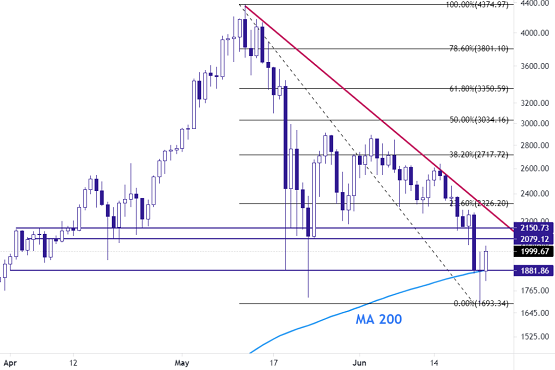 AVAX is priced at $11.49 with an approximate 8.4 percent gain in the morning hours. When we look at the AVAX/USDT pair technically, AVAX, which is priced just below the resistance area of $11.40-12.00, rose yesterday with the support it found near the $9.00 levels, which is the Fibo'61.80 tranche. In AVAX, which is currently priced near the resistance zone, if the resistance is broken, price movement is expected towards the descending trend level of $ 12.90, which also corresponds to the Fibo'50.00 slice. In this period, when we think that the price movements of Admiral BTC will be decisive for the direction of the market, we think that the recovery in AVAX can continue if there is no negative news flow in BTC. 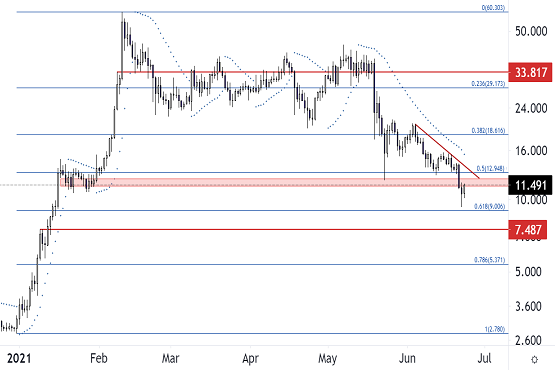 Ripple, which has risen by 13 percent in the morning hours, is priced at $0.62. According to the latest developments in the case, Ripple wants a former SEC employee to be deposed under oath, but Ripple and the SEC could not find any common ground on this issue. That's why they want Judge Netburn to decide whether that can happen. It is stated that on the dates presented by the SEC, a letter will be written on this subject by the parties on June 24. Looking at the case in general, the course for Ripple is progressing positively.

When we look at the XRP/USDT parity technically, XRP, which fell to $0.50 levels with the pullback in the market yesterday, is above the weekly average at $ 0.62 in the morning. As long as it holds above the weekly average, the first level of resistance will be the $0.65 level, where the two-week average comes in. If it cannot hold on to the weekly average, pullbacks towards the support at $0.54 and reaction buying from the support closes can be seen. Although we maintain our long-term XRP view as positive, we think that buying near support and selling near resistance will be healthier due to the volatility in the market in the short term. 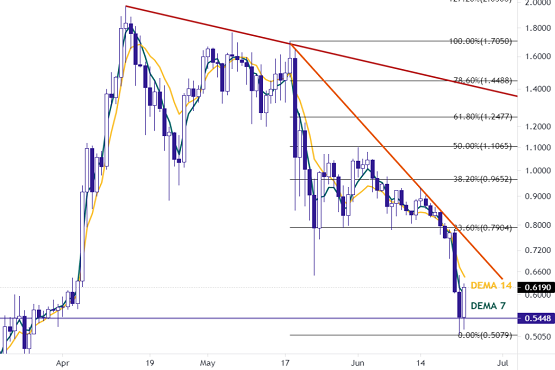 Litecoin, which rose by 7 percent in the morning hours, is priced at $128. When we examine the chain data, there is an increase in new and balance accounts for LTC. Despite the volatile movements experienced yesterday, we positively evaluate the increase in the number of new addresses in LTC. For the long term, we consider the prices where Litecoin is available at a discount.

When we look at the LTC/USDT parity technically, LTC, which retreated to the Bollinger lower band with the pullback experienced yesterday, continues its movement towards the Bollinger middle band of $ 142 in the morning. A short-term buy-sell strategy can be followed, with the Bollinger lower band being support and the middle band being resistance. In case of persistence above the $142 levels, the $150-$155 band, which corresponds to the downtrend, will be the second resistance levels, respectively. The MACD is signaling in the buy direction. 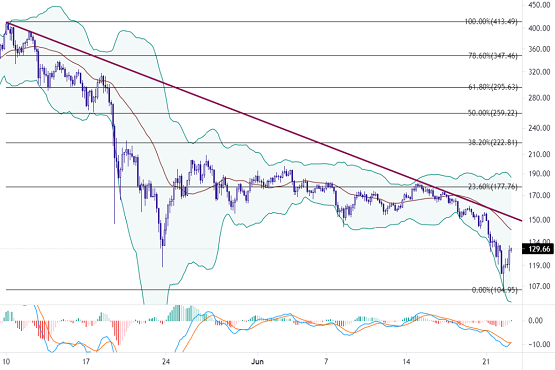 LINK is priced at $18.30 with an increase of 8.5 percent in the morning hours. When we examine the chain data for LINK, there is a tendency to recover in the 7-day average of the number of active and new addresses. However, when the 7-day average of the transfer between exchanges and wallets is examined, it is seen that the outflow from exchanges to wallets is dominant. That's why we interpret LINK's long-term outlook positively.

When we consider the LINK/USDT parity technically, LINK, which broke the two important supports, $ 20.20 and $ 17.30, with the volume sales of the past 2 days in the daily period, is priced again about $ 17.30 with the reaction today. As of yesterday's close, we expect LINK, which is holding on to the lower bollinger band, to rise towards its next target of $ 20.20 as long as the rise holds the support level of $ 17.30. After two volatile days, there has been an increase in reactions, but the continuity of these reactions is important. If there is no negative news flow in the short term, the outlook is positive. 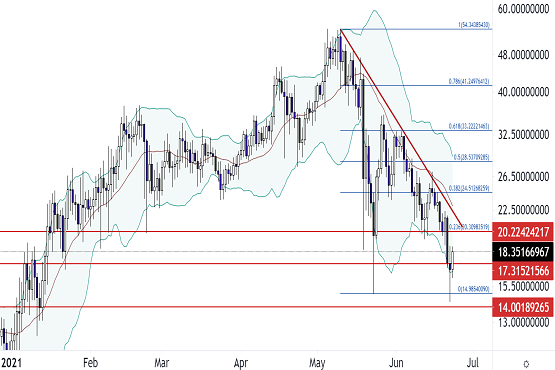 Technically speaking, BAT/USDT parity, which is priced at $0.5391 with an increase of 11 percent in the morning hours, is priced in the Bollinger middle band. If Bollinger breaks the middle band to the upside and sustains there, the first resistance will be at $0.56. Although the MACD supports the bullish move of BAT in the buying direction, if Bollinger fails to maintain its middle band, pullbacks towards the support at $0.50 can be seen. We consider it a healthier strategy to buy near support and sell near resistance in the short term. 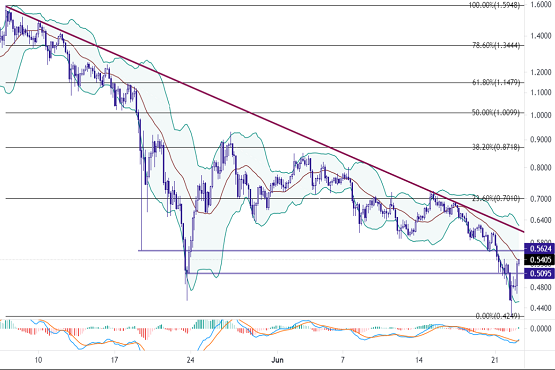