In a recent statement, Elon Musk has announced that Tesla will no longer accept Bitcoin for vehicle purchases on the grounds that Bitcoin is not environmentally friendly due to its mining activities.

Elon Musk Has Been Reported to CIMER

Tesla CEO Elon Musk has been reported to the Presidency's Communication Center (CIMER) on the grounds that he manipulated cryptocurrencies with his tweets and caused people to suffer financial damage.

Korean-based technology giant Samsung has announced that its smart phones will support Ledger cold wallets. With this development Samsung Galaxy smartphone users will be able to manage their Bitcoins on their phones.

Investment management company BlackRock’s CIO Rick Rieder has stated that Bitcoin is an interesting and durable asset and it will be a part of the investment arena in the following years.

City of Williston Will Accept Cryptocurrencies for Utility Bills

The City of Williston of North Dakota is planning to add cryptocurrencies to its online payment services for utility bills.

Cuban President Miguel Díaz Canel plans to cope with the economic turmoil in the country that deteriorated with the COVID-19 pandemic with the help of cryptocurrency. Cuban government officials examine crypto adoption as a way to eliminate the financial turbulence in the country.

The Kazakhstan government will create a new plan to support the development of cryptocurrencies and blockchain technology and their daily use. Monitoring the cryptocurrency exchanges through the Astana International Financial Center and establishing certain standards for interaction with local banks and customers are among the recommendations.

With Bitcoin  falling from $60,000 to $42,000 in the last week, it has caused great fear and panic in the market. However, while the chain data did not confirm this decline, Tesla and Musk, who were seen as responsible for this decline, gathered a great reaction. Stablecoin inflows continue in the market and the total cryptocurrency market size remains above $2 trillion. BTC funding rates also indicate that buyers are high, while there is a decline and mismatch between metrics. 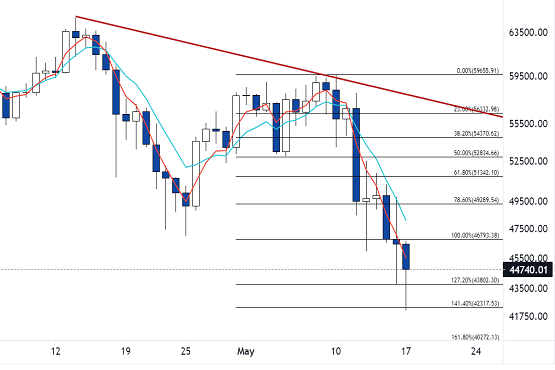 Ethereum is trading with sellers, 3% change from Asian times, while trying to recover towards $3,500 levels. While there are losses in ETH, market confidence still continues. Demand for the ETH 2.0 lockout is at a record high. Rather than the recent decline of the market in the last few days, the direction of the outlook is in the direction of accumulation. While the DeFi sector has a value of over $70 billion, this figure was around $50 billion in April.

When we consider ETH/USDT technically, the bullish channel that had existed since March 2020 was broken in early May and ETH quickly went above the $4,000 level. After the OBO formation, the target value was seen and after testing the $3,100 level, it retested its old channel. The neckline where OBO is formed goes through the $3,600 zone. Therefore, breaking this level will speed up the movements. Dominans continue to remain strong on the ETH side. 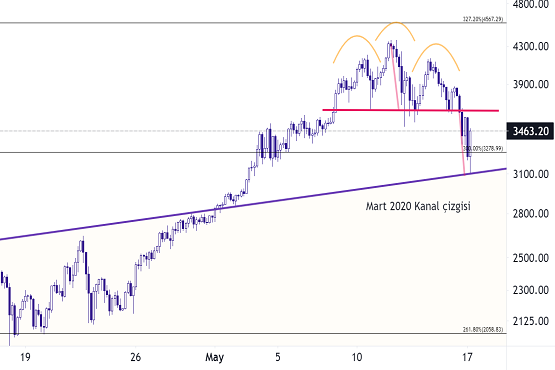 AVAX, which lost 7% in the morning hours, is priced at $34. With a total market value of $4.9 billion, AVAX's closest competitor SOL has a market value of $13.6 billion. We see that AVAX, which has long lagged behind compared to its competitors, still maintains its discount. When we consider the AVAX/USDT parity technically, AVAX, which has lost value with the general decline in the market, is priced just below $34.56, which corresponds to the 50% slice of the Fibonnaci retracement level. AVAX, which has been moving inside the rising channel since the end of April, continues its price movement from the lower band of the channel to the middle band. If AVAX closes above the 50% slice of the Fibonacci retracement level, we expect it to continue its price movement towards the $39 level, a strong resistance point. If it is priced below the Fibo'50.00 correction level, first the $32 levels and then the $30 levels, which corresponds to the 38.20% level of the Fibonacci retracement level, are seen as support points. 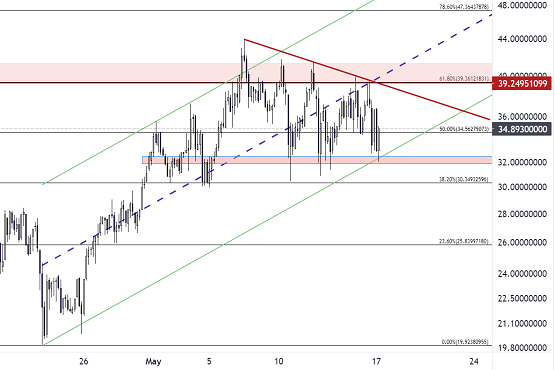 Ripple is pricing at $1.41 levels, down 2% in the morning hours. The SEC was expected to make its defense on May 14. We see that no information has yet been given to the market regarding SEC defense. Also, on May 21 this week, the SEC and Ripple will meet via teleconference to discuss their dispute over documents. Finally, the Ripple side requested the dismissal of the case, and the court asked the SEC to explain why ETH and BTC are not capital intermediaries. 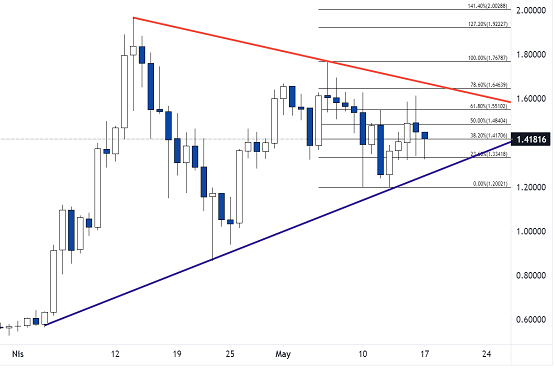 LTC  is pricing at $275 this morning, down about 7%. With the negative news in the market and the retreats caused by this news, it reached the level of $263, starting from the peak level of $413. Looking at the chain data, the number of LTC active addresses, which continues to increase despite this correction move, has reached its highest levels. Considering that the amount of stable coins in the exchanges has increased, we consider the long-term outlook for LTC to be positive.

When we consider the LTC/USDT parity in a technical sense, LTC, which continues its price movements within the channel it has created since November 2020, started a correction movement towards the lower band of the channel on May 10 with the reactions it received from the 141.4% slice of the Fibonacci correction. Finding support from the 50% slice of the Fibonacci retracement level in the 4-hour period, the initial resistance level appears to be $335, which corresponds to the Fibo'100 level. In withdrawals, the channel lower band and Fibo'38.2 levels are seen as support. 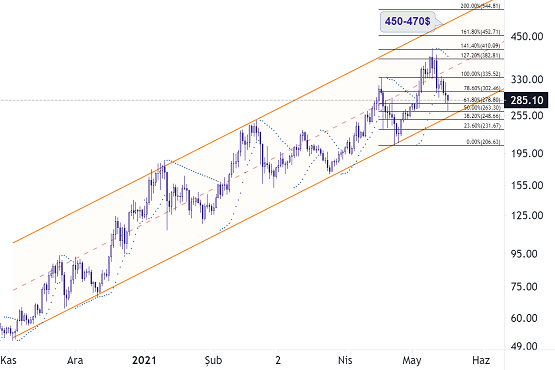 LINK,is pricing around $38 this morning with a loss of about 6%. When we consider the LINK/USDT parity technically, the price movement continues in the rising channel it has created since December 2020. With the reactions it received from the peak level on May 10, LINK started the correction movement with the rapid price pulls to the middle band of the channel, and continued its price movements in the descending channel in the 4-hour period. The $33 -34 range, which corresponds to the lower band of the major rising channel, is seen as an important support level for LINK, which turned its direction up in a 1-hour period with its response from Fibo '38.2 level. In upward price movements, both the upper band of the falling channel in the 4-hour period and the mid-band of the major rising channel, $42, are seen as important resistance levels. Although the MACD, which gives a sell signal in a 4-hour period, shows that the price may continue with minor pulls, we think that the price may continue to move up from the lower band of the channel, with the recovery signals that may be experienced in the MACD. 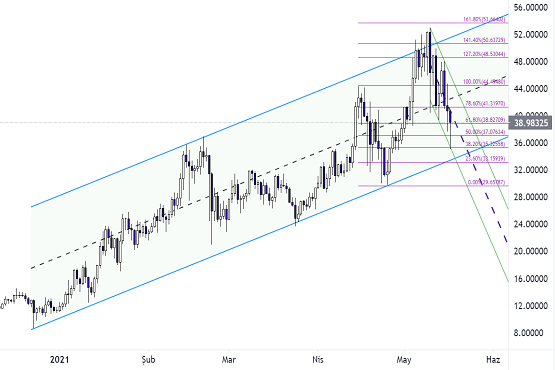 Basic Attention Token, which dropped 5% in the morning hours, is priced at $1.08. According to chain data, the number of active addresses for BAT, which saw the lowest level of active addresses for a year on May 12, continues to increase for the last few days, according to these data, it is possible to say that investors' interest in BAT has started to increase in the past few days.

When we consider the BAT/USDT parity technically, BAT, which has continued its movement in the rising channel since the end of April, is priced above the 23.60% slice of the Fibonnaci retracement level by moving under the rising channel with the general decline in the market. As a support point, we can consider $1.03, which corresponds to the Fibo'23.60 retracement level. Because if this level breaks downwards, the zone will become the neckline and OBO will initiate. The target of such a large OBO will be between 0.50-0.60. Therefore, the progress of the general market and the permanence of BAT over the 1.00-1.03 zone will also terminate the unconfirmed OBO. Reactions can be seen, if the price moves up, the $1.16 level, corresponding to the 38.20% slice of the Fibonacci retracement level, could be the first resistance point. 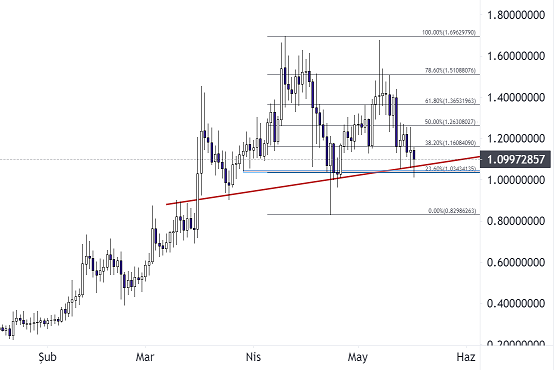