Thailand will ban the usage of digital assets for the payment of goods and services from April 1, 2022, according to a report published by Bloomberg on March 23. It was stated that this new regulation would not affect trade or investments in digital assets.

Speaking at the BIS summit on Tuesday, ECB President Christine Lagarde claimed that the cryptocurrency ecosystem was a threat, and that the Russian ruble evaded sanctions by infiltrating cryptocurrencies and stablecoins.

Federal Reserve Bank of New York President John Williams says stablecoins carry the potential to play a useful role in payment.   However, he said, other cryptocurrencies are flawed and highly priced.

Gamestop NFT Marketplace announced its launch on Loopring (LRC), which supports the beta version. Besides, they intend to make access fast, safe and inexpensive to give power to players.

At a panel attended by FED Chief Jerome Powell, he said new regulations would be needed for cryptocurrencies and stablecoins. At the same time, the Fed is investigating the digital dollar, but no decision has been made yet.

According to data from Arcane Research, the Bitcoin S&P 500 correlation recorded its highest level since October 2020, increasing the 90-day correlation rate to 0.49.

Bitcoin gained a 0,10% value during morning hours and is priced around $42.979. When we consider the BTC/USDT pair technically, there is no major change in the outlook. BTC retreated to the 50MA level (40.656) and it climbed up, finding support. In BTC, which is priced close to $43,000, we see that the downtrend in RSI also tends to break upwards. In BTC, which recovered part of the positive price movement yesterday, the permanence price above $42,500 can lead to the $44,000-46,000 zone. When retreating, the 50MA level should be followed. 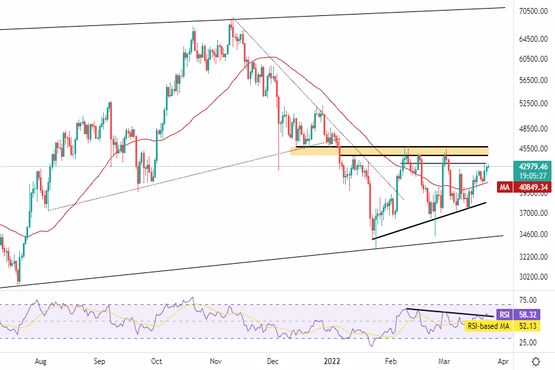 Ethereum lost a 0,40% value during morning hours and is priced around $3023. When we consider ETH/USDT pair technically, ETH broke the short-term minor trend as of November 30, 2021, upwards  and closed the week above those levels. ETH, which holds onto the support level  (50MA), climbed up to $3081 yesterday. We think that the a possible upward movement above the local peak level on March 2 appears in ETH. Price movements towards the $3200-3250 zone might follow. 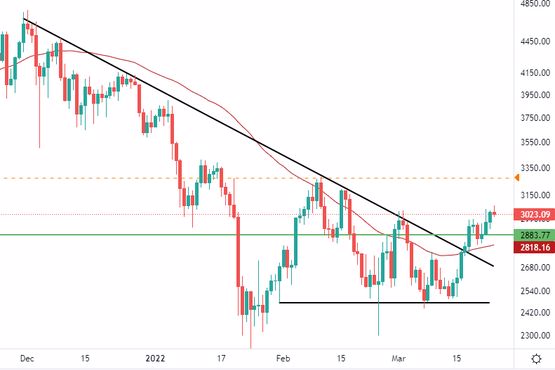 AVAX lost a 1,34% value during morning hours and is priced around $84.80. When we consider AVAX/USDT pair technically, there is no major change. We think that the positive price movement will continue for AVAX, whose performance in the recent period is evaluated positively. AVAX had a stagnated price movement as of January but broke the zone upwards. When sell-offs decreased, the acceleration above $95 became effective. Breaking the downtrend upwards, AVAX has retested this trend and turned it into a new support. If it does not lose the momentum, rise towards $100, the resistance zone marked in blue might follow. 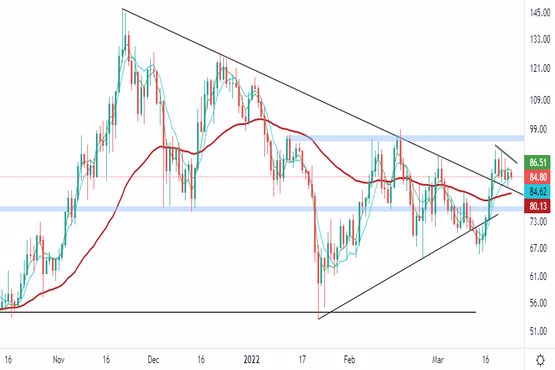 Ripple lost 0,60% value during morning hours and the current price is $0,8343. When we consider XRP/USDT pair technically, there is no major change in the outlook. In XRP, which broke its downward trend with positive news flows, the sideways trend has been in progress for the last few days. In XRP, which was priced just below the $0.8579 level yesterday, the level was tested several times, but permanence could not be achieved. With the upward movement in the daily chart, we expect momentum to be gained and a rise towards$0 .92, which was the previous local peak. 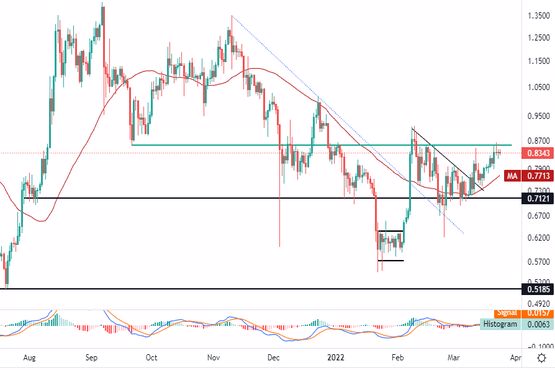 LTC lost a 0,74% value during morning hours and is priced around $121.9. When we consider the LTC/USDT pair technically, there is a minor uptrend formation in LTC, which broke its long-standing downtrend last week and made the weekly closing above this level, as of March 14. LTC, which closed above $121 yesterday, might continue to rise towards $130 if it sustains above this level. 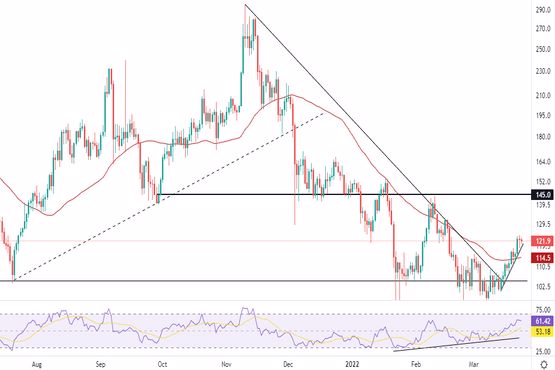 LINK lost a 1,07% value during morning hours and is priced around $15.73. When we consider LINK/USDT pair technically, LINK has price action inside the horizontal channel as of May 26. It resolved from the stagnated price movement dominates over LINK on February and moved forwards the target marked in red. With the rise towards the daily close yesterday, LINK  broke the red zone upwards and left the sales-intensive region as of its daily close. Rises to $18 can be seen for LINK unless $15.10 (the 50MA level) is lost. 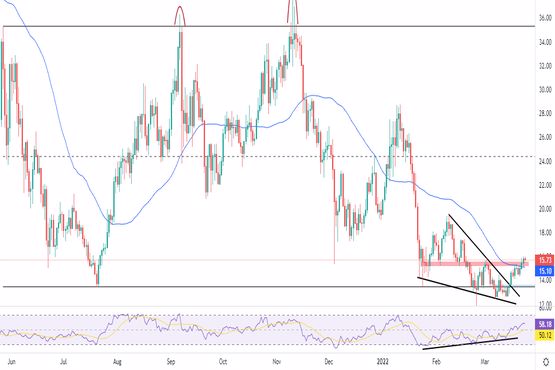 BAT gained a 1,72% value during morning hours and is priced around $0.8461. When we consider BAT/USDT pair technically, there is no major change and the horizontal outlook sustains. We see that momentum is gained with the break of the downtrend and a weekly close is realized above the level of 0.7694 dollars, which corresponds to the 50MA level. For BAT, which we expect to gain momentum again with the market-wide increase, our next first price target is $0.9246 (the 200MA level). In order for this scenario to happen, it should sustain above the 50MA level. 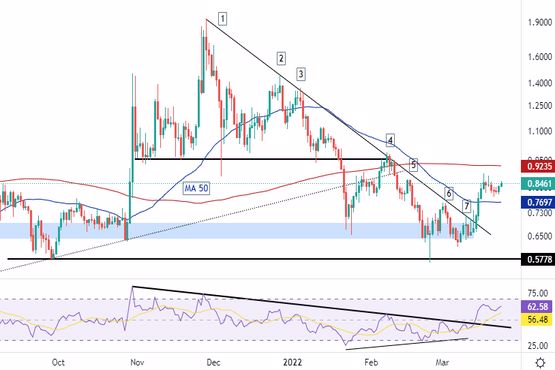