The Last Merge Test for Ethereum

Ethereum's Sepolia and Ropsten Testnets will be followed by the final test before the ETH merge. The merge, which will take place on the Gorlia/Prater testnet, is expected in early August. It is very important that no unsuccessful results have been obtained in any testnet yet. A positive result from this testnet will also create a very safe atmosphere before ETH merge.

Contraction Repeats in the U.S., Fears of Recession Begin

According to the data released yesterday in the US, the quarterly GDP (Gross Domestic Product) saw a negative value for the 2nd time in a row. This means a quarterly contraction for the 2nd time in a row, that is, a recession according to the old definition. But there has been a slight change in the definition of recession, especially after the COVID era. According to the definition announced by NBER (National Bureau of Economic Research), it is defined as "a significant decline in economic activity that has spread throughout the economy and lasted more than a few months". But it is claimed by most economists and news channels that it has already entered a recession.

Work Continues for Cryptocurrency Regulation in the UK

The United Kingdom continues to work on creating a structure where different proposals for cryptocurrency regulation come to the forefront. To that end, the region's Law Commission has issued an advisory focused on determining crypto ownership to protect user rights. The document emphasized that digital assets play an important role in modern society, while guidelines should be established to protect and recognize crypto assets in the digitalizing world.

Francis Suarez, Mayor of Miami, one of the most popular cities in the world, located in the US state of Florida; Time has announced that it will be partnering with Mastercard and Salesforce to release an NFT collection. The NFT collection, which is planned to be released after the ETH merger in September, will be launched as a collection of 5000 NFTs created by 56 native artists.

Controversial Statement from the Chairman of the SEC

SEC Chairman Gary Gensler; He stated that he believes that crypto exchanges should be registered and regulated like stock exchanges. Gensler criticized crypto exchanges for reasons such as custody services and market regulation, saying it created a natural conflict of interest. The SEC's and Gensler's attitudes and regulatory approaches to cryptocurrencies are constantly criticized by the crypto industry.

Bitcoin Letter from Democratic Senators to Fidelity Investment in the US

As it is known, Fidelity Invertmens in the US brought a Bitcoin-oriented investment option to pension funds called 401(k). After this much-discussed decision, we have seen the statements of support of crypto-friendly senators in many places. However, Democratic Party Senators Dick Durbin, Elizabeth Warren and Tina Smith, who are known to be against crypto assets, sent a letter to Fidelity CEO Abigail Johnson asking why they are using volatile and never-tested Bitcoin as a retirement investment in these days when it is already very difficult to invest for retirement.

After seeing a small sell-off with fear and anxiety of recession following the GDP data released yesterday, there was a high volume and strong purchase in Bitcoin. While the recession discussions continue, it is known that the old definition of recession should no longer be used and whether or not you are in a recession is evaluated differently. The US stock market, which started to decline with the bad data in the US, also took flight with the positive announcement of the balance sheets and earnings of giant companies such as Apple, Amazon and Mastercard. 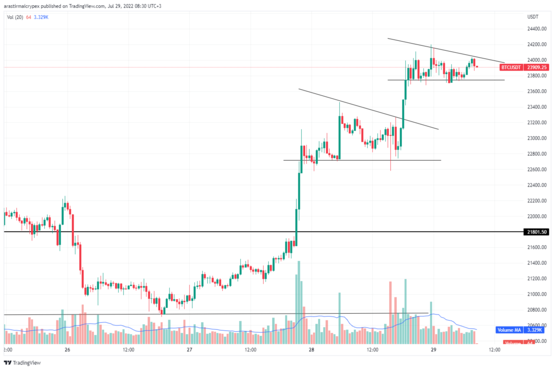 Today, ETH, which gained 0.3% in the morning hours, is priced at $ 1725. The upward movement that started with the US stock markets yesterday brought the breakdown of the $ 1700 levels, which have been stated as a target since the breakdown of the 1300 region in Ethereum. Ethereum, which rose to 1780 levels with the momentum in the market, made a horizontal move after the breakdown, just like Bitcoin, and is currently making a horizontal move between the levels of $ 1710-1755. In Ethereum, where the target is now $ 2000 levels, the first step in Ethereum is to break the 1760 levels, which are the upper band of the current horizontal movement. In a possible decline, we can say that the 1660 level, which we have a hard time in breaking down, can serve as support. 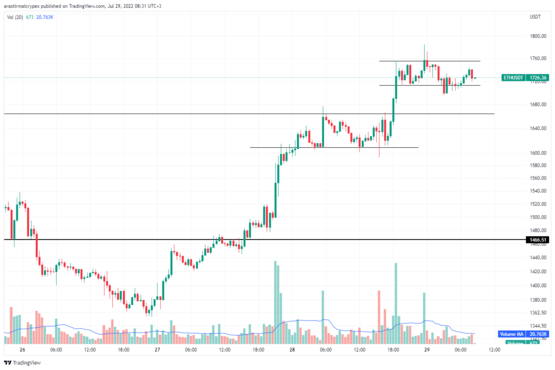 AVAX, which has gained 2.56% as of the morning hours, is priced at $ 24.80. AVAX had moved on an upward trend after a bottom of its 50-day moving average of 19.40. AVAX, which tested and confirmed its support many times afterwards, started to rise yesterday by touching the support point at 22.47. Afterwards, AVAX broke up the levels of 23.20 and managed to advance to the levels of $ 25. 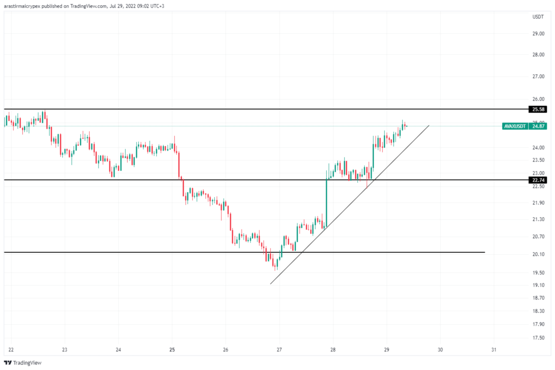 XRP, which gained 1.23% in the morning hours, is priced at $ 0.3785. When we look at the daily chart, Ripple seems to be in an ascending triangle pattern. Ripple, which has repeatedly tested the channel lower band and returned from that level, last left a pin on the support at 0.3256 last week and then started its upward movement. Ripple, which is currently breaking the resistance point, will continue its upward movement with the 0.4750 target if it confirms the breakout with closes above the 0.3770 level. 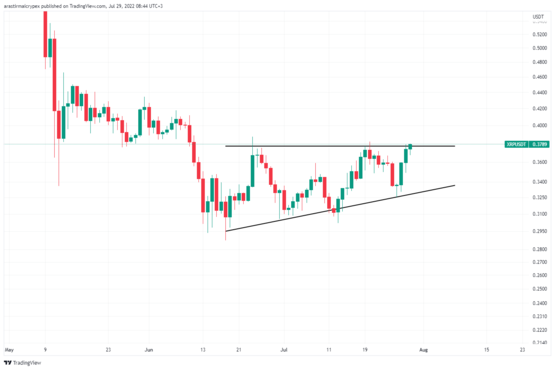 LTC is trading at $64.46, up 1.66% as of morning hours. LTC, which managed to break the channel it has been in for months to the upside, could not break the channel resistance at the 60.50 level. The upward movement in the markets yesterday also provided a breakdown in LTC and enabled it to move to the next target 64.60 levels. LTC, which is currently above the 64.60 resistance, will continue its movement with a target of $ 72 if it breaks here. 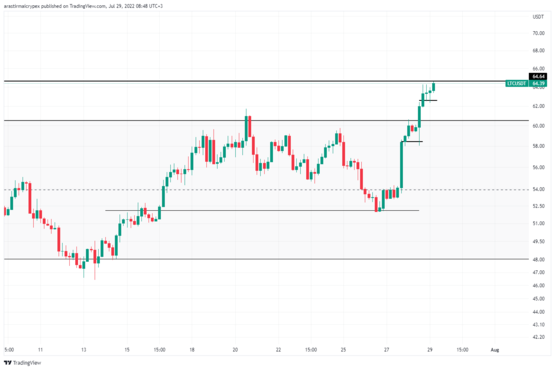 LINK is up 6.9% today at $7.71. With the breakdown of LINK's falling triangle pattern, it advanced to the upper band of the channel to 7.59 levels, then broke the resistance upwards and managed to rise to $ 7.8. LINK, which was at the bottom of the channel at the beginning of the week, had risen to the channel middle band with the reaction it received. However, LINK, which seems to be in a downward trend, managed to raise itself above the channel with a very strong rise afterwards. In case of a reversal, we can say that the 7.59 level will be an important support. 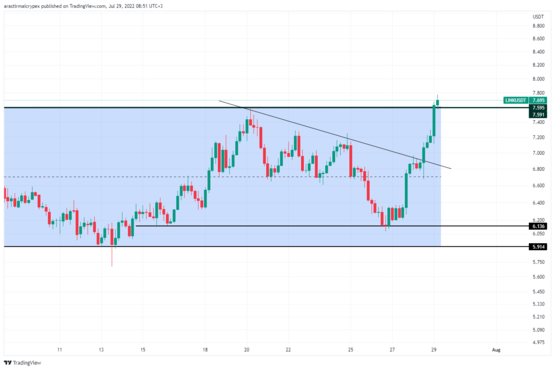 BAT is trading at $0.4136, up 1.74% as of morning hours. While BAT continued its intra-channel movement, it broke its resistance upwards in the triangle formation that fell yesterday and managed to rise in the channel middle band and then to the middle levels of the channel upper band. In BAT, which we see still at low prices compared to BTC and ETH, the 15% increase that came yesterday after the selling pressure last week will hopefully end the selling pressure. 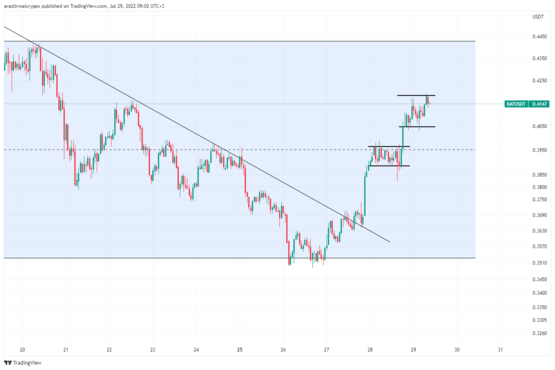