According to the data published by Glassnode, the number of addresses holding Ethereum has increased steadily throughout the year, reaching 51,491,730. Considering that there were 34 million addresses in January, this number increased by approximately 48%.

Ukraine Chooses Stellar Platform to Create Digital Currency
The Ukrainian government has decided to use the Stellar blockchain to create its own national digital currency. Thus, the Ukrainian Central Bank virtual currency will be deployed on the Stellar platform. With the tweet he posted on this, Stellar announced that their partnership has honored the company.

Daily Volume Encryption Money Over $ 1 Billion in Turkey
The last few months of the New Year crypto daily currency trading volume in Turkey 500-600 million range, while this amount to over $ 1 billion as of the new year. It corresponds to almost 1 in 4 of Borsa Istanbul's 40 billion lira trade volume.

After the shortage of supply in the stock markets on the Bitcoin side, there was a great decrease in Ethereum reserves. According to data shared by cryptocurrency analytics company Glassnode, daily ETH output in exchanges exceeded 42 million, reaching the highest level in the last four months.

XRP was drastically devalued after the US securities regulator SEC sued Ripple. XRP investors, on the other hand, sued the SEC to compensate for their grievances due to the loss of value. Investors complained that the SEC wanted to harm investors rather than protect them.

87,900 Bitcoins Withdrawn from Exchanges in 30 Days

Although the Bitcoin price broke a record, Bitcoin's exit from the stock markets continues. Data for the last 30 days show that 87,900 Bitcoins have been withdrawn from cryptocurrency trading platforms. The liquidity crisis caused by the squeezing of supply in the stock markets supports the long-term price increase expectations.

Bitcoin, which has doubled in value consecutively in the recent period, dropped from $ 33,669 to $ 27,734 on Monday, losing about $ 6,000 in value. This one-day pullback went down in history as the biggest intraday drop in Bitcoin history.

One Bitcoin Is Equivalent To 481 Grams Of Gold

Bitcoin is pricing just above the $ 30,000 level this morning with a seller outlook. However, it was a tough day for Bitcoin in terms of price developments yesterday. These drastic changes, especially due to leveraged transactions, can be experienced in market overbought or sales. With prices pulling back a little, many long (buy) positions entered margin trading and buy positions had to close. This situation caused the value of Bitcoin to draw a band of 6 thousand $ in a day. On the other hand, while there is no unannounced development that would disrupt the market, the increase in daily volatility causes the trading range to draw a 3% band.

When we look at BTCUSD technically, BTC does not seem very strong in the 4-hour period, although the $ 28,800 support worked yesterday. However, it is worth noting that the trend is still up. There is still a gap in Bitcoin's futures chart. Therefore, both BTCUSD and BTC1 during the day! Watching the graphics simultaneously can be a guide. The gap up to 29 thousand in the term puts pressure on the spot price. Therefore, focusing on support zones may be more valid in today's transactions. 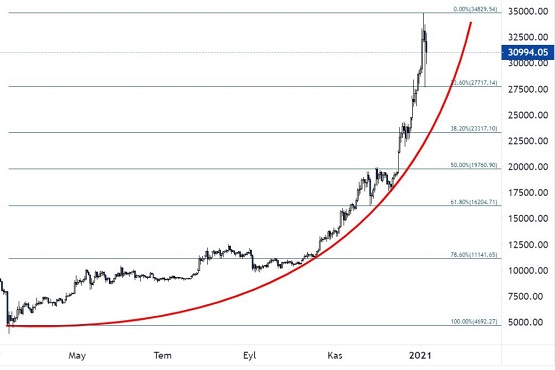 Although Ethereum was trading with sellers this morning in parallel with the general crypto money market, it did not break from the $ 1000 race. The number of Ethereum addresses continues to increase. On the other hand, the network density has increased so much that there has been a serious increase in transfer fees. Currently, users do not receive a return signal from the uptrend as the demand for ETH continues, but price increases continue to be supported. The granting of US banks permission to use stablecoins also gave a sigh of relief for DeFi and the entire cryptocurrency industry. Currently, there is no negative news flow that could affect the market.

When we consider ETH / USD technically, prices are usually in the $ 950-1050 band. Although the $ 880 level is tested due to the rising volatility, this situation due to leveraged positions has not broken the trend. Therefore, withdrawals that may occur during the day can be more prioritized for new positions. There is a loss of momentum in the 4-hour period, but the MACD is still on the positive side. The range of $ 950-1050 also corresponds to the Fibo'38.8 and 23.6 correction range, and transactions can be traced within this horizontal band during the day. 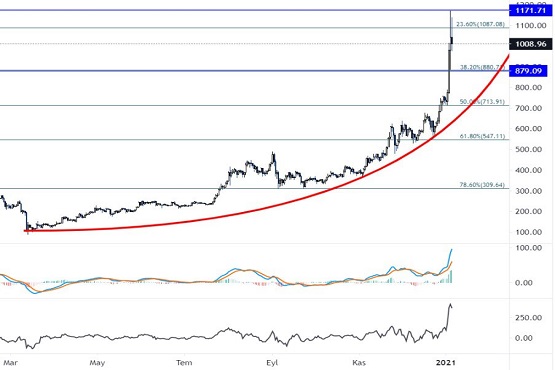 AVAX / USD parity appreciated by 2% on a daily basis and started pricing around $ 3.7. As a result of the rapid increase experienced by AVAX / USD with the expected response at $ 2.80, it started to rise by breaking the major horizontal trend upwards. If persistence is maintained above the $ 3.40 level, the $ 3.75 Fibo'61.80 retracement level of $ 3.75 and above can be discussed. For now, the outlook is horizontal between $ 3.40 and $ 3.75. 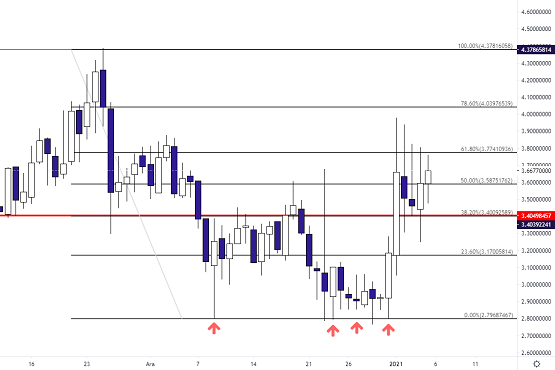 The XRP / USD pair is priced at $ 0.22 in the morning, with a daily depreciation of 3.5%. It maintains a positive yield of 3.3% on a weekly basis. Although we witness small fluctuations in the price of XRP, which still continues its sales course, it does not create positive expectations and a positive course perception for XRP. In recent developments, UK-based financial technology company and application Revolut warned its users and the XRP community, saying that XRP prices could plummet. He then said he could stop trading XRP as well, which few major exchanges remained that did not. Positive thoughts on behalf of XRP in the market have started to move further away as giant companies and stock exchanges openly stated that XRP should be avoided. Currently, only Kraken supports XRP in the US.

When we look at the XRP / USD parity from a technical point of view, we see that after the $ 0.17 level, there is a non-voluminous reaction at the $ 0.22 level. We will be following the $ 0.31 level, which is the target of the double bottom formation outlook it created with this reaction. The formation target can be realized if an infrastructure that supports the rise in macro view is formed. But if a confirmation is received in the XRP / USD parity, which is fundamentally weak, the upward trend can be tested. Response dimensions may be limited, as the trend is still weaker and downward. 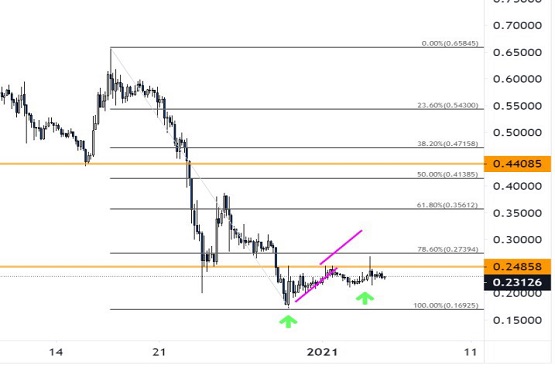 Litecoin is priced at around $ 148 in the morning and down approximately 5%. It provides 15% positive return on a weekly basis. Litecoin also took its share from the volatile movements in the crypto money market, which was active after the New Year, and experienced a strong rise yesterday and then a withdrawal. Considering that this withdrawal was caused by leveraged transactions and buyers led by Bitcoin, we saw correlated movements for both cryptocurrencies due to the very high correlation between Litecoin and Bitcoin. After its strong rise and relatively sharp decline, it ranked 3rd again to XRP as the market value, and it became the 4th largest market value of its own again.

If we interpret the LTC / USD parity technically, we see that it violates its limits by taking it out of the upward channel it has started since mid-December. After the negative correction on the Bitcoin side, it is back to the upper band of the channel remaining between $ 145 - $ 155. In order to see the $ 270 level, which is the target of the double bottom formation, we will follow the persistence in the $ 145 band, which we accept as the critical level. If stability is achieved, we can see more positive scenarios for Litecoin, which has the potential in macro view, led by Bitcoin. Litecoin is still priced 60% behind its all-time high of $ 420. After the Bitcoin and Ethereum movement, our positive opinion continues for LTC / USD, which has potential. 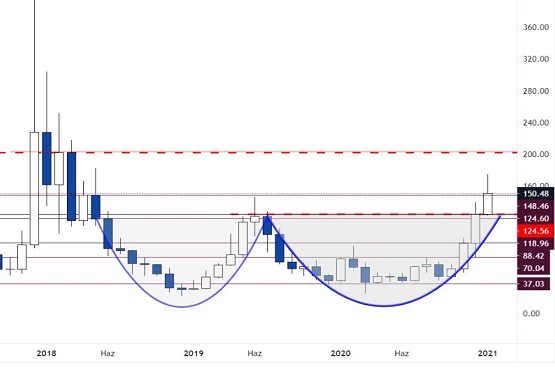 Chainlink has started to come to the fore with the movements it has made for the last few days. The developments in LINKUSD, which rose above the $ 14 level with 4% increases during the day, are positive. First of all, it started to give an advantage to altcoins, with the Bitcoin dominance declining from 72% to 68%. Secondly, the continuation of the rise in the ETH / BTC clipper is a positive development for Ethereum and tokens using the Ethereum consensus. Therefore, for LINK, there are positive stories in front of him if dark clouds disappear.

When we consider LINKUSD technically; As long as it does not drop behind the $ 13.00 level, the double bottom view will continue and with this view, the $ 17.00 levels will remain the target of this double bottom. The descending trend that passed the $ 15.00 level continues. For this reason, the decreasing trend should be broken in order for the purchases to accelerate and the $ 17.00 region to come to the agenda. The outlook is positive and positive. 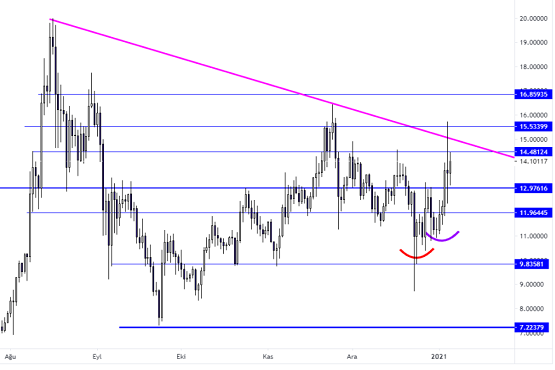 The BAT / USD parity has increased by 2.8% in the 24-hour period and is priced around $ 0.22. The pair, which took its share from the rise led by Bitcoin and Ethereum, later diverged positively and is valued above the market. There were positive expectations for altcoins as Bitcoin dominance also declined to 68% levels. For now, we will be monitoring support levels and Bitcoin prices. 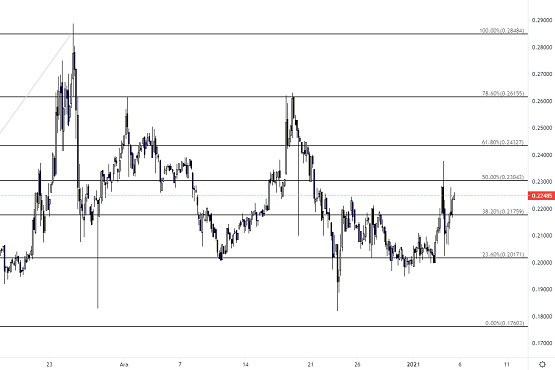