SkyBridge Capital: "We Kept the Positions."

Anthony Scaramucci, Founder and Managing Partner of SkyBridge Capital, said: “SkyBridge started a position worth about $310 million in funds investing in Bitcoin in November and December 2020. We think that cryptocurrency markets represent tremendous growth. Of course, volatility is coming, but I think we want this orbit in three to five years. "

Maker, which is an authority on Dai fixed currencies, a softly fixed, community-managed decentralized currency, has seen a 21% increase in the activity of large wallets in the network this week, according to in-chain data provided by Santiment.

GAU Token's Expected Rise
GAU Token has been announced to have started its tests to work on the Avalanche network and will be listed in SushiSwap soon.With this news, there was a 148% increase in GAU Token in the last 24 hours and a level of 0.1910 was observed. Investor interest continues in GAU Token, which attracts the attention of global funds with its current collaboration.

Nigeria's SEC has issued new regulations to guide the use of cryptocurrencies in the country. The Nigerian Central Bank had previously prohibited commercial banks from facilitating transactions in cryptocurrencies. Now, cryptocurrency service providers who want to operate in the country must register with the regulator and obtain a VASP license.

Report: 97% of Cryptocurrency Hacks Are Against DeFi Projects

Blockchain analyst Chainalysis has released a new report focusing on illegal activities in blockchains. However, it was noteworthy that the most popular target of hackers was DeFi protocols.

Sharing his latest thoughts on Bitcoin on Friday, Dorsey says he does not pay much attention to the price of Bitcoin because he knows that the value of Bitcoin will increase as adoption increases in the long run. However, for Bitcoin, he commented, "I don't follow the price."

As a result of the hard sales in Terra last week, we see that the general sales pressure was met with response purchases on the last trading day of the week and the parity tried to find support from the support of 30,000 dollars. Due to the Fed's monetary tightening steps, the increase in bond yields and the losses experienced in Terra accelerate the escape from risky assets, while the concern that regulation may come earlier and harder than expected is one of the factors that support sales pressure.
Bitcoin lost a 3,23% value during morning hours and is priced around $30.293. Critical support level for BTC/USDT appears to be 28,600. This level is in the lower line of the rectangular pattern (50-week). As the graph shows, it is very important that this level is not lost in weekly-basis candle. We'll follow closures of over $28,600 to regain momentum for purchases. 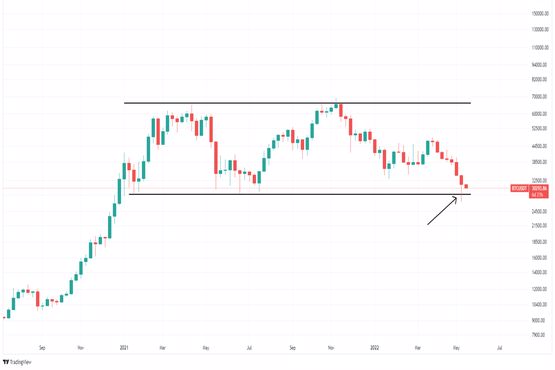 In ETH, where we saw that the level of $1,700 was tested last week, we observed that parallel response purchases to Bitcoin carried the parity above $2,000. With the increase in correlations, the reflection of recession concerns in global markets on cryptocurrencies has accelerated the escape from risky assets and led to an increase in bond yields.

Ethereum lost a 3,33% value during morning hours and is priced around $2074. When we consider the ETH/USDT pair technically, ETH could find support at $1750-1800 (the lower line of the rectangular pattern). Keeping the pivot points we mentioned in the weekly graph is very critical for ETH, and we will closely monitor the response purchases in this direction. In the parity where we see that the downtrend still continues, the prices are below the 8-20 day moving average. 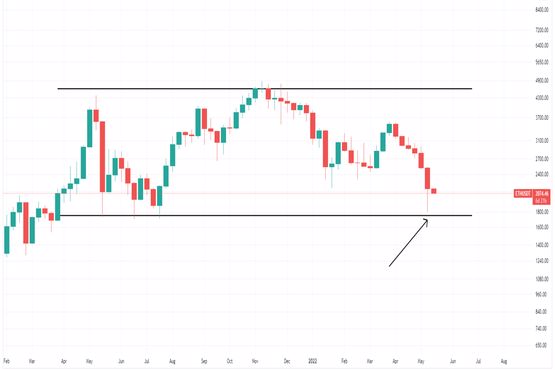 In AVAX, one of the parities most affected by the drop experienced in Terra last week, we see that although it is weak on the first day of the week in the morning, response purchases appeared. While the monetary tightening moves of central banks in the world increase recession concerns and suppress purchases in risky assets, major news flows in cryptocurrencies cause assets to separate from financial markets in the short term.

When we examine it technically, the future statements about Terra in the parity, which we see that the sales pressure continues, will be important in terms of reaction purchases in the parity. When we look at the 4-hour graph in the parity where we see that the downtrend continues, the triangular formation formed at the dip. With the breaking of 36.5 level, which is the resistance point of this triangle, 50 USD can be targeted. 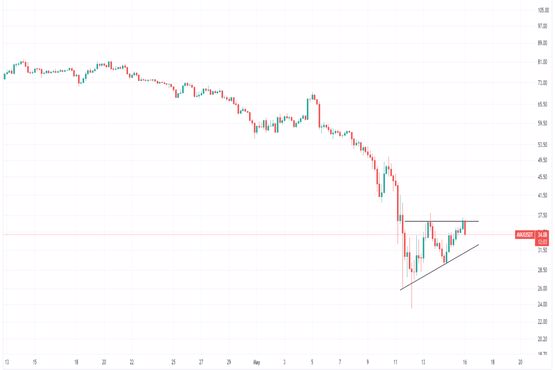 Ripple lost a 3,7% value during morning hours and is priced around $0.4315. When we consider the XRP/USDT parity in technical terms, we see that the uptrend level starting from March 15, 2020, is tested. As shown in the graph, the USD 0.42 levels shown by this uptrend were not lost in the weekly graph last week. 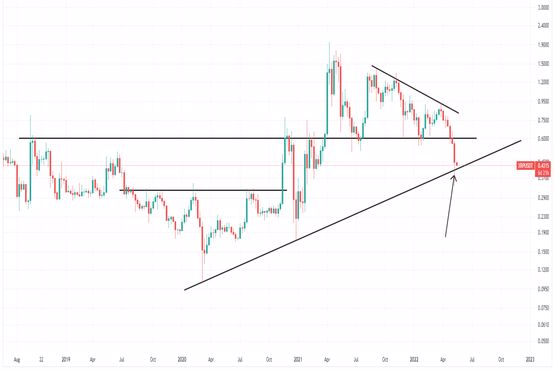 LTC lost a 4,25% value during morning hours and is priced around $68.2. When we consider the LTC/USDT pair technically, there is no major news flow, when sales pressure in altcoins continue. As can be seen in the graph, the level of 68 USD is an important pivot point. We will be monitoring whether this level can be maintained. 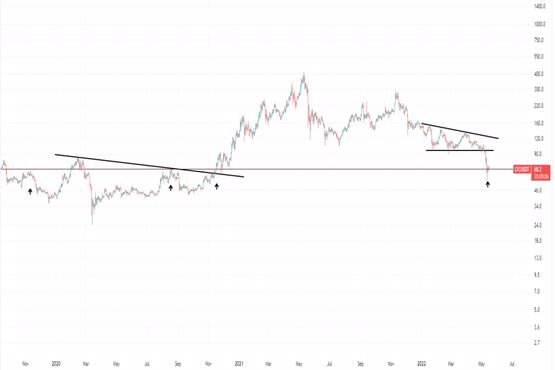 LINK lost a 5,03% value during morning hours and is priced around $7.56. When we consider the LINK/USDT parity technically, the downward trend since November continues and we see that sales have gained momentum since the beginning of the week. In the short term, the sales pressure, which came to the fore as of April, has deepened its sales since last week with the monetary tightening and its investment in secure assets. In the short term, if there is more than $7 support, the next support level of 5.95 can be followed if this level is broken in the parity, which we think that purchase reactions can appear. 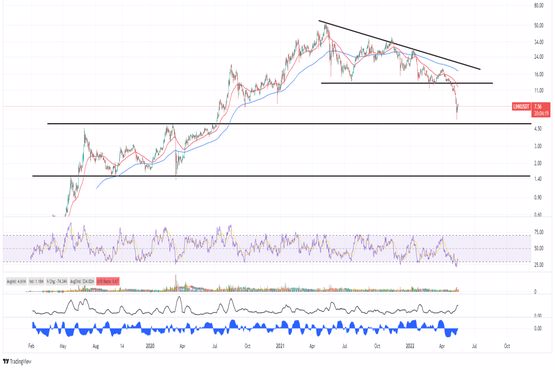 BAT lost a 6,46% value during morning hours, and is priced around $0.4111. We see that the downtrend that appeared as of the beginning of April continues. We see that the level of 0.45, which is the dip level in July, is broken downwards. If it manages to stay above 0.45 USD, we think that purchase reactions may appear. 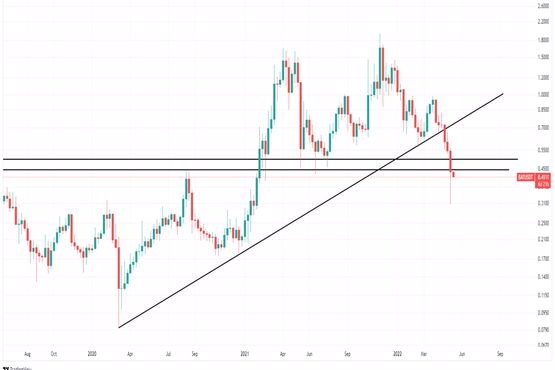