Turkish Minister of Treasury and Finance Makes Explanations About Cryptocurrencies

Nobel prize-winning economist Robert Shiller has stated that he has never bought Bitcoin and maybe he should be active in that market.

HSBC CEO Noel Quinn has stated that they do not have an agenda to provide cryptocurrency trading or offer any investment package to investors, citing the volatility experienced in bitcoin and cryptocurrencies.

US-based BTC mining company Marathon Digital Holdings has announced that they plan to achieve 70% carbon neutralization in the Q1 of 2022 and they want to increase this rate to 100% in the long term.

A Singapore cryptocurrency exchange has announced that all user accounts registered with a Chinese phone number will be closed as of June 15.

Scott Kupor's Call to SEC and Congress for Regulation

Venture capital company Andreessen Horowitz's (A16Z) Managing Partner Scott Kupor has stated that the SEC has so far only sanctioned bad elements in the cryptocurrency and blockchain industry and invited the SEC and the Congress to collaborate to introduce a regulation.

The South African Central Bank has announced that they will conduct a new feasibility study to examine the pros and cons of having their own digital currency.

The Indonesian Central Bank has stated that they are planning to issue their own digital currencies in order to increase the speed of payment transactions and that the digital rupee will become a legal payment instrument.

The Stellar Development Foundation (SDF) has announced that it has made a $ 15 million investment in AIRTM which is a digital wallet and peer-to-peer exchange platform based in Mexico.

$ 125 Million Fund Statement from 1confirmation
Crypto-focused venture capital firm 1confirmation has stated that it has bought a new fund of $ 125 million and will use this fund to invest in startups in the cryptocurrency and NFT field.

Governor of the Bank of England Andrew Bailey has called for regulation once again after stating that the growing popularity of cryptocurrencies across the country is dangerous.

Bitcoin is experiencing positive pricing around 2.5% this morning, just behind the $ 40K level. Last week's negative news flow stopped in BTC, which fell to the level of 30 thousand dollars. Moreover, after Goldman Sachs included it in the asset class, they offered their investors a more affordable BTC service compared to the previous weeks. We see some metrics that show that these regions are bottom levels. After China's decision on miners, sales in the Chinese miner pool started to stop at these levels. The recovery of Grayscale premiums may soon bring new institutional investors to this region, as ARK Investment has purchased a new $ 20 million BTC. The continuous increase in funding rates in Bitcoin has drawn us a good support in the $ 36-37,000 region.

When we consider BTC / USDT technically, we follow a horizontal course between 37,200 and 40,600, corresponding to weekly and monthly averages. With the closing of the gap between the averages, it confirms the price recovery. Although there was some retracement yesterday, BTC, holding on to the Bollinger midband daily, is expected to have a $ 42,400 response. We can state that the risk appetite continues in the market and if the 40,000 and 40,600 $ levels are exceeded during the day, the reaction may continue in the $ 2,000 band. Progress is towards recovery. 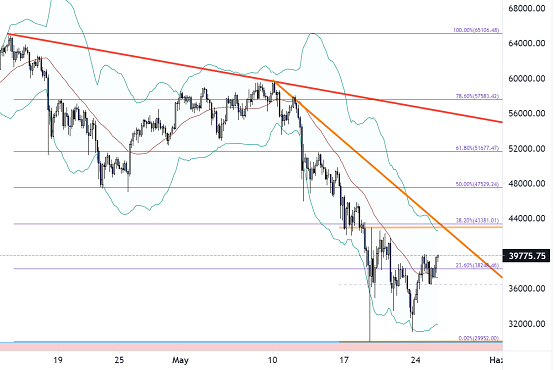 Ethereum is priced around $ 2,830 this morning, with a return of close to 5%. ETH is showing signs of recovery, and the recovery after the hard sales in the general cryptocurrency market is also fast. However, although we do not see a recovery in the number of active and new accounts, the funding rates are also relatively low compared to Bitcoin.

When we consider ETH / USDT technically, there is a descending trend that exists since the $ 4,300 level after the break of two minor downward trends. Although it is still on the rising side in the major trend, this trend, which consists of $ 4,370, appears as a secondary trend. With yesterday's new record blue minor trend and minor Fibo retracement levels, retreats could occur to the $ 2,740 and $ 2,650 zones. Another technical example of the strong recovery of ETH in the major trend was the break of the $ 2,740 level, which corresponds to the Fibo'50 slice. Therefore, the important level we will follow throughout the day will be $ 2,740. This is a key Fibo retracement level in both the major trend and the minor trend. 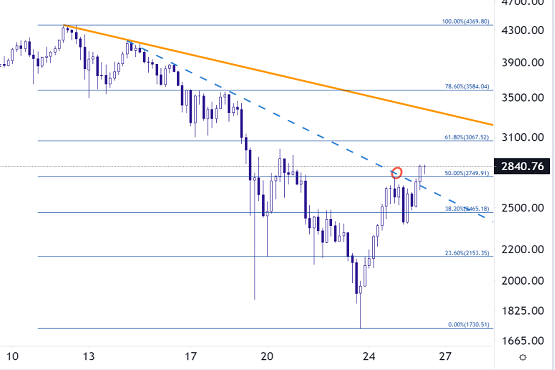 When we examine the AVAX / USDT parity in a 4-hour period, we see that the momentum and the MACD have broken their falling trends upwards. AVAX, which has been priced just below this level for the last 2 days with the resistance it has seen at $ 19.8, which corresponds to the Fibo'100 slice, has broken this resistance upwards today. On the other hand, we expect the upward movements to accelerate in AVAX, which has exceeded its downward trend. The next short-term target is the Fibo'78.6 zone at $ 23.4. We expect $ 19.8 to work as a strong support in pullbacks. 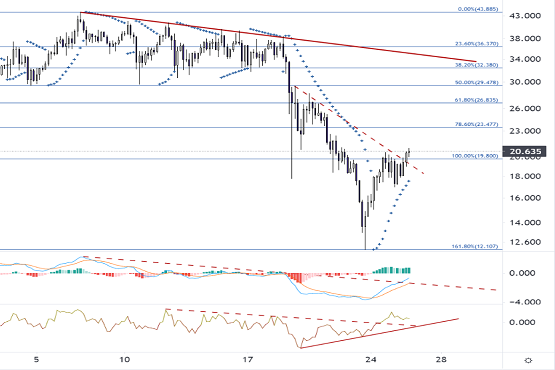 Ripple, which rose 6% in the morning hours, is priced at $ 1.03 levels. The SEC had previously cited missing documents and the Ripple founder and principal employees interfering with business activities and the XRP price, and submitted their requests.Yesterday, Ripple wrote a defense letter to these allegations and made statements about its senior employees and stated that XRP prices are like every coin in the market and that they act according to the market, stating that this accusation does not comply with the "fair evaluation" requirement. While the SEC's request for additional documents was interpreted as not finding anything to strengthen their claims in the documents in their possession, it was positively evaluated that the XRP transactions announced by Ripple were market-based.

When we consider the XRP / USDT pair technically, we see that it is priced at $ 1.03 levels above its two-week average. With XRP up 60 percent since the bottom, we see the most important support point at $ 0.9920. With the recovery in the market, we see that the resistance level of $ 1.06, which corresponds to the Fibo'127.20 retracement level for XRP, and we predict that if this resistance is broken, the move towards the $ 1.20 levels will accelerate. The outlook is in the direction of recovery. 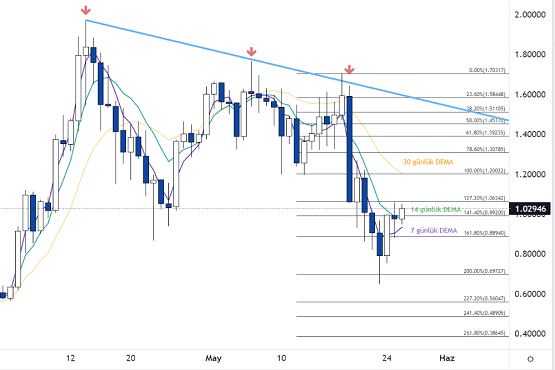 Litecoin is pricing around $ 191 this morning, gaining about 4% in value. We see that the recovery that prevailed yesterday in the markets continues today. When we look at the chain data for LTC, which continues its upward movement with this recovery, we see that the number of new addresses is moving in the direction of increase again. While this increase in the number of addresses shows the interest of new investors in LTC, the reserve risk metric shows that the current prices of LTC are positive for long-term investors in low levels and in the green zone. On the institutional investors side, when we check the investments of Grayscale in the last 24 hours, we see that it only made LTC purchases.

When we consider LTC / USDT technically, it gained 62% value with the recovery it experienced from the bottom level it saw on May 23 yesterday, which is $ 117. We see that the $ 168 we mentioned yesterday is working as a strong support. When we examine it in a 1-hour period, we see that the LTC, which formed the Reverse Shoulder Head and Shoulder formation, broke the $ 185 where the neckline was located. If the uptrend continues and the $ 235 level corresponding to the falling trend shown on the chart is broken, we think that there will be an increase towards the formation target of $ 280-290. 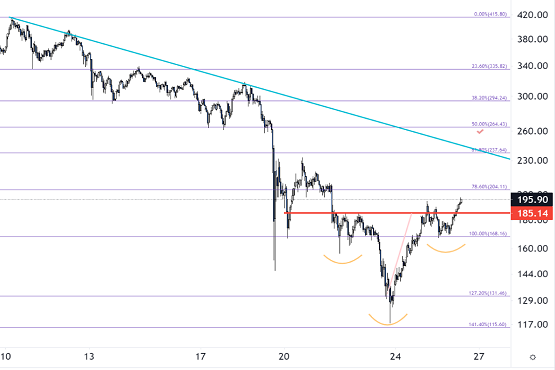 LINK is pricing around $ 30 this morning, gaining nearly 9% in value. In keeping with the recovery movement in the market, LINK rose 100% from the low of $ 15.00 on May 23. When we look at the chain data in LINK, which is experiencing rapid increases compared to the market, the rapid increase in the number of active and new addresses supports this rise in LINK.

When we consider LINK / USDT technically, LINK started its bullish movement with the support it received from the $ 17.30 levels corresponding to the Fibo'61.8 slice on May 23, with the effect of the recovery in the market, it is priced above $ 26.50, Fibo'38.2 slice corresponding to Fibo'38.2 slice. We see that in the hourly period, reverse Shoulder Head and Shoulder formation is formed and the neckline is at the level of $ 26.5. The range of $ 45-48 can be targeted as a TOBO target. Before the TOBO target, key resistance levels should be followed at $ 34.45, the Fibo'23.6 zone, and the $ 37-38 band, which corresponds to the falling trend. In retreats, we see the neckline as support. Considering the general condition of the market, we read the general view positively for LINK. 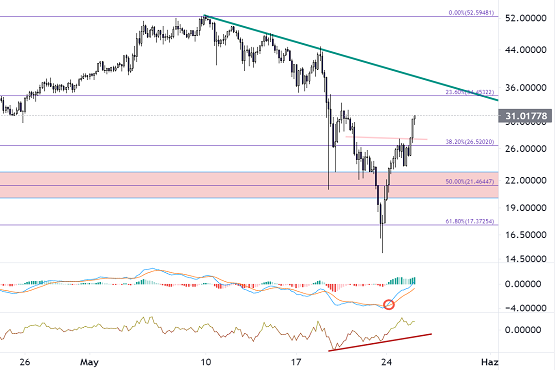 Basic Attention Token is priced around $ 0.80 this morning, with an approximately 9% appreciation in value. It is about 80 percent above the May 23 low of $ 0.45.

When we consider the BAT / USDT parity technically, it started to be priced within the falling channel that has been formed as of April 10. BAT, which returned in the channel yesterday with the reactions it received from the sag area, seems to have exceeded the $ 0.76 level, which is the Fibo'61.8 slice. For BAT, which also breaks the upward trend in momentum in the daily period, the next target is the channel mid-band and the $ 0.94 level, which corresponds to the Fibo'50 slice. In possible pullbacks, the $ 0.76 level is read as an important support level. 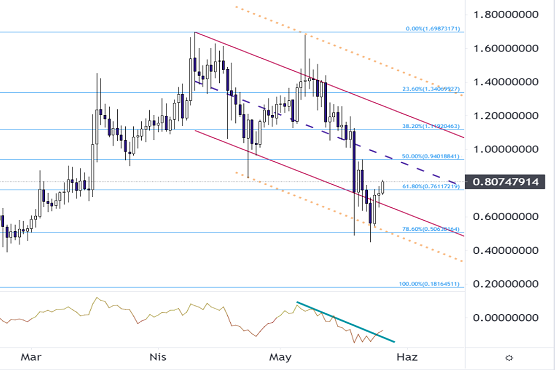