A panel of cryptocurrency experts predicted that the Bitcoin price would rise to $318,417 by December 2025.

US Treasury Secretary to Meet Various Officials About Stablecoins

U.S. Treasury Secretary Yellen will meet today with the Financial Markets Working Group, the Office of the Currency Registrar and the FDIC to discuss the role of stablecoins in the financial system.

New Move from El Salvador
It is said that the new step of El Salvador, the first country to legalize the use of Bitcoin, is to produce its own stablecoins, while it is stated that this stablecoin will be indexed to the US dollar.

The CEO of decentralized finance (DeFi) project Aave stated that an alternative application to Twitter will be created that will work on the Ethereum network.

Russia Wants To Attract Chinese Miners To Its Country
Russian Association for Cryptoeconomics, Artificial Intelligence and Blockchain; will launch an initiative aimed at transferring global computing resources to the Russian Federation for cryptocurrency mining.

Bitcoin, which moves sideways in the morning hours, is priced at $ 31,727. When we analyze the Bitcoin chain data, there are approximately $23 million worth of Bitcoin outflows from the stock markets yesterday, but the fact that there is a Bitcoin inflow of $ 724 million on a weekly basis supports the decline we experienced last week. The fact that the exits on the Tether side have been going on for a while with 104 million exits may indicate that investors are willing to return to cash. Tether will need to enter the market to see sustained rise in the short term.

When we consider the BTC/USDT parity technically, we can say that it has been priced in the descending channel that has been continuing since June 29 in the 4-hour period and is traded just above the lower band of the horizontal channel that has been continuing since May. $31,800-31,900 is the descending channel middle band and could act as the closest resistance level on the upside move. With an upside break from these levels, price action could accelerate towards the $33,500 levels. The closest support level to follow for possible pullbacks would be $31,080, which coincides with the horizontal channel lower band. In the short term, buying near support and selling near resistance may be a more appropriate strategy. 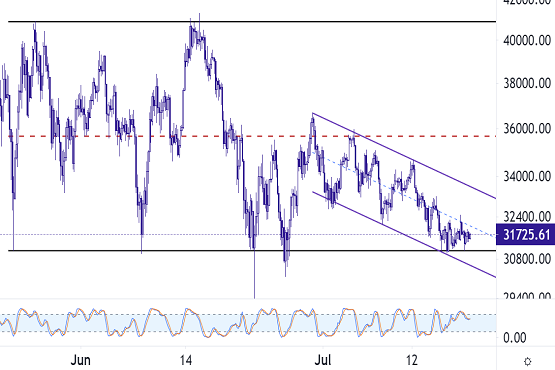 Ethereum, which moves sideways in the morning, is priced at $ 1896. When we examine the chain data for Ethereum, we see that the circulating supply has decreased to minimum levels, but we have not yet seen a significant recovery in the 7-day average of the number of new and active addresses. Like all markets, the cryptocurrency market has also been affected by the data announced in the macro economy. With the renewed interest of investors in the market, we think that we will see the positive effect of the already reduced ETH supply on the price in the medium and long term.

When we examine the ETH/USDT parity technically in a 1-hour period, there is a descending channel formation as of July 7th. ETH, which continues its price movement within the descending channel, received a reaction from the 1996 dollar level, which coincided with the upper band of the channel yesterday. With the sell signal coming from the stochastic in the same period, ETH, which saw an acceleration in the downward price movement, declined to the important support level of $ 1865. Although stochastic has given a buy signal from the oversold zone, there is no upside recovery in the price yet. If the $1865 level is retested and broken to the downside, a pullback towards the channel middle band of $1800 can be seen. 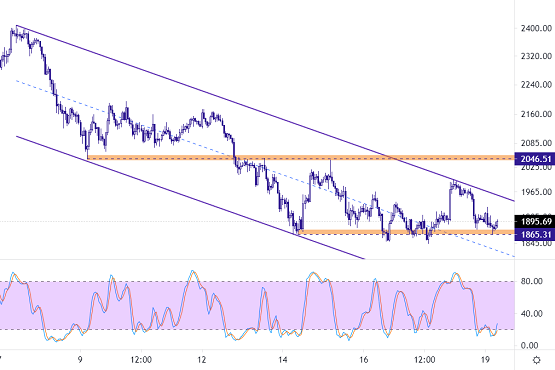 AVAX, which lost approximately 0.75 percent in the morning hours, is priced at $ 10.60. When we consider the AVAX/USDT parity technically in the 1-hour period, AVAX, which continues its price movement within the existing descending channel as of July 7, has been priced close to the upper band of the channel for a long time. Although it tested the channel upper band at $11.26 again yesterday, it could not break and there were pullbacks to $10.45 levels. Parabolic SAR and MACD continue to give sell signals in the 1-hour period and we cannot talk about a rebound in price yet. If the long-tested channel upper band for AVAX can be broken, we can talk about rises. As long as the price movement continues within the channel, the $10 levels, which coincide with the channel middle band, are our next closest support level. 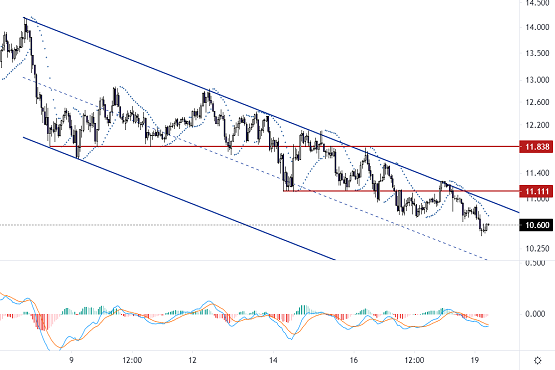 Ripple, which is flat in the morning hours, is priced at $ 0.585. In the latest development in the case, the SEC, which insisted on not taking the testimony of former SEC employee Hinman, received bad news from the judge of the case, Netburn, and this situation, which was seen as a positive decision in favor of Ripple, was priced positively. Former SEC employee Hinman is expected to testify on July 27. It is possible to say that there is a course in favor of Ripple in the case.

When we consider the XRP/USDT parity technically in the 4-hour period, it continues to move within a descending channel. In case of an uptrend, the closest resistance level to follow is $0.589, and if these levels are broken upwards, price action can accelerate towards $0.598, which corresponds to the middle band of the descending channel. The closest support level to follow in pullbacks is $ 0.574, and in the short term, buying near support and selling near resistance will be a healthier strategy. 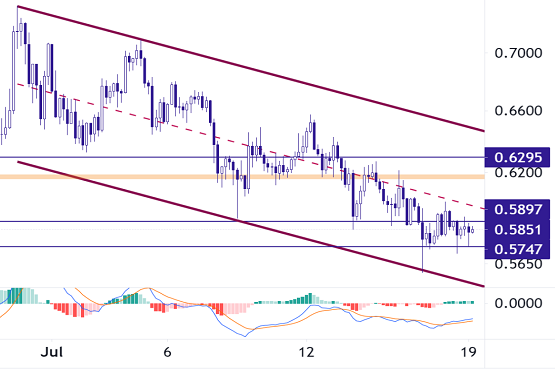 Litecoin, which continues its movement in a horizontal course in the morning hours, is priced at $ 119.31. The MVRV Z-Score for Litecoin for which we analyzed the chain data is -0.35, below 0, indicating a discount to its fair price for Litecoin in the long run. However, we see that the market has been mixed due to the fact that there has been a horizontal course in Bitcoin, which is the flagship of the market, and sometimes the withdrawal movements.

When we consider the LTC/USDT parity technically, it has been moving in a descending trend for about a week since July 12 in the 4-hour period. In case of an upward move, the upside break of the $120.00-120.10 band, which coincides with both the descending trend and the Fibo'61.80 retracement level, will be critical. If it persists above the $120 levels, we expect LTC to move towards the $124-125 band. The closest support level that can be followed in possible retracements is $117. In the short term, buying near support and selling near resistance or making new purchases above $120 levels may be a healthier strategy. The MACD maintains its buy signal in the 4-hour period. 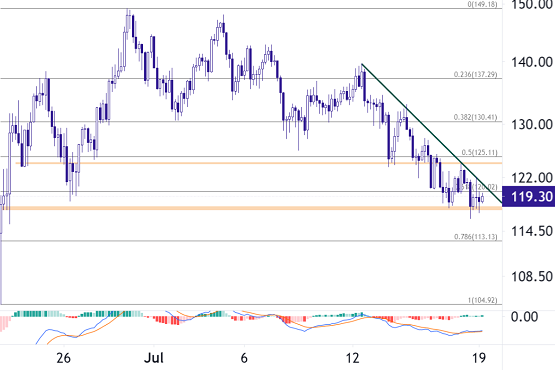 LINK, which is horizontal in the morning hours, is priced at $ 15.43. When we look at the chain data, it is possible to say that the number of active and new addresses belonging to LINK has been decreasing in recent days and investor interest has decreased considerably. When we consider the LINK/USDT parity technically, we see that the weekly average in the daily period cuts the monthly average upwards as of yesterday and creates a signal in the direction of buying. The nearest support level is $15.10, which coincides with the weekly DEMA, and we expect the $16.88 levels to act as the nearest resistance level if the price continues to move up. In the short term, buying near support and selling near resistance can be seen as a healthier strategy. 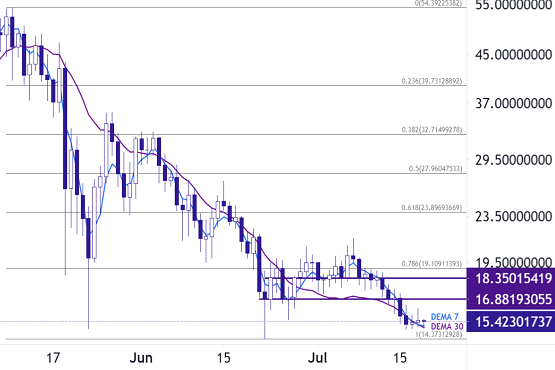 BAT, which depreciated by about 2.3 percent in the morning hours, is priced at $0.5085. When we examined the BAT/USDT parity technically in the 4-hour period, BAT, which tested the channel upper band on July 17, reacted from the $ 0.595 level and experienced retreats to the $ 0.508 levels. In the 4-hour period, the stochastic maintains the sell signal. BAT is priced close to the critical support level of $0.498. If this level is broken to the downside and persistence, a pullback towards the $0.45 level can be seen. The channel upper band for BAT is the important resistance level that must be broken for the ups. The break of this resistance level, which is located at the $0.56 level, will bring upward movements. 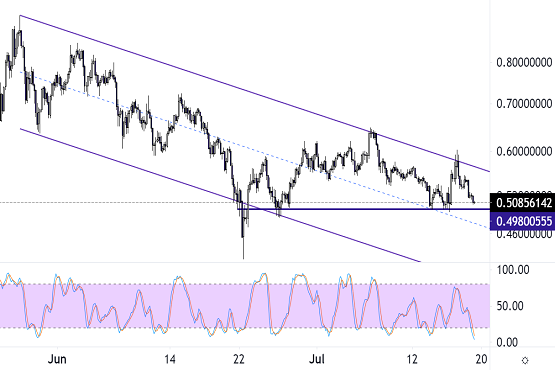