US Bitcoin Miners Expand Their Operations Despite Price Volatility

United States headquartered cryptocurrency mining operations are determined to increase their hashrate with more hardware despite Bitcoin's (BTC) quarterly decline. Marathon Digital Holdings and GEM Mining companies in the US told Cointelegraph this week that they expect the size of their own operations to grow by at least doubling the number of machines in their facility by 2022.

The US Secret Service has launched a cryptocurrency awareness center. The new platform will "include the latest developments in the agency's work to combat the illegal use of digital assets, as well as provide public awareness information on how to ensure digital assets are safe and remain secure."

In light of US President Joe Biden's comments about Russia's invasion of Ukraine, the price of Bitcoin has recently increased by $2500 in an hour. The market panic surrounding the conflict has returned to its price before it happened.

According to crypto analytics firm Santiment, the majority of investors are now opting for short-selling futures, which “could result in liquidations that skyrocketed prices.”

In a recent tweet, Ki Young Ju, CEO of crypto market analytics firm CryptoQuant, weighed in on the subject. He believes that as long as institutions like MicroStrategy continue to buy Bitcoin, the asset's "digital gold" narrative will continue to apply.

Russians Will Be Restricted to Buying $7,700 Worth Bitcoin Per Year In New Proposed Law

Russia will limit the number of cryptocurrencies purchased by citizens in a new bill aimed at regulating digital currencies in the country. The bill, backed by the finance ministry, recognizes Bitcoin and other cryptocurrencies as investment vehicles rather than a payment option, FXStreet reported.

Bitcoin gained a 0,70 % value during morning hours and is priced around $38.742. When we consider the BTC/USDT pair technically, BTC had intense sales pressure last week. And the war tension led to the Bitcoin plunge. After Biden's statements about the sanctions to Russia, Bitcoin closed the day positively and wiped out the intraday loss. BTC, which has not received a clear reversal signal, continued to rise until the $39.000-40.500 band. This resistance zone must be broken to the upside for the ups to be permanent. 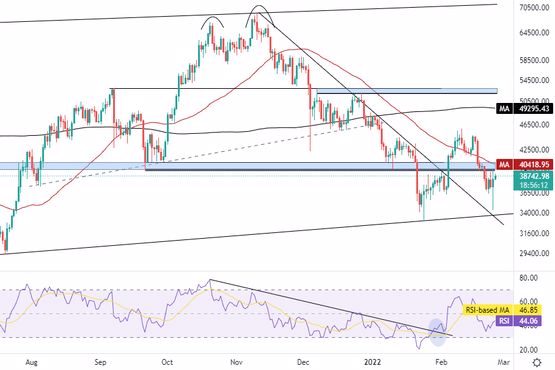 Ethereum gained a 0,20% value during morning hours and is priced around $2602. When we consider the ETH/USDT pair technically, ETH had a positive divergence in the 4-hour RSI, wiped out the intraday loss and closed the day positive. Finding support from the $2280-2400 band, ETH may continue to rise towards the $2850 level. 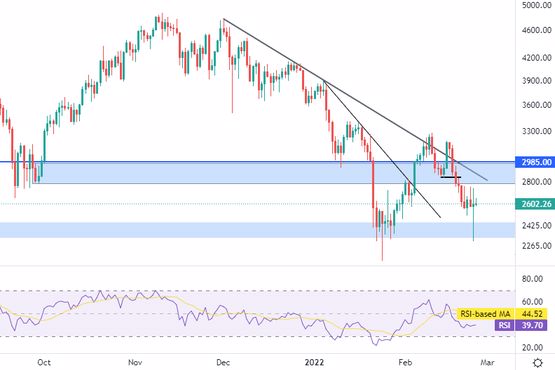 AVAX lost a 6,95% value during morning hours and is priced around $75.51. When we consider the AVAX/USDT pair technically, AVAX wiped out its intraday loss and received a positive outlook, retesting the 50MA level at $79.36 yesterday. In AVAX, which received a short-term reaction from here, the price movement continues below the resistance zone marked in blue. If the 50MA level is broken to the upside, the downtrend will be retested. Otherwise the fall may deepen. 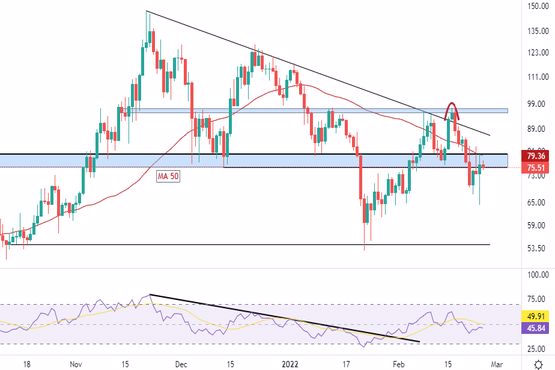 Ripple lost a 1,00% value during morning hours and the current price is $0,7237. When we consider the XRP/USDT pair technically, XRP had a descending triangle and broke the level of $0,75 downwards and sharp sales followed. XRP had plunged but reached the formation target when finding support at $0,633. So it wiped out the intraday loss. For XRP, which is still below the $ 0.7121 zone, pricing above the 50MA level is required for a permanent rise. 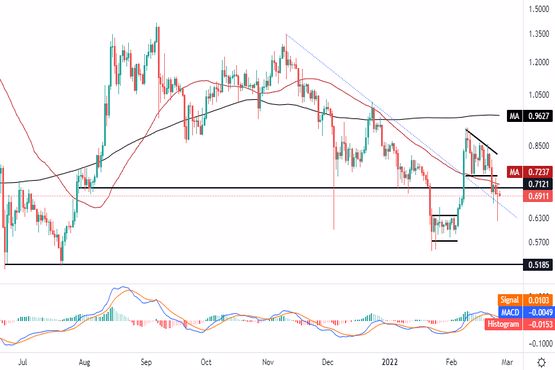 LTC lost a 1,15% value during morning hours and is priced around $103.8. When we consider the LTC/USDT pair technically, LTC, faced resistance from $113.1 broke the support level at $104.9. LTC, which managed to wipe out most of the intraday loss yesterday, still continues its price movement below the $104.9 level. If this level is broken to the upside, there may be a rise towards $113.1 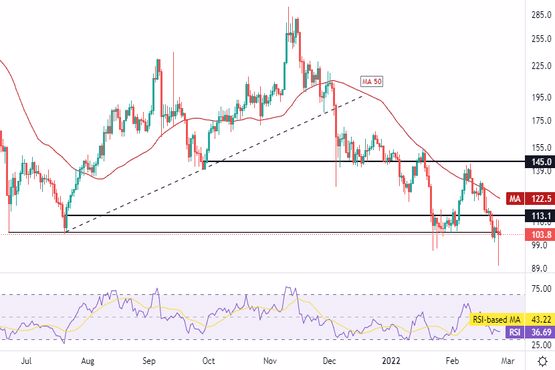 LINK gained a 1,10% value during morning hours and is priced around $13.23. When we consider the LINK/USDT pair technically, the weekly channel lower line, which has been in existence since July 27, 2020, has also been broken down. LINK has a head-and-shoulders formation in the daily chart and rose towards the neckline ($15.16) but a formation target has never occurred. As we mentioned in our newsletter yesterday, the price movement fell to the $11.50 zone. But then a rise occurred in LINK, which ended its formation target. For LINK, which has not yet received a clear reversal signal, it is better to follow the majors. 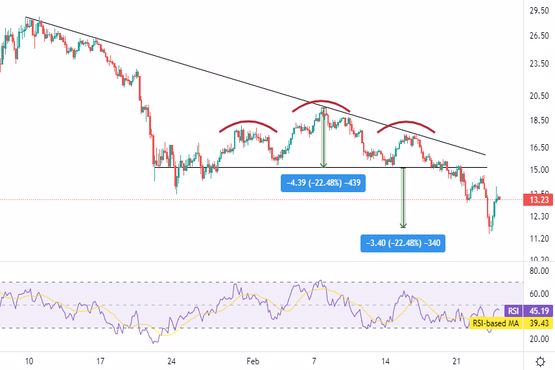 BAT gained a 0,20% value during morning hours and is priced around $0.6647. When we consider the BAT/USDT pair technically, BAT has repeatedly tested the uptrend that has existed since June 2021 and broke it down again. The sales pressure followed. For BAT, which we are talking about head-and-shoulders formation, it has been confirmed and at the same time, there has been a fall to our short-term price target, the support zone marked in blue. BAT had dropped this zone downwards in intraday pricing yesterday but could hold onto the blue zone on the daily close. For now, the short-term risks are gone. But if the momentum is lost, a sharp fall might follow. 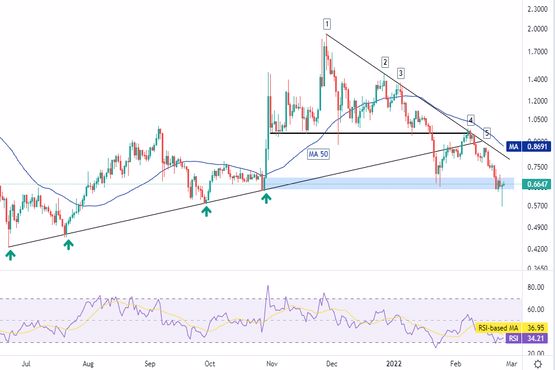