In an unprecedented move, the United States announced that all assets of the Central Bank of Russia in the United States, including gold and others held by US individuals and organizations, have become inaccessible.

Crypto donations are pouring into Ukraine after Russia's attack on the country. The crypto community has raised over $29 million in digital assets through various funding initiatives.

South Korea will spend at least $186.7 million to create the metaverse ecosystem, according to the country's Ministry of Science, Information and Communication Technologies.

Data shared by Glassnode shows that small-sized investors are actively purchasing Ethereum, the second-largest cryptocurrency in the market, while 7.6 million ETH, which was last active in 2015-2017, remained unsold.

According to Street reports, e-commerce platform eBay said it is considering the adoption of crypto payments to attract generation Z and millennials users. An announcement could be made on March 10, eBay's investor day.

Cryptocurrency spread to countries in Europe as people sought ways to protect their money from war-torn nations. Data from cryptocurrency monitoring site Kaiko shows that volumes from the ruble and Ukrainian hryvnia to crypto have skyrocketed in recent days, hitting their highest levels in several months.

Bitcoin gained a 0,40% value during morning hours and is priced around $43.270. According to Street reports, e-commerce platform eBay said it is considering the adoption of crypto payments to attract generation Z and millennials users. An announcement could be made on March 10, eBay's investor day.

When we consider the BTC/USDT pair technically, BTC quickly recovered well from the $34,000 level but dropped at the weekend. There have been sharp rises in BTC, which has a positive news flow. Breaking the resistance zone in the 39.000-40.500 band and the descending trend upwards, a return of about 15 percent was obtained yesterday in BTC. With the buy signal coming from the DEMA 7-14 intersection, we expect the rises in BTC to continue in the coming period. The closest resistance level is the 44,700-45,000 region. 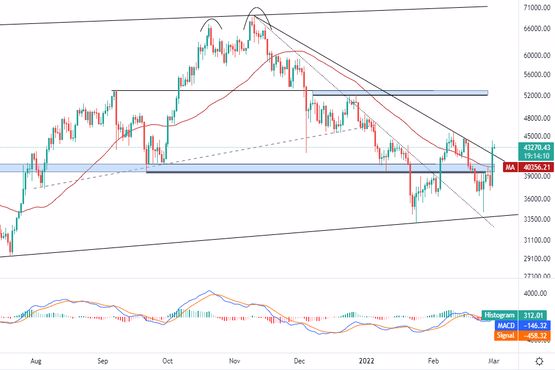 Ethereum lost a 0,10% value during morning hours and is priced around $2914. Data shared by Glassnode shows that small-sized investors are actively purchasing Ethereum, the second-largest cryptocurrency in the market, while 7.6 million ETH, which was last active in 2015-2017, remained unsold.

When we consider the ETH/USDT pair technically, ETH, which had retreated to $2300, could not break the short-term resistance level at $2810-2836. In ETH, which experienced a volume-free pullback at the weekend, short-term resistance, 50-day moving average, was broken upwards. In ETH, which has reactions from the resistance level of the short-term descending trend, it is expected that the upward price movement will continue with the breakout of this zone. When retreating, the first support level to follow is $2830. 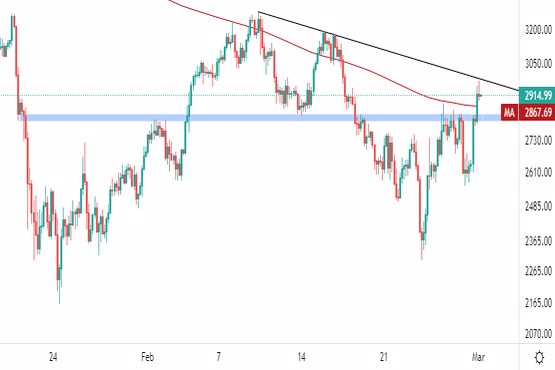 AVAX gained a 3,90% value during morning hours and is priced around $87,23. When we consider the AVAX/USDT pair technically, AVAX, which is holding onto the support zone marked in blue despite the pullbacks on Sunday, broke both its 50MA and its major descending trend, which it has tested many times, with yesterday's upward movement. As of the daily close, we expect the rises to continue towards the $95 level for AVAX, which has a bullish engulfing candle formation. 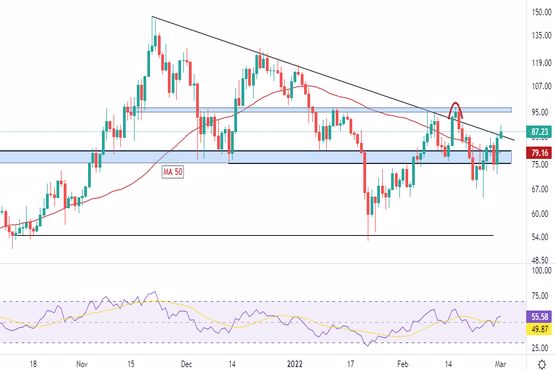 Ripple lost 0,60% value during morning hours and the current price is $0,7752. When we consider the XRP/USDT pair technically, XRP had a descending triangle and reached the formation target last week. It gave most of its loss back when slightly rising. As we mentioned in our daily bulletin yesterday, the short-term descending trend in XRP, which holds onto the support level at $0.7121, has not been broken yet, despite the sharp price action in BTC. If the level of $0.7920 is broken to the upside, the level of $0.9587 (200MA) can be targeted. 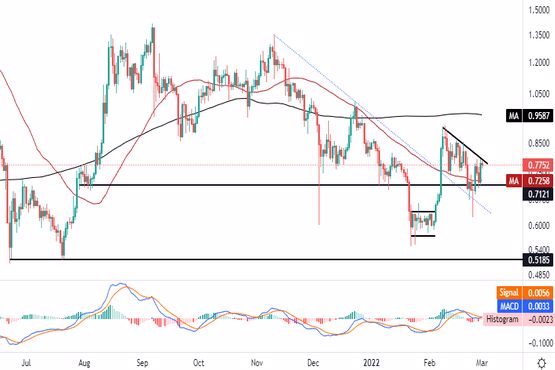 LTC lost a 0,60% value during morning hours and is priced around $112.9. When we consider the LTC/USDT pair technically, LTC retested the $113.1 resistance level on Saturday. After facing resistance from this level, it broke the support level at $104.9. With the positive trend throughout the market, price movement continues under the major descending trend in LTC, which broke the resistances at both $104.9 and $ 113.1 upwards. If the $121 level, which corresponds to the downtrend and its 50MA, is broken to the upside, there may be a rise towards the $145 level. 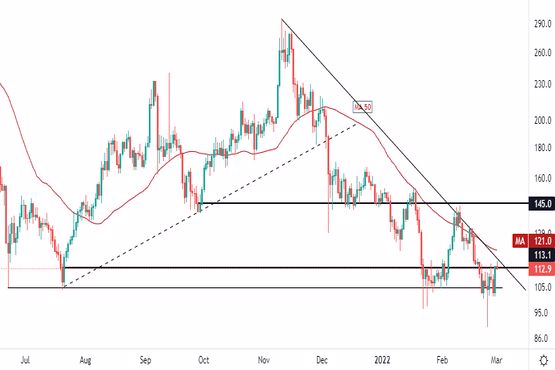 LINK lost a 0,40% value during morning hours and is priced around $15,02. When we consider the LINK/USDT pair technically, the weekly channel lower line, which has been in existence since July 27, 2020, has also been broken down. With the rise led by BTC yesterday, there was a rise towards the neckline of the formation, which is $ 15.16, and the major descending trend was broken to upside. If it can hold above the $15.16 level, persistent price movements can be seen in the bullish direction. 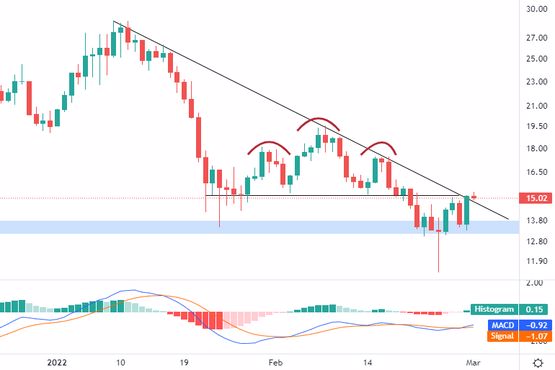 BAT gained a 0,90% value during morning hours and is priced around $0.744. When we consider the BAT/USDT pair technically, BAT continues price action below the downtrend on November 28. It rose again after demand close to the support zone marked in blue. For BAT, which still continues its price action under the major descending trend, a daily close above the $0.756 level must be experienced in order to catch the expected momentum in the upward direction. 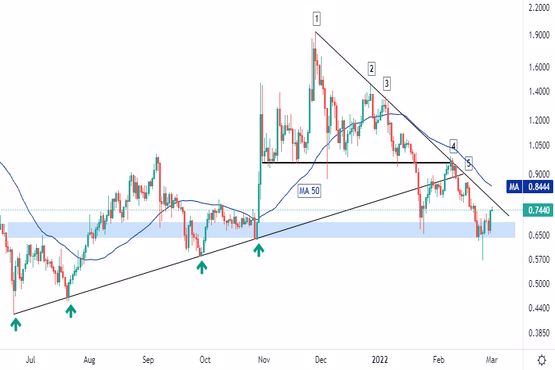