The U.S. House of Representatives has passed a bill that, if signed by the Senate and President Biden, will make the rules clearer for cryptocurrencies classified as securities or commodities. The law in question will be prepared by the joint efforts of the SEC and CTFC.


A New Discovery Conference Scheduled between Ripple and the SEC
Defense lawyer James Filan has announced the next telephone conference date on his Twitter account. The conference which will take place on April 30, will be about the documents requested by the SEC from institutional regulators outside the US. The conference will be open to the public

JP Morgan Comments on Bitcoin
According to the latest report published by the strategists of the US investment bank JPMorgan, it is stated that $60 thousand level is a crossroad for Bitcoin. The report also highlights the recent decline in the institutional purchases.

Institutional Interest in XRP Increases
According to the CoinShares report, institutional investors purchased $33 million worth of XRP last week, allocating almost twice the usual XRP budget. Thus, institutional interest concentrated on the XRP side was supported by reports.

Scott Minerd Predicts a Short Term Decline
Scott Minerd, one of the Guggenheim partners, has stated that Bitcoin could see a sharp correction in the near term. Predicting a 50% drop, Minerd argued that BTC could be priced between $20,000 and $30,000.

South African wealth management firm Sygnia is set to apply to the Johannesburg Stock Exchange to list a new cryptocurrency exchange traded fund (ETF). The company, whose previous application was rejected, has stated that they are conducting a more comprehensive study this time.

Bitcoin is trading with 2% buyers this morning at $54,700. In this view where bottom buyers come, we stated yesterday that according to Santiment analysis, millionaire BTC accounts are buying or collecting Bitcoin during this decline. In addition, the prices collected from the zone of 51 thousand dollars create a horizontal channel up to the level of 57 thousand dollars above, as a result of the price, we examine the calming of volatility and the Puell Multiplier (daily issue/365 MA). The multiplier says that there is no shortage on the supply side yet, and the market equilibrium must outweigh the demand side for the uptrend to begin.

When we consider BTC/USD technically, the ADX indicator has risen above 25 and confirms the presence of the trend. After the 51 thousand dollar level was seen, momentum started to give the same bullish reaction. Earlier in the week, we started receiving more signals confirming the view that these levels are bottom. Today the outlook is active, the course is positive 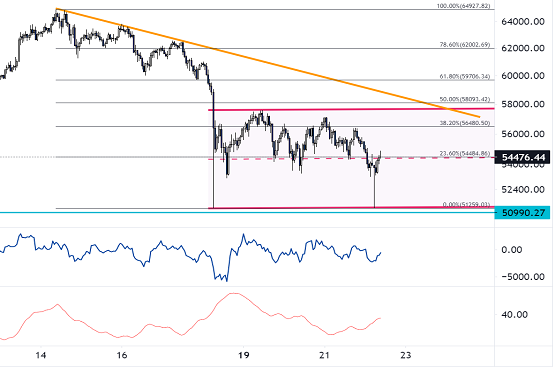 Ethereum is approaching $2,500 from $2,230 with the attack it made yesterday, and its dominance has increased to 14%. While this rate is much higher than the strong altcoin season in May-September, putting aside the ERC20 network fees, it shows that Ethereum has not recovered enough and has a story to make a premium yet.

When we consider the ETH/USD parity technically, after yesterday's bullish reaction, the minor trend has ended and it has moved towards record levels on the bullish channel. We see momentum and MACD accompany it, and technique and foundation support the trend. The $2,500 level will be our daily resistance. The midpoint of the bullish channel also passes through the $2,870-2,900 zone. 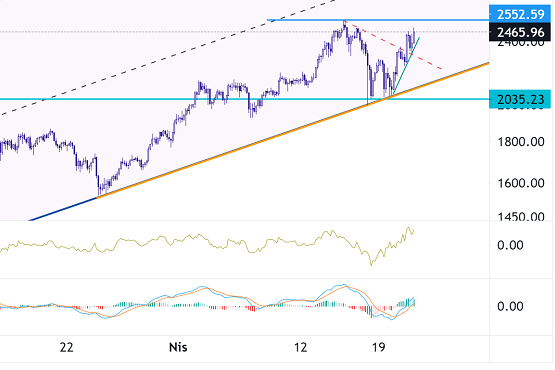 The AVAX/USD parity is pricing around $26.30 this morning, up 1.7% daily. Since the prices above $25.00 intermediate support have not yet recovered from the downward trend, the course continues to remain in the decreasing trend zone. $24.00 is the main support zone in pullbacks, while candle closes above the $28.00 downtrend are necessary to start a new bullish move. While oscillators are not synchronized in the hourly period and give unstable and horizontally weighted signals, we cannot get a synchronous and stable rising start in the 4 hour period for now. However, with the recovery of Bitcoin, it can gain momentum to get back what it lost. 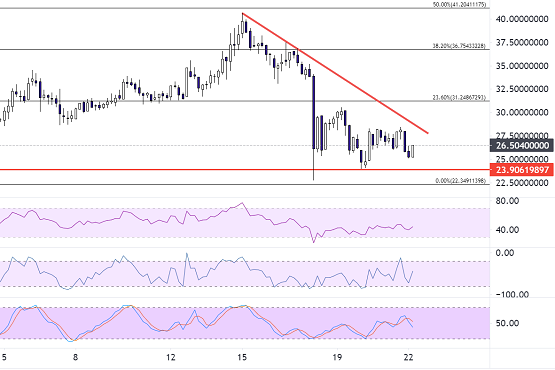 The XRP/USD parity is up 3.5% this morning at around $1.33. In the ongoing lawsuit between Ripple and SEC, the teleconference to be held on April 30 will focus on the documents requested by the SEC from foreign institutions. Earlier, strong purchases were accompanied by XRP when the SEC's request, which wanted to access the financial records of Ripple partners, was rejected. Since the conference to be held on April 30th is open to the public, the positive process for Ripple may support XRP pricing.

If the XRP/USD parity is technically handled, although the parity has not yet recovered from the downtrend, it is holding on to the trend. As the $1.15 support is the previous reaction zone of the parity, the intensified buying appetite here may give the parity a new chance for a trend break. Although the oscillators are turning from the bottom on the hourly chart, the 4-hour period does not signal a strong break. While the $1.33 level is the Fibo'23.60 slice, it is also the place where the downtrend is passing, so the candlestick closings will be based on this price level. 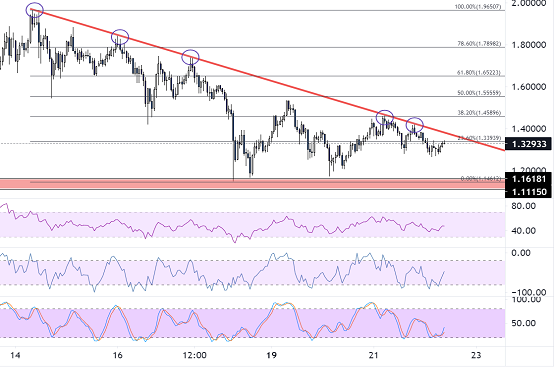 Litecoin is above the $265 level, up close to 3% this morning. Litecoin, one of the cryptocurrencies with the highest correlation with Bitcoin, continues to differentiate itself positively from Bitcoin, with a monthly performance of 41%, benefiting from the increasing altcoin dominance with Ethereum.

If the LTC/USD parity is technically examined, pricing around $265 is consolidating between the Fibonacci last correction of $250 and the mid-band of the bullish channel at $290. In the daily period, the MACD histograms are rising in the positive area, while the maturity lines are in the recovery phase. With the bullish break of $277 and then $290, if the parity can throw itself into the mid-upper zone of the channel, the reaction may be strengthened. The look is positive but the course is calm. 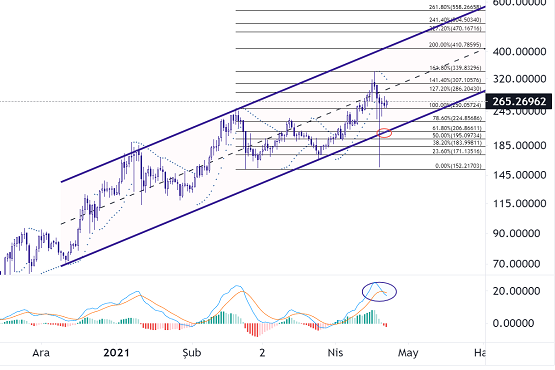 The LINK/USD parity is pricing in the $37.30 zone, up 2.6% this morning. According to a new report published by a global cryptocurrency exchange, 63% of US adults are attracted to cryptocurrencies. Chainlink, a decentralized oracle platform, has gained an essential place among major cryptocurrencies with its 8% awareness. While XRP is known by 6%, cryptocurrencies such as ADA and DOT are known at 2%. When looking at Chainlink's return table, it shows that Ethereum is 10 points ahead of LINK on the basis of monthly returns. For Chainlink, which has managed to become the largest ETH Token with its market value, the difference in the yield spread is read positive.

Technically speaking, the LINK/USD parity is the main pressure level of $37.00 for pricing that is on the verge of breaking with the triangle squeeze, while the triangle sub-support around $34.00 is located near the current price. While the MACD indicator shows the maturity intersection, which gives a sell signal in the daily period, it confirms possible withdrawals in the short term. The triangular target is very close to our $60.00 target in the medium term. 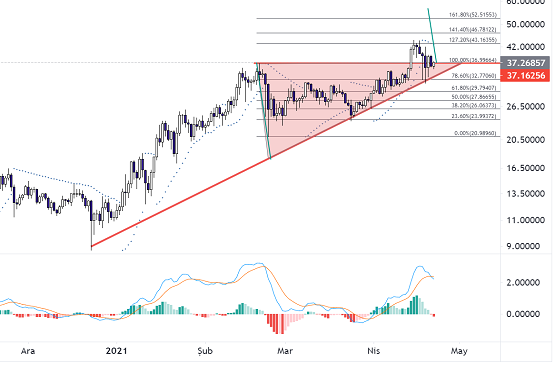 The BAT/USD parity is pricing around $1.22 this morning with a horizontal change. The horizontal movement is maintained between the $1.16 support and the $1.39 resistance, while the Fibo is the first resistance for the $1.24 parity in the 61.80 zone. Support for the $1.39 zone with an upside breakout could positively affect the trend for BAT. Analyzed in a 3-hour period, oscillators in the parity started to give a bullish signal, confirming the reaction buying at the $1.16 support.

At the same time, the BAT/USD holds the $1.17 level, which corresponds to the Fibo'50 zone, indicating that the outlook will continue. Considering this situation, as long as 1.17 does not fall behind, it will be open to reactions. The view is close to horizontal but is in an upward trend. 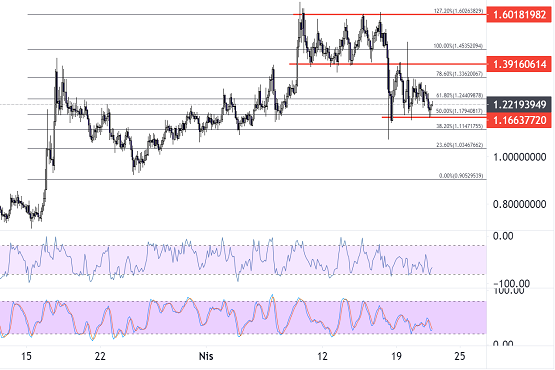