Venmo, affiliated with PayPal, has announced that it will provide cryptocurrency trading services to its users. Announcing that it will bring crypto money service to Venmo last year, PayPal has stated that the transactions are starting as of today and the minimum transaction amount will be $1.

Yilham's Comments on the Decline in Bitcoin Hashrate

The vice president of global business development at Asian mining and wallet company Bixin, Mustafa Yilham has stated that the situation in China's Sichuan province left 80% of the country's BTC mining systems inoperable. Yilham has also added that the hashrate of Bitcoin fell between 20% and 25% due to the intensified mining activities in Sichuan.

Facebook-backed Diem aims to launch pilots in 2021 as a stablecoin fixed to the US dollar. The negations with Swiss financial regulators to secure the payment license continues for the project which is formerly known as Libra.

According to a job posting on a recruitment site, the US banking giant JP Morgan wants to hire blockchain software engineers. JPMorgan is on its way to developing robust blockchain-based solutions and protocols.

The Grand National Assembly of Turkey Department of Research Services has issued a comprehensive report. In the report titled “Digital, Virtual and Cryptocurrency Systems” issued on April 16, 2021 it is stated that Bitcoin may take the place of traditional payment instruments over time and Turkey may generate income from the Bitcoin market.

World-renowned real estate company and workspace provider WeWork has announced that it will accept cryptocurrency payments. Stating that it is open to innovative technologies, the company has also added that it will keep the Bitcoins it received on its balance sheet.

Bitcoin is trading this morning, down 1.6% at $55,600. While the market lacked the general risk appetite, yesterday's losses worried many, according to Santiment analysis, millionaire BTC accounts bought or collected Bitcoin in this decline. Yesterday, we talked about the fact that liquid and whale accounts also increase Bitcoin assets and the amount of BTC withdrawn from exchanges. Therefore, although there are no strong signals that the course is over in Bitcoin, the outlook is still more technically positive.

When we consider BTC/USD technically, the upward channel that has been formed since October continues even though the level of 51 thousand dollars is tested. Since the hold in this zone confirms our upward trend, we are not talking about trend transformation without breaking this zone. The outlook is weak in the daily period. However, as long as the hold on the support continues, there may be reaction movements. The $55,000 level is our resistance zone in this sense. The view is weak, the course is horizontal. 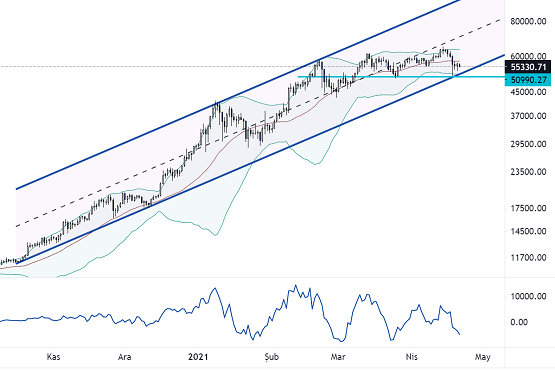 Ethereum rose 16% from the $2,043 level yesterday to $2,360 levels. The wave experienced by the strong market movement and leverage the previous day caused a loss of risk appetite throughout the market. ERC-20 network transfer fees are still much higher. After the Berlin hard fork, we find Ethereum discounted even at these prices as a result of the halving of the ETH 2.0 path, although no significant contribution is seen for now.

When we consider the ETH/USD parity technically, short-term pressures and minor descending trends continue. Nevertheless, the lower band of the rising channel formed in the medium term is above $2,050, and if this support is broken, we can talk about $1,930. However, as we have reached the main support level, it will be important that possible responses do not go above $2,360. Because we will get rid of the short-term descending trend and the sales pressure. 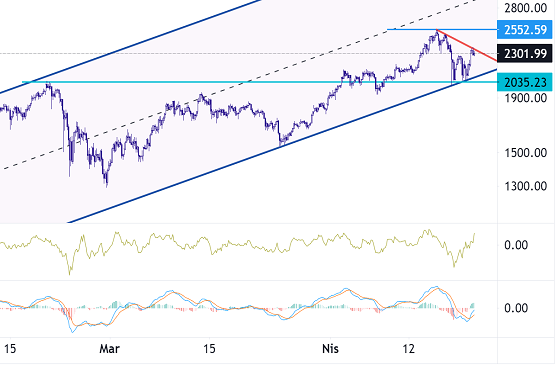 AVAX is pricing at $27.50 this morning, with a horizontal increase. With its previous reactions, the $24.00 support zone approved by the parity brought a 17% increase, allowing it to record prices above $28.00. However, the current response remains insufficient to confirm that the course has turned positive, and selling pressures continue to accumulate the parity. Closes above the $30.00 trend level should be expected to keep the minor downtrend behind. Then, even though the $31.25 resistance over the Fibo'23.60 slice may create weaknesses for pricing, buyers can dominate the price candles as they support these zones. Although the outlook is flat for now, it tends to recover. 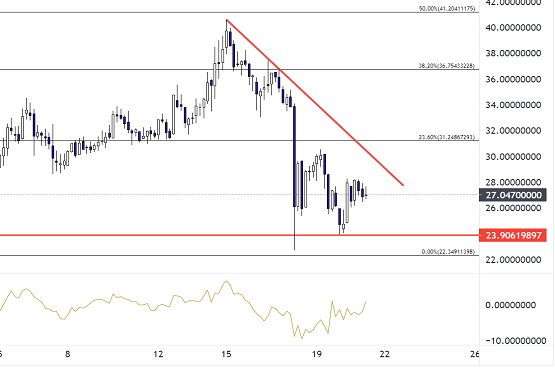 The XRP/USD parity is positively diverging from the market this morning, rising 2% around $1.41. After the investor's request to intervene in the case between Ripple and SEC was accepted, the investors filed their defense to the court. In the defense, it was emphasized that XRP is not accepted as a security by many countries and that XRP is a bridge between the two central banks. Thus, it was noteworthy that investors were defending in favor of XRP, apart from disclosing their grievances. At the same time, developments in the XRP Ledger and the increase in institutional buyers are among the developments in favor of Ripple.

If the XRP/USD parity is technically considered, after the $1.97 local peak, the parity has not been able to break the trend, accompanied by a downtrend. The candlesticks above the $1.45 trend level in the hourly period should be expected. The situation on the basis of oscillators still looks weak. The $1.33 Fibonacci slice in the pullbacks followed by the $1.15 main support will be possible reaction zones. A break of $1.45 is expected in order to increase the volume of the rises. 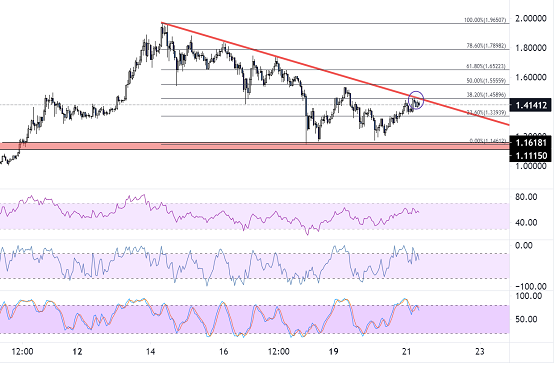 Litecoin stands at $264 this morning with a 1.3% price increase. The realized price metric, which is based on the current supply and shows the cost/cheapness of prices, is at the highest level in the last two years. This shows that the potential price targets for Litecoin, which has been a little calmer among the major cryptocurrencies in 2021 on a yield basis, should be in the higher zones.

If the LTC/USD parity is technically handled, the parity continues to sell pressure after the $339 level it tested on April 17th. Although its main course is in the bullish channel, it formed a short-term minor descending trend. Prices below the $290 channel mid-band will break the downtrend and strengthen the channel mid-upper band, with closings at $290 and above. The MACD indicator histograms are trending positively over the 4 hour period. Maturity lines confirm the bullish intersection. 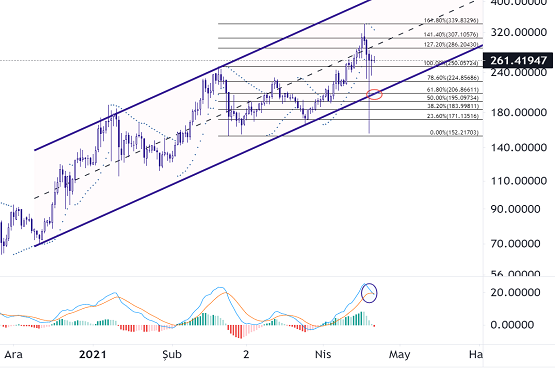 LINK is having a slight sell-off in its Asian session, but this morning it is being subject to trades at $38.1 with a 2% loss. Technically, it broke the rising triangle pattern, and as long as this triangle formed at $20-36 stays above $37.20, it will continue with a target of $52. Considering that its rising trend has passed $32.70, we can say that the outlook for LINK is a little more positive. Compared to Ethereum, a negative divergence of 4 points may bring LINK forward together with ETH on a return basis in the coming period. 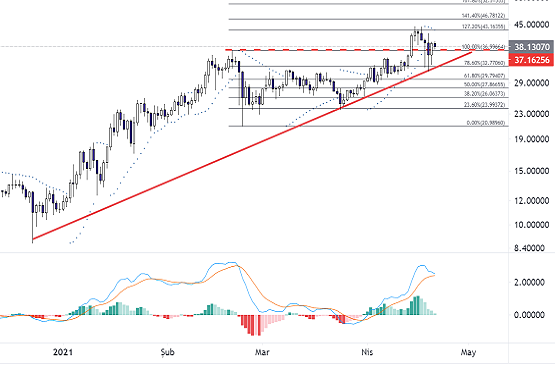 BAT/USD is trading horizontally at $1.29. Although BAT, which followed a horizontal motion in the range of $1.40-1.60 in the previous period, is still holding on to the bullish channel, the uptrend will continue as long as $1.18 is not broken. However, the resulting negative image may indicate an inverted flag in BAT. Therefore, moving below 1.20 can be a troublesome process for BAT. 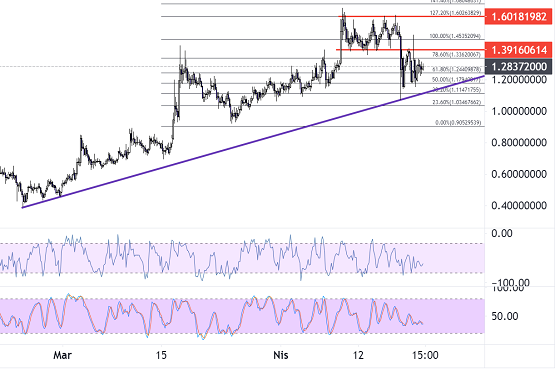