The investment company Victory Capital Management has filed an application with the United States Securities and Exchange Commission (SEC) for a fund traded on the cryptocurrency exchange.

Melanion Capital, a French investment firm, plans to launch an ETF that tracks the price of Bitcoin through its basket of stocks, according to the Financial Times.

The SEC chairman spoke of the agency's desire to "draft" both tokens sold as securities and tokens sold as commodities to protect consumers on platforms that offer the service.

Important ETF Move from Grayscale
Grayscale appointed David LaValle, a former executive at Alerian and S-Network Global Indexes, to help the company to own an approved Bitcoin ETF in the United States.

Bitcoin, which lost about 0.7 percent in the morning, is priced at $39,463. When we examined the chain data for Bitcoin, a total of $543.4 million worth of BTC transfers were made from exchanges to addresses in the last 24 hours. We expect this output in the last 24 hours, which we have seen the impact on the price, to continue in the coming period.

When we consider BTC/USDT parity technically, BTC recently broke the current rising trend as of July 21st, with the breakdowns having experienced a retreat of about 12 percent to Fibo'38.20 tranche of $37523. BTC also broke the downward trend, starting at its August 1 peak of $42605, signaling a buy-again MACD over a 4-hour period. BTC is priced close to Fibo'23.60. If this level of persistence is achieved, we think that the upwards will continue towards the August 1 peak of $42600. 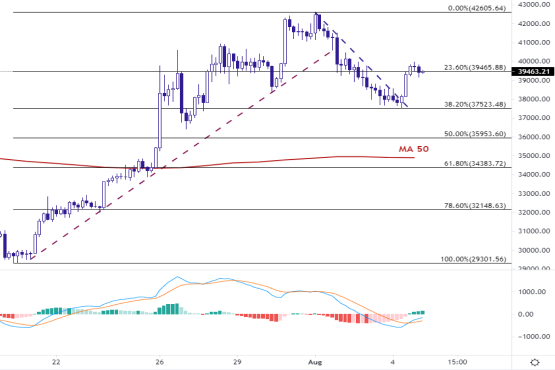 Ethereum, which lost about 0.65 percent in the morning, is priced at $2708. The long-awaited London Hard Fork for Ethereum will take place in the chain's 12,965,000th block. Accordingly, considering the block time, it is thought that this block will be processed by 15:00 today. With the updates, a new era will be entered into which innovations such as limiting ETH supply and decreased transaction fees will be discussed. Considering the updates that we think will have a positive effect on prices in the long term, the outlook for ETH is positive in the medium and long term.

When we consider the ETH/USDT parity technically, ETH found support at $2439.75, which corresponds to fibo'38.20, with a retreat of about 10 percent over the last 2 days, and showed rapid rises towards Fibo'50 tranche of $2727. When we look at the intraday price movement yesterday, it was above this level, but the daily close came in at $2724 just below. Yesterday's rise was due to a trading volume above the average for the last 20 days. While the outlook is in the direction we see resistance from levels close to Fibo'50, upward movements above this level towards $3300 will continue with the daily close. 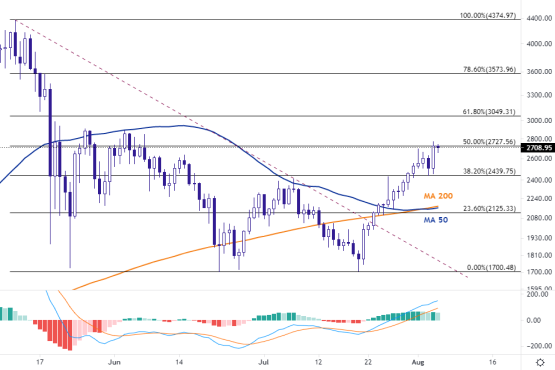 AVAX, which lost about 1 percent in the morning, is priced at $13.59. As we noted in the bulletin yesterday when we examined the AVAX/USDT pair technically, AVAX, which rejected the rising minor trend at $12.34 as of July 22, rose with the arrival of the buy signal on MACD in the 4-hour period. Avax, which broke Fibo's $12.95 tranche of 23.60 tranches, reached our initial target of $13. There was a loss of momentum in the early hours of the morning. There may be intraday retreats, but we expect rises to continue towards our second target of $14. 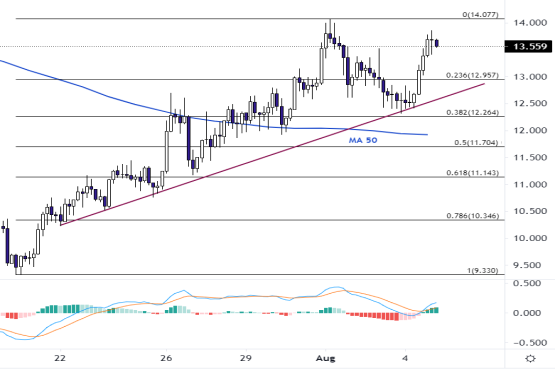 Ripple, which dominates the horizontal price movement in the morning, is priced at $0.728. When we examined the XRP/USDT parity technically, XRP, which cut its emerging minor trend from $0.72 as of July 21st, fell to $0.7059 from Fibo's 23.60 tranche with the breakdown and found support in this region. This signal is still maintained in XRP, which accelerated its upward movement with the buy signal from the stockpile yesterday afternoon during the 4-hour period. When we also examine market-wide price movements, we expect to see rises towards the August peak level of $0.777 unless there is a four-hour close below the $0.7059 level. 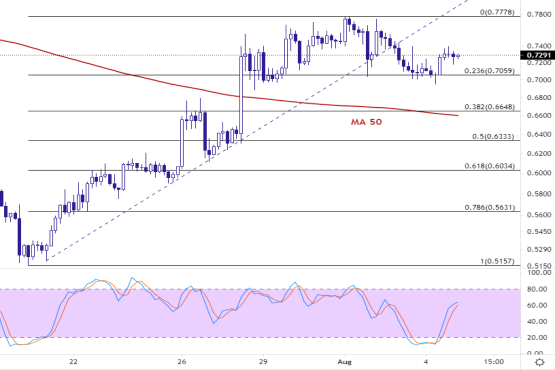 Litecoin, which lost about 1.35 percent in the morning, is priced at $140.6. When we look at Grayscale data to examine the situation on the institutional investor side, it appears that the premium is +42.02%. This suggests that Grayscale funds have been performing better recently than spot markets and have pricing that could also be a buying opportunity on the spot market side.
When we consider the LTC/USDT parity in technical terms, LTC, which has held above the 50-day moving average for the last week, tested its 50-day moving average again yesterday and made a price move in the direction of rise with the support it found and the general market. When we examined the upward movement, which was limited to about 3 percent as of the daily close, there was a reaction from the Fibo'23.60 tranche of $143.71. It continues to receive signal on MACD during the daily period. If the zone in ltc in the $143-$149 band is exceeded, our initial price target is $175. 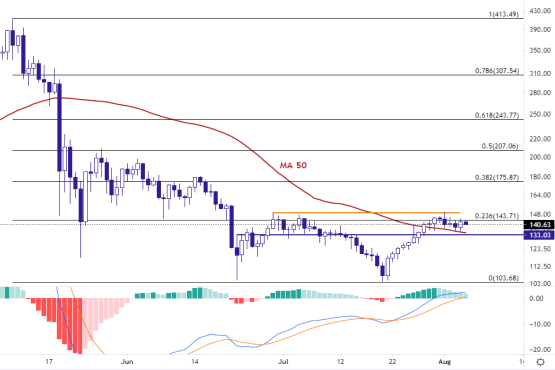 LINK, which lost about 1.76 percent in the morning, is priced at $23.76. LINK, which has recently generated above-average returns relative to the market as a whole, has also attracted the attention of the institutional investor side. 4877 LINK funds were purchased in the last 24 hours and 15202 in the last 30 days.

When we examine the LINK/USDT parity in a technical sense, LINK, which manages to differentiation positively according to the market, maintains this appearance. It managed to hold above the May 10 peak level of $53 to a July 20 low ($13.46) and held on to a 38.20 tranche of the Fibonacci correction, maintaining the buy MACD signal for LINK in the daily period. Taking into account general market conditions, the first target is the level of $23.7, which corresponds to the Fibo'50 tranche. 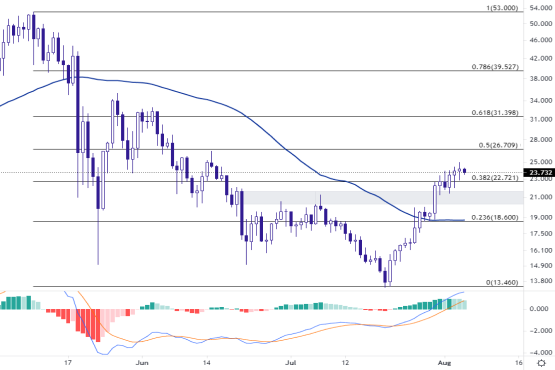 BAT, which lost about 1.8 percent in the morning, is priced at $0.6578. When we consider BAT/USDT parity in technical terms, BAT broke the upper band of the existing horizontal channel as of June 18 and the rising minor trend as of July 20th downwards on August 3rd, broke the channel upper band upwards again with rapid recovery and closed daily. The 0.64 tranche is a key support point for BAT, which has seen pullbacks in the morning price movement. If support is found with the retesti of this level, upward movements towards $0.777 can be expected. If the daily close below $0.64 comes in, this could lead to deeper corrections. 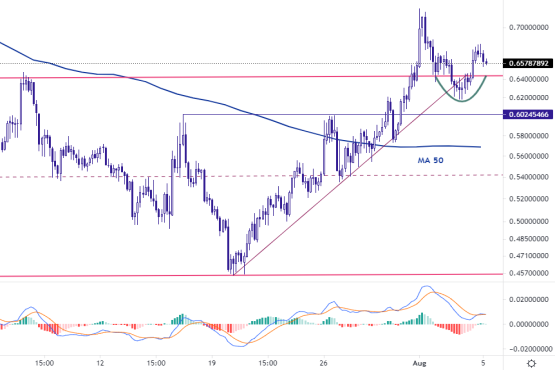