Victory Capital will Launch Private Funds For The Cryptocurrency Market

Victory Capital, which has $157 billion in assets under management, announced its plan to enter the crypto market and announced that it will launch special funds for accredited investors tracking the Nasdaq Bitcoin Price Index and Ethereum Price Index.

Hester Peirce, a member of the SEC, said that he fears that regulators will try to take over the cryptocurrency market, while mentioning that very tight regulations can suppress innovation in the market.

Peaq, portfolio company of Advanced Blokchain AG, announced its token launch plans while announcing the end of its 2.5 million euro investment round.

The New York Senate stated that in its new decision, companies that continue to mine cryptocurrencies in the state will not be allowed to expand their operations and to establish new mining companies.

An international cryptocurrency exchange allegedly kept the accounts of its users unfairly locked for months, while the stock market was sued by users.

UK-based crypto payments provider Bottlepay is starting to offer services in other European countries. Users will be able to purchase, store and spend BTC with organizations that accept cryptocurrencies.

Artifacts from Uganda National Museum to be Converted to NFT

UNICEF Will Invest Through ETH

UNICEF has announced that it will invest in five separate crypto startups through the Venture Fund and Ethereum.

One River Sees Increase in Institutional Demand for Green BTC

Crypto asset manager One River noted that institutional demand has increased for green BTC, while announcing that the majority of clients with holdings in the institutional Bitcoin fund have chosen to upgrade to the new carbon neutral stock class.

While the hash rate of large mining pools based in China has decreased by 11% to 30%, it is stated that these decreases occur due to China's opposition to Bitcoin mining.

Bitcoin, which fell by 1.59 percent in the morning hours, is priced at $ 36,787. After the hard buys that started yesterday throughout the market, BTC tested over 37 thousand from the 32 thousand region again. The lack of additional money inflows to the market also prevents the opening of sales contracts in derivative products. We do not see any new negative data that could create additional selling pressure. When we examine the chain data, we see that BTC has been out of stock markets for two days, that is, investors have not kept BTC in their wallets to sell BTC recently.

When we consider the BTC/USDT parity technically, it continues to move within a horizontal channel even though it has broken the downward trend that has been going on since May 12. Although Fibo'tested above the 23.60 retracement level, it could not stay above $37,000. A short-term buy-sell strategy can be applied with purchases from the support at $ 35,700, which corresponds to the middle band of the channel, or if it persists above the correction level of Fibo'23.60, new purchases with the target of $ 39 thousand, the upper band of the narrow horizontal channel, will be appropriate. 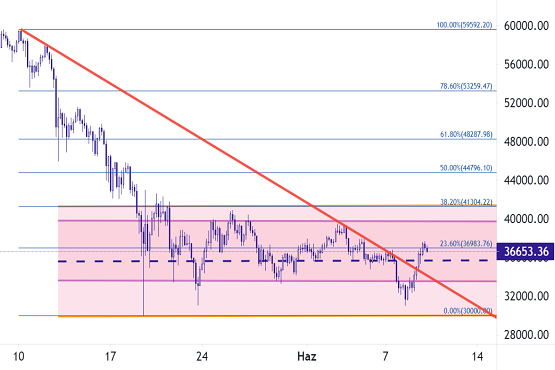 Ethereum, which fell by 3 percent in the morning hours, is priced at $ 2528. The total value of deposit contracts for Ethereum 2.0 reached a new record level of 5.42 million. Investors' demand for Ethereum 2.0 is increasing day by day. On the other hand, when we examine the chain data, there is no significant increase in the number of new and active addresses. We find the main developments in July positive in ETH, whose Goerli testnet will be published on June 16, before the London hard fork.

When we look at the ETH/USDT parity technically, it is seen that it broke the downward trend that started on May 12 and is trying to maintain these levels. If it continues its movement above the downtrend, the $2750 levels, which coincides with the middle level of the Fibonacci retracement, can be targeted. For now, the compression continues with the ascending triangle. The $2465 and $2385 levels support the lower. 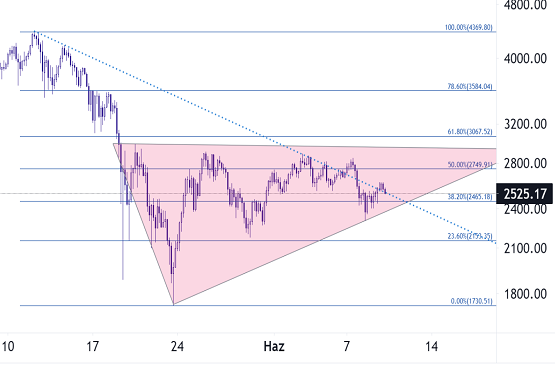 AVAX is priced at $14.5 this morning, depreciating by about 5.6 percent. When we examine the AVAX/USDT pair technically in the 4-hour period, the positive divergence formed in the RSI on June 8-9 worked and started to rise from the level of $ 13.80. Testing the descending minor trend that has existed since May 19 with this upward movement, AVAX could not break this trend and continues the price movement just below it. Weak on the upside, AVAX will reach its target at $16.35 if it breaks the $14.70, corresponding to the downtrend. In AVAX, which is weak compared to the market in general, the level of $ 14.70 is very important to avoid pullbacks. 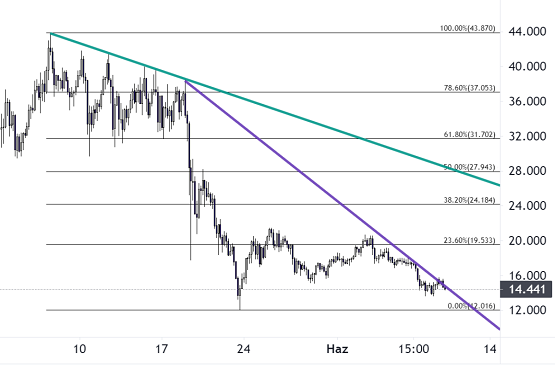 Ripple is priced at $0.88, depreciating by about 3.5 percent this morning. There was a market-wide recovery with the rises in BTC yesterday. We see that the followers of the case made statements in favor of Ripple after the SEC still did not submit the requested documents. Ripple is expected to respond today to the 1-page response from the SEC yesterday. There is an expectation that the 1-page response published by the SEC is insufficient and the case may be settled in favor of Ripple soon. Considering all these developments and the interest of institutions in XRP, we read the outlook for XRP as positive.

When we examine the XRP/USDT parity technically, there is an ascending channel formation that started on May 23 in the 4-hour period. XRP, which rose above the resistance of $ 0.88 with the support it found at $ 0.785, which is the channel lower band, retested this level. Momentum cut the downtrend to the upside and MACD crossed to the upside yesterday giving a buy signal. We think that our first target for XRP, which you think will continue with the positive news flows in the markets and XRP, will be a rise towards the channel middle band and the important resistance level of $ 0.995. 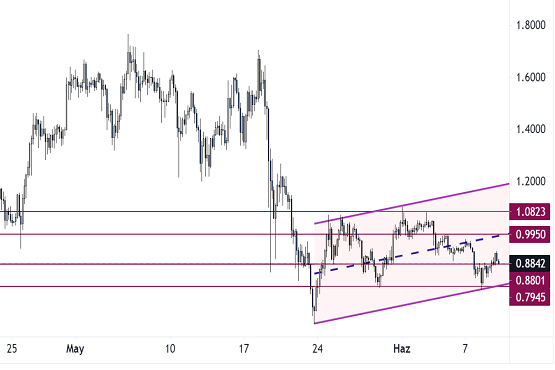 LTC lost about 2.6 percent this morning and is priced at $168.2. A new update may come soon in LTC, where the MimbleWimble update is being tested. However, the current price of LTC, whose MVRV Z-Score is around 0.31, appears to be suitable for long-term buying when compared to its fair price.

When we look at LTC/USDT technically, it retested the secondary descending trend that has existed since May 10 yesterday and closed the daily candle on it. As we mentioned in our newsletter yesterday, LTC Fibo'38.20, which closed 4-hours above $156.75, rose to the resistance level at $167.7 and held above it. In the 4-hour period, momentum broke the descending trend upwards and for LTC, which has risen above the Bollinger middle band, we expect a rise towards $182.5, which coincides with the next target Fibo'23.60 slice and Bollinger upper band, unless the upward price movements will affect the market overall. 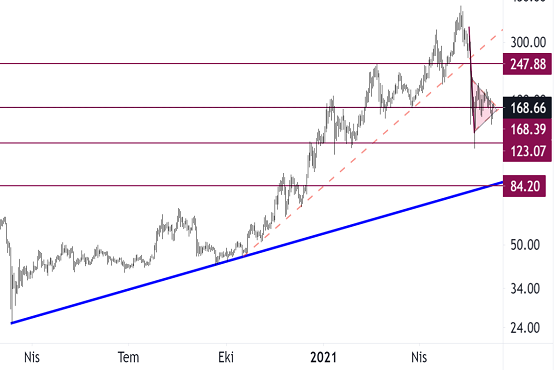 LINK is priced at $24.45, depreciating by about 4.4 percent this morning. When we checked the inflows and outflows to exchanges for LINK, which did not have a significant increase in the number of active and new addresses, the outflow from exchanges to wallets increased on an average of 7 days. The acceleration of the exit from the stock markets shows us that the confidence of the investors in LINK has started to increase and the short-term selling pressure has decreased. When we check the corporate side, we see that Grayscale has purchased 1675 LINK in the last 24 hours. When we evaluate this data, we read the outlook as positive for LINK.

When we consider the LINK/USDT parity technically, we see that the positive discrepancies in the 4-hour period work and the upward price movement begins. With this rise, we see that the buy signal continues in the stochastic for LINK, which has risen above the resistance zone in the $23-23.5 band. We think that LINK, which we do not encounter any metrics showing that the upward movement has ended, will continue to rise towards its first target of $ 26.5. 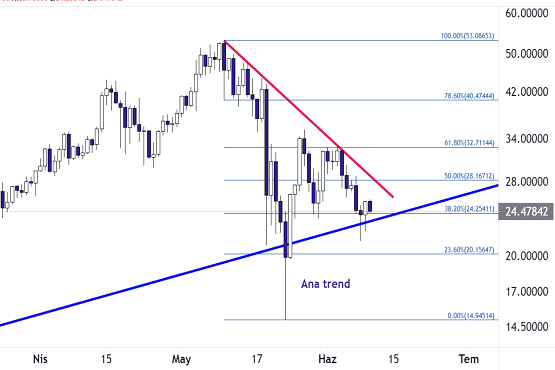 BAT is priced around $0.686, depreciating by about 0.2 percent this morning. When we consider the BAT/USDT parity technically, price movement is dominant between the Bollinger lower and middle band in the daily period. For BAT, which has a symmetry triangle formation, MACD continues its buy signal on June 1st. Considering the positive news flow prevailing in the market for BAT, which reacted at the resistance level at $ 0.711, which is the Fibo'38.20 slice, we think that the rises will continue. We expect to see rises towards the Bollinger middle band at $0.736. 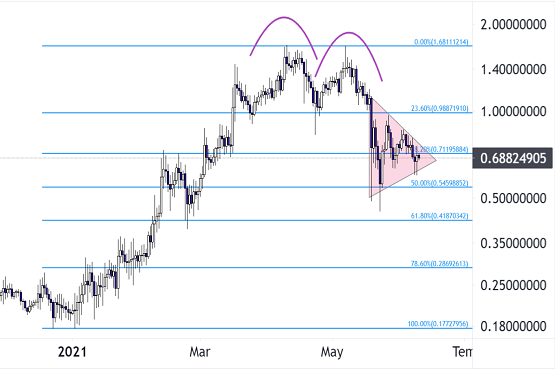