Visa, Mastercard and PayPal have joined several companies that have left Russia following Putin's “special military operation” against Ukraine. As such, the question remains whether the Russians will turn to cryptocurrencies.

Geopolitical Tensions May Delist Bitcoin from the Risky Asset Class

In a new interview with Bloomberg Technology, CoinShares Chief Strategy Officer (CSO) Meltem Demirors told host Emily Chang that worldwide sanctions following Russia's invasion of Ukraine and incidents such as the loss of banking access during a protest against the governments of truckers in Canada could remove Bitcoin from the risky investment category.

Cryptocurrencies can be used for illegal financial activities, including sanctions avoidance. However, the fact is that digital assets are more difficult to use for illegal purposes than the traditional ecosystem, and the biggest reason for this is the way transaction information is stored in peer-to-peer digital asset transactions. Specifically, transparent blockchains create a permanent and invariant transaction log.

Despite the Dropping BTC, the Number of Small-Sized Investors Who Hold Bitcoin in their Wallets Records All-Time-High

The IntoTheBlock analysis shows that small investor accumulation in Bitcoin is likely to be at its peak levels. The total balance of addresses with 0.1 to 1 BTC has reached record levels of over 780,000 Bitcoins.

Ken Griffin, CEO of Citadel, who is skeptical about Bitcoin, admits he was wrong about crypto. "It is right to assume that in the coming months you will see us begin to create markets in cryptocurrencies," he said in a new statement.

Earlier this week, the Virginia Senate overwhelmingly passed a landmark cryptocurrency banking law that previously cleared the state's House of Delegates. Following the passage of the Bill, Virginia Governor Glenn Youngkin is expected to sign to the bill to make it a law in the United States. The House Bill No. 263 reads: “A bank may provide its customers with virtual currency custody services so long as the bank has 26 adequate protocols in place to effectively manage risks and comply with applicable laws.”

The Swiss Federal Government wants to freeze the crypto assets owned by Russian individuals and businesses within the Swiss borders. Those measures punish Russian citizens and businesses beyond all sanctions related to the European Union.

Bank of Israel: Adoption of CBDC Will Not Materially Affect the Banking System

Adopting the digital shekel is not expected to "materially affect the banking system", the Israeli Central Bank said. However, it warns, any issuance of such digital currencies would likely lead to a drop in the public's deposit volume.

The G7 countries and the European Union are exploring ways to stop Russia's use of cryptocurrencies to avoid sanctions. "We must take measures to prevent listed persons and institutions from moving to unregulated crypto assets," the German finance minister said.

According to the Korea Times, several South Korean-based cryptocurrency exchanges have imposed bans on Russian users.

Sandbox Metaverse Reaches a New Milestone: Two Million Users
The Sandbox metaverse ecosystem has announced that it currently has two million registered users and the Alpha Season 2 launch is live. According to the GamesBeat report dated March 3, 2022, during the Sandbox Alpha Season 2 launch event, all registered users will have access to a variety of experiences including Snoop Dogg's Foreplay, Star Ferry Pier, and more in the metaverse.

Bitcoin lost a 1,21% value during morning hours and is priced around $37.928. The IntoTheBlock analysis shows that small investor accumulation in Bitcoin is likely to be at its peak levels. The total balance of addresses with 0.1 to 1 BTC has reached record levels of over 780,000 Bitcoins.

When we consider the BTC/USDT pair technically, there was a surging Bitcoin last week, but all the gains were wiped out at the weekly close. There is no major change in BTC, which had tested $44.700-45.000 four times and could not break it upwards. The fall started. BTC, which has lost 39,000-40,500 support zones downwards again, we expect the fall to continue towards $36,500 as we mentioned in the daily newsletter on Friday. 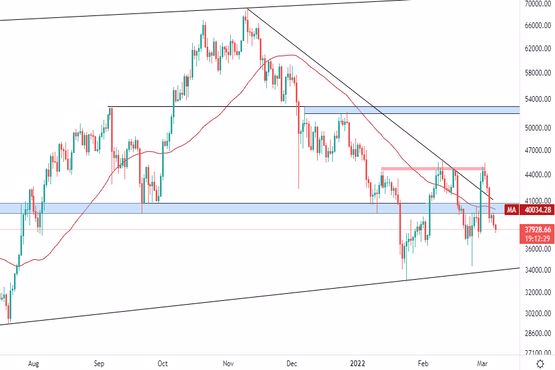 Ethereum lost a 0,80% value during morning hours and is priced around $2527. When we consider the ETH/USDT pair technically, ETH, which had retreated to $2300, ignited a spike above $3000 with the rapid recovery of BTC. But most of those gains were taken back last week. In ETH, which had a negative outlook as of the weekly close, sales accelerated with the breakout of the short-term rising trend on the 4-hour chart. We expect the drop to continue towards the $2,318 support zone. 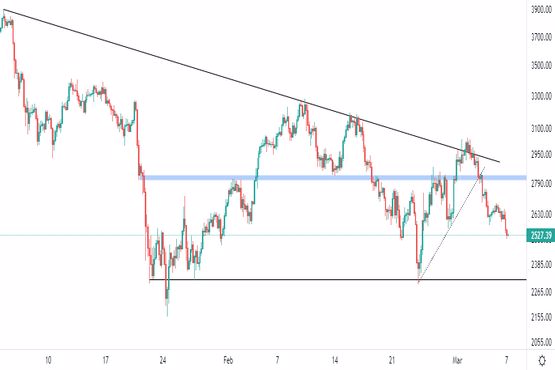 AVAX lost a 1,20% value during morning hours and is priced around $71.57. When we consider the AVAX/USDT pair technically, AVAX has faced rejections from the major downtrend and a bearish engulfing candle formed as of the daily close. AVAX continued to drop after the formation, it lost the support zone marked in blue at 75.5-50 in AVAX. In our opinion, the drop towards $69.5 (the short-term uptrend) might continue. 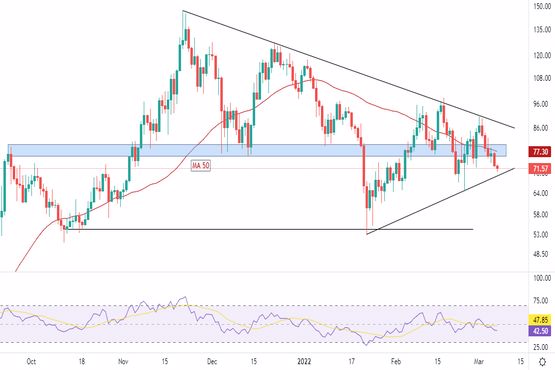 Ripple lost a 0,40% value during morning hours and the current price is $0,7219. When we consider the XRP/USDT pair technically, XRP could hold above the support level at $0,7121 despite the market fall. On a weekly basis, it sustains positivity other than altcoins. In XRP, which has not yet broken the short-term downward trend, the price movement will be determined by the breakout of this stagnated area. 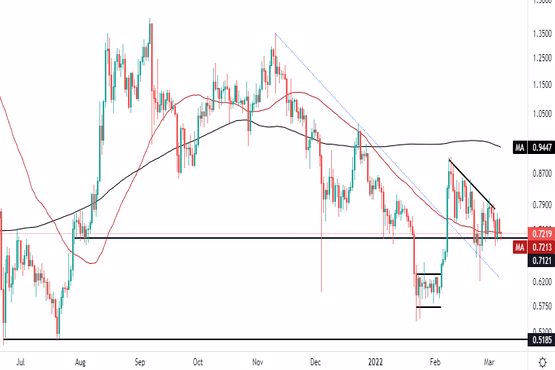 LTC lost a 0,80% value during morning hours and is priced around $99.3. When we consider the LTC/USDT pair technically, with the positive trend throughout the market, LTC, which had broken the resistances at both $104.9 and $ 113.1 downwards, sustaining the negative trend this morning. At the same time, for LTC, which is still priced below the major downward trend, market conditions remain uncertain and may find support at $83 if sales pressure continues.

LINK lost a 3,70% value during morning hours and is priced around $12.79. When we consider the LINK/USDT pair technically, LINK has price action inside the horizontal channel as of May 26 and lost the lower line as of the daily close yesterday. There needs a positive divergence to be confirmed in the RSI as of daily close. If it holds onto the downtrend, the drop may deepen. 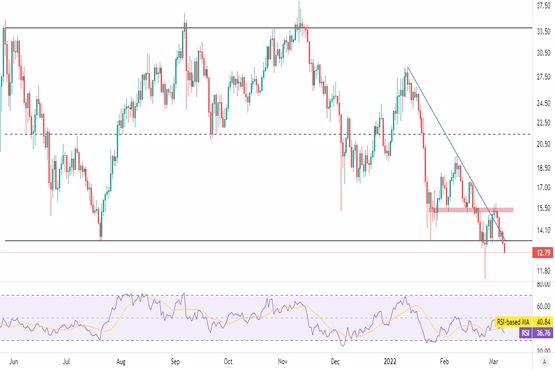 BAT lost a 2,20% value during morning hours, and is priced around $0,6255. When we consider the BAT/USDT pair technically, BAT continues price action below the downtrend on November 28. If BAT, which fell to the support zone at $0.64-0.70, sustains in the daily chart below this zone, we expect the drop to continue towards $0.56. 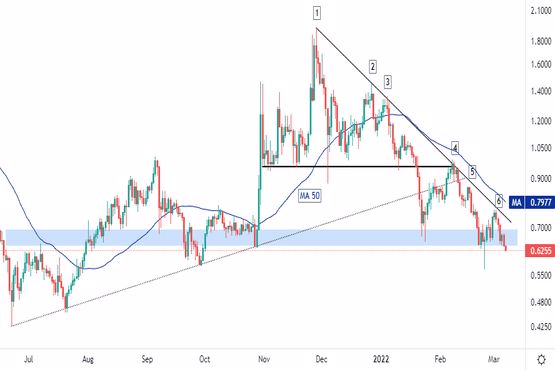