Voyager Digital, the 4th largest company among publicly traded companies holding BTC, was known to have major problems following the 3AC crisis. Voyager, which had given 3AC a loan of 665 million, was caught in the middle of a major crisis when it failed to receive repayments. With their announcement, it was announced that withdrawals and several other transactions were temporarily stopped, and it became clear that this company was also in danger of going bankrupt.

Ripple's Important Agreement with the Government of Colombia

Sango Coin from the Central African Republic
Another important step has come for crypto exchanges from the Central African Republic, known for its crypto-friendly movement and investments. The country's government, which announced the national crypto money Sango, announced that Bitcoin and Sango would be the recognized crypto coins of the country. Sango Coin will be used to modernize the country's infrastructure and metaverse projects.

Bitcoin whales started collecting BTC when BTC fell below the $20,000 levels. According to the data shared by Glassnode, people who have more than 1000 BTC in their wallet have started to buy now. This group owns a total of 8.69 million BTC, which is 45% of the total BTC.

As it is known, stablecoins such as Tether need to hold at least 1-1 reserves in order to maintain a $1 stabilization. Tether, the largest of the stablecoins, has published a statement about the change in its reserves. The announcement announced that the company was raising U.S. treasury bonds and trying to reduce its paper reserves to zero.

Duke Energy, the 2nd largest energy company in the US, announced that they are exploring Bitcoin mining and integrating mining into its demand-fulfilling strategy. Analyst Justin Orkney, one of the company's executives, confirmed the research in a speech and said that they are investigating how to include miners in the networks.

Bitcoin's selling, which started as of Thursday, was supported at 19,000 levels. The decline of some funds and important companies to the sinking stage and some funds that are liquid have a significant share in the decline of BTC. The negative news on Friday is that Voyager, one of the biggest BTC supporters, is experiencing major problems. A possible BTC reduction or exit of Voyager could create an imbalance in the market. Because the company has $ 240 million of BTC in its hands.

Bitcoin is priced at $ 19,124 with a loss of 0.99% in the morning hours. BTC, which is in a channel on the 4-hour chart, has spent the last 3 days in a short band. BTC, which has a tight movement, has tried several times, but has not managed to break below the 18,760 levels. The fact that the general weather is negative at the moment indicates that the 18,700 levels will be retested. As long as this support manages not to break, it will be a region that encourages investors. 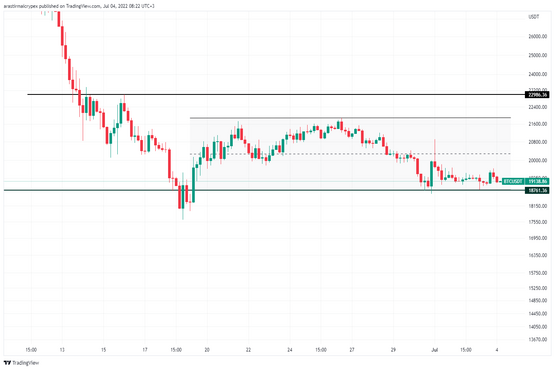 ETH, which has been very strong in the past weeks, has moved positively after its fall below $ 1000 and gave a strong image until last week. This led to an increase in money entries and the number of addresses. However, with the inability to break the ETH 1250 dollar level for the last 1 week, it has returned to its weak and volume-free periods and 1050 dollar levels.

Today, ETH, which lost 1.90% of its value in the morning hours, is priced at $ 1053. ETH, which found itself at support levels while trying to break up the rectangular formation it is in after the big decline of crypto assets led by Bitcoin, is now stuck at $ 1050 levels slightly above the support point at $ 1000. Although it has tested the critical support level of $1000 several times, the fact that it has not been able to break it can be considered important in the long run. 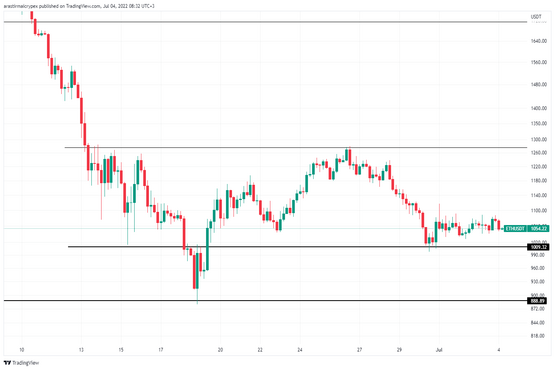 AVAX, which has lost 1.38% of its value as of the morning hours, is priced at $ 16.47. AVAX could not break the 21.50 levels after the upward movement between June 20-26 and then made a 5-day falling movement. AVAX, which has entered a channel, has repeatedly tested the very critical support at the 15.80 level, but has managed to remain strong and not broken. For AVAX, which is currently priced at 16.50 levels, we can say that 15.80 and 18.60 levels should be considered. 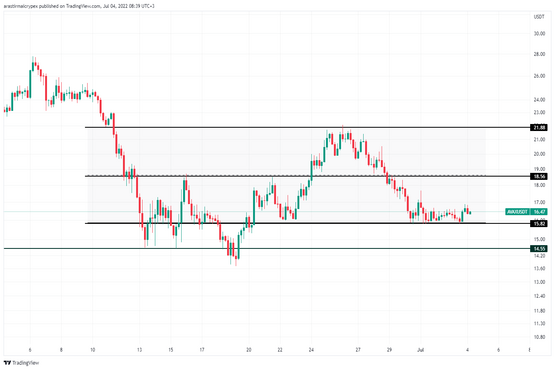 XRP, which lost 0.75% of its value in the morning, is priced at $ 0.3192. Ripple, which is in a descending channel on the hourly chart, managed to break down on Thursday but immediately returned to the channel. For XRP, which is currently testing the resistance level in the upper band of the channel, a breakout can go up to 0.35 levels. If the resistance cannot be broken, the channel middle band at 0.31 levels will serve as support. 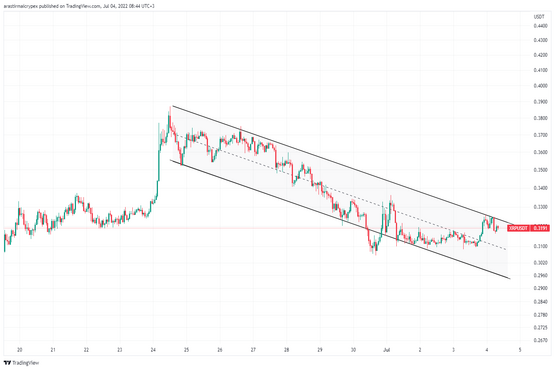 LTC is trading at $49.99, down 1.88% as of the morning hours. LTC is located in a channel on the 4-hour chart. LTC, which has been in a channel between $50-57 since June 19, is currently testing the channel lower band of 49.80. As we have been saying for the last 1 week, the downside breakdown of the channel and the support six-day close may cause LTC to fall to $ 40. 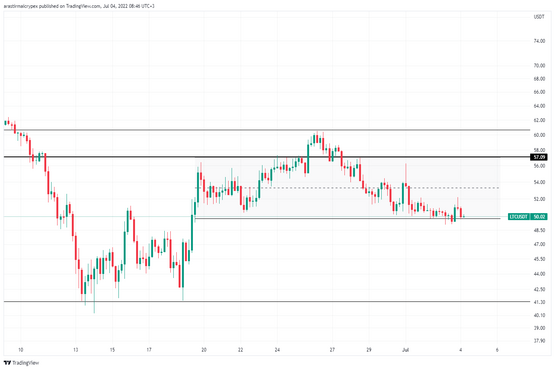 LINK is down 2.07% at $6.09 today. LINK is located within a channel within the 4-hour chart and is currently attempting to break the channel mid-band upwards. Although it has tried to break the resistance many times, if the LINK 6.30 levels, which have failed to break and returned to the channel middle band, are broken, we can say that the next target is the 7.50 level. 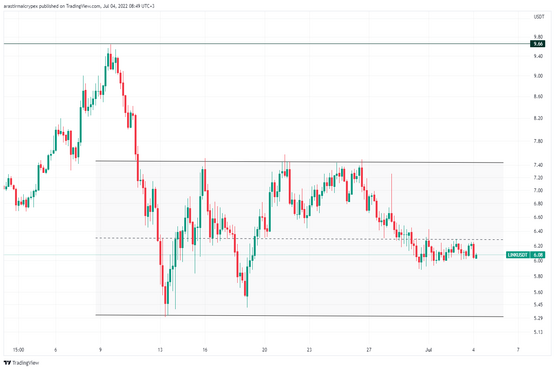 BAT is trading at $0.3912, down 2.60% as of morning hours. When we look at the 4-hour chart, BAT, which is still in the same channel, gave a very strong image in this period when crypto coins were weak. The BAT, which approaches the channel midband and then quickly turns upwards, is stuck between 0.39-0.42 levels in the upper band of the channel. With an upward movement in the market after this strong appearance, BAT will be able to break this channel that it has been in for more than 1 month. 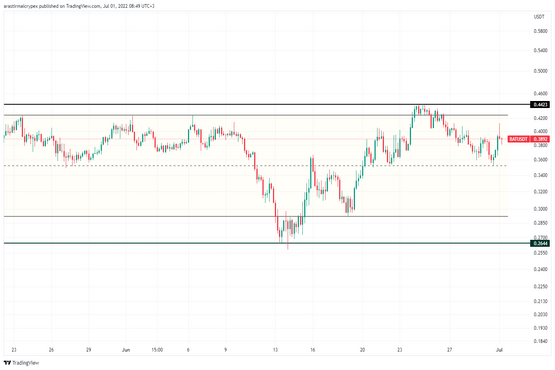