Generation Y Prefer Bitcoin Over Gold
According to a survey conducted by a financial consultancy company, 67% of people between the ages of 25-40 who participated in the survey see Bitcoin as safer than gold.

Grayscale Receives $ 270 million Bitcoin in 7 Days
Grayscale bought $ 270 million worth of Bitcoin in the last 7 days, increasing the number of assets it manages to $ 13 billion. The assets they have managed since the beginning of the year have increased by 465%.

Sold for $ 777K in a Single NFT Auction
Nifty Gateway, the non-tradable token (NFT) marketplace, hosted an auction where a single NFT artwork was sold for $ 777,777 as the bid made in the last second doubled the price. Artworks are also transferred to digital platforms and stepped into blockchain technology.

Banca Generali is preparing to offer cryptocurrency service in 2021
The Italian bank, which cooperated with a company that offers e-wallet service, stated that it has made this attempt to open this service to its own customers. It is also among the statements that the bank will receive a share of $ 14 million from the company providing the service, in order to continue the growth of the company.

Bitcoin Explained by New Senator
Cynthia Lummis, who will serve as the Republican Senator from 2021, said in a podcast she attended that she sees Bitcoin as a store of value. Lummis is expected to play a role in the introduction of Bitcoin to the American Senate in the coming period.

Leading Exchange Clients Stake Over 160K Ethereum
According to Ethereum 2.0 data, it represents a notable increase from 100,000 units in Ethereum 2.0 that the firm's customers owned on December 8. A 60% increase was seen in just one week. 163,712 ETH worth roughly $ 95 million at average prices.

A Fidelity Investments-Backed Exchange to Run Licensed in Hong Kong

With the license issued by the Hong Kong Securities and Futures Commission, the relevant exchange will be able to allow trading in digital assets. Initially, major cryptocurrencies such as BTC and ETH are expected to open.

Bitcoin is still trading above $ 19,000 this morning. Even though there is a fear that 150 thousand Bitcoins, which can be released after the Mt. Therefore, such a sale may be a bottom opportunity that can be found after a long time, but we see that it has not been distributed yet and the price is not affected by this. Therefore, there is no need for panic behavior. On the other hand, FOMC's decision and actions will be announced today. Pandemic aids and protection of pigeon language may have positive reflections in terms of BTC and other altcoin prices.

When we consider BTC / USD technically; The short-term minor uptrend formed on the hourly charts crosses the $ 19,300 level. Therefore, this will be our daily support point. Preservation of the 19,300-19,600 horizontal narrow band and the rising triangle view may bring us closer to the $ 19,800 limit again. Although the outlook is in an upward trend, we maintain the horizontal trading strategy in the short term. 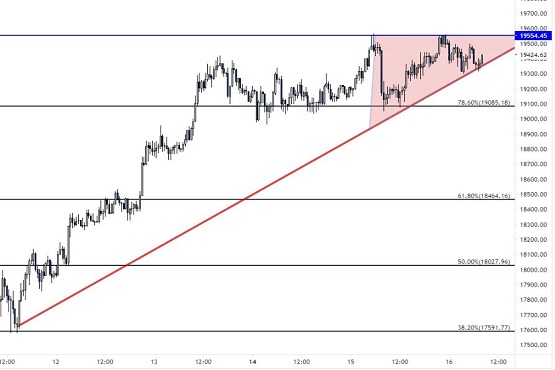 Ethereum, which fell to the $ 520 level in early December, is trading at $ 585 this morning, with a slight sideways movement against the dollar. The recovery in demand in Ethereum's longstanding preparations is quite satisfactory. The Grayscale Digital Fund has purchased 364.8 thousand ETH in the last 30 days. However, the amount locked for the mining reward in the 2.0 transition reached 1.4 million Ethereum. The amount locked in DeFi (decentralized finance tokens - mostly Ethereum based) reached $ 15 billion. Therefore, developments in Ethereum are following a positive trend day by day. This situation basically supports Ethereum's price development upwards.

When we consider ETH / USD technically, the 'Bullish Engulfing' bullish turn candle formation on the daily chart occurred at the point where the uptrend passed. In the four-hour period, the double bottom formation that forms above this trend is in the foreground. The $ 590 level will be followed throughout the day. Because if this point is broken, the double bottom formation can coincide with the $ 630 levels, but the upward movement can be accelerated. 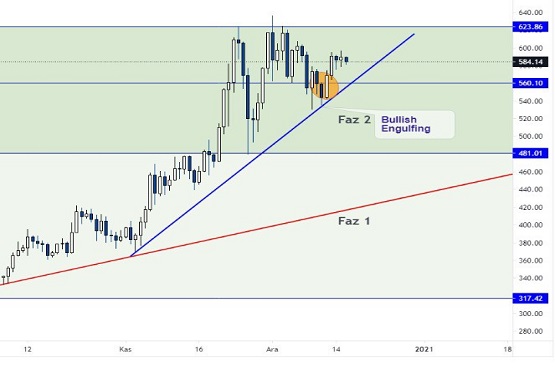 AVAX is trading at $ 3.20 this morning. After sliding behind the $ 3.00 level after the sharp declines last week, the AVAX is experiencing a V-type recovery with its technical outlook. Avalanche generally values ​​the blockchain industry and the immutable token (NFT) industry. Various games and applications are being designed to raise awareness of individuals and businesses about how blockchain can transform games, improve or disrupt existing business areas, and accelerate adoption. Now Avalanche has made a new breakthrough and has joined the Blockchain Game Alliance (BGA). Nevertheless, although we cannot see that it has a significant impact on prices, they continue to develop business in terms of medium and long term use and spread.

When we consider AVAX / USD technically; As of December 7, withdrawals accelerated in AVAX / USD from $ 3.40 to $ 2.80. It took a fluctuating course, with gradual ups and downs. With the triangle formation formed, their retreats gradually recovered. If the possible increase continues, the levels of $ 3.40-3.57 come to the fore. With the improved outlook, we evaluate AVAX / USD positively in the short term. 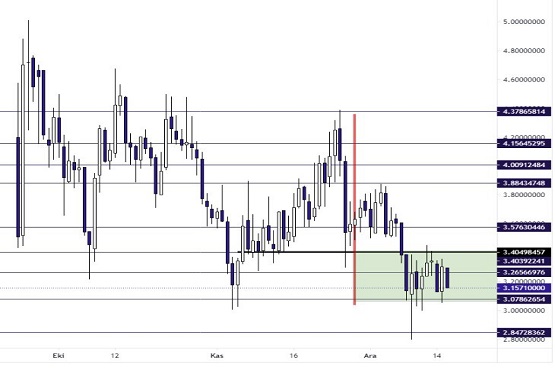 Ripple was pricing around $ 0.49 yesterday, while retracing around 4% this morning, moving around $ 0.45. Especially after the Spark Token airdrop took place on December 12, exits from the XRP / USD pair continue to be seen. Ripple, which has a valuation of over $ 10 billion, has implemented its first project, RippleX, based on its own developer platform XRP Ledger. With this project, a bridge was established between Java applications and XRP Ledger. In addition to the support of institutions, the arrival of new projects can positively contribute to the medium and long term. They also reported that the second airdrop project will take place in the coming weeks, according to the statement of the Flare Network. The arrival of a second airdrop could limit sales here as it could increase XRP demand to lock in. Will Spark Token be as much in demand as the airdrop, but we still think that a second airdrop news can buffer the falls here.

When we look at XRP / USD technically, it is moving forward near $ 0.45, reacting downwards compared to yesterday's trading on the four-hour charts. Although it tries to break the downward trend that has been going on since November, eight times in the four-hour candles, it continues to move in the lower zone of the trend. With its rising again, $ 0.4690-0.4860 levels come to the fore. The increase in the distance between the decreasing trend and the price and our presence at the support level can be considered as reasons for a short upward reaction. The view is horizontal and slightly weak. 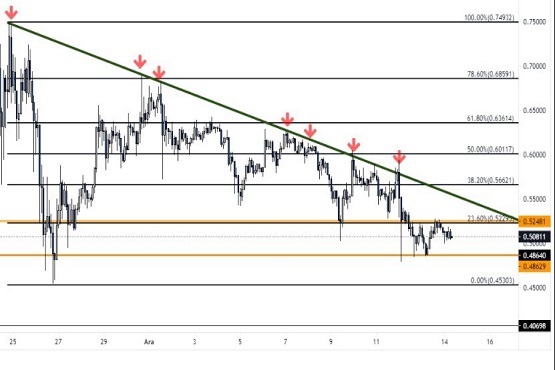 Litecoin is moving around $ 80.7, recovering after yesterday's withdrawal of around 2% this morning. According to Chainalysis data, the amount of Litecoin that investors keep in exchange wallets has increased 2.5 times in the last day, reaching the highest level in the last six months. In addition, according to Glassnode data, Litecoin actual transaction volume reached the highest level in the last nine months. In Litecoin, where the developments in demand are followed, the main party positively affects LTC. We see that the short-term market sentiment has disappeared. It provides a positive indicator in terms of the longer term volatility of Litecoin's value.

When we consider the LTC / USD technically, LTC / USD, which rose to the level of $ 83 yesterday, is trading at $ 81 with its morning retreat. The fact that the descending channel continues to operate above the upper support band of $ 78 can be welcomed for the market. However, in the image that is formed after the OBO view that formed between the $ 80-85 levels in the four-hour period, this zone points to the $ 75 levels. Therefore, it is worth paying attention to this support throughout the day as OBO will start with this support break at $ 79.50. On the other hand, as these regions are a support area in possible withdrawals, prices may visit this region for a short time. 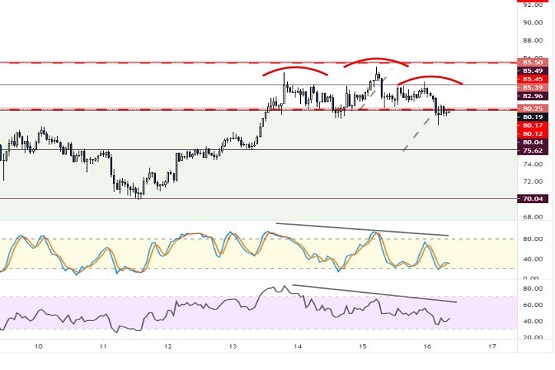 LINK is moving around $ 12.40 with a 2% retreat from yesterday's trading. According to Glassnode data; LINK's percentage of supply on smart contracts reached an all-time high. The increasing demand of institutional investors for Ethereum has also caused an increase in the amount of Ethereum locked. Especially the increase in trust and demand in the Ethereum blockchain can also have a positive effect on LINK using the Ethereum network. After today's FOMC, the value of Bitcoin and Ethereum against the dollar could possibly increase due to the weakness in DXY. This may cause an upward reaction in LINK, which has been falling in recent days.

Technically, LINK / USD continues to move forward within the rising channel that has been running since September. The target area of ​​$ 13.60 comes to the fore after the TOBO view that occurs in a four-hour period. The support of the bullish channel could be considered at $ 12.25 for possible retracements. The Stochastic and% R oscillators moved into the bearish bearish zone but into the oversold zone. Therefore, when both oscillators tip direction upwards, the chances of reaction may increase in LINK / USD. We're following the retracements towards the supports for a bullish on LINK / USD. 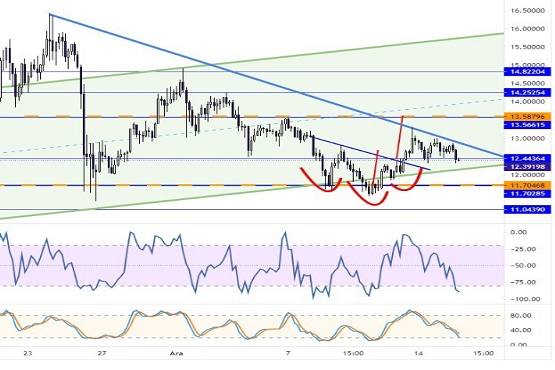 BAT is moving around $ 0.2190 this morning, up 1% from yesterday's trading. According to Glassnode data, the volume of transfer between wallets has increased by 40% in the last day compared to the two-day averages. While 1% increase in BAT / USD price this morning compared to other cryptocurrencies on our exchange causes a positive divergence, we can say that it creates a positive basic scenario for BAT, which has remained passive in recent days. However, due to the instability it shows when it rises, we continue to remain short-term for BAT.

When we consider BAT / USD technically, it continues a progressive course in hourly periods according to yesterday's transactions. In BAT / USD, continuing its course within the rising channel that started at $ 0.2000 on December 11, the upper resistance band of the channel can be taken into account at 0.2285. For now, the recovery in the course that moves in this channel is still weak. 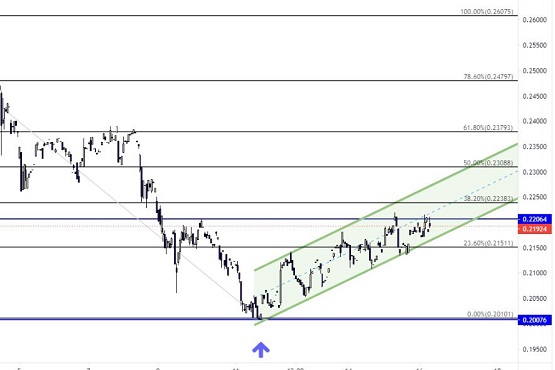