The asset management firm WisdomTree, which has $ 64 billion in assets under its management, applied to the US Securities and Exchange Commission (SEC) to issue a Bitcoin exchange-traded fund (ETF).

France Will Sell Bitcoin With Auction

France seized 611 bitcoins from a group of individuals in 2019. At the auction to be held in Paris on March 17, the seized Bitcoins will be put up for sale at the auction.

Billionaire gold investor Peter Schiff, known for his negative attitude to Bitcoin, stated in his statements on Twitter that he sold all of his son's assets and bought Bitcoin with his entire portfolio.

The Central Bank of Russia announced that they are planning to test the digital ruble in 2022. Russian officials stated in their statements that a prototype digital ruble will be completed by the end of the year.

Goldman Sachs Business Manager John Waldron stated that customers' demand for cryptocurrencies is increasing and they are investigating how to meet this demand as a company. A previous in-house survey showed that 40% of Goldman Sachs investors own cryptocurrency.

Bitcoin is trading slightly sellers this morning after some pressure it experienced during the Asian session at $ 57,200. Yesterday, after the news of the SEC's debt basket fund approved by JP Morgan, it found support at $ 54,000 with the expectations that the market will grow by new users. In the US, direct aid will begin at the weekend with a $ 1.9 trillion package. The movements were pushed up yesterday, with the ECB clearly saying that the $ 1.85 trillion pandemic aid program (PEPP) would be increased in a concrete way. The synchronized balance sheet expansion aid packages offered by both the US and the Eurozone have enormous potential in terms of the money supply in the market. For this reason, in the upcoming period, the biggest story will be distributed and its effects on the financial world. In addition, there will be a course of decline in the amount of BTC, which is held on the stock markets and has seen its lowest level for two years.

When we consider BTC / USD technically, the upper band of the bullish channel that has been formed since the $ 43,000 level is above the $ 58,000 level. Prices that came back after testing the upper band of the channel also created a minor upward trend. The $ 55,100 level, which coincides with the trend and the Fibo'78.6 retracement zone, will be major support. The outlook is bullish and positive. 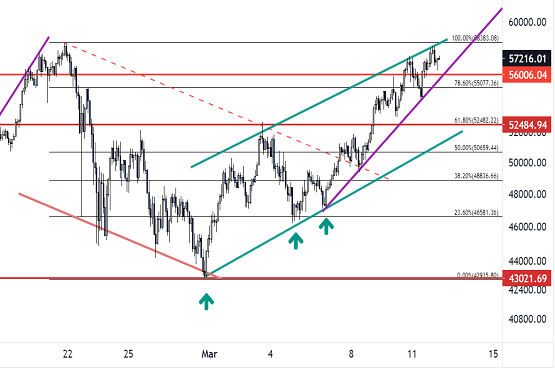 Ethereum is pricing in horizontal view just above $ 1800 this morning. The size of the market cap of the cryptocurrency market has increased by 3% since yesterday. However, the optimism improvement that will come in the next few weeks in Ethereum caused the reaction of the miners and they stated that they will launch a hacking attack on the system on April 1. In parallel with the decrease in the amount of ETH kept in the stock exchanges, the change in the number of new addresses has increased by 9.5% in the last 24 hours. In Ethereum, which is fundamentally supported, the April 1 news may slow the course, but we can see more clearly that the price is drawing the direction between March and April, when there are improvements and updates.

When we consider the ETH / USD pair technically, the bullish channel that started from the $ 1290 level has also formed a minor trend within the channel, with an outlook similar to BTC. Currently, trading continues horizontally between the two Fibo retracement ranges at 1755 (61.8%) and $ 1880 (78.6%). However, if the triple peak formation that has been formed in the last 4 days also breaks the $ 1750 level, it will get a confirmation and the $ 1650 levels will come to the fore. Therefore, it is useful to be cautious at $ 1750 levels. 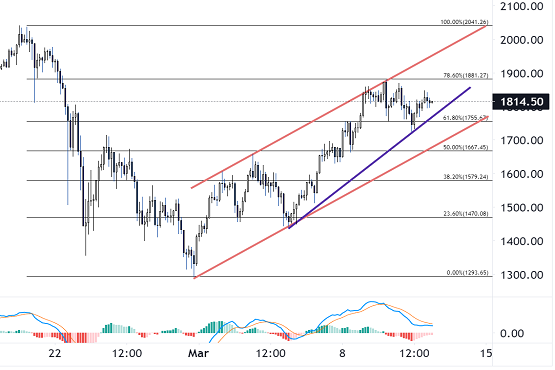 The AVAX / USD pair is pricing with a 1.5 percent retreat from the $ 30.30 level this morning. The reaction over the $ 25.00 support zone seems to have pushed the pair above the $ 28.30 resistance and this level became the new support. However, there is currently a horizontal course between $ 28.60 and $ 35.00. For this reason, the consolidation phase is not yet over. Closings above the $ 31.00 support in the Fibo'23.60 correction may be subject to gains on the AVAX side. % R, Stochastic, and RSI oscillators point out that the sideways pair has not yet reached reaction zones. 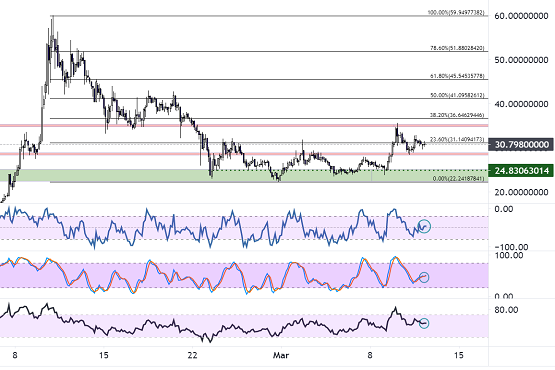 The change of the SEC chairman during the lawsuit between the SEC and Ripple created a positive perception for XRP investors. Then, in the letter sent to the New York Court, it was stated that the names Ripple's struggling with were officials before Biden's leadership. Gary Gensler, one of the strongest candidates for SEC presidency, won the vote by the Banking Committee 14-10, waiting for the final approval of the senate. If Gensler takes the lead, he will have the power to withdraw the case on behalf of the SEC. Gensler, who works on blockchain and is known as a crypto lover, in a statement he made in 2018, defined Ethereum and XRP as "securities". We don't know how much his thoughts will change, but the court has previously accepted that ETH and BTC are not securities. And the co-classification between Ethereum and XRP could create a similar scenario for XRP by deploying ETH under a separate heading. Still, persistent SEC judges, who have a negative attitude towards Ripple, continue to put pressure on XRP.

The XRP / USD pair is not yet separated from the minor horizontal channel that sets the border at $ 0.44-0.49, the current price level is around $ 0.45. The channel middle band, which is at $ 0.46, is in a strong resistance position for the pair, and pricing below this level causes the current weak picture to continue. If it dips below $ 0.44, the image may become negative and accelerate the dips. However, as long as closings above $ 0.44 continue, the $ 0.46 level will open up first and then $ 0.49. 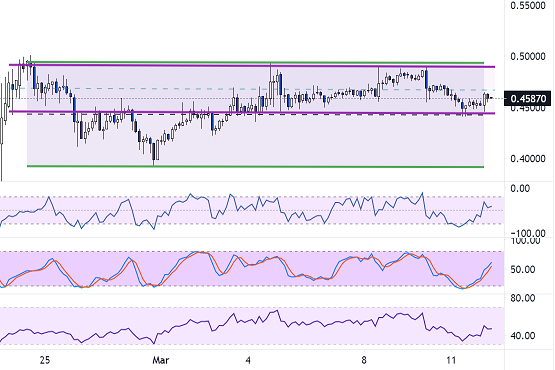 The LTC / USD pair has risen close to 4% this morning at $ 209. In general, the US incentive package in the market and the asset purchase program, which the European Central Bank will continue, may increase the supply of dollars and euros in the market in the medium-long term, and may cause the rise of crypto money here. We see that the market grows more slowly but surely taking less risk. For this reason, the withdrawals in the US session yesterday are reflected in our table this morning. However, Litecoin increased the return point difference between LTC and BTC as BTC came very close to the 58 thousand record. For this reason, a more accelerated increase on the Litecoin side for the short term will not surprise us. Grayscale is positive on Litecoin this morning as well, with 150 LTC purchases.

When the LTC / USD parity is analyzed technically, it is seen that the pair has experienced a steady rise on a daily basis, albeit with short-bodied candles. The major uptrend is continuing and the bullish reactions on this trend have previously provided more than 100% price gains. It is seen that the latest reaction that came on February 28 caused an increase of 40% yet and the upward potential continues. Candlestick closings above the $ 204 resistance can be traced, with $ 246 responses possible as long as the buying trend is strong. 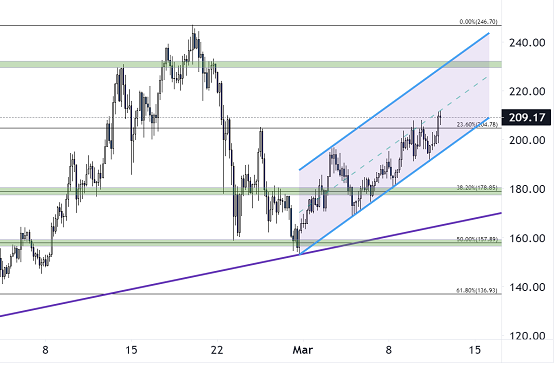 The LINK / USD pair retraced 1.4% this morning and has yet to push itself into the positive zone on a daily basis. Chain data continues to give strong signals for the pair priced around $ 29.75. The fact that the amount of smart contracts created on LINK maintains its momentum, the amount of LINK transferred from exchanges to cold wallets is increasing, and on the other hand, the test phases in development protocols for Ethereum continue to be positive for LINK on the basis of fundamental analysis.

LINK / USD parity created an uptrend as it increased its upward trend within the boundaries of the bullish channel and has been holding on to the trend levels as of February 28th. It can be expected that the $ 29.50 zone will be the trend support level and therefore the reactions above this level will carry the pair to the upper channel. With the break of the $ 29.00 level, $ 33.50 may come back on the agenda. 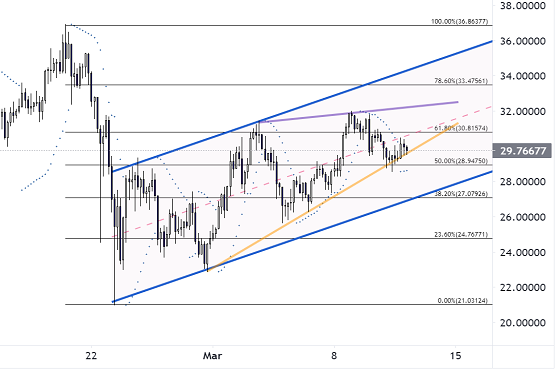