The Ripple community has launched a new petition calling on US Securities and Exchange Commission chair nominee Gary Gensler to drop Ripple lawsuit. The petition also wants that the motives of the former SEC chair Jay Clayton in targeting XRP over BTC or ETH should be investigated.

Having approximately $48.3 billion in assets (AUM) under its management, the hedge fund giant Millennium Management has invested in Bitcoin through the Grayscale Bitcoin Trust (GBTC).

Having $3.1 trillion in assets under its management, State Street Bank has announced that they are planning to provide cryptocurrency trading services towards the end of 2021 and shared their excitement about this initiative.

Bitcoin miners continue to accumulate BTC instead of dumping. BTC transfers from miners to exchanges have dropped 40% since March. The average daily transfers, which were around 450 BTC in mid-March, has dropped to 275 BTC.

First Deputy Governor Olga Skorobogatova has stated in a press conference that Russia’s Central Bank plans to test the digital ruble throughout 2022. Other sources, on the other hand, claim that state taxes are planned to be paid in digital rubles.

According to a press release on Tuesday, Fidelity, Square, Paradigm and Coinbase are forming a new lobby that wants to help shape the way bitcoin and other cryptocurrencies are regulated. The group is described as an "alliance of crypto leaders".

A lawsuit has been filed against hardware wallet provider Ledger and its e-commerce partner Shopify over last year's data breach. Some Shopify employees had accessed customer information by taking advantage of the vulnerability in Ledger in 2020.

China-based technology company Meitu has announced that it has invested another $ 10 million in Bitcoin. With this latest investment, the company's Bitcoin assets reached 940. The company also bought 31,000 Ethereum in recent weeks.

Bitcoin recovered from the $ 55,000 level it tested the previous day and rose again to the $ 58,300 levels. Despite the fact that it is a market without volume, we see that buyers are more concentrated, considering both the funding rates and the premiums of the funds. The amount of BTC exiting from exchanges continues to increase, miners do not sell Bitcoin in their pools and BTC amounts in wallets are not decreasing. It is seen that the general market has not entered a bear scenario yet, on the contrary, it is protecting the BTC in its hands.

When we consider the BTC / USD parity technically, the latest volume data show that the market is shallow and even the volume in futures is 60% of the March average. The hourly TOBO was completed with $ 57,700. BTC's minor uptrend from $ 50,000 and the descending trend from $ 51,800 is passing through the $ 58,400 and $ 59,100 levels. Closings of more than $ 59,000 for the weekend can trigger long positions, as they can positively affect buyers. The view is horizontal, shallow but positive. 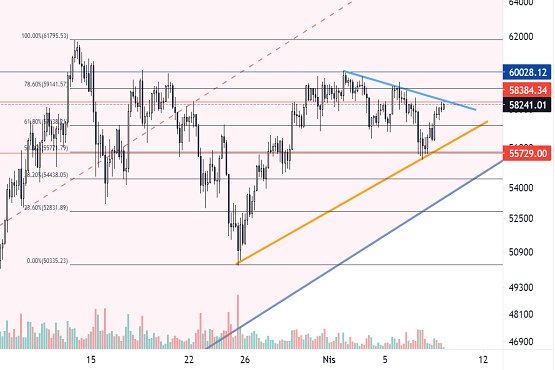 Ethereum is again experiencing horizontal pricing on Friday, with transactions above $ 2,000. The amount locked in Ethereum's door to DeFi rose to $ 51.8 billion again, and the market regained the amount it lost the previous day. Ethereum is still 12 points ahead in monthly performance compared to Bitcoin, although it is still 2.5% negative in the weekly period. It seems difficult for Ethereum to attempt a new record or stay above this level. Horizontal band movements are followed in the range of $ 2.060-2.100 under the effect of the voluminous market. On April 14, the Berlin hardfork is also expected to reflect positively on Ethereum.

When we consider ETH / USD technically, Ethereum is back on the uptrend, and it follows a horizontal motion between Fibo'61.8 and ‘78, 6, which corresponds to the band of $ 2,060 and $ 2,100. In ETH, where we follow the minor upward trend, the volumes are a little shallow, just like BTC. However, we welcome the market to buy back what it sells and the recovery of trends. 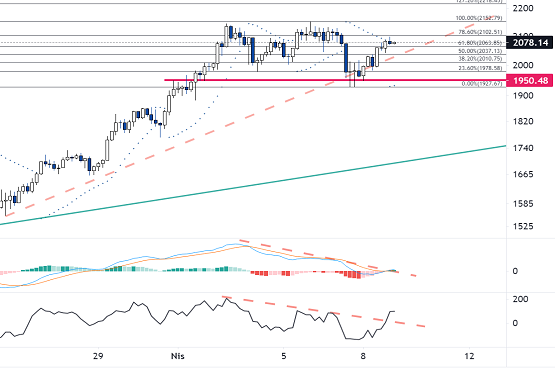 AVAX is pricing at $ 31.00 this morning, up 1%. AVAX, the token of the Avalanche network developed by Ava Labs, is 95% away from its record. With a market value of close to $ 4 billion, AVAX has a daily transaction volume of $ 188 million. On the other hand, about AVAX having no negative aspects on the basis of project and fundamental analysis, after its rapid increase, we see that it clings to its support while it is in the consolidation process.

If the AVAX / USD parity is taken technically, the pair continues to rise in the upward channel. The response from the $ 28.70 channel sub-band led to an 8% rise. Initial resistance for the pair is located above the $ 32.50 Fibonacci 38.20% retracement, and the break of this zone could bring the mid-channel zone back to the $ 35.50 zone. For now, the purchase volumes are expected to increase for the parity, which is horizontally moving, and then upward positive movements can be seen. 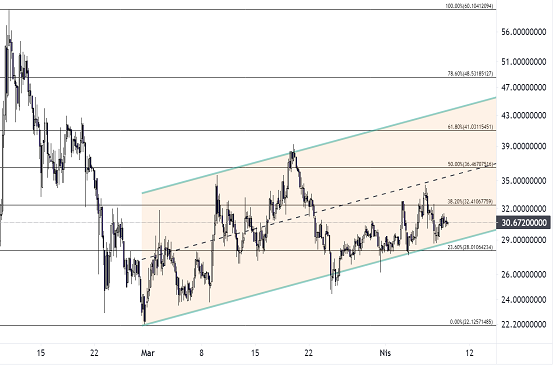 After the conference call between Ripple and SEC, it was stated that Ripple had won its first legal victory. Opening defenses will be made on April 12, and the SEC will conduct its detailed defense on May 14. Statements that will be positively interpreted by investors on various platforms by social media and the Ripple team continue.

Ripple is pricing around $ 1.03 this morning, with a 2.4% retracement. The course on the minor uptrend that started on April 7 gave its final reaction at the $ 1.00 level in the Fibo'61.80 retracement. As long as the $ 1.00 support level remains above the minor uptrend, the pair can continue to rise. On the other hand, the target zone of the created flag formation reaches around $ 1.50. In the short term, resistance will follow, with $ 1.06 first and then $ 1.11. 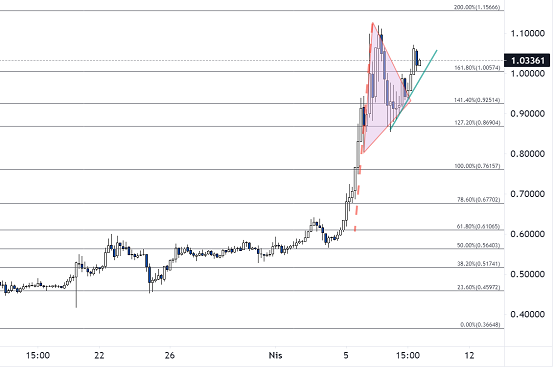 Litecoin is moving horizontally at $ 224 this morning. Chain data of Litecoin, which is much better than coins such as BTC, ETH and ADA in terms of performance in the last week, also supported this. However, active and new address numbers and the number of sending and receiving addresses confirm the final horizontality. In addition, reserve risk and average dormancy find the point where the price reaches a premium.

When we consider the LTC / USD technically, there were descending peaks in the $ 245 and $ 230 regions, but we are not talking about the double peak because it did not give a confirmation. On the chart of LTC, whose minor uptrend went above $ 207, this point is also a region that has come to the Fibo'50 slice and is very important for the continuity of the trend. While the outlook is horizontal for now, our main trend is bullish. 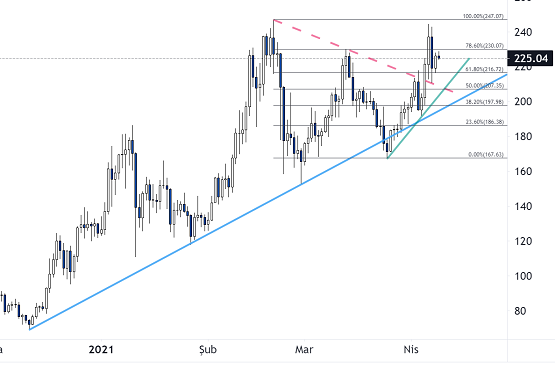 Chainlink is in the $ 30.70 region with a horizontal change this morning. After Grayscale added Chainlink to the Digital Large Cap Fund, we saw a rapid increase in daily transaction volumes and number of active and new addresses. In the last 24 and 48 hours, it is seen that the amount of LINK in the stock markets has increased. There is a decrease in the number of active addresses. LINK, one of the coins with the highest HODL ratio, is seen to be subjected to selling pressure by retail investors after short-term for-profit purchases. For this reason, although a horizontal course is possible for a period of time, we maintain our growth expectations for Chainlink in the medium-long term.

If the LINK / USD pair is technically handled, the pair maintains its upward trend and continues to rise with weak reactions from the support zones. Although the reaction on the $ 30.20 uptrend moved the pair to $ 32.00 and above, there is some retracement. Candle closes occur with short bodies and without volume in the 4-hour period. Closings above $ 32.50 and bringing this level to support could restrain sales pressures somewhat, allowing pricing of $ 35.00 to be tested again. The view is horizontal but the course is positive. 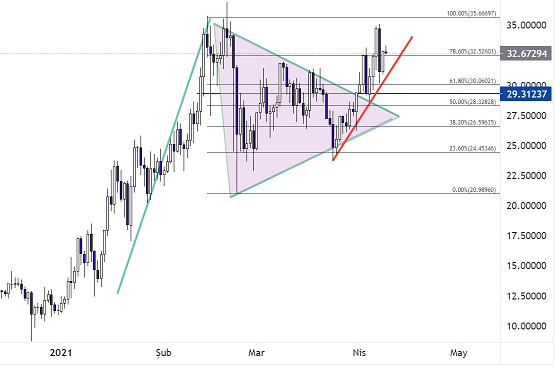 Basic Attention Token is priced at $ 1.26 this morning, with a 1% retracement. The pair, which is in the mid-lower zone of the bullish channel, tested the $ 1.28 zone, which is the mid-band of the channel, in its last reaction, but again faced some selling pressure. The $ 1.23 support zone is the first for potential sags and the $ 1.20 channel bottom is the main support level. Closings above $ 1.30 may increase the buying volume for BAT, which has been near horizontal for a while, and the upper channel may be reintroduced by $ 1.40. Although the decline in transaction volumes suppresses the parity to a certain extent, the positive movement continues in the rising channel in the medium-long term. 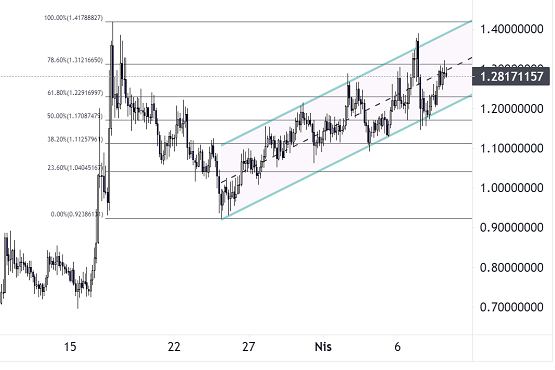